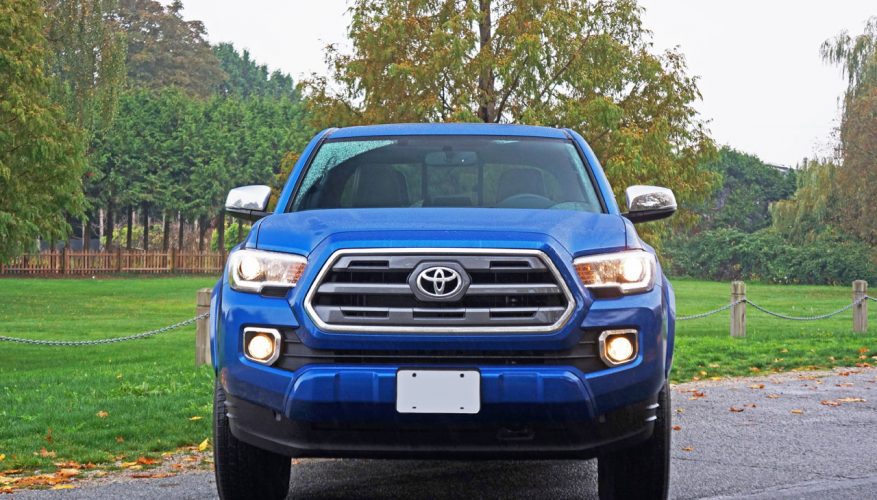 By: Trevor Hofmann
There are a lot of reasons why Toyota is number one in mid-size pickup truck sales, and while rugged good looks, capability, durability, reliability and owner satisfaction are indeed high up on the list, you can’t discount its longevity in the marketplace either.

The Taco, as fans like to call it, had its 20th birthday this year, arriving on the light truck scene in 1995, and that was after 20 years of Toyota truck brand building via the humbly named Pickup, while before that the HiLux filled the Japanese brand’s compact trucklet gap back to 1969, the Stout from to ’64, and of course the much-lauded and highly collectible Land Cruiser FJ45 was Toyota’s first North American truck entry in ’63. That’s 52 years of dutiful truck service.

The Tacoma didn’t run the full 20 years without a redesigned, but rather was updated in 2004 as a 2005 model, both iterations serving Toyota and its devoted truck fans very well. Now, 11 years down the line it gets another redesign for 2016, and while hardly groundbreaking it certainly looks good. The new Taco gets a much more interesting, edgier design thanks to a larger, bolder protruding grille, narrow squinting headlamps, and a forward thrusting front bumper, while its flanks and rear end styling are nicely tidied up, the latter now fitted with sharper taillights that meld into a sculpted tailgate, its lower extremities aligning perfectly with a curving rear bumper that gets finished with integrated top steps. Those who like their Tacomas should be happy with this evolutionary redesign, as it modernizes most every surface while not deviating one iota from its traditional pickup truck shape.

Before continuing I need to insert a caveat: the example I was testing was kitted out in top-line Limited trim. This not only made it much more comfortable inside, but some of the exterior bits just mentioned had been upgraded. For instance, the bigger more pronounced grille was trimmed in chrome, as were the fog light bezels, turn signal-infused mirror caps, and exterior door handles, while chrome side step bars made ingress and egress a lot easier. The Limited also adds LED daytime running lights to its halogen projector headlamps, plus a front air dam, and a sweet set of 17-inch machine-finished alloys with black painted pockets on 265/65R17 Firestone Destination rubber, while it makes it easier to access the cabin via proximity-sensing passive entry.

The interior is a marked step upmarket, with new soft padded stitched leatherette across the dash ahead of the front passenger, and across the back portions of the front and rear door uppers, both finished in a milk chocolate brown colour dubbed Hickory, a nice contrast to my tester’s Blazing Blue Metallic exterior paint and a perfect match to the Hickory brown perforated leather upholstery, the inserts of which are done out in a stylish square textured pattern. Yes, this certainly is no base Tacoma. As part of its Limited trim, attractive metallic surfacing surrounds a reworked primary instrument cluster centered by a crystal clear colour 4.2-inch TFT high-resolution multi-information display controllable via a diamond-shaped toggle on the right spoke of the textured leather-wrapped steering wheel, the same controller on the left used for audio functions.

As eye-catching as the gauges are, the beautiful new full-colour high-resolution seven-inch infotainment system atop the centre stack will likely command most peoples’ attention, at least initially, its high contrast screen and bright clear graphics as good as such systems get, whereas its host of Toyota Apps, including navigation and a very clear reverse camera, albeit without active guidelines, join Audio, Phone, Text Messaging, Eco, Setup and Maintenance pages.

Sitting between the two three-way seat heater controls is one of the slimmest two-zone auto HVAC interfaces in existence, this being the first dual-zone automatic climate control system ever factory installed in a compact to mid-size pickup truck. Three dials join it just below, these visually matching a 2WD, 4H and 4L selector to the left and an identically sized start/stop button next to that, all trimmed out with bright chrome edging.

The audio system is an upgraded seven-speaker JBL unit that sounds superb, and it gets all of the usual features such as AM/FM/CD/MP3/WMA, satellite radio plus aux and USB inputs, although you don’t need to use the USB to charge your smartphone if you’ve got a device that can utilize the Limited model’s Qi wireless charging system located under the armrest. The usual powered moonroof is overhead, with a much appreciated sunglasses holder in front of that, while the sport seats underneath are particularly comfortable, supporting in all the right places.

I took opportunity to spend some time in back, unfortunately not while the truck was being driven, but nevertheless the seats are also very comfortable for this category and the area surrounding extremely spacious, while the bottom cushions of the 60/40 split-folding bench can be individually flipped upward to reveal a hidden storage compartment, or you can remove the rear headrests, slot their two prongs into sets of holes on the back portion of those bottom cushions for safe stowage, and then fold the rear seatback completely flat for cargo you want to keep out of the elements. The seatback includes a plastic backing for a durable load floor, while the rear wall houses another set of stowage compartments that might be good for a small toolbox and maintenance equipment.

Back in the saddle, parking this ultra-long 5,727-mm (225.5-inch) Limited model is made easier thanks to clearance and backup sensors, while it also benefits from blind spot monitoring with rear cross traffic alert, the latter especially helpful when backing out of a hidden driveway. Once underway it’s easy to experience the difference between the outgoing 2015 Tacoma and this 2016 model, at least when fitted with my tester’s new 3.5-litre V6.

Yes, the 4.0-litre V6 is finally dead and buried as far as Tacomas go, the new 500-cc smaller displacement design boasting Atkinson-cycle technology, which is usually the stuff of Toyota hybrids. The engine also includes Toyota’s D-4S technology that utilizes both direct and port fuel injection for stronger acceleration and improved fuel economy, the former thanks to 278 horsepower and 265 lb-ft of torque and the latter resulting in an estimated 13.1 L/100km city, 10.5 highway and 11.9 combined as-tested. That’s very good for this class, by the way. As a comparison, the much lighter Access Cab RWD base truck, which uses the same 2.7-litre four as last year, isn’t much better at 12.0 L/100km city, 10.0 highway and 11.1 combined when mated to the same six-speed automatic.

The gearbox is smooth and quite seamless for a truck, fitted with manual mode and a good companion to the relatively smooth and comfortable chassis. Of course, this is a 4×4-capable truck so don’t expect to be wowed by an Avalon-like ride, but I certainly wasn’t made uncomfortable during my weeklong test, while the Tacoma Limited is also quite quiet for its segment. It also tracks wonderfully on the highway and wasn’t too shabby through the curves either, the Tacoma having always been one of my favourite pickup trucks to course through a winding back road.

That road would’ve been even more enjoyable if covered in dirt, but as life would have it I never had opportunity to test the Tacoma off pavement, let alone push the truck’s on-demand 4×4 drivetrain to the extremes it was ultimately designed to be taken to, so I’ll rely on personal off-road experience with previous Tacomas and that 52-year truck and Land Cruiser heritage mentioned earlier (not to mention many more decades in other markets prior to arriving here, the son of Toyoda Automatic Loom Works, Kiichiro Toyoda, building the first G1 in 1935 that, along with the A1 passenger car would soon after result in the forming of the Toyota Motor Co. as we know it; Toyota still makes automatic looms, incidentally).

Taking advantage of untoward conditions in mind, the Tacoma comes standard with a heavy-duty battery, starter, alternator and heater, plus a stainless steel exhaust system, while specific to off-roading, it gets a two-speed transfer case engaged via a one-touch dash-mounted controller that quickly lets you switch in and out of 4WD, while an automatic disconnecting differential helps when oscillating through deep ruts and tall rocks that require more suspension travel than would otherwise be possible.

Off-road fans will take heart that rear drums are even fitted to this top-line truck, and those who have experience trekking through god’s country will also appreciate all the electronic aids that come standard with this truck too. Just like ABS, traction and stability control benefit on-pavement safety during inclement weather, they can be extremely helpful through snow, mud, sand and gravel, especially when taken at a rapid rate, while Toyota also includes electronic brake-force distribution and emergency brake assist, Smart Stop Technology (SST) that limits engine power during braking, front seatbelt pretensioners and force limiters, adjustable B-pillar shoulder belt anchors that also improve comfort, a front tow hook for getting yourself (or someone else) out of those “oh crap” situations, and eight standard airbags including front knee blockers for when things really get bad.

Along with Limited features already noted, some items pulled up from lesser trims include a sliding rear window, a double-wall composite (SMC) cargo bed, a removable locking tailgate with Toyota’s Easy-Lower feature, a rear step bumper (although steps cut out of the corners like some others are now offering would make stepping up to the bed a lot easier when the tailgate is lowered), cargo bed tie-downs, four tie-down cleats, door scuff plates, variable intermittent wipers, heatable powered side mirrors, tilt and telescopic steering, Bluetooth hands-free phone, voice recognition, two 12-volt DC accessory power outlets, and more. The base Tacoma starts at a very reasonable $27,995 plus freight and pre-delivery prep, while my full-load Limited hits the road at $44,375, not bad at all considering everything included.

All in all the redesigned 2016 Tacoma appears to be exactly what’s needed to keep Toyota truck fans faithful for another decade, although considering some of its recent competition the Japanese brand may want to update its popular pickup more often moving forward. Still, with its many improvements the new Tacoma is once again best in class, and a short list must-drive if purchasing a new mid-size pickup truck.
©(Copyright Canadian Auto Press)
Car Shopping Tools