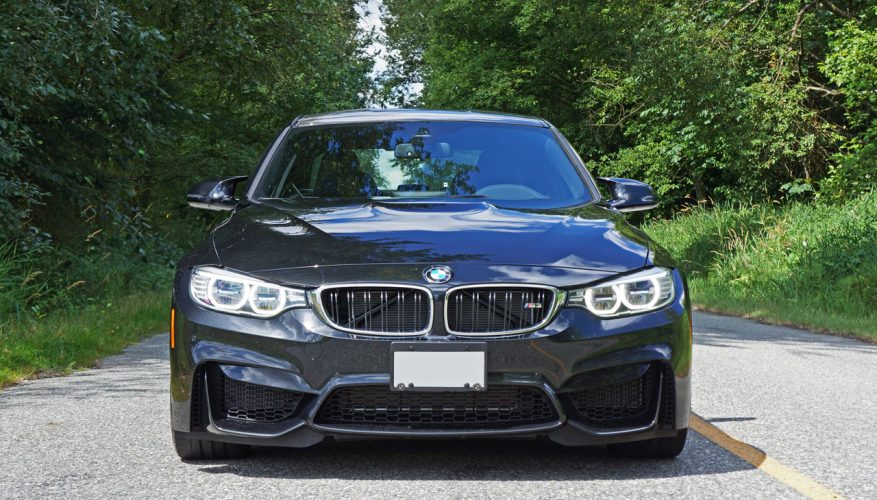 By: Trevor Hofmann
In case you were wondering, it takes a considerable amount of time and effort to test, research, and finally write a review on a given vehicle. And that doesn’t even take into consideration the team needed to schedule, book, pick up, shuttle around and drop off the test car, source a location and then shoot a gallery of photos, the additional team required to edit those photos, size and optimize them for the web, edit the review, and finally file it to various print publishers while posting it to the content management system for online distribution ahead of promoting it via various social media sites. So why on earth would anyone in my line of business cover the same car twice in a single model year? When that car is quite possibly the best sport sedan ever created.

Yes, it all comes down to personal gain. My gain, in this instance, was more time spent in yet another 2015 BMW M3. Sure this has cost me and my company time, effort and money, because it really wasn’t necessary. My readers are likely happy with the gorgeous Yas Marina Blue Metallic painted example I covered in October last year, but I can’t see any complaining about me revisiting this preeminent powerhouse once again a year later, especially considering how good it looks in Black Sapphire Metallic. Yes, it would’ve been better if I’d been able to test one with a six-speed manual, just for the sake of variety, but alas, right hand and full arm engagement was only experienced with the 2015 M4, my two stints in the M3 merely exercising the fingertips via aluminum steering column paddles.

Hey, I’m not complaining. Where the previous M3 had me coursing up a mountain towards a favourite local West Vancouver ski hill, pre-snow mind you, this kick at the carbon-fibre can was done along the serpentine riversides of the Fraser Valley, amid lonely two-lane straights and otherwise scary off-camber 90-degree corners, trees, farms, ditches, creeks, rock faces, and of course those rivers alongside. It’s not like a complete lack of runoff area disturbs me when in the comfortably supportive driver’s seat of an M car, however. Certainly, if attempting the same feat while nervously gripping the wheel of a first-gen Dodge Viper ACR I’d be wise to increase my life insurance policy, but most any generation of M3 is a wholly different kind of supercar, meaning one that you don’t need to have an FIA Super License to commandeer without fear of impending death.

When I wrote about this new M3 earlier, I went into detail about how it’s a standalone model and there’s no longer an M3 Coupe, yadda yadda yadda, but this is all old news now, with most Bimmeristi, excepting a few, fully in acceptance of a name change that has only ever made perfect sense. At least these purists were able to relish in the new M3/M4’s straight-six powerplant, replacing the absolutely brilliant 4.0-litre V8 that, while one of the most impressive of its type ever created was never as historically faithful to BMW’s heritage as this new 3.0-litre six-cylinder mill. Then again, BMW history buffs will know that the first M3 was a turbo four, followed by a bevy of beautiful sixes and finally the modular V8 just noted, so now having this best-of-both-worlds combination of inline-six and turbocharged, intercooled performance before us has to be about as good as it gets.

OK, I still admit that I miss the old V8’s rev-happy personality and of course the sonorous combination of precision mechanicals up front and small-displacement V8 howl out back, but the throatier rasp of this six has its own merits. While it sounds rougher around it’s edges, even after BMW applied new Digital Motor Electronics (DME) for enhancement, which combines a mix of engine and exhaust notes, a digital processor, and the car’s Harmon/Kardon audio system to make your spine tingle, it’s a sophisticated piece of kit, with Valvetronic variable valve timing, a forged crankshaft, a lightweight magnesium oil pan and a track-prepped lubrication system keeping things oiled up no matter the G-forces presented, and while inline sixes are normally heavier than V8s, BMW managed to lop 10 kilos (22 lbs) from the new engine’s mass along with additional weight removed from the more intelligent transmissions, both of which boast auto start/stop systems too, along with the previous car’s brake energy recovery system to help keep claimed fuel consumption to 13.7 L/100km city, 9.0 highway and 11.6 combined for the manual or 13.9, 9.7 and 12.0 with the auto.

I could go into detail about the new M3’s impressive 85-kilo (187-pound) diet, its weight now a comparatively svelte 1,605 kilograms (3,538 lbs), and talk about its stronger and much lighter F1-style single-piece carbon-fibre driveshaft, and of course its new carbon-fibre roof panel that does as much to lower the M3’s centre of gravity as it does to wow the uninitiated, or babble on about its lightweight CFRP composite trunk lining, or open its aluminum hood and show you its fabulous CFRP strut brace, but mention of these details and other weight saving, rigidity increasing materials and processes, plus my rambling on about just how unique this upgraded car is compared to the regular 3 Series sedan, with 70 percent of the M3 completely exclusive kit, would only keep me out of the driver’s seat and this review off the road, pavement being where all of these parts come together to form a summary of great passion and purpose, unfathomable performance.

That lighter twin mono-scroll turbocharged engine makes a sizable 425 horsepower at 5,500 rpm and 406 lb-ft of torque at 1,850 rpm, numbers that sound impressive on their own but mean a great deal more when compared to the outgoing car. The old V8 made almost as much power at 414 horsepower, although you needed to rev it to 8,300 rpm to extract all its goodness, something I didn’t mind doing, of course. Likewise the V8 needed 3,900 revolutions per minute to achieve its much lower 295 lb-ft of torque, whereas the new six creates four-hundred-plus at just 1,850 rpm. This, plus its aforementioned weight loss are reasons enough for a much speedier 4.1-second sprint to 100 km/h, compared to 4.9 in the old car.

While I previously lamented the exclusion of a six-speed manual in this particular tester, the seven-speed M-DCT dual-clutch gearbox has its pluses. First off that sprint to 100km/h is made quicker, the manual needing 4.3 seconds to achieve the same velocity. Secondly, there’s no possible way you can run through the gears as quickly, even if you’re a pro. Third, when driven where most of us live, on highway, byways and thick within gridlock, nothing could be easier than slotting the transmission into D and letting it find its own way, which when in the latter confinements may include shutting the engine down whenever it wants to save fuel and curb emissions, or otherwise when out on the highway it may include having its standard adaptive cruise control take over some of the driving, allowing you to arrive more relaxed.

Before I put you to sleep in rear seat 7 Series executive lounge splendor, let’s remind ourselves we’re in an M3, a vehicle designed to be driven, not driven in. For optimal results, set the driver selectable mode to “M Dynamic” at which point the normal DSC restraints are unleashed to provide more kickass fun, the M’s slender yet fat 19-inch Michelins combining with a wonderfully sorted suspension for otherworldly get up and go, the rears gripping with relentless tenacity unless provoked otherwise, at which point they’ll gladly give up their hold and let this 3’s tail wag like a feisty black border collie, capable of turning on its hind legs in an instant, aided via 380-mm front and 370-mm rear drilled and vented rotors, and totally poised no matter the state of tarmac underfoot.

Likewise it’s an impressive highway cruiser, whether enjoying the sights at the posted limit or making haste to a meeting, there’s no more stable companion to get the job done, while its ride is firm yet not overly so. Of course, if you’re used to the back seat of that 7 you may be in for a reality check, but the M3 is hardly jarring unless the road surface is rougher than average.

All-round livability is what makes any four-door M popular, the M3 just one of three currently on offer, the other two including the M5 and M6 Gran Coupe. I’ve tested them all, and while one would think this comparatively well priced $74k M is the least impressive compared to the $101,500 M5 and $129,000 M6 GC, it’s my favourite. Maybe that’s because it’s the most likely to ever enter my personal fleet, but it also has to do with its relatively compact mass and commensurately tossable nature. That it comfortably seats four adults or five in a pinch, stows a substantive 450 litres (15.9 cubic feet) of life’s gear in a trunk that can be expanded 60/40 via split-folding rear seatbacks, and it all makes a great deal of sense. Really, the only way to make the M3 fit my lifestyle better would be to stretch that CFRP roof a couple of feet more in order to cover the top of an M3 Touring, but that’s a bit of fantasy I’ll likely never see created, at least not from the factory.

As it is, the M3 remains one of the most impressive four-door sport sedans current available. It’s outrageously potent, yet still comes packed full of luxuries in a cabin that few rivals come close to measuring up to. My tester’s interior highlights included dark grey glossy carbon-fibre inlays, a mere $500 of paycheck well spent, while piano black lacquer or aluminum is also available, not to mention a host of woods for earthier types. The meaty steering wheel is a perfect fit for any performance enthusiast’s hands, finished in the highest quality leather and stitched together with the M brand’s classic blue and red colouring. Simple white on black dials make up the gauge package, highly legible and ideally organized, just like the perfectly placed paddles I mentioned earlier. The M’s contoured sport seats are some of the more comfortable yet most supportive available, my tester’s skinned in black perforated leather with sweet looking metal “///M” badges on their backsides that even come to light at night, while all of the other details, such as switchgear and plastics quality, is finished to BMW’s usual higher than average quality.

As I’m sure you can now appreciate, my second stint in the M3 was worth every penny of added cost to my business’ bottom line, plus all of the time and effort it took me and my team to pull everything together. Any time spent with an M3 is time well spent, whether the outgoing V8-powered model, a classic E30 turbo-four variant, a wonderful ’94 Euro-spec E36 that left my memory indelibly stamped forever, or this best-of-the-beast 2015 iteration. You can spend a lot more for a sport sedan, but you won’t buy any better four-door.
©(Copyright Canadian Auto Press)
Car Shopping Tools