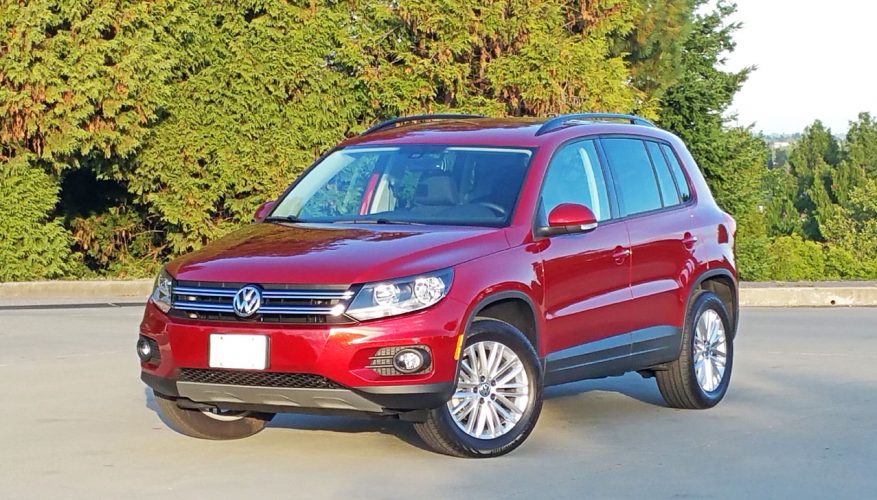 By: Trevor Hofmann
The Tiguan typifies the “cute ute” genre. It’s hardly sleek, with a stubby shape that results from abbreviated length and comparatively tall height, giving it a cute, cuddly and dare I say pudgy look, the baby penguin of the CUV class. VW dresses up its front end with a nice classy chromed grille, mind you, with horizontal ribs to add visual width, as well as fog lamps and a stylish silver under tray down below, while it gets tough looking black cladding around each side, attractive multi-spoke alloys at all four corners, a simple roof top spoiler and relatively small, clean LED taillights at back. It’s not a standout design, but it looks good in VW’s usual understated way.

Inside it’s an entirely different story. Unlike most in the Tiguan’s compact crossover SUV segment, VW’s entry combines a soft-touch dash top that wraps halfway down the instrument panel with soft-touch front door uppers, while the lower half of the IP is hard matte plastic just like the Audi Q3 that shares its underpinnings, drivetrain and most everything else below the skin. The Tiguan doesn’t pad the lower portions of its doors like the Q3, these made from a harder plastic, but those soft synthetic uppers and the woven cloth inserts just below are plenty nice, while matching the slightly softer armrests and seat bolster material ideally, the seat inserts patterned with squiggly white lines that’ll make your eyes go buggy if you look too closely, but again they’re attractive enough from a reasonable distance.

As is usually the case with VW, all switchgear is nicely fitted and well damped even though some of the plastics used to make the various buttons, knobs and dials aren’t up to the quality standards the German brand was previously respected for, or for that matter the level that many of its mainstream volume branded competitors achieve now, feeling cheaper and more hollow than before. The Tiguan also doesn’t feature fabric-wrapped A-pillars, unlike most other VWs, so together with the lower rent switchgear, its lack of rear soft-touch door uppers and other less appealing finishings, VW has handed the best-in-class perceived quality baton off to Hyundai with its impressive new Tucson and Jeep with its Cherokee, amongst others.

Entry to my Special Edition 4Motion tester, which is new for 2015 and is priced between base Trendline and mid-priced Comfortline trims at $29,998 plus $1,760 for freight and pre-delivery prep, comes via proximity-sensing passive access, while engine ignition begins with the push of a start/stop button on the lower console. Other details include dual-zone automatic climate control that’s ultra-easy to use, while I like that you get four centre vents and two at each side to direct air almost anywhere front occupants could want it, while three-way heatable seats are upscale for the class and therapeutically hot in their third position.

That last item gets pulled from the base model’s Convenience package, while other items added to the Special Edition from this package include roof rails, rear privacy glass, rain-sensing wipers, a leather-wrapped multifunction steering wheel and shift knob, an auto-dimming rearview mirror, and VW’s media device interface. Additionally, this Special Edition gets nice looking silver-finished multi-spoke 17-inch alloys, plus auto on/off headlights, an infotainment system featuring a high-resolution colour touchscreen display with an integrated rearview camera, and an AM/FM/satellite radio connecting through to a classic six-disc CD changer and aux plug.

The eight-speaker audio system’s sound quality is excellent, but where is the standard USB? VW is still shipping 30-pin iPhone/iPod connectors, so you’ll need to pay extra if you’re using one of Apple’s “new” eight-pin devices or, heaven forbid, any alternative smartphone such as, an Android? I had always assumed that VW was in bed with Apple, as they’re the only auto manufacturer that doesn’t ship all of its cars with USB inputs, but now that the automaker has unveiled a new Apple designed infotainment system for the 2016 Tiguan and other models, this assumption appears real, which of course leaves the majority of North America’s smartphone users wondering how well their Androids will sync. Getting back to this 2015 version, my Samsung Note 4 paired up to VW’s older infotainment system just fine, but there was nowhere to charge it. I keep saying that VW needs to get with the tech program, which currently has more than half of North American buyers using Android phones, with the trend growing in the Google-owned system’s favour, so hopefully the 2016 model will at least ship a standard USB MDI adapter cable along with an updated eight-pin Apple dongle, instead of forcing their buyers to pay another $50-$100 just to plug in their phones. Or an even better idea, just reduce the wholesale price of their cars enough to allow dealers to pull whichever MDI adapter cable a point of sale customer requests from their parts departments, so that every new VW buyer gets a customized bespoke treatment at no extra cost to the corporation. Considering its current state of affairs, VW should be thinking about how it can be as agreeable to as many potential buyers as possible.

Features in mind, all Tiguan customers get a host of standard goodies to enjoy, the items that get grandfathered up to this Special Edition including a chromed grille, fog lights, powered heatable side mirrors, an electromechanical parking brake, a multifunction trip computer, an exterior temperature gauge, cruise control, air conditioning, an overhead console with a sunglasses holder, a flat-folding front passenger seat for accommodating longer cargo, 60/40 split folding, sliding and reclining rear seatbacks, front and rear floor mats, plus more. Options include a $995 navigation package with a 30-gig hard drive and a large powered panoramic glass sunroof for $1,400.

The standard eight-way manually adjustable front seats are very comfortable, offering up traditional German firmness with good lateral support. This is good as the Tiguan drives better than most in its class, delivering a good balance between better than average handling and a very compliant suspension. It should be impressive on the road, of course, as it’s basically the same setup used by the Audi Q3, and four-ringed customers expect a lot.

Ditto for the direct injected and turbocharged, DOHC, 16-valve 2.0-litre four under its hood, an engine that’s good for 200 horsepower and 207 lb-ft of torque, the latter fully available from as low as 1,700 rpm, allowing the little Tig to light up its tires off the line. Base Trendline models come standard with a six-speed manual, but the Special Edition includes a smooth and efficient six-speed automatic with Tiptronic manual-mode as part of the upgrade, which goes about its business almost unnoticed and can’t be faulted other than its tendency to shift sooner than some sport-minded drivers will likely appreciate in an effort to save fuel, while its standard 4Motion all-wheel drive delivered excellent grip in the wet.

I’ve mentioned that the front seats are comfortable, but neglected to note the overall size of the front driver and passenger area. First off, the Tiguan’s aforementioned tall body style helps to give it good headroom, allowing comfort for taller folk, while most body types should also find plenty of hip, shoulder and elbowroom. Rear seating roominess is even better, while the seatbacks feel good in all the right places, especially the lower back. VW provides a centre armrest when three’s a crowd, which includes dual cupholders.

When it comes time to load in cargo the Tiguan’s rear seatbacks need to be folded down via little webbed finger pulls at the base of each back cushion, and unlike some of its rivals they don’t tumble flat in one single fluid movement either, but their mechanisms are very well made with everything fitting together perfectly when they snap into place, at which point folding floor extenders cover the gap between the seats and load floor, laying completely flat unlike some others that offer this feature. Putting the seats back up requires a fair bit of effort and even then they’ll lock into place at an awkwardly upright right angle, which would be terribly uncomfortable to sit in if attempted. You need to keep pulling on the tab while lining up the seatback’s rake the way you want it, the process completely manual compared to most others. By the numbers, there’s 674 litres (23.8 cubic feet) of volume when the rear seats are upright and 1,588 litres (56.1 cubic feet) when laid flat, while you can stow a 2.5-metre (8.2-foot) long item when the flat-folding front passenger seat is lowered.

Yes, the Tiguan is plenty practical, although it’s not as large as most of its compact competitors. Then again its quite a bit bigger than its subcompact rivals, filling that grey space in between and doing a mighty fine job of it, especially if you like the combination of light weight, agility and power. I happen to fall into this last camp, and therefore have always had a soft spot for the little Tig. This Special Edition, which continues forward into 2016, combines some of the model’s most popular features into one sub-$30k package, so it should continue to be one of the better sellers within the Tiguan lineup.
©(Copyright Canadian Auto Press)
Car Shopping Tools