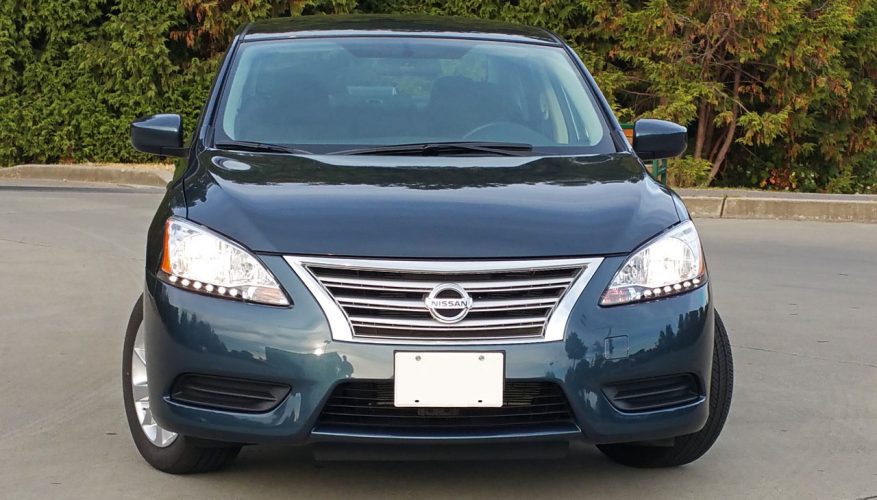 By: Trevor Hofmann
Nissan does a lot of things very well, but in the compact arena most competitors completely outplay the Japanese brand. First off, its Sentra only comes in one single four-door sedan body style within a segment dominated by hatchbacks, at least here in Canada. Some of its rivals also offer two-door coupes and even two-and-a-half-door whatchamacallits, so Nissan is seriously limiting its sales opportunities. Its competitors also draw big attention from flashy sport-tuned models, the Sentra being one of the more sedate cars in its class.

This is rather odd considering that Nissan has a heritage rich in performance cars, the Sentra SE-R still sought after by sport compact collectors, especially in top-tier Spec V trim. For reasons only global-boss Carlos Ghosn and company can explain, there’s no SE-R in today’s Sentra lineup, let alone many sport-oriented models within Nissan’s entire small car segment, other than the commendable Micra (when outfitted with its base manual gearbox), particularly zippy Juke Nismo RS AWD, and the much revered 370Z, which gets our firm nod of approval and is now more affordable than ever (when its new $30k-something price is adjusted for 40-plus years of inflation). Yet as good as the Micra, Juke and Z are, none fit into big volume segments on this side of the Atlantic, Pacific or Caribbean, leaving the Sentra’s quiet, understated and dare I say meek presence all alone in a whirlwind of compact hyperactivity.

This results in annual Canadian sales that barely managed to sneak over 15,000 units last year and look to do similar for 2015, which at first glance doesn’t seem so bad. But we’re talking Nissan here, Japan’s number-three carmaker (they used to be number-two) and along with parent/partner Renault one of the more powerful players in the global automotive scheme of things. To put Sentra sales into perspective, Honda sold more than 66,000 Civic sedans and coupes in our country last year, while Toyota came in second with just over 56,000 Corolla/Matrix sales (I should really include Scion tC numbers in this tally too, but they were nominal). Comparative upstart Hyundai managed third with almost 54,000 Elantra sedans, coupes, GT hatchbacks and Velosters, whereas Volkswagen took fourth with more than 45,000 combined Jetta, Golf, GTI and Beetle sales (and while Golf sales are way up this year their recent problems will no doubt kill off any gains). Mazda (a small global player compared to Nissan) was fifth in this compact segment with nearly 41,000 Mazda3 sedans and hatchbacks sold, and Chevy sixth with more than 34,000 Cruze four-doors delivered, while Ford was seventh with just over 22,000 Focus sedans and hatchbacks, and Kia ninth after just missing out on hitting 12,000 Forte sedans, coupes and hatchbacks. No, I didn’t forget the Sentra that slots in just above that Kia in eighth place, while comparatively niche market Subaru came pretty close to both cars by breaking the 10,000 unit threshold with its Impreza, Dodge didn’t fare so well with just 8,000 Darts, and Mitsubishi only got halfway past the 6,000 unit mark with its aging Lancer.

Compared to these last three compact entries Sentra sales look pretty decent, but factor in its three Japanese competitors, one of the Koreans, its sole German rival, plus two of the domestics and these results should be a smelling salts style wakeup call to the once dominant compact car manufacturer. I’m old enough to remember the Datsun 510, a car still revered and respected for both its mechanical durability and handling capability on road and track, while that Datsun brand and the global Nissan nameplate that eventually followed created many more sales chart winners.

The current Sentra hasn’t changed much since this seventh-generation model was introduced in 2012. It still wears its shrunken-Altima look, with a classy chrome-trimmed grille, upright body style, curvaceous shoulder lines, and jeweled taillights, but these are now LED-enhanced like the headlamps, the latter getting a line of signature LEDs that run along each light’s lower extremities. There are no fog lamps or mirror-housing turn signals with my tester’s SV trim, but lots of chrome on the door handles, around the side windows and trunk garnish. The wheels are 16-inch alloys wrapped in 205/55 Bridgestone Turanza all-seasons, and they look nice enough, but those in the rear expose big black drum brakes. I know drums are par for the course with most compacts in entry-level trim, but they don’t do the car any service from a styling perspective.

They certainty didn’t affect the way the car stopped, or maybe that had more to do with how I drove it. Despite the surprising inclusion of my test car’s six-speed manual, the Sentra doesn’t feel all that sporty, so I spent time behind the wheel more conservatively than I might with some of its rivals. Its standard 1.8-litre four-cylinder engine puts out just 130 horsepower and 128 lb-ft of torque, not much to get the spine tingling with excitement unless you’re trying to accelerate away from danger, but on the positive when it gets fitted to the optional CVT it’s good for a claimed 8.0 L/100km city and 6.1 highway, although even my six-speed’s 8.9 city and 6.6 highway rating is respectable.

I’d say fuel economy is the Sentra’s strong point, not a very sexy attribute to sell on, but important in this segment just the same. The car handles well enough too, its front strut and torsion beam rear suspension setup being average for the class, albeit some others step up with independent rear suspensions and others with standard rear discs, the Sentra forcing buyers to move up into its pricier trims to get better back binding power.

I like that the Sentra boasts standard driver-selectable performance modes, however, which include Eco, Normal and Sport, and while Sport mode does enhance the driving experience it wasn’t enough to make me reminisce about the SE-R. I therefore left it in Eco most of the time, as I might as well save as much fuel as possible.

ABS, electronic brake-force distribution and emergency brake assist are part of the Sentra’s standard safety kit, but I don’t know of a vehicle currently sold in Canada that doesn’t offer these. Its standard traction and stability control are also par for the course, as are its six airbags, although Nissan redesigned the side-curtain airbags for this 2015 model year and also reworked the car’s front end framework, its A-pillars, and the doorsills in order to increase structural rigidity, which helped this latest Sentra score well in the tougher new small front-overlap crash test and therefore earn a Top Safety Pick from the IIHS. It only earned four out of five stars in the NHTSA’s crash tests, however, do to weaker frontal and rollover tests, while a full five stars was granted for side-impact.

Another safety bonus is standard tire pressure monitoring, while my SV-trimmed tester receives upgraded TPMS with an Easy-Fill tire alert system that actually honks the horn when the correct tire pressure has been achieved.

Another way the Sentra shows up many of its rivals is in interior roominess, its back seat allowing room enough for kids to grow into big teens and then some, while its 428-litre (15.1 cubic-foot) trunk is also larger than most direct competitors while providing standard 60/40 split-folding rear seatbacks.

My SV starts at $18,698 with the as-tested manual plus another $1,300 for the CVT, while it adds standard air conditioning no matter the transmission, plus premium cloth upholstery that was very attractive. I should first mention Nissan has significantly pumped up the SV’s standard feature set for 2015 to include those 16-inch alloys mentioned earlier, proximity-sensing passive access with pushbutton ignition, auto on/off headlamps, a leather-wrapped steering wheel and shift knob, an auto-dimming rearview mirror, heatable front seats, a 5.0-inch infotainment system with a backup camera plus integrated NissanConnect apps, Bluetooth streaming audio, hands-free text messaging, and satellite radio, plus the aforementioned Easy-Fill tire alert.

While it would’ve been nice if included, Nissan’s Luxury Package only comes with the CVT. Just the same its slightly larger 5.8-inch touchscreen infotainment with navigation and upgraded eight-speaker Bose audio would no doubt enhance the Sentra’s classy cabin, as would its illuminated vanity mirrors and powered glass sunroof overhead.

And yes, it is a classy cabin. I wouldn’t go so far to say Nissan wins a best-in-class award for interior refinement, but it’s better than some competitors with a nice soft-touch dash top that flows right down the instrument panel ahead of the front passenger, although the door uppers are hard plastic unlike some of its rivals. Just the same, comfortably padded woven cloth-covered door inserts and armrests improve its lot, the latter contrast stitched to match similar detailing in the upgraded fabric seats. Nice brushed metallic surfaces abound too, the Sentra posing quite a stylish interior even in this mid-grade trim.

While I didn’t test these others, the Sentra’s two additional trim levels deserve mention. The first is dubbed SR Premium at $23,398, and despite receiving sportier equipment such as new-for-2015 rear disc brakes, as well as carryover 17-inch alloys, a sport grille, fog lights, an aero body kit with sill extensions, a rear deck lid spoiler, chrome exhaust tips, sport cloth upholstery, and silver sport interior trim, it only comes with the hardly sporty CVT. Additional new-for-2015 SR Premium features include standard passive access with pushbutton start, a leather-clad steering wheel and shifter, the larger 5.8-inch infotainment display with all its upgrades, and heatable front seats, while a powered sunroof and other items get carried over.

For those who want a premium experience the SL adds leather upholstery, woodgrain trim, and dual-zone auto HVAC inside, while the exterior gets dressed up with classier 17-inch alloys, LED-infused side mirrors, chrome window surrounds, chrome door handles and a chrome trunk garnish.

As far as gripes go, I only have one, and oddly it’s regarding a feature that I normally count as a bonus. The Sentra gets an overhead console-mounted sunglasses holder that’s unfortunately rendered mostly useless by an unusually wide and sharply angled bridge rest that doesn’t fit the front frame of most glasses. I’ve got a wide assortment of sunglasses from Maui Jim, Oakley, Persol, Ray-Ban, Revo, Serengeti, etcetera, and while I don’t expect my wraparound Oakley sport glasses to fit within any vehicle’s holder you’d think my regular old wire rimmed Ray-Bans would, right? Wrong. My Serengetis are even smaller wires, but they don’t fit properly either. Most competitors that offer sunglasses holders pad their insides sufficiently and don’t bother with a bridge rest at all, so therefore pretty well any regular pair of glasses will fit inside without issue. This unpadded one doesn’t make any sense at all, making me wonder what the mastermind behind this particular design looks like. Does he/she have a schnoz the size of an avocado? This eccentricity isn’t specific to the Sentra either, but shows up in other Nissan vehicles and even some Infinitis. Someone at Nissan, please explain.

Rather than sign off during a rant, I’d like to wrap up this review with something positive. Remember those better selling competitors that I mentioned near the beginning of my remarks? Well, the Sentra tied with both the Hyundai Elantra and Toyota Corolla for highest-ranked compact car status in J.D. Power and Associates 2015 Initial Quality Study (IQS). Again, quality might not be sexy, but neither is sitting at the side of the highway waiting for roadside assistance to arrive.

True, while the Sentra didn’t leave me begging for more I must admit that it’s a very nice little car with a surprisingly big interior. It’s well made, very comfortable and extremely well equipped, and I can easily recommend it to anyone wanting safe, reliable transportation. When my teenage son is old enough to drive, this is the car I’d like to see him in. No, not an SE-R Spec V. A nice sedate Sentra SV, preferably with the CVT. If this is the way you like to drive, I highly recommend Nissan’s impressive Sentra.
©(Copyright Canadian Auto Press)
Car Shopping Tools