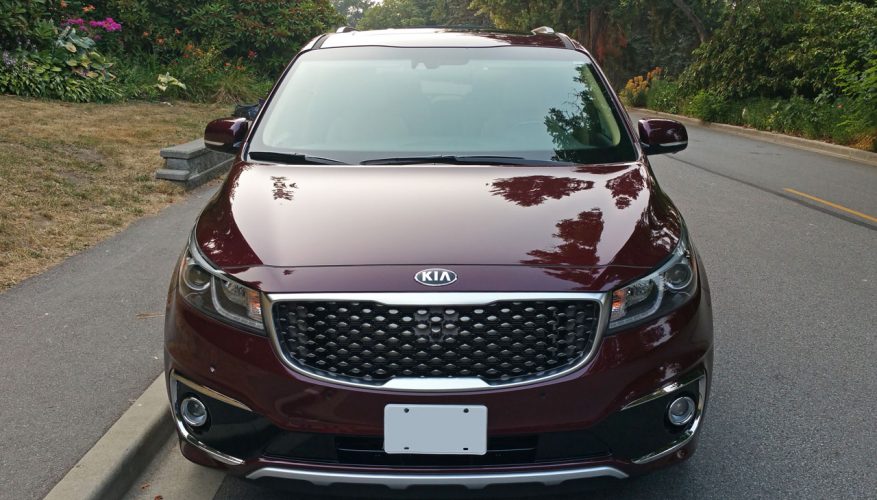 By: Trevor Hofmann
Kia entered the minivan segment back in the early aughts when many others were getting out, and to its credit the South Korean brand has won a lot of sales that GM and Ford have missed out on. The first generation was a decent van, plenty powerful and quite roomy, but it lacked some key features competitors offered, a problem remedied with its second-generation. Despite big improvements, sales tapered off each year, the entire minivan segment mostly at fault. In an attempt to swim instead of sink, rivals Honda and Toyota redesigned their vans with newfound style, both the reimagined Odyssey and surprisingly sporty Sienna debuting in 2010 as 2011 models with reinvigorated sales following. It’s taken Kia some time to respond, but now with the all-new and dare I say best-dressed 2015 Sedona they’re finally reaping results where it matters most.

From a Canadian high of 4,772 Sedona sales in 2004, it must have been a depressing state to experience that much improved second-generation van fall from its initial splash of 4,085 deliveries in 2006 to a scant 708 last year, but this completely redesigned Sedona puts Kia back in minivan action with 2,270 down the road as of October’s end. If it keeps this pace up it’ll close off 2015 with almost 4,000 sales, which might pale in comparison to the 14-15,000 Sorentos the brand will sell across Canada this year, but it’s nothing to sneeze at. Then again Toyota will likely sell about 14,000 Siennas and Honda approximately 11,500 Odysseys, so there’s room for Kia to grow.

It should be noted that all of these numbers have no bearing on the quality of product currently being produced. I recently spent a week in the new 2015 Sedona and, while not overwhelmed in every respect, have few negative things to report. Its styling, as noted a moment ago, is arguably best in class, although a properly outfitted Sienna SE is a mighty close runner up despite its age. This said it seems that styling means less in the minivan sector than most other categories. If it did, the Dodge Grand Caravan wouldn’t walk away with 19 sales for every Sedona sold (and this has been a slow year for the Caravan due to plant closures). I don’t mean to slag the Caravan’s face and physique, but let’s be nice and say that its congenial personality does a lot more to win over buyers.

While the Sedona knocks ’em dead from the outside, I can’t see it turning many people off once inside. The general design of the instrument panel isn’t innovative, but it works. My top-line SXL tester’s classy heatable tilt and telescopic leather and wood- or piano black-clad steering wheel with myriad high-quality controls gets complemented by an equally upscale leather-wrapped shifter, while a two-dial primary gauge layout looks sporty and comes adequately filled with a high-resolution colour multi-information display at centre. A nice large high-resolution colour infotainment system flanks the centre vents and looks impressive while delivering fabulous functionality, whereas a narrow row of tastefully understated audio, navigation, phone and vehicle setting switchgear sits just underneath, and multiple rows of amply appealing HVAC controls are fitted below that, all of which are made with good quality plastics, some metallic accents plus plenty of shiny black yet bright and colourful knobs. Like I said, it’s all good, and arguably nicer than the segment’s leading seller.

Better yet, the dash top is surfaced in a luxurious soft-touch synthetic, as is much of the instrument panel and door uppers front to back, while the door inserts are nicely padded to the benefit of elbows big and small. Again, the Sedona delivers much more upscale refinement than you’ll find in a Caravan or one of the Japanese competitors, giving it Korean a solid leg up against some rivals, at least in wooing those looking for a premium minivan experience. My tester featured a two-tone Nappa leather upholstered interior treatment that was a bit over the top for my minimalist tastes, but I’m sure some will think it’s just the ticket.

At first I can’t say I was overly impressed with the driver’s seat. It felt like I was sitting on top of the seat rather than in it, and therefore I couldn’t get comfortable. It actually reminded me of the previous-generation Grand Caravan/Town & Country that felt similar, a problem that was fixed in the current generation. While those older Chryco vans never improved no matter how much time I spent behind the wheel, this Sedona’s seat became more comfortable throughout the week, making me wonder if it’s made from very firm memory foam.

Now that we’re talking seats, lower end seven- and eight-passenger Sedonas get individual second-row Slide-n-Stow seats that feature a new walk-in folding function that flips the lower cushion upward while simultaneously tucking the seatback up snuggly against it, as the entire seat slides forward and stands upright, allowing best in class access to the rearmost row. It locks into this position, by the way, which makes this version of the Sedona second best to the Caravan’s Stow ‘n Go seating system for hauling cargo in base trim or when the optional centre seat/console is removed and standard 60/40-split third row is folded into the floor.

So equipped the Sedona is capable of 4,022 litres (142.0 cubic feet) of max cargo capacity, while it can handle up to 2,220 litres (78.4 cubic feet) behind its second row and 960 litres (33.9 cubic feet) in the very back when all rows are in use. Those looking to tow a small boat or camp trailer should know the Sedona can manage loads up to 1,587 kilos (3,500 lbs) when properly fitted, which is par for the course in this segment.

My tester, on the other hand, featured First Class Lounge chairs that slide fore and aft as well as inward to allow full recline without the seatback hitting the rear sidewalls, plus they also include aviation-style headrests and first/business-class style pop-up extendable leg rests that actually work for regular sized adults, unlike some I’ve tested that are only suitable for very small adults and kids. The problem with these individual captain’s chairs is a narrower space for third-row access, while they also don’t include the Slide-n-Stow feature and aren’t easily removed.

These seats, along with perforated Nappa leather upholstery, come as part of the Sedona’s near top-line SXL trim, not to mention ventilated front seats, a wood- and leather-wrapped steering wheel, woodgrain inlays all-round (and the wood is really nice), a dual-pane panoramic glass sunroof overhead (the front panel of which was scraped on top where it must be rubbing against its mechanism when retracted), stainless steel door scuff plates, two 115-volt household-style power outlets, front parking sensors, auto-leveling HID headlamps, projection fog lights, and 19-inch chrome wheels.

All of this gets added to my tester’s SXL+ trim, along with an eight-inch high-resolution colour infotainment touchscreen with a 360-degree camera, navigation, upgraded audio with eight speakers and a sub, auto high beams, adaptive cruise control, lane-departure warning and front collision warning, the total bill coming to $45,995 plus $200 for Merlot metallic paint and about $1,700 for freight and pre-delivery prep.

I’m not going to cover each and every feature offered in the Sedona’s five other trim levels, the base L model starting at just $27,495 and additional trims including LX, LX+, SX and SX+, but thought I’d highlight a number of items that made life with this van all the more enjoyable. First, after climbing inside via proximity-sensing passive access and then starting up the engine with its pushbutton ignition, I appreciated all the expected powered functions as well as unexpected auto up/down windows all-round. An overhead console-mounted conversation mirror makes it easy to see what’s going on in back while doubling as a handy sunglasses holder, whereas an auto-dimming rearview mirror kept the glare of rear traffic from blinding my eyes. An eight-way powered driver’s seat with four-way powered lumbar adjustment and memory made it easy to find the best possible position each time I took to the wheel, whereas that latter item was power tilt and telescopic, leather-wrapped and filled with redundant buttons for accessing most key features including the aforementioned multi-information display located within the upgraded OLED (Organic LED) Supervision instrument cluster.

I mentioned HID headlamps earlier but neglected to say these include automatic on/off function, whereas the tri-zone climate control with auto de-fog kept everyone ideally at the right temperature. There were myriad audio functions such as aux and powered USB jacks, satellite radio, Bluetooth streaming etcetera, while the audio system performed very well. I never made use of the cooling glove box or heatable second-row seats, not to mention the second- and third-row sunshade blinds and portable cargo LED flashlight, although it was nice to know that all this kit was there if required. I’ll never tire of powered sliding side doors and a powered tailgate, mind you, and appreciated all of the aforementioned electronic driver’s aids that also include cornering brake control, blind-spot warning and obstacle detection.

I should also mention that one of the Sedona’s most impressive standard features is its two extra years or 40,000 additional kilometers of comprehensive warranty coverage compared to most rivals, for a total of five years or 100,000 km.

Like the previous Sedona the new one delivered a smooth, comfortable ride and commendable handling for the class, while its 200-cc smaller 24-valve, DOHC 3.3-litre V6 now includes direct-injection and dual-cam variable valve timing (D-CVVT) for better performance and improved fuel economy, the former good for 276 horsepower and 248 lb-ft of torque and the latter boasting a claimed five-cycle EnerGuide rating of 13.2 L/100km city and 9.7 highway in L and LX trims, 12.9 city and 9.5 highway in SX trim, and 14.2 city and 10.5 highway in as-tested SXL trim.

Its six-speed automatic gets a manual mode, but more interestingly this drivetrain also includes Kia’s Drive Mode Select system featuring Comfort, Eco and Normal settings. I can attest that it gets its best fuel economy if left in Eco mode most of the time, my weeklong average of mostly city driving actually better than Kia claims at just under 12 L/100km.

After seven days of life with the new Sedona I must admit to being impressed. I always appreciate time spent with a minivan, as its utility can’t be beat, and while I would’ve preferred to try out its unique Slide-n-Stow second-row seats instead of this model’s lounge chairs I can see some buyers preferring the ultra-luxe treatment. With respect to the former, I commend Kia for doing something innovative with its second row, none of its Japanese peers having woken up to the need to take on the Chryco vans where they dominate, in second-row flexibility and therefore class-leading passenger/cargo manageability, so I see this being a major Sedona selling point. Where they might be making a mistake is not offering this more family friendly setup in top-line trim, therefore causing those who require full passenger/cargo flexibility to go without top-tier luxury, convenience and safety features. I say, why not make the First Class Lounge seats optional in top trims? I can’t speak for other parents, but I could care less if my kids get to stretch out in business class comfort while I do the long hauling in the driver’s seat, although I do want them to benefit from the safety that comes with the optional lane-departure and front collision warning systems.

While there’s room for improvement, Kia’s new Sedona is the most practical minivan on the market next to the segment sales leader, while it’ll be sure to win many over on styling alone, let alone interior refinement and features. Kia has built a winner here.
©(Copyright Canadian Auto Press)
Car Shopping Tools