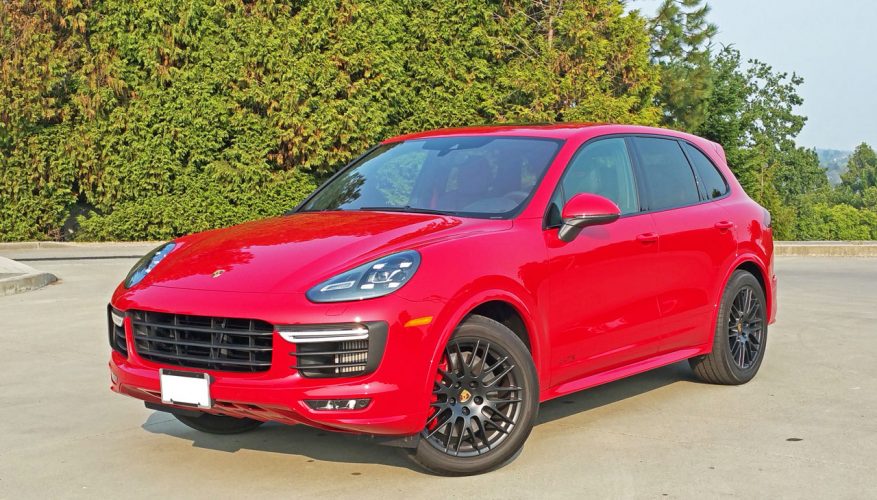 By: Trevor Hofmann
Lighter and sleeker, the 2015 Cayenne has solidified its position as the ultimate sport utility, with a fresh new design that’s immediately more aggressive and masculine looking then its predecessors, while lower and leaner in appearance. It pulls some of the best compact Macan design details forward, yet maintains its brawnier big brother appearance and more affluent status. This is particularly true of the latest GTS model.

With sporty character elements all-round, such as a matte black grille insert, a front fascia on permanent loan from the Cayenne Turbo that’s flanked by black straked air blades in charge of redirecting rushing wind to intercoolers glimmering from within. LED driving lights hover just above and LED fogs hang slightly below, all ahead of a slightly reshaped hood and front fenders plus slim body-colour moldings around the wheel cutouts and subtle body-colour cladding along the rockers, part of the GTS’ standard SportDesign package, culminating in a large rooftop spoiler. The rear end design is upgraded with a revised license plate recess overtop a unique rear diffuser that integrates a devilishly potent quad of black-chromed tailpipes, and I haven’t even mentioned the 20-inch matte black RS Spyder multi-spoke alloys at each corner. Yes, this is one seriously sporty ride. It all comes together nicely around Porsche’s new signature headlamps, with their four rectangular LED driving lights positioned to form a perfect square, and beautifully sculpted taillights with unique blackened lenses along with those same four-point LEDs hidden within.

Like the outward styling, the upgraded interior pulls forward some similar design details to previously GTS models, particularly its use of extra leather across the dash and door uppers, stitched in racy red thread in my tester to match the equally sporty red-stitched and GTS embroidered sport seats, not to mention the optional red-faced centre speedometer dial, plus plenty of soft suede-like Alcantara surfacing, particularly on the seat inserts, door inserts, roof pillars and roofliner. It’s missing the suede-wrapped steering wheel that some of Porsche’s GTS-branded cars feature, but I can live without that. Instead it gets a meaty steering wheel circled in high-grade leather and supported by aluminum-look spokes filled with myriad switchgear, while attractive satin-smooth and matte-finished aluminum spans the width of instrument panel and across each door, plus down the flowing centre console and around the shifter, while yet more aluminum trim surrounds the dash vents, ignition switch and interior door handles.

While all of this is wonderful kit, what I like most about this new-generation Cayenne GTS is the very same thing I like most about many new Cayenne models. Under the hood, instead of a big thirsty V8, it’s Porsche’s efficient yet powerful twin-turbocharged and direct-injected 3.6-litre V6. The change is all about extracting more range from a single 100-litre tank of premium unleaded, the new GTS capable of a much more efficient five-cycle EnerGuide rating of 14.5 L/100km city, 10.4 highway and 12.6 combined, but instead of simply leaving us to talk about reduced emissions, which it achieves, they’ve pumped it up with 20 more horsepower and 63 lb-ft of additional torque than the outgoing V8, making the loss of two cylinders more palatable. The hyper-energetic V6 comes connected to a brilliantly quick-shifting eight-speed automatic complete with fuel-saving auto start-stop at one end and aluminum steering wheel paddles plus Sport and Sport Plus modes on the other, not to mention an exhaust sound enhancer button that when engaged produces a brilliant blatting and burbling of backpressure upon throttle release, a menacing growl that few sport utilities in any class can even hope to emulate. Of course, this is a Porsche and therefore it should sound like it, and drive like it.

With 440 horsepower at its beck and call, plus 442.5 pound feet of torque available from as low as 1,600 rpm, the GTS perks up when the go-pedal gets pressed. Acceleration to 100km/h is quicker than the old V8 by a half-second with just 5.2 clicks needed from the clock, or 5.1 seconds with the as-tested Sport Chrono package installed, yet the audible complications emanating from ahead of the firewall are clearly from a much more Porsche-like six-cylinder, that lighter-weight engine making the Cayenne feel nimbler through the curves as well.

Don’t get me wrong as I loved the previous generation GTS, although the first six-speed manual version I tried could’ve certainly used the electromechanical parking brake this one includes, the previous process of releasing the foot-operated parking brake simultaneously with the clutch, near impossible. But I digress, as Porsche has learned a lot about building SUVs since 2008.

This seven years of experience can especially be felt on the road, by the seat of one’s pants under acceleration and through each undulating off-camber curve, the Cayenne GTS remaining locked into its lane and maintaining its line like few others can… no, let me rephrase, no other mid-size SUV can. Truly, if you want a largish sport utility that drives like a sports car, Porsche’s Cayenne is the answer, this GTS benefiting from a 20-mm (0.8-inch) lower air suspension, dubbed Porsche Active Suspension Management (PASM), while the Cayenne’s standard regenerative KERS joins the powerful Cayenne Turbo’s braking system replete with its 390-mm front and 358-mm rear rotors, both enhanced with bright red six-piston and four-piston calipers respectively, which matched my tester’s $3,590 Carmine Red painted bodywork perfectly.

If you need proof of the Cayenne’s otherworldly prowess, the GTS managed Germany’s famed 20.6-kilometre (12.8-mile) Nürburgring Nordschleife circuit in a mere eight minutes 13 seconds, which might not be as quick as the new Cayenne Turbo S’ seven-minute, 59-second lap, but it’s still outrageously good for a five-seat family-hauling SUV that weighs in at 2,110 kilos (4,652 lbs), not including occupants.

On that last note it’s also a wonderful highway companion, with a smooth and comfortable ride even in Sport mode, plus the ability to pass slower moving traffic within the blink of an eye, or a couple of blinks when negotiating a highway truck. To appreciate that you can take the GTS off-road as well, its height-adjustable suspension providing shockingly capable ground clearance, really sets it apart.

The Cayenne doesn’t offer all the features of some of its rivals, its lack of proximity-sensing access with pushbutton ignition particularly inconvenient, especially considering it’s available with the Volkswagen Touareg and Audi Q7 that share the Cayenne’s underpinnings and more, but Porsche must have its reasons for eschewing a feature that has become as synonymous with luxury as big-screen colour infotainment and multi-zone automatic climate control, both of which come standard with any Cayenne.

On that note I like the fact that the Cayenne’s high-resolution touchscreen is smaller than some others in the segment. I don’t know about you, but I find some of today’s larger infotainment displays give me sensory overload, especially in a world infiltrated with mega smartphones, even larger tablets and giant-size flat screens, the latter hanging from every bistro, sports bar, train station, airport lounge, not to mention home, vying for everyone’s attention all the time. The Cayenne’s is sized just right, and filled with useful functionality, especially those Sport Chrono goodies touched on earlier.

Sport Chrono, $880 with the GTS, not only includes the gorgeous analog and digital stopwatch atop the dash, which replaces the base analog clock, the former specifically upgraded for recording lap times while also providing the time, but also offers more detailed information within the centre display. Just engage Sport Plus mode via a button on the lower console, and heightened engine, chassis and transmission settings come into play, resulting in a more responsive throttle, a firmer active damper setting and more direct steering turn-in, and the Cayenne GTS delivers an even more engaging driving experience. It even revises the traction and stability management settings to allow more play without relieving them of their duties altogether. Of course, it’s a Porsche, so they can be completely turned off as well, but this is not recommended unless you’re very skilled behind the wheel; let’s remember the sheer mass of vehicle you’re attempting to coax through a corner. With either of its Sport settings engaged there’s very little a Cayenne GTS can’t do, including making an already good driver look like a pro.

While all this is fine on a track, I highly recommend taming your enthusiasm on public roads, at least this side of the Atlantic. We can enjoy quick blasts to slightly higher than posted speeds and the occasional romp through a seemingly deserted back country road, or just appreciate the reality that all of the technical wizardry that makes a Cayenne GTS manage impossible feats of performance will also come into play if the need to avoid an accident occurs, a real life situation that will put very useful driving skills to test, and believe me, when such an occasion rears its ugly head you’ll be glad that a vehicle as capable as a Cayenne GTS allows you to escape what may be a certain accident in a less agile family hauler. True, the Porsche Cayenne GTS may cost $108,200 plus a very reasonable $1,115 freight charge to ascertain, but when your family’s safety’s at sake it’ll seem like a small amount.

Along with all its unquestionable performance, the Cayenne GTS comes well stocked with features, and surprisingly omits a particularly important safety detail that you’ll probably want to spend more for. First, standard kit includes a great deal more than I have room to cover here, but some of the highlights are bi-Xenon headlamps with adaptive cornering and auto high beam, adaptive brake lights, rain sensing wipers, stainless steel GTS emblazoned doorsills, a heatable steering wheel, 4.8-inch high-resolution TFT colour multi-information display, dual-zone auto HVAC, a seven-inch high-resolution colour infotainment display with HD radio, Bluetooth and navigation, but oddly no standard reverse camera. The standard menu continues with eight-way powered front seats including driver’s side memory, front and rear parking sonar, a powered tailgate that strangely doesn’t let you raise or lower it remotely when outside, and impressive 40/20/40 split folding rear seatbacks that allow a flexible array of passenger and cargo configurations resulting in 670 litres (23.6 cubic feet) behind all seatbacks and a maximum of 1,705 litres (60.2 cubic feet) with all folded flat. As mentioned, there are many more features, standard tire pressure monitoring and the surprising addition of standard rear side-impact airbags included, but I’ll leave these for you to discover personally via Porsche’s recently updated retail website.

Instead, I will try to figure out where to put my rather large Samsung Note 4 smartphone now that I’ve filled the front cupholders with a water bottle and my partner’s can of Coke. That’s one of the Cayenne’s few problems, finding anywhere to put anything. There are two cupholders in the centre console and when they’re in use there’s absolutely nowhere to put your phone, sunglasses (there’s no holder in the overhead console), coins, keys, or what-have-you. A floating-type centre console with space underneath would solve the problem and look quite nice with the softly angled lower console design Porsche is using now, but as it is you need to place your odds and ends within the centre console under the armrest, or (not recommended) hang on to them. If it’s something that you want to have close by for easy reach, you’re out of luck. Maybe Porsche is trying to promote safer non-distracted driving, and if so I should probably be commending them.

Either way I must commend them for building such a phenomenally good sport utility, with the emphasis firmly on sport. Of course it does everything else a family-oriented SUV should too, while providing enviable styling and prestige, the GTS now a standout addition to Porsche’s ultimate utility theme.
©(Copyright Canadian Auto Press)
Car Shopping Tools