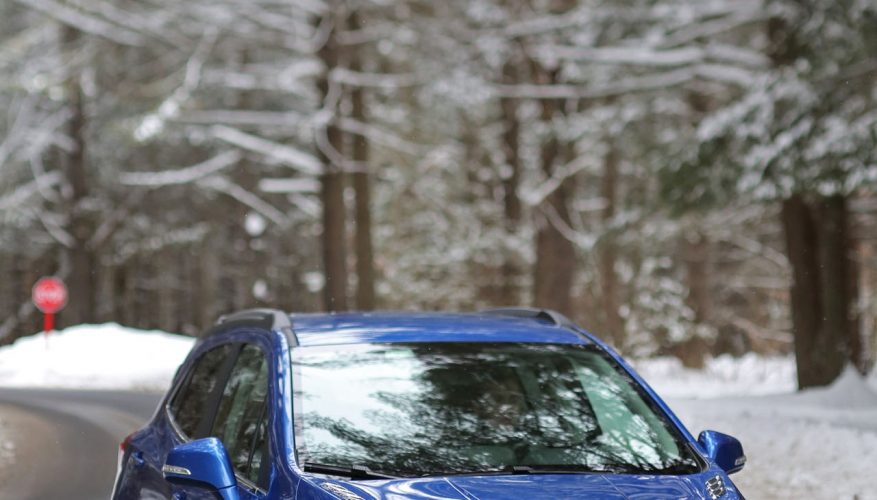 By: Trevor Hofmann
When you think of innovators amongst automotive brands, does Buick come to mind? Certainly in its formative years the 112-year old brand had its fair share of breakthroughs, its “valve-in-head” engine design, known since as the overhead valve (OHV) engine, might be its most significant, but that took place even before most of its current LaCrosse owners were born (tongue firmly in cheek). Still, my 50-something age group remembers larger than life semi-luxury family sedans and wagons with pillow-top upholstery in tufted velour, slabs of faux woodgrain interior trim and sometimes a similar woodie treatment used for the exterior, plus a cloud-like ride and boat-in-the-water handling, not to mention fuel economy similar to a mega yacht’s.

Stuck in our dated pasts, some of us forget that we’re only as old as we think we are, and Buick, which is in the process of truly reinventing itself, is now being discovered by a whole new generation of buyers that never knew the company for anything else but its current lineup of progressive smaller to mid-size vehicles.

When I spoke of innovation a moment ago, I was referring to Buick’s leadership in the subcompact SUV segment, its Encore one of the forerunners in a class that’s now nine models full. The Encore shares underpinnings with another innovator, Chevy’s Trax, both arriving in Canada as 2013 models. That doesn’t sound like a long time ago, but only Nissan’s Juke, Mitsubishi’s RVR and Mini’s Cooper Countryman preceded the GM duo, while the 2016 model year alone has seen the segment nearly double in size with four new models joining the fray, including the Honda HR-V, Mazda CX-3, Jeep Renegade, and Fiat 500X.

So far the latter two haven’t posed much of a threat to the Trax’ recent sales leadership and Encore’s previous third-place standing, but the upstart HR-V is now number one after just six months of sales, while the CX-3 has taken over third place, pushing the Encore to fifth due to the RVR’s tenacity.

Of course there’s another way to look at this. Buick is a near-luxury brand and the Encore is arguably more refined inside than the majority of subcompact SUVs mentioned so far, so it should more rightly be compared to those in the premium subcompact/compact SUV segment. We can rightfully graduate the Countryman into true luxury status because it hits all of the benchmarks, while the 500X comes next closest in its top-line trims, and some premium buyers might also consider the well equipped CX-3 GT, but despite this bunch of would-be premium players, Encore included, being slightly smaller than the more established luxury branded compacts outside, they measure up to and in some cases surpass Audi, BMW and Mercedes-Benz in interior quality and refinement, as well as overall roominess for passengers and cargo. This is especially true for the Encore, while it easily outpaces them all for popularity.

Where Audi sold 2,886 Q3s as of October 2015, plus Mercedes-Benz found 2,574 GLA buyers and BMW 2,296 X1 customers, Buick leads the way with 4,117 happy Encore owners. Why do I say happy? Well, first of all you can get into an Encore for as little as $27,895 plus $1,650 for freight, which is a far cry less than one of the Germans. My tester was kitted out in top-line Premium trim, however, which loads it up with features like auto on/off rain-sensing wipers, seven-speaker Bose audio with satellite radio, a household-style 110-volt three-prong power outlet, front and rear parking sonar, plus lane departure warning and forward collision alert, and commensurately ups the asking price to $32,920 in FWD and $34,920 with as-tested AWD, while its appropriately named Brilliant Blue Metallic paint was no-charge, as was its downright rich looking Saddle leather upholstery.

Even if you tacked on $995 for optional White Pearl Tintcoat paint and another $795 for the oddly named Experience Buick Package to my almost loaded tester you’d pay far less with the Encore than any of the Germans, that will broach the mid-$40k to low $50k range when suitably fitted with as many options, this package adding navigation plus a power tilt and slide glass sunroof (the latter is usually another $1,100, but it’s included free right now) for a near-fully loaded price of just $35,815 plus freight.

Some might balk at paying this much for what they assume is a gussied up Chevy Trax, and while it’s true that the general size and shape of the car is the same (and it’s also true that the Audi Q3 is little more than a VW Tiguan and new BMW X1 shares underpinnings with the Mini Countryman), and that its fully-independent front strut and semi-independent rear compound crank torsion beam suspension setup is identical, plus its turbocharged 1.4-litre four-cylinder engine is also pulled from the same crate before getting a tri-shield branded engine cover snapped into place on top, it also should be noted that the Encore’s exterior is endowed with a completely unique chromed waterfall grille, totally different headlight design with halogen composite projector beams featuring Buick’s exclusive blue translucent rings, and totally redesigned front fascia, while the reshaped hood incorporates Buick’s trademark “VentiPorts” (for what they’re worth), its fenders, side sculpting, taillights and rear end also totally reshaped, plus loads more chrome gets added, plus my favourite detail, satin-silver skid plates front and back, all resulting in a much better looking car, most would agree, whereas the suspension has also been retuned, albeit I was rightly impressed by the Trax’ ride and handling combination despite not being shod in the Encore’s 18-inch alloys and 215/55R18 all-seasons, whereas the engine is already good for an energetic 138 horsepower and 148 lb-ft of torque.

Due to the extra weight of the Buick’s features and lack of a manual transmission it doesn’t squeak under the 7.0 L/100km highway fuel economy threshold like its Chevy cousin, the Encore instead receiving a claimed five-cycle EnerGuide rating of 9.5 L/100km city, 7.2 highway and 8.5 combined with its standard six-speed auto and FWD, or 10.2 city, 8.0 highway and 9.2 combined with AWD.

It’s not only fuel-efficient as far as SUVs go, but it’s also surprisingly roomy for such a small subcompact model. You sit nice and high, one of the main reasons people buy into the crossover SUV class, which combines with a large greenhouse for excellent visibility all-round. The Encore is also an easy vehicle to drive with an upright and comfortable seating position, its overall footprint small enough and throttle response quick enough to sneak in and out of tight inner-city traffic, yet out on the highway the Encore tracks easily, never feeling nervous like some short-wheelbase utes, whereas it similarly rides smoothly and again not jumpy or bumpy. Being a Buick it’s quiet, not to Enclave levels, but still impressive for the category, a good thing considering its upscale environment.

I previously noted the Encore’s cabin was impressive, but I should point out that it beats the Germans and all other rivals in some respects. First off, there’s a nice soft-touch dash top that folds over to encompass most of the instrument panel while also circling around the primary instruments and entire centre stack, plus the pliable, padded treatment also covers the top glove box lid (there are two), something most Europeans omit, plus the door uppers are soft and padded front to back, as are the leatherette insets and armrests, the folding driver’s armrest particularly soft and comfy, plus fabric-wrapped A-pillars finish off the premium detailing. The Encore’s only downfall is a fair helping of faux wood that at first glance looks pretty nice, but alas upon further inspection feels like the hollow plastic that it is, which is what we should expect for the price I suppose.

Back on the positive, my Encore boasted a superbly crafted and shaped leather-wrapped steering wheel fitted with some of the best steering spoke switchgear in the class, while the four chrome-rimmed backlit primary gauge dials were gorgeous, its deeply recessed full-colour, high-resolution infotainment system up to par with others in this class, the bevy of buttons on the centre stack just below a bit confusing albeit well-made and nicely damped for a quality feel, the shift knob lacking a leather-wrapped knob but still very nice with metallic detailing plus a thumb-actuated manual shifter and leatherette boot, and two-tone leather-clad seats quite comfortable. I’d say that the overall quality of this interior is as good as most premium peers, while it upstages a few when it comes to the luggage compartment.

Let me take that last point back, I meant that it upstages some in size and usability, not necessarily when it comes to touchy-feely premium finishings. Truly, the Encore’s luggage compartment provides nothing fancier than the Trax, other than a nice patch of carpeting, so Buick could upgrade this with some more rigid, better finished side walls, a higher end cargo cover, chromed metal tie-downs, and possibly a polished metal cargo doorsill guard, but once you get back its remedial looks the rear seats fold completely flat resulting in considerable space for loading big cargo. You first need to flip the lower rear seat cushions upward, creating the room needed to fold the rear seatbacks flat, after which you’ll be rewarded with 1,371 litres (48.4 cubic feet) of gear-toting space compared to just 532 litres (18.8 cubic feet) when both rows of seats are in use. That’s more capacity with the 60/40-split rear seatbacks both up and down than the Audi Q3 and a number of others, by the way, making the Encore particularly utile.

In the end the Encore won’t likely pull many if any potential Q3 buyers away from Audi, or sway many other fans of German brands from their respective compact crossovers, but for those who want a very good little CUV with a premium-level interior that delivers at a higher level than most in its class, plus great interior roominess, good overall performance and decent fuel economy, the Encore is hard to beat. It’s now up against some seriously tough competition, but after spending a week with this Premium AWD example I believe it will remain a strong seller while continuing to show us old stock naysayers that Buick is no longer out of touch, but rather a leader when it comes to small, fuel-friendly premium subcompacts.