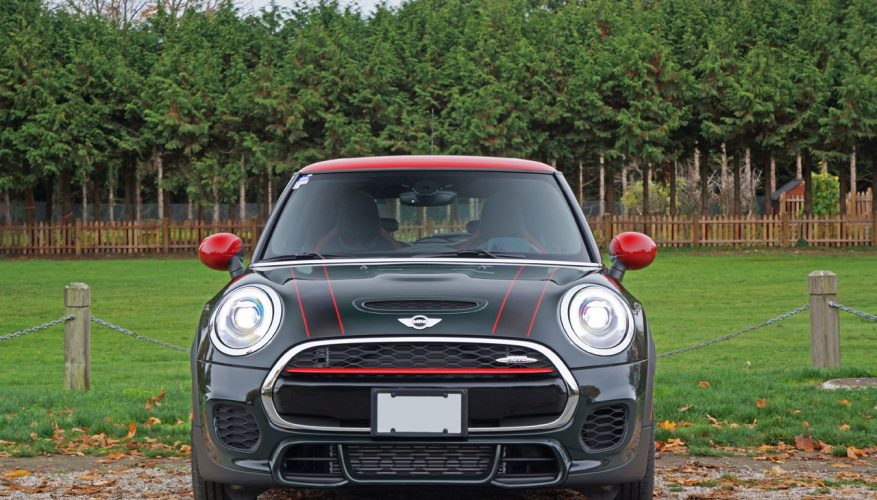 By: Trevor Hofmann
In case you’re wondering whether anyone will notice that you spent a lot more for a JCW than mere mortals pay for a regular Cooper or Cooper S, don’t worry. From it’s bold red horizontal grille rib and unique badging, up to its gaping hood scoop and then down to its heavily ducted lower fascia, past its bulging fenders to unique optional machine-finished 18-inch five-spoke alloys with black painted pockets on 205/40 Pirelli Cinturatos framing standard JCW-branded glossy red four-piston fixed calipers that hover over massive dinner plate-sized ventilated discs, back up to a wing-like rooftop spoiler, flap open to wrestle with a turmoil of otherwise chassis-unbalancing air, quad-vented rear bumper cap housing big fat twinned centre-mounted slash-cut exhaust pipes protruding out back, the JCW is a car that will get you as many looks as it’ll attract Speed Racers pulling up alongside to check you out and possibly tempt weaker minds into a quick side-by-side sprint.

Even on the way home from my local Mini dealer that reps media on behalf of Mini Canada I was closely followed by a young Chim-Chim in a radically tuned Mazda RX-8, not something you see everyday, but likely a good match for the JCW, although I’m beyond such temptation now that I’m on my downward slide, so I wouldn’t know which car might come out on top. To me the JCW’s performance is more about personal fulfillment than one-upmanship, unlike the original Coopers that were all about taking the checkered flag on track and in rallies.

A short history involves the brilliant original Sir Alec Issigonis-designed BMC Morris Mini Minor and Charles and John Cooper’s Formula 1 championship-winning Cooper Car Company coming together in 1961, the resultant Cooper and Cooper S models owning the top podium of the Monte Carlo Rally in 1964, 1965 and 1967 (plus ’66 as well, albeit disqualified from breaking a headlight regulation), plus winning positions at many other motorsport events. That’s a history worthy of celebration, and this in mind along with the marketing opportunities attached to such a rich sporting legacy, soon after BMW created the new “MINI” brand and brought us the much-lauded and much larger modern-day Mini, which continues to grow into itself and by so doing appeal to a much larger audience, the John Cooper Works nameplate was created in order to shed a little light on this once glorious past.

This latest JCW builds on the all-new larger, more accommodating and ultimately refined Mini Cooper 3-Door that arrived last year for the 2014 model year, initially dubbed Mini Cooper Hardtop, the 3-Door designation arriving last year as a way to distinguish this two-door hatchback version from the all-new 2015 5-Door I’ve now tested multiple times. Finally, as this model year comes to a close, I’ve gotten my mitts on a 2015 JCW, and let me tell you there’s a great deal more to it than my earlier styling comments.

Certainly it’s an exciting take on the new 3-Door design, adding some confident swagger to the regular car’s open-jawed and wide-eyed appearance. As expected that attitude is backed up by the kind of street cred only 228 horsepower and 236 lb-ft of torque can provide, some 20 horsepower and 44 lb-ft more twist than made by the outgoing JCW that I was fortunate enough to test last year, while the new model’s 1,309-kilo (2,886-lb) curb weight lets it accelerate with same kind of power-to-weight ratio as a 400-plus horsepower muscle car.

Of course, a big bad American brute won’t handle with the JCW’s agility, a trait that sets any Mini apart from most rivals and clearly raises this specially-tuned Cooper above the majority of pocket rocket wannabes. Jump into my tester’s fabulously formed body-hugging optional leather and suede-lined sport seats, grip the beefy standard leather-bound sport steering wheel and flick the bright red and chrome centre-stack mounted toggle switch to fire up the 12-valve, DOHC, direct-injected and twin-scroll turbocharged 1.6-litre four, and that mill along with its aforementioned exhaust ports immediately make a rorty note, letting all within earshot know that this isn’t your average commuter hatchback. Certainly it’ll take you to and from work as needed and do so in a world of comfort and convenience, but good luck getting there on time as each and every curving side road, circling cloverleaf and undulating off-ramp will tempt you to dive off the deep end for some pavement pounding fun.

Rip into a set of esses and the JCW rewards with unfathomable grip for such a tall and upright city car. The little hatch never ceases to amaze from one right-angle off-camber bend to another tarmac crumbling corner, no matter the chosen road’s ill state of disrepair. The JCW somehow seems to seek out such forgotten strips of lost history in search of yet a better stretch of snaking roadway, modernization straightening and widening all the best two-laners for safety and traffic flow’s sake, those leading to yesteryear’s hamlets and backwards farming communities often ideal for lighting up the Mini’s front rubber. From one flick of my tester’s steering wheel paddles to another, the six-speed autobox blips, snorts and growls between cog swaps, this being the first of any JCW model to offer such an advanced alternative between the front wheels and powerplant.

Standard kit is a six-speed manual, thank goodness, but suffice to say the automatic provides loads of quick-shifting performance in a package that’s a lot easier to live with day in and day out. Yes, I’m back to that commute, once again amid bumper-to-bumper reality where most of us live each morning and eve, my tester’s sport-tuned torque-converted auto now opening up JCW ownership to an entirely new kind of performance enthusiast.

Along with its ease of use comes another concept JCW fans may never have considered before, fuel-saving technologies. True, eking out the best possible fuel-efficiency matters as much on that F1 track and rally course as it should on today’s roads, as critical for winning races as it is for reducing emissions and meeting ever more stringent government regulations. For this reason the new JCW shuts itself down at idle, the noted burbling exhaust suddenly becoming EV-quiet, and then upon lifting the brake pedal roaring back to life in a millisecond, ready to sprint ahead of sleepy surrounding traffic. You can defeat the system if you’d rather hear the engine and exhaust rumble, but having always been at least partially under the ideological influence of this new green religion, I allow such silent opportunity to represent a state of calm before the storm.

Such technologies, the engine’s relatively diminutive size and the JCW’s featherweight design helped my auto-equipped tester achieve a premium-sipping five-cycle EnerGuide claimed fuel economy rating of 9.3 L/100km city, 7.3 highway and 8.4 combined, pretty impressive considering the performance at hand and foot. Of course you’ll need to drive it more sedately than I did in order to achieve such an impressive set of numbers, but once again during those commutes and other mundane daily activities its added thriftiness will save you coin at the pump.

While the JCW’s performance has won my tongue thus far, part of any Mini’s appeal is the level taken to provide an upscale premium experience, this JCW taking things above and beyond the Teutonic British brand’s usual high state of affairs. Soft-touch surfaces are ever-present over the dash-top, across the instrument panel, down each side of the centre stack, along the door uppers, within the door inserts and over each armrest, along with fabric-wrapped A-pillars, done out in black to match the JCW’s equally inky roofliner, while this very special Works car also gets special checkered glossy black inlays to the left of the steering wheel and ahead of the front passenger, along with piano black lacquered trim circling the door panels and elsewhere, loads of red stitching around the thick leather-wrapped sport steering wheel and shifter to match the red trim on those unique sport seats mentioned earlier, the suede-like Dinamica inserts nicely detailed with a stitched square pattern.

As noted these aren’t stock, but rather a $2,250 option, my tester being nicely outfitted with additional extras that took a fair bit of research to uncover. Items mentioned that also cause an extra charge over the $33,240 base JCW, plus $2,325 for freight and pre-delivery prep, include a near black coat of JCW-exclusive Rebel Green exterior paint costing a cool $1,000, although my tester’s Chili Red roof and mirrors were welcome no-cost options. The Chili Red pin-line detailed black racing stripes that ran down each side of the hood will set you back $150, mind you, as will those 18-inch JCW Cup Spoke two-tone alloys that I noted before, these replacing the JCW’s standard 17-inch Track Spoke silver rims.

Back inside, my test car included the oddly named but well-priced $1,000 Essentials Package with its absolutely must-have dual-pane panoramic sunroof, heatable front seats and rear fog lamps, while it also came fitted with the appropriately dubbed $1,150 Loaded Package that adds proximity-sensing Comfort Access to the standard toggle ignition switch, an auto-dimming rearview mirror, a folding front-centre armrest, auto on-off headlights, rain-sensing wipers, auto HVAC, and (drumroll please) dynamic damper control that adds Sport, Mid and Green driving modes to heighten overall performance, from firming up the ride to quickening throttle response, increasing revs before shifts and enhancing the exhaust note, or alternatively saving a little high-test when it would otherwise be wasted in traffic.

You can upgrade your JCW to include the Mini Connected Package too, which for a very reasonable $800 adds Mini’s Integrated Visual Display to the circular centre "stack" where the old speedo used to go (I miss that idiosyncratic feature, along with the cool needle that spun around the outside of the infotainment display), plus Bluetooth and a USB plug (which truly should be standard kit), the Mini Connected infotainment interface that’s one of the best in the industry, and yes, another centre armrest (they actually don’t add a second one, but it’s there if you don’t go for the previous package), while my tester included all that kit and more thanks to an upgrade to the $1,450 On-Board Navigation Package.

Not to make me feel like I was driving a bare naked Mini Moke (tongue placed firmly in cheek), my tester was further enhanced with a $1,250 Visibility Package that added a rearview camera (again, this should be standard), rear parking sonar, Park Assistant (that does the parking for you) and, for another $500, a handy head-up display unit ahead of yours truly atop the dash.

Feeling fully pampered to the tune of $42,840 plus freight, I had one of the sweetest stock Minis on the planet at my beck and call for an entire week of delightful motoring, and believe me when I say it was a seven daylong joyride that I won’t soon forget. Yes, for those who love the art of driving yet require practical room for four (plus one in a pinch) and 246 litres (8.7 cubic feet) of what-have-you space behind its 60/40 split-folding seatbacks, not to mention 1,076 litres (38 cubic feet) of life-hauling capacity when dumping those now-grinning future Mini-owning rear tagalongs off on the sidewalk and heading to the hills for the weekend with significant other riding shotgun, the JCW is your car in waiting. But seriously, don’t wait too long for this one, as it’ll zip right on by faster than you can blink an eye.

The new JCW is a truly special little subcompact that only those in the know deserve to own. So try one out so you can know for yourself. You can thank me later.
©(Copyright Canadian Auto Press)
Car Shopping Tools