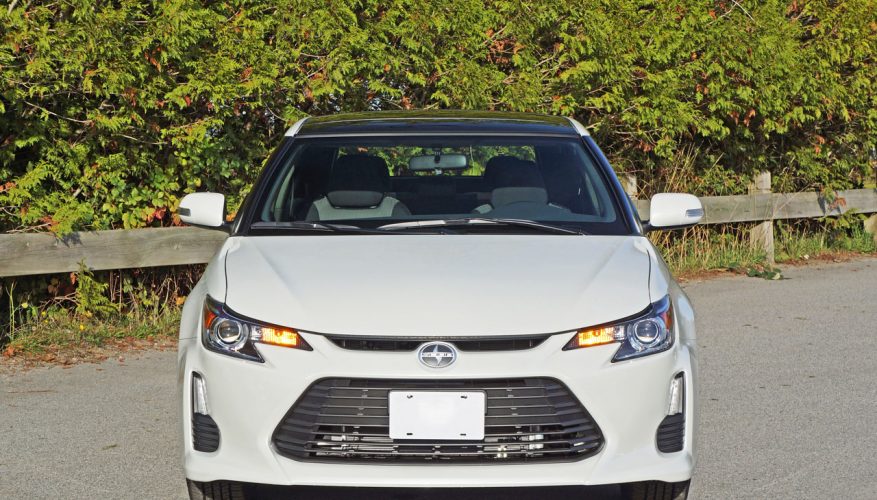 By: Trevor Hofmann
Think of the tC as the Corolla’s sportier two-door sibling. A brother from another mother, albeit the same dad. The dad is Akio Toyoda, indirectly at least. He’s the man responsible for injecting some much-needed life into a Toyota namesake brand that was too staid and conservative when he took over as president and CEO of TMC in June of 2009, and the rest, as they say, is history. Scion, which is largely made up of reworked Toyota products not available here, has been a direct benefactor.

The tC preceded Toyoda’s six-year legacy, if you can call half a dozen years of leadership a legacy. Either way, one of his crowning achievements thus far is the brilliant FR-S sports coupe that wears the Scion nameplate here in North America. Neither the FR-S or this tC is an all-out success story when it comes to sales, but both have boosted the image of Toyota’s global operations and morale within Scion, while the result of Toyoda-san’s focus on aspirational design and overall refinement now includes the much more exciting Corolla that shares some underpinnings with the tC, the all-new platform-sharing Scion iM that could very well become the big sales hit the offshoot brand has needed since day one, and of course this very tC that received sportier styling and more power for its 2014 model year, paddle shifters for the automatic in 2015, and now much better infotainment for 2016.

That’s the tC news this year, its styling, performance and the majority of its interior carrying over. I’m ok with styling staying just the way it is, as the previous update made it much more aggressive looking thanks to FR-S influences nose to tail, plus uniquely scalloped headlamps, vertical front and rear lighting elements, as well as a sweet set of chrome-enhanced clear lensed LED-infused combination taillights, not to mention a particularly hot foursome of Y-style five-spoke machine-finished 18-inch rims with metallic grey painted pockets on 225/45 Yokohama Avid rubber. Scion classed up the look with standard side mirror turn signals and a completely black rooftop that looks way upscale while simultaneously hinting at the standard dual-pane panoramic glass sunroof that makes its cabin all the more inviting.

Interior highlights include a truly sporty set of orange on black dual-dial primary gauges rimmed in what Scion calls “precision-milled cylindrical” binnacles that certainly look and feel like real aluminum, while more alloy-style trim gets added to the thick and meaty leather-wrapped flat-bottomed three-spoke sport steering wheel. Yet more of the metallic treatment rims the vents, circles the shifter boot and trims the lever itself, while the dark brushed alloy-look surfacing also runs the full length of each door pull. Scion finishes the top of the urethane shift knob and all three HVAC dials in chrome to match the door handles, whereas the instrument panel gets a nicely textured grey metallic inlay that stretches from the left side of the steering wheel, past the centre stack where it widens to surround the infotainment display and then narrows as it passes ahead of the front passenger. It’s a great looking dash design for sure, but take note that the tC’s cabin is finished with fewer premium-level soft-touch synthetic surfaces than any of its competitors, and as far as refinement goes, it gets thoroughly upstaged by its new iM sibling that is leading the way amongst mainstream volume compact models when it comes to high-quality materials and luxury-brand levels of soft-touch pampering.

Just the same, a number of the tC’s interior details are very nice indeed, including a cast-aluminum HVAC interface-housing that supports three large rotating dials with backlit buttoned inserts that only need a gentle touch to actuate. It’s a simple system, not featuring automatic climate control or any advanced smart technologies that let you preset temperatures from your smartphone, but it’s well designed to use with gloves during winter’s colder months and looks superb.

I hinted at a new infotainment system for 2016, and I must say it’s really impressive. The high-resolution full-colour seven-inch Pioneer touchscreen boasts Bluetooth with audio and text messaging, advanced voice recognition with casual speech so you won’t have to learn a bunch of stock phrases in order to make it work, while the audio portion gets an AM/FM/MP3/WMA radio, eight great sounding speakers, USB, aux and iPod connectivity, an auto sound levelizer, plus Aha, Internet Radio, POI Search, and Gracenote Database. The only thing it doesn’t include is a rearview camera.

Speaking of features, like all Scions the tC only comes in one single trim level, and for a base model starting at $22,285 for the manual and $23,585 for the auto, plus $1,695 for freight and pre-delivery prep, it’s extremely well outfitted. Everything I’ve mentioned so far is standard, as is remote entry, powered windows, heatable powered side mirrors, tilt and telescopic steering, cruise, a multi-information display, steering wheel-mounted audio controls, A/C with rear seat heater ducts, variable intermittent wipers, a rear wiper/washer, dual vanity mirrors, illuminated entry with fadeout, an overhead console with map lights, and more.

While this may be a problem for some, most will appreciate the tC’s well-bolstered and extremely comfortable front seats, complete with excellent lower back and lateral support, while those strapped into the rear seats get much more room than most compact coupes allow. Both rows are finished in high-grade fabric upholstery comprised of black bolsters and grey inserts, the latter featuring a subtle stripe that looks really attractive. The rear seats recline 60/40, but more importantly they fold almost completely flat in that same configuration when the need to haul life’s gear arrives, making the tC an ideal companion for skiers or boarders, whether on snow or surf. Scion doesn’t offer up any fully expanded measurements, but when the rear seats are upright the company claims 417 litres (14.7 cubic feet) of capacity.

On your way to the slopes or beach you’ll appreciate a car that was designed to take on winding mountainside roads and serpentine coastline curves. It all starts off with a 179 horsepower 2.5-litre four that spins freely to about 6,200 rpm, while power comes on strongly in higher rpms and all of its 173 lb-ft of torque can be felt much lower down the rev range. My tester’s six-speed manual shifter snapped into each gear accurately, but I wouldn’t put it into a “best of” category. Clutch take-up is light and positive, although there’s more travel than I like. I’m sure the latter can be adjusted for quicker, easier actuation, but I’d probably get used to the tC the way it is if given more time behind the wheel. I should note right here that I’ve tested this car with its six-speed automatic and have nothing but praise for this combination, as the engine is well suited for an autobox and the steering wheel paddles added last year make it quite engaging.

The tC’s ride is firm yet should be compliant enough for most, while its handling is impressive for this class. I referred to the tC as a Corolla coupe initially, but right about now I need to stress that this Scion’s suspension is way upgraded over the four-door Toyota. The Corolla uses a torsion beam rear setup and this tC sports a fully independent multi-link design, just like the new iM. This makes it more capable of handling bumps during high-speed corners, an IRS keeping each rear tire in better contact with the road surface and therefore providing more grip when needed most.

Also of note, the tC placed first in its Compact Sporty Car category in the latest JD Power Vehicle Dependability Study while Scion was one of the highest ranked mainstream volume auto brands, only behind Toyota and Honda, placing 9th out of 33 total brands including premium marques. What’s more, in the latest JD Power Initial Quality Study the tC took third place in the same category, although the Scion brand didn’t fare as well in 25th place amongst 33 brands.

That last paragraph kind of sums up the Scion tC: it’s mostly good. It’s a cool looking compact sports coupe with a comfortable, upright driving position and more than enough room in back for passengers and cargo, plus great power off the line, even more enjoyable handling, some nice interior detailing and a great new infotainment system, and while it lacks some refinements and key features others in the segment offer in their pricier trim levels, the tC hits the market well loaded up for a great price. The icing on the cake is that all this Scion goodness is backed up by Toyota reliability and found at your local Toyota dealer. All in all the tC is an easy car to recommend.
©(Copyright Canadian Auto Press)
Car Shopping Tools