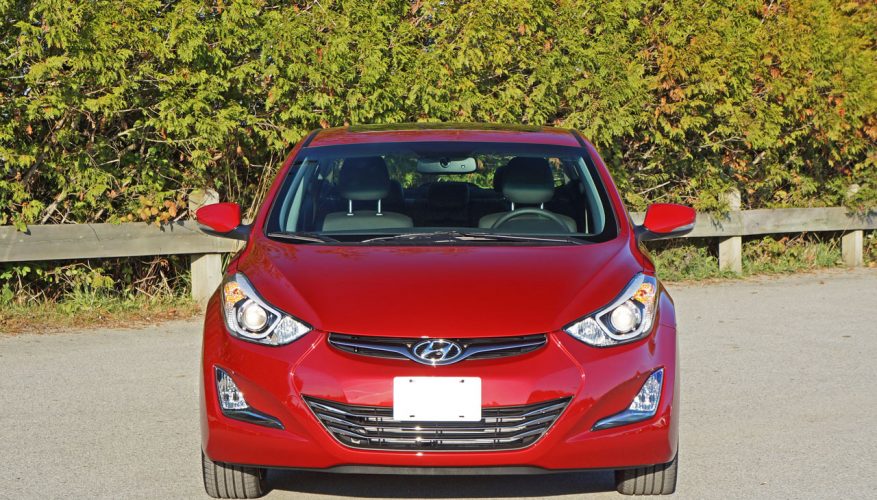 By: Trevor Hofmann
The Elantra remains as stylish as four-door compacts get, its curvaceous front fascia only upstaged by an even swoopier rear design, both bejeweled with beautifully detailed lighting elements normally found on much more expensive cars. My top-line Limited tester takes everything up a notch, with chrome ribs on the lower grille opening, more brightwork within its upgraded projection headlights, a touch more highlighting its LED side mirror turn signals, more chrome trimming the door handles, while stylish taillights hover over a chromed tailpipe poking through a cool matte-black diffuser-style bumper cap. Those headlights and taillights also get unique LED detailing, the former some of my favourite in the entire industry, while the stylized twinned five-spoke 17-inch alloys with metallic grey painted pockets add just the right amount of sport without taking away from this car’s elegance. The car looks classy from head to toe.

No wonder the Elantra is such a big seller. Last year Hyundai Canada sold 50,420 from coast to coast, that number only eclipsed by one rival. Its 2015 calendar YTD sales of 37,922 units as of September put it right back on track to crack 50k again, and this despite the 2016 model year being the last in this body style. I’d say Hyundai has figured out exactly what Canadian compact buyers want and executed it perfectly.

Of course, most of these 50,000-plus buyers weren’t bucking up for top-line Limited trim. Hyundai offers six trim levels this year including the L Manual, GL Manual, GL Auto, GLS Manual, GLS Auto and Limited. I don’t have a breakdown of trim level sales in front of me, but I’ll make a guess that most Elantras are sold in GL Auto and GLS Auto trims. These are very nicely equipped cars with features like keyless entry, auto on/off headlights, tilt and telescopic multifunction steering, Bluetooth hands-free, cruise control, air conditioning, satellite radio, and heatable front seats for the former plus all that and fog lamps, 17-inch alloys, a leather-wrapped steering wheel and gearshift knob, moonroof, touchscreen infotainment system with rearview camera, heatable rear seats and a more powerful 2.0-litre engine for the latter, not to mention some of the base model’s features like 172-watt, six-speaker AM/FM/CD/MP3 audio with aux, USB and iPod connectivity, Hyundai’s Driver Selectable Steering Mode (DSSM) system with Comfort, Normal and Sport settings, and headlights with an escort feature that leaves the lights on for 30 seconds after locking the car and a welcome function that leaves them on for 15 seconds after clicking the remote or, in the case of my tester, merely approaching the car. What more could a compact car buyer want?

Questions like that are why cars like the Elantra Limited exist, the $25,549 model upgraded with those LED lighting elements and chromed details mentioned earlier, plus proximity-sensing passive access to get inside and pushbutton ignition to make starting and shutting down the engine ultimately convenient. Additional premium-like Limited features include powered windows with auto up/down all-round, an eight-way powered driver’s seat with lumbar, leather upholstered seats, matching leatherette door inserts, an auto-dimming rearview mirror with an integrated garage door opener, dual-zone auto HVAC, and larger seven-inch high-resolution touchscreen infotainment featuring navigation.

It all comes in a cabin that exudes quality, the dash top soft to the touch and the leatherette on the doors given a high quality feel that comes close to simulating the real leather on the seat bolsters, the seats’ inserts finished in even nicer perforated leather for better breathability. They’re wonderfully comfortable and fully adjustable, especially the driver’s that gets a lot of height adjustment benefiting shorter drivers. Lower it all the way down and the opposite occurs. That tilt and telescopic leather-wrapped steering wheel I noted before has a lot of rake and reach allowing any number of body types to fit in with ease, with myriad buttons and nice dark metallic surfaces on each spoke, more of that metallic trim on the sporty primary instrument panel, plus on each vent and along the large swooping door pulls for a truly upscale environment.

All of the switchgear is excellent too. Certainly their plastics aren’t as premium feeling as a BMW, but they’re every bit as good as those used in some premium brands, a tad hollow but tightly fitted and well damped for a quality user experience. Those alongside the big touchscreen connect through to a fully-featured infotainment system with crystal clear resolution and bright, colourful graphics that should even please ardent iPad and Android tablet users, while rather than trying to use your smartphone for directions the navigation system benefits from being fully integrated within the car’s stereo system so prompts come audibly as well as visually.

The audio sound quality is quite good for the class, while as noted earlier it still includes a CD player for those, like me, who enjoy hearing the deeper base tones and sharper details in their favourite tunes. For variety’s sake the playlists on my phone were easily accessible via Bluetooth audio streaming, as were podcasts from my favourite market analysts.

The Elantra’s auto climate control interface that sits lower down the centre stack is a real feast for the eyes, its red and blue on glossy black display looking positively rich and surrounding buttons large enough to be used while wearing winter gloves, a bonus for those in Canada’s colder regions. On that note the two-way front seat heaters warm up quickly and stay hot, while those in the outboard rear seats might only offer one temperature, but it should be warm enough for most.

Those rear seats are very supportive for the lower back, incidentally, while there’s no shortage of passenger room in any of the three positions, the rear quarters of the Elantra feeling more midsize than compact. That’s because the Elantra delivers greater passenger volume than any compact competitor, the result being an airy cabin that let’s you really stretch out. Ditto for the trunk, although I don’t recommending stretching out back there. It measures a sizable 420 litres (14.8 cubic feet) just the same, while 60/40-split rear seatbacks expand its usability when needed.

I mentioned earlier that the GLS model gets upgraded to a 2.0-litre four-cylinder that gets added to the Limited model’s standard features list, and it makes a big difference over the base model’s 1.8-litre four. Where the smaller engine is already feistier than the majority of compact competitors at 145 horsepower and 130 lb-ft of torque, while stocked with either a six-speed manual or optional six-speed auto with manual mode, the 16-valve, DOHC 2.0-litre with dual continuously variable valve timing and direct-injection puts out 173 horsepower and 154 lb-ft of torque for very strong acceleration off the line, while it makes short work of highway passing maneuvers. The automatic performs well too, with nice crisp shifts at full throttle and nearly seamless cog swaps when cruising.

No matter the trim the Elantra rides on a very smooth independent MacPherson strut front and torsion beam rear suspension setup, while rack and pinion powered steering provides reasonable feedback for the class and fairly good response resulting in competent handling. I mentioned earlier that all Elantras come standard with DSSM featuring Comfort, Normal and Sport settings, allowing driver selectable steering feel that makes a difference. I kept mine in its stiffest Sport setting most of the time, although I could appreciate why someone might want to leave it as is in Normal or even opt for Comfort mode, depending on driving styles or the terrain being covered. Even in Sport mode I couldn’t go so far to say that slicing and dicing back country roads is the Elantra’s forte, Hyundai making a number of better suited models for such tasks, but it more than holds its own when called upon, the 17s on my tester no doubt helping.

Standard four-wheel discs also set the Elantra apart from some peers that come with rear drums in base trim, while ABS, electronic brake-force distribution and emergency brake assist can be critical when needing to stop quickly, in the same way that standard traction control, electronic stability control and vehicle stability management keep the car aligned with its lane in slippery conditions when things might otherwise get out of hand. The Elantra also gets active front headrests to protect from neck injuries, front seatbelt pretensioners to lock you in place during a crash, and the segment’s usual six airbags.

Of note, last year’s Elantra sedan was a Top Safety Pick by the IIHS, which bodes well for this 2016 model, while this latest Elantra sedan earned a best possible 5-star safety rating from the NHTSA. What’s more, the Elantra tied for second place amongst compact cars in the latest 2015 J.D. Power Initial Quality Study (IQS), while the Hyundai brand ranked fourth best out of 33 total auto brands available in North America.

While there are a number of key elements that make the Elantra a standout entry in the compact segment, it’s the sum of its parts that cause it to rise above the majority of its competitors. It’s a great looking four-door that follows up its style leadership with strong performance in all trims, while also delivering impressive roominess, loads of standard and optional features and over-the-top luxury in top-line Limited guise. On top of it all Hyundai endows the Elantra with a longer than average comprehensive warranty that lasts five years or 100,000 kilometres, making it an even better deal.

It used to be that Hyundai stood for a good car at a great price, but I have to say that more often than not these days the South Korean brand is selling some of the best cars in their respective classes at superb value. This 2016 Elantra, for example, can be had for as little as $13,799 after a no-haggle $2,000 discount, plus $1,695 for freight and pre-delivery prep. That’s not just a good deal. That’s a great deal, for a very impressive car. Don’t take my word for it. I’m betting more than 50,000 Elantra owners a year will agree. Sometimes it’s better to follow the crowd.
©(Copyright Canadian Auto Press)
Car Shopping Tools