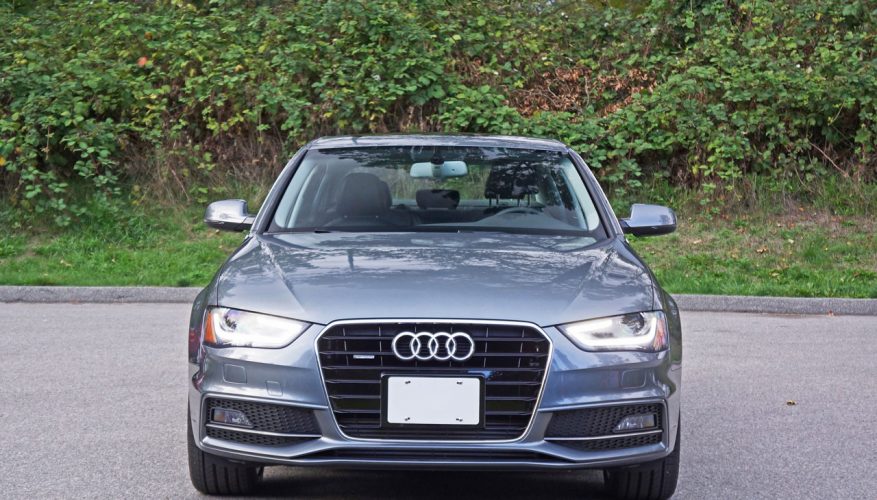 By: Trevor Hofmann
Style is an Audi trademark, not that they can enforce it by law. We’ve witnessed others copy some of its design elements over the years and rather than fight back the German brand takes it in stride. Of course, buyers know the difference between an imitator and the real deal, and Audi has never been about aping the latest trend. They’re an automaker that’s made its mark with innovation, being the first premium brand to promote the merits of all-wheel drive en masse to the point where Quattro is a near household name. All other luxury brands have now followed Audi’s AWD lead, while the Ingolstadt-based company was also one of the first to embrace turbocharged four-cylinder power, now another market mainstay.

On that note I suppose it could be said that Audi innovated the big grille era too. The A4’s hexagonal singleframe grille is large for sure, but it’s proportionally sized to this D-segment four-door fashion statement. S Line trim is standard kit, which means the grille gets glossy black slats and rungs, while the LED-enhanced projector headlamps at each side look beyond brilliant, if you don’t mind the hardly risqué or indecent double entendre. Some might grammatically misuse the term racy to describe the look, while the sharply detailed lower air splitter makes it look like the A4 is capable of much more than mere wordplay, the standard LED fogs seeming subtle in its midst. Ditto for my Progressiv trimmed tester’s spindle-thin 10-spoke alloys on 245/40R18 Pirelli Cinturato P7s, while the A4’s LED taillights look simple yet elegant above a lower rear valance with sporty twin chromed pipes poking through an even sportier open mesh grate. The A4 might not look new, but it definitely looks good.

It isn’t new, of course, this eighth-generation B8 A4 having been on the market since the 2009 model year after which it was given a mid-cycle update for 2013, and while some body styles have come and gone and V6 power relegated solely to supercharged S4 status, this four-door, turbocharged four-cylinder, automatic-equipped, Quattro AWD configuration has long been the most popular.

For 2016 all A4 models get Audi’s direct-injection turbo 2.0 TFSI four making 220 horsepower and 258 lb-ft of torque. Base models get a continuously variable transmission with front-wheel drive, and while a six-speed manual gearbox is also available I was handed the keys to an eight-speed Tiptronic automatic version that’s actually the quickest of the three with a 6.4-second sprint to 100km/h compared to 6.6 for the manual and 6.8 for the CVT, while all three are speed-limited to 209 km/h (130 mph), although I never even attempted to validate this claim.

I did, however, substantiate Audi’s claim of “unparalleled traction and control” for all-wheel Quattro models, its speed-dependent electromechanical power steering, plus five-link double-wishbone front strut and trapezoidal link rear suspension setup combining for fabulous road-holding no matter the situation, ideal for making the most of the turbo four’s lively personality and eight-speed Tiptronic automatic’s smooth, precise gear changes. Over inner-city roads it was as comfortable as cars in the D-segment get, easy to maneuver in and out of traffic with good visibility all-round, and then out on the freeway it once again showed that it’s a step above most rivals by effortlessly tracking straight and true at high speeds despite delivering better than average quietness and ride quality, yet it was amid tight, fast-paced corners that the A4 truly came alive, its compliant suspension producing the same types of canyon carving reactions as harder sprung competitors, while unshaken and thoroughly comfortable over rougher patches.

That’s with the A4’s standard Audi Drive Select system set to Auto, by the way, a softer Comfort setting plus a more sporting Dynamic mode still available from a button on the dash and readout on the MMI infotainment system, as well as a self-programmable Individual setting allowing some personal tuning. The A4’s standard binders mean business too, incorporating the usual active safety gear as well as automatic disc wiping to ensure a clean surface for the best possible performance.

That FWD CVT equipped base model I mentioned earlier starts at $38,500 plus $2,095 for freight and pre-delivery prep, while my $42,800 automatic with Quattro, priced $1,600 more than the manual with Quattro, gets the larger 18-inch rims and rubber I mentioned earlier, as well as 60/40 split-folding rear seatbacks that open up the 351-litre (12.4 cubic-foot) trunk to 962 litres (34.0 cubic feet) of potential loading space. This is where Audi Canada’s numbers don’t jive, however, as other jurisdictions quote a 480-litre (17.0 cubic-foot) trunk, which seems more realistic when visually sizing it up against competitors. It’s a nicely finished cargo area either way, with premium carpeting, quality sidewalls and cool chromed metal tie-downs.

My Progressiv trimmed tester included the wheels I spoke of earlier while surrounding the side windows with chrome and adding beautiful aluminum inlays inside, plus a much better looking colour multi-information system than the base monochrome one, driver’s side memory, auto-dimming rearview and side mirrors, a garage door opener, tri-zone auto HVAC with simple rear controls, a navigation upgrade for the MMI, Audi’s Parking System with always useful rear parking sonar plus a rearview camera, etcetera.

While Audi offers a Sport package that enhances Progressiv trim by adding a sport suspension, a three-spoke sport steering wheel with metal-look paddles, stainless pedals, sport seats, and lots of black detailing inside and out for only $900, my tester didn’t include the upgrade that would’ve been worth it for the steering wheel shifters alone. It also didn’t include any standalone options such as adaptive headlights at $300, rear side airbags for $500, and tire pressure monitoring for $350. My test car’s Monsoon Grey metallic paint added $890 to the final tally.

Of interest, the A4 can be upgrade to top-line Technik trim too, adding twinned five-spoke 18-inch alloys, an adaptive damping suspension, adaptive headlamps, Bang & Olufsen audio, heatable rear seats, and Audi side assist. The same Sport package or alternatively an upgraded S Line Sport package or an even more complete S Line Competition Package can be added to Technik trim as well, while the standalone options list grows too.

All said, while some of these upgrades can transform the look of the car from classy four-door to track-ready slalom star, none goes very far in changing the way it drives. Certainly larger diameter wheels with a fatter contact patch give it a little more grip when pushed hard, while the upgraded adaptive suspension simultaneously enhances ride quality and handling, but the inherent goodness built into the A4’s basic design makes it one of the most appealing D-segment sport-luxury sedans on the market no matter which trim level chosen. My mid-grade Progressiv tester proved this, providing excellent dynamic stability in a totally comfortable well-made, beautifully finished package.
©(Copyright Canadian Auto Press)
Car Shopping Tools