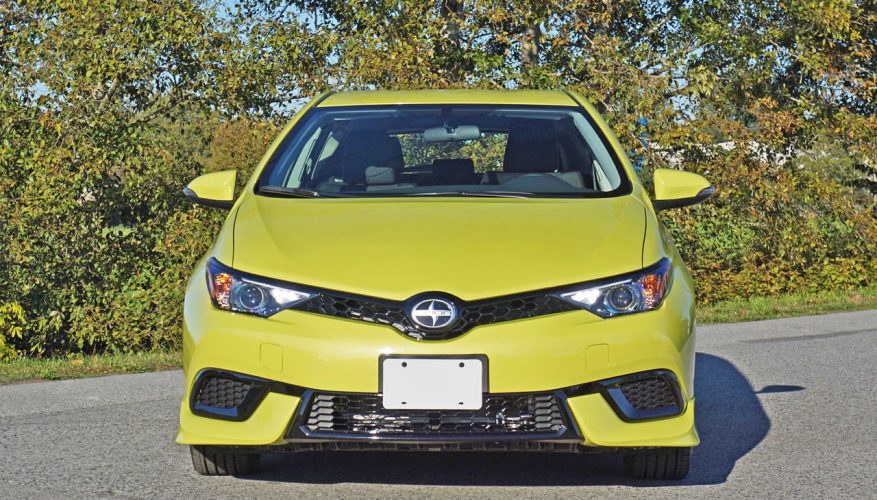 By: Trevor Hofmann
Unlike other Scions, the iM isn’t trying to hide its heritage. The Scion badge on its sweptback grille could just as easily be swapped out for an identically sized and shaped Toyota logo, as I’m sure many compact sport buyers will do. And why not? A slightly less aggressively kitted out version sells as the Toyota Corolla Auris Hatchback in European markets after all, so while there’ll be some who’ll want to differentiate themselves from their parent’s Corollas and Camrys by driving a sport-tuned Scion, the rest of us can enjoy the fact that it’s really nothing more or less than a tried and tested Corolla under its sleek and stylish skin. Well, at least nothing more than a Euro-spec Corolla… more on that in a moment.

It certainly looks good. My tester’s bright yellowish Spring Green paintwork snapped necks and locked in eyeballs as I drove by, while its glossy black details added to its sporting edge. Premium touches enhanced the already stylish five-door, including LED-infused projector headlamps, turn signals set into the mirrors, and gorgeous machine-finished 17-inch rims with grey painted pockets on 225/45R17 Bridgestone Ecopia all-season rubber just below. The design is underscored with a complete aero body kit that might seem over the top for conservative types, yet it’ll be ideally understated for this Scion’s target market.

As exciting and sporty as the iM’s rakish exterior looks, there’s no way its outward appearance could’ve prepared me for its impressive interior. Believe me when I tell you that this little compact is eons beyond anything else in its mainstream volume class when it comes to premium refinements, and even better than some so-called luxury compact models. A hardy “Well done Scion!” is deserved, and those who know my writing style will attest that I don’t use exclamation marks often, and when I do it’s usually to draw attention to something bad. Not so here, however.

Normally I mention soft-touch surfaces as a bonus within the compact mainstream segment, and the same is true for the iM, but the quantity as well as the quality of such materials, plus the way everything is put together, sets it far apart from any rivals. First, the entire dash top is soft synthetic, right up to the nearest edge where it neatly comes together with a thin strip of dark grey trim that incorporates a digital clock amid twinned vents at centre. Below this, to the left of the driver and ahead of the front passenger, is another large piece of soft padded synthetic material, the latter extending under the vents just mentioned, as well as above and below the HVAC controls, while an even softer padded and stitched leather-like treatment covers a section below the passenger-side instrument panel and centre stack, done out in a nice light grey no less.

Stylish aluminum-look accents and glossy piano black lacquered surfacing enhances the centre stack, whereas the lower console gets a much appreciated padded and contrast-stitched section for resting the driver’s knee, matching the leather-wrapped shift knob, boot and handbrake lever, as well as the leather-clad steering wheel above. A sweet looking high-gloss black gets used for the shifter surround and knob garnish too.

Each front door panel is also impressive, with a leather-like soft touch upper and woven cloth inserts just below, plus the same black fabric used for the attractively styled armrests, although stitched with light grey thread that matches the centre armrest bin lid and elsewhere around the cabin. Long glossy black door pulls highlight the side styling, while capping everything off inside is a high-quality woven fabric roofliner that continues down each front A-pillar for an even more premium ambiance. Yes, this is serious luxury kit for such a well-priced compact hatch.

It starts at just $21,165 plus $1,695 for freight and pre-delivery prep, by the way, while my auto-equipped tester added another $825 to the bill for a total of $21,990 plus freight. As with most Scions the autobox is the only upgrade, the standard features list a lot more comprehensive than anything else in this class. Along with the features already mentioned, the iM gets automatic on/off halogen headlamps, LED daytime running lights, LED taillights, remote access, heatable powered mirrors, a tilt and telescopic leather-wrapped multifunction steering wheel, cruise, a 4.2-inch colour TFT multi-information display, a large high-resolution seven-inch Pioneer infotainment system with great graphics and a reverse camera, Bluetooth, voice recognition, and six-speaker AM/FM/USB/AUX audio with Aha, internet radio, POI search, Gracenote, etc., plus dual-zone auto HVAC, variable intermittent wipers, illuminated vanity mirrors, an overhead console with a sunglasses holder, and two of the best non-Recaro sport seats I’ve ever experienced in a compact car.

While this standard list is long and impressive, a number of missing features point out the Scion brand’s main flaw, a near complete lack of options. Where’s the sunroof? I’m not a big proponent of regular front sunroofs, but the panoramic glass roofs that are now all the rage have won me over, yet there’s nothing of either sort available with the iM. It’s also missing other features that you can get in some competitive hatchbacks, albeit higher priced ones. Still, I could see some folks willing to pay thousands more for proximity access with pushbutton start, a powered driver’s seat, an auto-dimming rearview mirror, even higher end audio, heatable and/or ventilated front seats, heatable rear seats, leather upholstery, larger alloys, or a more powerful engine upgrade plus other sport-oriented goodies.

That said you can get a number of accessories including an upgraded infotainment system with navigation, the Bongiovi Acoustics DPS audio upgrade that’s been offered with Toyota/Scion models for a long time, boasting real-time digital audio streaming and four-channel digital amplification, plus the usual dealer add-ons such as a cargo liner, cargo net, hood deflector, rear bumper protector, paint protection film, and block heater.

As far as practicality goes those comfortable front seats are also reasonably sized for most body types, while the rear seating area is amply good for three adults abreast, although it would be more comfortable for two as is the case with most compacts, especially since a flip-down armrest offers a place for drinks.

Its 588 litres (20.8 cubic feet) of cargo capacity behind those 60/40 split rear seats makes it roomier than some compact hatchbacks, but not as commodious as others, although I certainly didn’t find it short on space, while those rear seats fold down easily enough and feel really solid when put back into place. This high level of quality workmanship permeates the entire car, something that’s hard to put a price on, but certainly can help car ownership love last far past the honeymoon stage. Of course this is hardly news to Corolla owners.

That Corolla in mind, remember when I mentioned that the iM is nothing more or less than a tried and tested Corolla under its sleek and stylish skin? And then teased that this is at least true for the Euro-spec Corolla? Yes, I must admit that the Japanese-built iM is a little more enticing than its more commonplace domestically assembled platform-sharing compatriot. First off, the engine behind that slick shiny black grille is a combination of all the best Corolla bits and pieces, its feisty 137 horsepower and 126 lb-ft of torque the result of a slightly detuned Valvetronic-enhanced 16-valve, DOHC, 1.8-litre Corolla LE Eco four-cylinder, while its transmission lineup is another best of both worlds scenario, the base model getting the six-speed from the Corolla S and the upgraded version that I drove endowed with the enhanced continuously variable transmission with Intelligent Shift (CVTi-S) used as the option in that same sportiest Corolla S.

It gets a Sport mode that actually does something, incidentally, unlike some others in the compact segment. Revs are allowed to climb substantially before the CVTi-S’s pseudo gears shift, and the shifts are quick, although they don’t feel as precise as with a sport-tuned torque-converted automatic or a dual-clutch automated gearbox. No paddles mean that it’s up to your right hand to execute the process unless left to it’s own devices, which is the only way the iM doesn’t measure up to the sportiness of the Corolla S that gets standard finger flickers behind each steering wheel spoke.

Rotate the Scion’s thick leather-clad steering wheel and turn-in is quite reactive while handling is comfortably crisp, Scion finding a nice balance between sport and casual thanks to the Euro-spec Corolla’s greatest gift, an independent rear suspension (IRS). Yes, while our Corolla’s twist-beam rear suspension setup is more than adequate for normal driving and even good enough for a little fun through tight fast-paced corners, the iM’s more advanced multilink design feels more stable at high speeds and really makes a difference when hitting uneven pavement or even worse, a pothole or frost heave mid-corner. Such occurrences can really unsettle a torsion beam setup, while the iM’s pricier design flies along without any concern whatsoever. The IRS makes for a more comfortable ride as well, especially for those in back, while the iM tracked wonderfully at highway speeds too.

With discs at both ends and all the usual active safety kit joining Scion’s regular bevy of passive safety features, which include a driver’s knee blocker and front passenger seat cushion airbag, it’s a confidence inspiring five-door. While the IIHS and NHTSA have yet to crash test the iM, its good to know that Scion regularly gets Top Safety Picks and 5-star ratings from these institutions, and it’s also comforting news that the Corolla Auris this car is based on achieved a best-possible 5-star Euro NCAP rating, all boding well for the iM’s crash tests here at home.

At the end of my weeklong test nothing but positive comments filled my notes, and now that I’ve learned yet more from poring over research material it all makes perfect sense. We’ve all long been told that Europeans expect more from their compacts, something I’ve experienced first hand while traveling through the continent and living in the UK, not to mention the numerous times a global manufacturer has rebranded a Euro-spec model for our market and given it to me to test. GM did it with a bevy of rebadged Opels under its now defunct Saturn brand, while Ford made us all wonder why they just didn’t send us their Euro-spec Focus years earlier. Now its Toyotas turn to wow us with a turncoat European, and while it comes with all of the upgrades we expect from an Autobahn-bred eurocrat, this one looks even better than the Toyota version from across the pond.

So how will it do? Here’s hoping enough Toyota buyers walk across their local dealership to the funky Scion stand and take notice, or even better that some of those dealers place these little gems right where the now discontinued Toyota Matrix used to sit. It might be a tad smaller than that ultra-popular model was, but it fills the same shoes and does so in a much better looking, way more refined, and expectedly more efficient package. It’s quite possible that the iM will be able to capitalize on these disenfranchised Matrix owners, which could make this little Scion the much-needed hit they’ve needed, potentially even doubling the brand’s sales if it lives up to previous Matrix numbers. No doubt Toyota’s Scion division has its collective fingers crossed, and I have to admit mine are too, along with two thumbs that are pointing straight up. Kudos to Scion, as the iM is a superb little compact that deserves everyone’s respect and your complete undivided attention.
©(Copyright Canadian Auto Press)
Car Shopping Tools