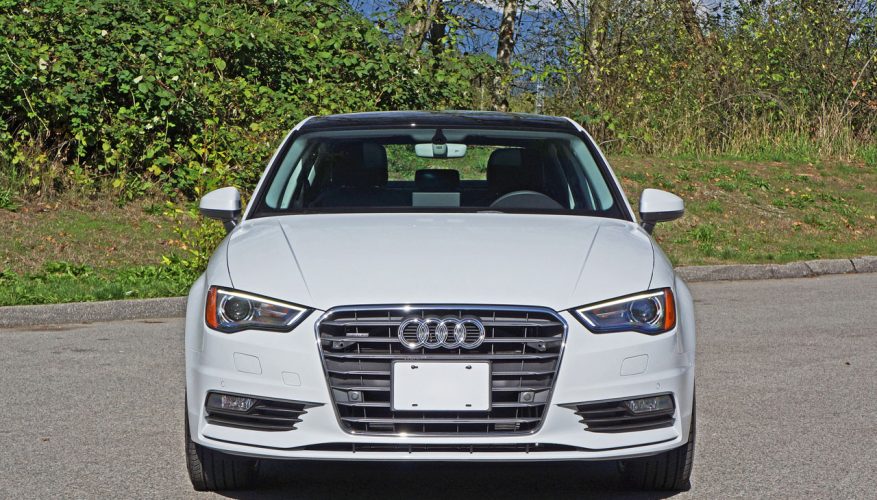 By: Trevor Hofmann
There’s only one better compact sport sedan in the premium sector than Audi’s A3, and that’s the same brand’s S3. Having already covered that sportier model in 2015 trim, I await a second turn at the wheel with eager anticipation, although another spin in the A3 2.0 TFSI Quattro is certainly a good way to wile away the time.

If you’re a fan of Audi’s big, bold grille, LED enhanced lighting elements and chiseled flanks, the new A3 sedan will certainly fit your preferred style. From the front and profile it looks just like most other Audi sedans, only smaller, while its blade-shaped taillights are uniquely elegant. My tester rode on a neat and clean set of simple silver 10-spoke alloys on 225/45R18 Continental ProContact all-seasons, while up top about two-thirds of the rooftop gets covered in black glass making it appear as if there’s a panoramic moonscape from below, but in reality it’s just a nice large sunroof shedding light on the front half of the passenger compartment.

On that note I love the A3’s minimalist interior, from the simple curved dash top to the TT-inspired aluminum-rimmed circular vents it’s a contemporary design buff’s practical dream car. A pop-up infotainment display can be hidden away when not needed, keeping the lines of the dash clean and uncluttered, all controlled by a perfectly symmetrical collection of buttons within easy reach on the lower console, these surrounding what might be the auto industry’s largest metal-edged rotating knob, complete with a shiny black top that allows touch-sensitive finger gestures (keep your “finger gesture” thoughts to yourself, that’s Audi’s term). Back up on the stack, a beautifully simple thin strip of ancillary toggles sits just below the two centre vents, while an efficiently packaged dual-zone auto HVAC panel is housed underneath. Down on the lower console again, the layout of the gear selector, ignition button, audio volume dial, and the aforementioned MMI infotainment control panel is eye candy to design devotees and relief to those who suffer from OCD, the entire interior as well laid out and efficiently packaged as this class gets.

As far as perceived quality goes, or rather the touchy, feely sense of quality most premium badged cars exude, the A3’s dash top gets a higher grade of soft-touch synthetic than you’ll find in the majority of mainstream volume branded compacts, at least those that actually include pliable plastics, while this treatment extends down to the halfway point of the instrument panel, as well as over to the front and rear door uppers, also ending about halfway down the doors where harder plastics take over. This is par for the course amongst compact premium players, extended soft-touch not available until moving up into larger, pricier models. The A3’s materials quality plus fit and finish worked well for me, and I’m a stickler when it comes to such issues, while the switchgear was mostly tight, evenly spaced and well damped, again exuding that quality feel.

As you might expect, the A3 isn’t as roomy as Audi’s A4, but it was nevertheless amply large for my five-foot-eight frame. Granted I’m not a hulk of a man, nor is my 95-pound, five-foot-even partner an Amazon woman, but there was still much more room than we could use. It’s only when venturing into the rear seating area that larger folks might feel a bit cramped, as there was a mere inch above my head when sitting in back, albeit plenty of legroom.

This brings us to the trunk, which is quite sizable for such a small car. Audi claims 425 litres (15.0 cubic feet) with its rear seatbacks upright and 800 litres (28.2 cu ft) when they’re folded flat, which makes it the class leader by far. Those rear folding seats are split 60/40, while a large centre pass-through is ideal for multiple skis and poles when the outboard seats are in use, making it perfect for a fuel-efficient trip for four to your favourite slope, with the added confidence of Quattro to get you there safely. Up until recently you could get an A3 Sportback version with up to 480 litres (16.9 cubic feet) of gear toting capacity behind its rear seats and even more than the sedan when tumbled down, but it was only available in “clean diesel” here in Canada, so for the time being, for reasons you are likely very aware, its unavailable. It didn’t include Quattro anyway, so it wasn’t the best all-season family hauler.

Powertrains in mind, I can’t see Audi losing a lot of A3 customers now that the car is only available with two gasoline-powered engines. The base 1.8-litre mill puts out impressive numbers for the car’s 1,440-kilo (3,174-lb) curb weight, with 170 horsepower and 199 lb-ft of torque allowing for a 7.7-second sprint to 100 km/h and a tire-regulated top speed of 209 km/h (130 mph), while my as-tested 2.0-litre TFSI is even more energetic thanks to 220 horsepower and a sizable 258 lb-ft of torque, good for a 6.3-second charge to 100 km/h and an identical terminal velocity. Both engines benefit from direct-injection and turbocharging, while a six-speed dual-clutch automated S tronic gearbox featuring manual-mode at the shift lever comes standard.

With Quattro all-wheel drive utilizing all four contact patches below, acceleration was brisk from standstill right up to highway speeds and beyond, while the little A3 loves to stretch its legs on the open road, more than easily keeping up with faster paced traffic and, admittedly, difficult to keep down to posted speeds. This is a car for those who really enjoy driving, although maybe I should reword what I just said, because if you currently don’t enjoy driving you should probably test out an A3 to see if it’s the process of hitting the road that leaves you flat or the vehicle you’re strapped into.

The A3’s heightened enjoyment factor is especially notable when the freeway turns to two-lane highway, or better yet, a two-lane back road winding its way down a rocky coastline or up through a mountain pass. Let’s remember that Audis hail from Ingolstadt, an area in Germany that’s not too far from Austria’s Alps (I made the trip from Salzburg in a quick afternoon, paid rest area biffy break included, albeit I hit 285 on some stretches while at the wheel of an A8 TDI), let alone roads that intertwine through Germany’s own Black Forest. I took opportunity to test the A3 Quattro’s handling mettle right here at home, and found it especially capable through high-speed fast-paced corners, its low mass and well sorted chassis ideal for slaloming through S-turns, diving deep down into sharply undulating verticals no matter the clip, with nice, crisp response to steering input and superb braking with very little fade after repeated stomps. The A3 is a thoroughly engaging car no matter the situation, the type of vehicle that gives its driver total confidence.

Priced at just $31,600 plus $2,095 for freight and pre-delivery prep, the A3 1.8 TFSI is a great value, although even at my 2.0 TFSI Quattro tester’s $36,400 price point it makes for a better deal than some rivals’ starting MSRPs. Both drivetrains can be had in base Komfort and mid-grade Progressiv trims, while opting for Technik trim also requires the larger 2.0 TFSI engine that comes standard with Quattro.

My tester was trimmed out in top-tier Technik guise, so access was via proximity-sensing keyless remote, both a reverse camera and navigation were added to the infotainment system, not to mention a crystal clear Bang & Olufsen audio upgrade, plus a colour multi-information display amid the primary gauges, Audi side assist to warn from approaching rear traffic that might be in your blind spot, plus front and rear parking sonar, altogether totaling a still reasonable $43,300.

Standalone features in Technik trim include a set of $450 rear side airbags, $800 worth of 19-inch twin-spoke alloys (which first require the S line package), and three no-cost exterior colours plus seven metallic hues for $800, while the interior can be finished in standard Black, Chestnut Brown or Titanium Grey, all at no extra charge. Lastly, you can get your interior inlays finished in a 3D-look silver, also at no cost.

As you can likely now appreciate, you don’t have to move up in size to feel thoroughly pampered in an Audi, the little A3 Sedan exactly what the premium compact segment needed and thoroughly capable of making the rest of the four-ringed family proud. It’s got the looks, interior refinement, features, and performance to wear Audi’s badge with pride, and should be the first car you check out in your search for a compact luxury model.
©(Copyright Canadian Auto Press)
Car Shopping Tools