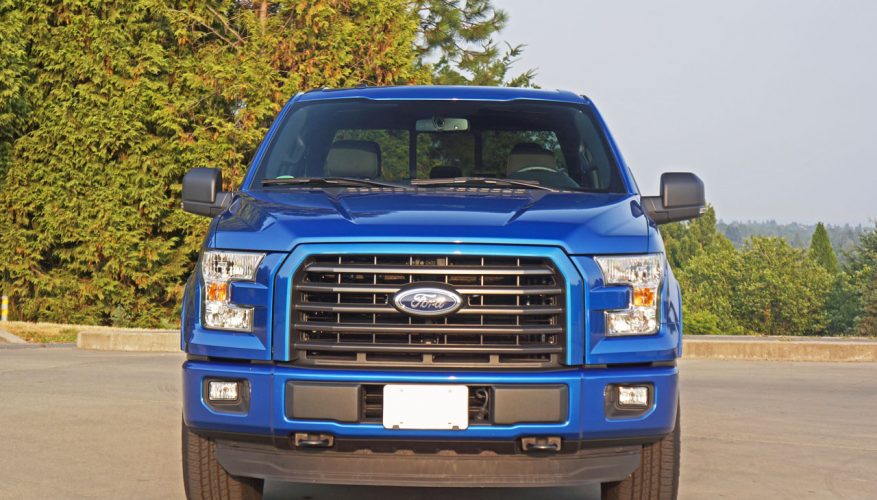 By: Trevor Hofmann
When it comes to rewriting the book on the truck industry, Ford has been leading the charge. The only thing more revolutionary than this new F-150 pickup truck is the Detroit plant it gets built in. Green is an understatement unless you’re looking at the grass and shrubbery its roof is covered in, designed to give back part of what it takes away from the environment. The truck itself is the first of its kind to be produced almost entirely of aluminum, while the engine in the model being reviewed here is the first four-cylinder I can remember ever being offered in a modern-day full-size pickup truck.

While lighter than its predecessor, powered by a more efficient lineup of engines, and therefore easier on your pocketbook day-to-day, it’s no less rugged looking or all-round capable than the truck that came before. Take a look at the front end and you’ll see a grille that must be the largest in F-150 history, while unlike some in the industry this one’s not trying to look like a big rig. Certainly it’s tall and wide and somewhat intimidating, but the grille, unique headlamp clusters, slightly domed hood, and subtly bulging front fenders aren’t attempting to play big boy highway rig in a little truck world. For this reason and many more it should continue to appeal to the millions of F-150 fans that make up the bulk of the light truck market, while the rest of the new pickup is shaped similarly to F-150s that have come and gone, including its kinked front windowsills, squared off cab, and notched taillight design.

It’s a good-looking truck front to rear, this particular model almost completely devoid of chrome, which is normally truck status quo. A body-colour grille surround with a black insert joins body-colour bumpers, matte black bumper pads, black mirror caps, box trim, and rear bumper steps. The side steps are also black, as are the retractable steps that access the rear box, whereas well hidden within the tailgate is a revised version of the F-150’s popular retractable tailgate step that’s now more efficiently designed and easier to use than the previous one. Finishing off my tester is a set of six-spoke alloy rims with grey painted spokes and pockets that look superb.

Inside, it’s a completely new F-150 too, albeit fans of the truck will feel right at home. In this just-above-base XLT model you’re not going to find any soft-touch surfaces across the dash, instrument panel, door panels, or centre console. Ford knows its core volume buyers and these don’t want to pay more for luxuries that don’t matter to them. Of course, the armrests are finished in a nice leatherette from sides to centre, the middle one even featuring contrast stitching, but the seats in this more utilitarian trimmed model are covered in a comfortable, high-quality mesh fabric in black with thin grey stripes running horizontally across the inserts. Ford has embellished the front and rear door panels with some chrome detailing that bookends a nice satin grey patterned applique with an engine-turned look, the same treatment covering a storage lid on the front portion of the centre console. Satin-finished darker grey flanks the centre stack and lower console, while it’s also used for the inner door pulls.

The majority of switchgear is high in quality, with tight fitment and good damping on almost every button, knob and toggle. Some of the rotating controls are rimmed in rubber and the others look like it, but are finished in a high-quality durable feeling plastic. Some interior highlights include a primary gauge package that’s clear and easily legible, especially its bright blue needles, while my tester featured a large full-colour TFT multi-functional display with a variety of features such as fuel economy history, average fuel economy, range, real-time fuel economy, a trip computer, compass, etc.

Initially Ford made headlines by saying its new F-150 was some 333 kilos (700 lbs) lighter than the 2014 model it replaces, although in truth an old model with its 5.0-litre V8 was being compared to a new 2015 model with the same 2.7-litre I-4 I’m testing here, and while the Dearborn, MI automaker has fair a point, the new 2.7 making a sizable 325 horsepower and stout 375 lb-ft of torque resulting in a payload of up to 980 kg (2,160 lbs) and trailering weight of 3,810 kg (8,400 lbs), which makes it a reasonable alternative to a V8 despite its smaller displacement, size and weight, the reality is a weight savings more in line with about 280 kg (617 lbs) on average, with the smaller Regular Cab lighter by about 260 kg (573 lbs) and the heavier Club and Crew Cabs nearly lopping 300 kg (661 lbs) from the truck’s total mass. While hardly the claims first made, these are still significant numbers that can certainly be felt from behind the wheel.

Takeoff with this turbocharged direct-injected 2.7-litre Ecoboost model is unsurprisingly quick and its acceleration doesn’t let down as speed ramps up, while the standard six-speed automatic delivers shifts that are amply quick plus smooth operation overall. Where the alloy diet has improved get-up-and-go it’s has also predictably allowed for nimbler handling, the F-150 now feeling the sportiest in the full-size class through the curves while still delivering stable, comfortable high-speed cruising on the highway. All-round, I like the way the new F-150 drives a great deal more than the old one, and there was nothing particularly wrong with last year’s truck.

Just in case you’re wondering whether all that lightweight goodness somehow hampers its safety rating, the IIHS made the new F-150 a Top Safety Pick for 2015 while the NHTSA gave it 5 stars, so rest assured it’s the safest in the pickup truck pack. None of its rivals achieved a Top Safety Pick rating while only GM’s half-tons managed 5-star crash tests.

As noted, my tester was kitted out in $30,049 XLT trim, which puts it one above the $24,899 base XL and three below the top-line $63,849 Platinum, with the $43,849 Lariat and $61,249 King Ranch filling in the blanks above (a redesigned Raptor won’t arrive until next year). That means it gets much of the XL’s gear, some highlights of which include active grille shutters, tilt and telescopic steering, a 2.3-inch TFT instrument cluster display with a trip computer, filtered air conditioning, a four-speaker AM/FM 4.2-inch display audio system, a 40/20/40 split front bench seat with fabric upholstery, a capless fuel filler, engine block heater, trailer towing provisions including a four-pin connector and ball-mount, hill start assist, all the expected safety equipment, plus two extra stereo speakers and a 60/40 split flip-up rear seat in the SuperCab model.

Looking at the photos of my tester might cause pause as you see some of its features not congruent with the XLT’s list. This is because my loaner was first upgraded with 4WD, a $4,650 option, after which the $1,750 XLT Sport package was added, featuring the black billet-style grille with a body-colour surround and black mesh insert noted before, body-colour front and rear bumpers, body-colour door handles and wheel lip mouldings, the gorgeous set of machine-finished 18-inch alloys with grey-painted pockets, accent-colour running boards, a “SPORT 4×4” decal on each box side, a chromed exhaust tip, a console-mounted shifter dividing the unique sport cloth seats and interior finish I also mentioned earlier.

The inclusion of the Sport package meant that either the XLT’s $3,100 301A or the $6,200 302A Equipment Group needed to be added, my tester including the latter which meant that all the former package’s features, including its manual-folding and heatable dual-power black side mirrors with integrated turn signals and driver’s side auto-dimming, auto-dimming interior mirror, reverse camera with Dynamic Hitch Assist, eight-way powered driver’s seat with driver’s side powered lumbar and manual lumbar for the front passenger, 4.2-inch “Productivity Screen” within the primary gauge cluster, power-adjustable pedals, leather-wrapped steering wheel, rear under-seat storage, rear window with fixed privacy glass and defroster, BoxLink bed tie-down system, and trailer tow package, were upgraded to include even more adjustable 10-way powered front seats with powered passenger lumbar on both sides, a power-sliding rear window, remote start, reverse sonar, heatable front seats, an eight-inch MyFord Touch infotainment system, a 110-volt household-style socket, and LED box lighting.

My truck also had an $800 navigation upgrade, a fabulous $1,750 twin-panel panoramic moonroof, the $650 BLIS blind-spot information system, $550 worth of spray-in bedliner, $300 retractable box side steps (love these), the $400 tailgate step (bar none one of the best features available in the pickup truck segment), and $200 worth of sensational Blue Flame paint, which is a subtotal of $11,350 in options for a total of $55,899 before its $1,700 freight and pre-delivery prep fee get added on.

Yes, that’s a lot of high-tech truck for the money, but I like the way it looks, love the way it drives, and was thoroughly impressed with its feature set. Ford needn’t worry about holding onto its significant sales lead with the impressive new F-150. Now it’s fans and owners have clear and concise bragging rights to be proud of.
©(Copyright Canadian Auto Press)
Car Shopping Tools