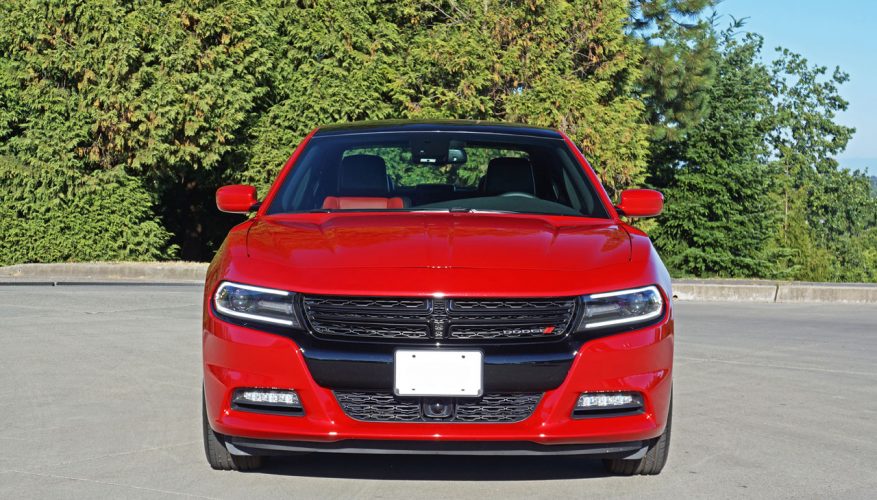 By: Trevor Hofmann
For 2015, Dodge has given its full-size Charger sport sedan such a significant mid-cycle refresh that it might as well be a complete redesign. Gone is the deeper more Ram-like grille and taller traditional headlights, replaced by a leaner, narrower crosshair with black mesh inserts that flows directly into slimmer ultra-modern looking LED-enhanced combination headlamps, a dark centre bumper cap joining a revised lower grille opening for what looks like one large deep grille when seen from a distance. I don’t know which version looks more intimidating, but this one is certainly slick, especially when all the black bits are high-gloss as was the case with my SXT Plus Rallye AWD tester.

The headlights get two thin rows of LEDs with a projector beam housed in their rearward sections, while just below a thicker row of LEDs gets fitted to each corner of the air dam, sharing space with a narrow brake-cooling duct. The entire look is as downright sophisticated as any ex-NASCAR-raced domestic has ever been, and while it’s somewhat slab-sided profile remains mostly unchanged it somehow looks leaner and more streamlined than the outgoing model.

Dodge bolted four of hottest looking stylized five-spoke 19-inch alloys around onto my upgraded tester, shod with 235/55R19 Michelin Pilot HXMXM4 rubber, and while more than adequately sized they somehow look a bit small on such a large sedan, the Charger needing 20s (which are optional on this trim) or even 22s to fill out those wheel cutouts, which unfortunately are left with rather large gaps between the upper tread of the tire and top point of the fender arch, allowing more visible suspension componentry than appreciated by this auto scribe, at least this side of the aforementioned Ram 1500.

This is the only visual spoiler in a design that’s ideally penned for those who gravitate towards aggressive behaviour, at least from behind the wheel. From profile, its indented crease lines that circle around the halfway point of each front door and then bleed off into the rear door panels before the topmost one visually flows along the beltline into the rear deck lid that gets topped off with a subtle yet still sporty rear spoiler, it looks athletic for such a large four-door, while the Charger’s rear portions are highlighted by Dodge’s trademark “racetrack” single taillight section that floats above a thick rear bumper and matte black diffuser-style lower valance that integrates attractive chromed exhaust tips on each side.

As noted, my tester started with SXT Plus trim at $39,090, plus $1,695 for freight and pre-delivery prep, and then added an advanced AWD system with an active transfer case featuring front axle disconnect for an additional $1,900. On top of this Dodge included the $1,395 Rallye package that seems pretty inexpensive considering its upgrade to an R/T front end, a gloss-black grille and fascia applique, body-colour rear spoiler, 300 horsepower engine upgrade (from the base model’s 292 horsepower), steering wheel-mounted shift paddles, driver selectable Sport mode, BeatsAudio upgrade with a 552-watt amp and 10 premium speakers with a sub, and of course a Rallye badge, but at that price and it’s a no-brainer for anyone buying a mid-grade Charger.

Dodge also offers a $495 Driver Convenience group with rear parking assist and a backup camera, but my example was bumped up to the $875 Navigation and Backup Camera group that added GPS navigation to the standard full-colour high-resolution 8.4-inch touchscreen Uconnect infotainment system that also includes satellite radio and Bluetooth hands-free phone connectivity with audio streaming.

Despite my tester’s black carbon-fibre decaled roof it didn’t include the $1,395 optional powered glass sunroof, the former a cool looking contrast to any exterior colour or shade except standard Pitch Black or optional Phantom Black Tri-Coat Pearl. Dodge paid homage to its colourful past by finishing both exterior and interior of my tester in racy red, which looked fabulous on the outside, although there was so much red soft-touch and hard plastic inside that it was almost uncomfortable. Then again it brings back good memories of being a kid and falling head over heels for some of the gorgeous red interiors that were fashionable in the ’50s and ’60s. I’m going to guess that folks my age are the target market for this interior, especially those who missed out on the muscle car era due to a lack of finances and now, with pockets full of empty-nester cash, have a little extra to throw into something special. Nice then that the Ruby Red and Black interior is a no-cost option, although you’ll need to spend $300 for the gorgeous Redline Tri-Coat Pearl exterior paint. That carbon black roof, incidentally, will set you back a cool $1,395.

The black and red leather seats were extremely comfortable with lots of power adjustability, while other premium touches included a soft synthetic dash top and instrument panel facing, as well as soft door uppers, inserts, and armrests. Some surfaces are done out in a rubberized plastic while others are finished in a padded leatherette, complete with attractive stitching in a nice striped pattern. The soft-touch treatment even goes all the way down to the inner panel of the lower console, protecting knees in ways that many premium brands don’t even attempt to. Dodge has even gone so far as to wrap all the pillars in the same high-quality woven fabric as the roofliner, a good play for luxury buyers looking for a little more muscle in their lives.

The primary gauges are set up in a traditional two-dial design boasting a 7,000-rpm tachometer to the left and 260-km/h speedometer on the right. In between is a large seven-inch full-colour TFT multi-information display incorporating every type of gauge one can hope for including lane guidance, engine temperature, instant fuel economy, a trip meter, average fuel economy (which was rated at 13.9 L/100km after an enthusiast week’s drive), expected range, or a big digital speedometer. Hit the arrow up button on the left steering wheel spoke and you’ll get driver assist information, or do so one more time to get tire pressure information. Another flick replaced the large digital speedometer with messages, audio controls including radio station info, trip information, and more, with the right and left buttons swap functions within each feature. Got that? Suffice to say it’s fully fleshed out.

Atop the centre stack is that large 8.4-inch infotainment touchscreen I mentioned earlier, complete with radio, media, seat controls, climate controls, navigation, phone, and vehicle settings. The heatable seat controls on my tester included ventilation with two-way high/low settings, while heated steering wheel and mirror dimmer “switches” sat nearby. Just below the infotainment display, an more traditional yet still easy-to-use interface allowed dial and button access to the Sport mode noted earlier, plus an impressive sounding audio system, electronic driving aids, and more, while the Charger’s dual-zone auto HVAC switchgear was placed just below that. All of this analog-looking kit is duplicated in the infotainment screen too, allowing Dodge to fully serve the new digital demographic while not forgetting its longtime old school buyers.

I should also mention that Dodge surrounds the primary gauges and infotainment display with a nice patterned metallic surfacing that’s duplicated around the shifter as well, while there’s plenty of aluminum-look trim and chrome detailing throughout the cabin for a really appealing ambiance.

By the way, the “Plus” designation in the SXT Plus trim level means that this model comes with the aforementioned bi-functional HID projector headlamps with black bezels, heatable steering wheel, Nappa leather heatable and ventilated sport seats, all of the memory and mirror functions noted earlier, and the powered front seats with four-way lumbar, plus it also adds front overhead LED lighting, driver and front passenger lower LED lamps, heatable second-row outboard seats, a rear seat armrest with storage and illuminated cupholders, and a set of 18-inch polished alloys with graphite pockets that were replaced by the Rallye’s 19s.

The eight-speed auto shifts seamlessly unless pushed hard at which point it swaps cogs with a more pronounced precision, the Sport mode and paddles noted earlier enhancing the overall driving experience. The gearbox is a good match for the Rallye V6’s 300 horsepower and 264 lb-ft of torque, which I found ample for quick takeoff and more than enough highway passing power, while the Charger tracks straight and true at high speeds and takes to corners with extreme agility. It incorporates a fully independent suspension with a rear-drive layout that inherently delivers better handling, even when all-wheel drive is added to the equation. All in all, I’d be surprised if you were disappointed with the Charger’s overall performance. Even its fuel economy is pretty good as far as full-size sedans powered by energetic six-cylinders go, with its five-cycle EnerGuide rating equaling 12.4 L/100km city and 7.7 highway with FWD or 12.8 city and 8.6 highway with as-tested AWD.

At the end of my test week I couldn’t find fault with this latest Charger. From exterior and interior style it hits its targeted clientele ideally while its fit, finish and features were impressive to say the least, especially that BeatsAudio sound system that made my teeth rattle. My Charger SXT Plus Rallye tester struck a good balance of comfortable roominess and reasonable economy, while providing a level of performance equal to its sporty design. If you liked the Dodge Charger before, I think you’ll love this new version.
©(Copyright Canadian Auto Press)
Car Shopping Tools