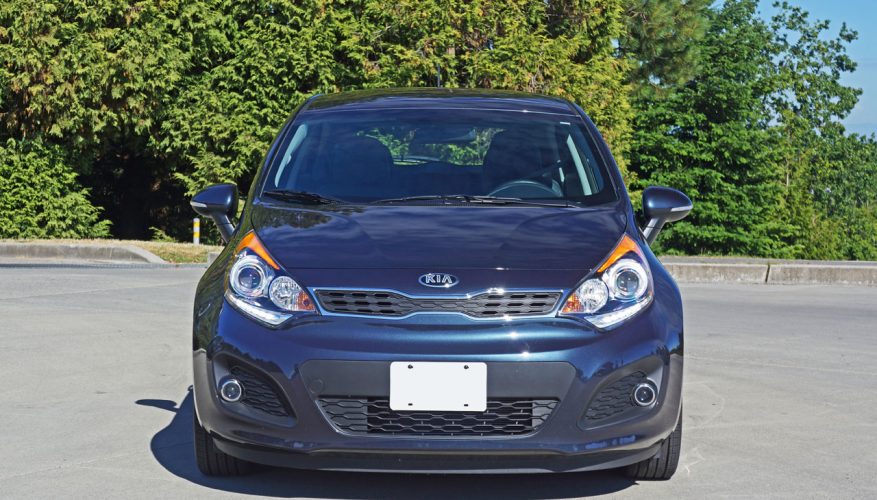 By: Trevor Hofmann
As far as the subcompact car segment goes, Kia is a serious contender. The Rio pulls droves of new car buyers into the South Korean automaker’s Canadian dealerships, building all-important market share the brand hopes will one day translate into more profitable compact to mid-size car and crossover sales.

While the compact Soul does well in its segment, Kia struggles to sell its three compact Forte models in similar numbers to more established players; ditto for the compact Rondo MPV, smallest Sportage crossover, midsize Optima sedan, larger Cadenza luxury sedan, excellent Sedona minivan, and shockingly good full-size K900 luxury sedan, and not because they’re somehow inferior, but more so due to Canadian buyers not having the brand as high on their collective radar. Subcompact buyers, however, know exactly where to find the best value, and the little Rio drives a very hard bargain.

For $14,095 plus $1,485 for freight and pre-delivery prep you can get into a very nicely equipped Rio sedan, whereas the arguably sportier Rio 5-Door will set you back a mere $400 more with a base MSRP of $14,495. While this car is impressive with standard powered locks and windows, powered heatable mirrors, a multifunction steering wheel connecting through a standard audio system with satellite radio plus USB and aux inputs, plus a standard safety suite that includes segment-leading four-wheel disc brakes, that’s not the car I tested recently. The car in the associated photos is done out in top-line LX trim, two levels above the base LX just mentioned and mid-grade EX that sits between.

I know it sounds like I’m rattling off features from a premium-badged model instead of a bargain-basement hatchback from a South Korean automaker that many still deem an upstart due to it only arriving here in 2001 for the 2002 model year, but there’s a reason so many loaded up Rio 5-Door SXs are zipping around town. You can even add on a larger infotainment system with navigation to the centre stack plus a nice glass sunroof overhead for another $2,200. Sweet!

I mentioned zipping because all Rios, from the sedan to this 5-Door, no matter the trim level, come standard with a fabulously fun four-cylinder engine. Easily one of the most advanced power units in its class, the Rio’s 16-valve, DOHC, 1.6-litre mill uses advanced technology like direct-injection and dual-cam variable valve timing (D-CVVT) to make 137 horsepower and 123 pound-feet of torque, while Kia’s Active ECO system that automatically adjusts the engine’s throttle mapping and transmission shift points for the best possible fuel economy, helps it achieve a five-cycle EnerGuide rating of 8.8 L/100km city and 6.4 highway with the six-speed manual or an even better 8.7 city and 6.3 highway with the six-speed automatic.

Yes, that’s not only good mileage but also an impressive set of transmissions. First off, most in this segment don’t offer a manual in their fanciest trim levels which gives the Rio SX an advantage in the sportier crowd, and second a six-speed autobox in the subcompact segment is a definite treat, especially one with manual shift mode via the gear lever and… wait for it… steering wheel-mounted paddle shifters! Yes, that’s right. DIY paddles in a subcompact hatchback! You’ve gotta love Kia right now.

The engine pulls strongly right from standstill up to highway speeds and beyond, while the ability to get fully involved from the fingertips puts the Rio 5-Door SX in a separate class of near premium subcompacts. I’m not going to say it handles as well as a Mini Cooper, but then again comparatively equipped it’s not priced as dearly as that little rocket either. All in all it holds its own on a curving back road, especially thanks to those aforementioned 17s that likely add to its firm ride, while yet another Korean exclusive feature adds a little spice to the already saucy package.

Most would probably be quite happy with the SX the way it is, but Kia went and added a driver selectable steering system that modulates the feel of the wheel from Comfort to Sport settings, with Normal in between. I personally prefer the Sport mode most of the time as it firms up feel while allowing for easy parking maneuverability, but I can see a place for Comfort mode too. I’m going to guess most will just leave it alone in Normal mode, but isn’t it nice to know you can dial in a little personal pleasure in a regular economy car?

Of course the Rio 5-Door is no regular economy car, I think I’ve made that point crystal clear. I haven’t mentioned styling yet, because you’ve got eyes of your own and will either love it or won’t care and nevertheless want to take advantage of its great pricing and full load of features, but at least you can go to bed knowing every car loving kid in the neighbourhood thinks your ride is as cool as mainstream subcompacts from volume producers get. Its lines were formed under supervision of ex-Audi designer Peter Schreyer as it is, so from the Rio’s signature “tiger nose” grille, past those LED-enhanced headlights, down its chiseled flanks to those previously noted LED tail lamps, you’ll be driving a bit of rolling artwork for the masses.

It’s not slouch inside either, where a high-quality premium-like soft-touch synthetic material covers the instrument panel from the left side of the driver, over the primary instruments, along the top of the centre stack and ahead of the front passenger, and even squeezing between the infotainment screen and HVAC controls, impressive for the class. The door inserts and armrests are done out in a comfortable padded leatherette, while Kia spruced up key areas in the cabin with upscale satin-silver and chrome detailing.

All of the switchgear is top-tier too, with well-damped, tight-fitting buttons and knobs, and it’s great looking kit, especially the row of toggles to the left of the steering wheel and under the HVAC interface, the latter also including an attractive digital display. Like everything else, Kia has given an element of style to simple controls, applying its outward magic on the inside too.

Other details pulled up from lesser trims include Bluetooth hands-free phone connectivity, illuminated vanity mirrors, map lights, a handy sunglasses holder, and get this, a glove box that’ll also cool your drinks. Even the audio system sounds good, although if it were my personal ride I’d opt for the larger screen with nav.

On a more practical note, the Rio 5-Door is roomy front and back, ideal for four adults yet capable of five, while 60/40 split-folding rear seatbacks expand the cargo compartment from an already sizable 425 litres (15.0 cubic feet) to a wagon-like 1,410-litre (49.8 cubic-foot) capacity.

On top of all this goodness is Kia’s superb warranty that endures for five years or 100,000 kilometers, giving you two extra years of comprehensive coverage than most competitors. If you want to get an idea of how valuable this standard feature is, just ask how much it’ll cost to add two additional years of aftermarket bumper-to-bumper coverage to another brand’s warranty.

Yes, the Kia Rio makes a lot of sense no matter which trim you choose. I happen to like the very car I drove, although as noted I’d upgrade the infotainment system at which point it transforms into a veritable subcompact luxury car with sporting pretensions, and a damn good looking one too.

Added to all this highfalutin talk is a higher JD Power Initial Quality Study (IQS) brand ranking than any premium nameplate other than Porsche. That’s right, out of 33 luxury and mainstream brands, the latter including Honda, Toyota, Nissan, Hyundai, Subaru, etcetera, Kia sits in second place with the least problems of all. That’s a solid step in the right direction.

From styling to performance, interior comfort and quality to its full load of features, I can’t recommend the Kia Rio 5-Door any higher. It’s the car I recommended to my dad and his wife a number of years ago, which they purchased and is still going strong, and the one that would most easily sway me if personal money were on the line.
©(Copyright Canadian Auto Press)
Car Shopping Tools