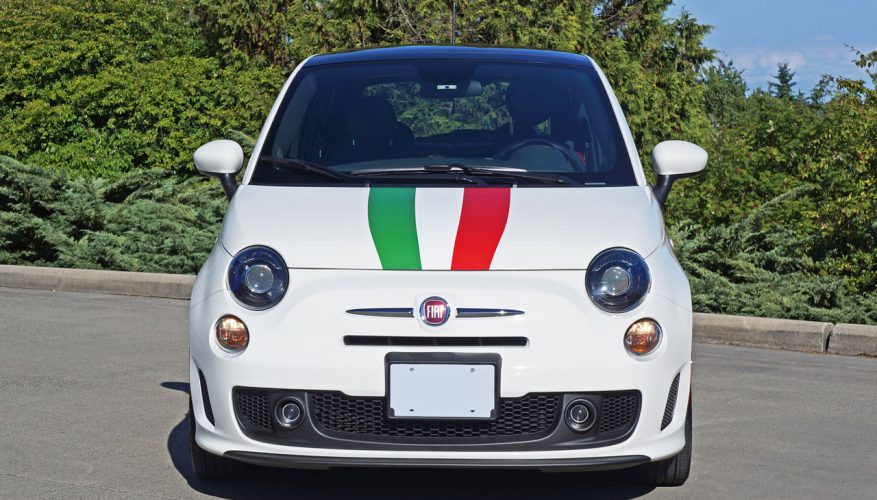 By: Trevor Hofmann
So you want a 500 Abarth, but finances aren’t allowing the $22.5k required? No problem, because Fiat’s been listening and now offers a sportier 500 Turbo that will do the job for just under $19k while you’re saving up for the world’s feistiest subcompact.

I haven’t met anyone who’s driven the Fiat 500 Abarth and didn’t love it, and I must admit the 500 Turbo had a similar effect on me. Ok, its sport-tuned single exhaust didn’t growl as impudently as the Abarth’s raucous dual pipes, the five-speed manual shifter I enjoyed in my last Abarth tester was replaced by an Aisin heavy-duty six-speed automatic with manual mode (although the five-speed stick still comes standard), plus the turbocharged and intercooled 1.4-litre MultiAir four-cylinder’s ultimate output gets tuned down by 25 horsepower and 20 lb-ft of torque when compared to the manual Abarth or 22 horsepower and 33 lb-ft when more appropriately put up against the autobox equipped Abarth, but at 135 horsepower and 150 lb-ft of torque, which happens to be 34-percent more grunt than the regular 500, it’s still a formidable performer considering its feather-light mass, while larger half-shafts and heavy-duty constant velocity joints exorcise any potential torque steer demons out of the front-drive layout.

Where the 500 Turbo’s engine is a jewel, from the sporty rasp of its exhaust to its spirited acceleration from standstill all the way up through the gears, the six-speed automatic is an engaging transmission too, shifting quickly and relatively smoothly for the class whether leaving it to its own devices or rowing it through the cogs via the console-mounted shift lever, albeit causing the mighty mite to use a little more fuel as shown by its five-cycle EnerGuide rating of 9.6 L/100km in the city and 7.3 on the highway compared to 8.5 city and 6.9 highway for the five-speed equipped model.

No matter which transmission is chosen the 500 Turbo gets a specially tuned sport suspension as well, not as edgy as the Abarth yet more livable day in and day out. Still, its response to steering input is ridiculously quick, the oft-used “go-kart” term appropriate in this case, while its ability to carve up serpentine stretches of back road is equal to the comfort and composure it exudes on the highway, where its high-speed stability is superb. This is a car you can drive fast even if you’re an intermediate driver; it rewards bravery. Then again city life is probably where the 500 Turbo is at its best, the tiny tot ideal for point and shoot traffic infiltration, capable of capitalizing on the smallest of openings before anything larger than a motorbike can react. At the same time its turning circle is surprisingly tight. I did a U-turn in a parking lot and actually started to laugh, surprised at how easily it swapped ends.

No less important, Fiat has upgraded the 500 Turbo’s binders to high-performance levels in order to compensate for its extra power, making its four-wheel discs capable of multiple high-speed stomps before even hinting at fade, and then quickly cooling off if left untouched for a few moments before getting back on them again.

It’s still got much of the Abarth’s go-fast look, too. Along with a uniquely designed front fascia with gloss black bezels around bi-functional halogen projector headlamps, the same gloss black bezels for the taillights and parking lamps, circular fogs embedded within a sweet looking front spoiler, bulging ground effects all-round that are especially noticeable on the side sills, plus a larger and sportier rooftop spoiler, my tester came fitted with green and red Italian racing stripes front to back, plus little flag-like emblems on each side, a set of gorgeous pewter silver coloured 16-inch alloys with black painted pockets and red accents encircled by 195/45R16 Pirelli P7s (the tires had to be Italian), not to mention bright red painted brake calipers peeking through from behind, giving the 500 Turbo a decidedly racy personality.

My tester’s Bianco (white) paint helped to show off some of the other sporty black elements too, like the mesh inserts in the lower grille opening, the lower lip spoiler, corner brake ducts, black glass roof, functional rear brake ducts, and large black diffuser on the lower bumper. Of course, the 500 wouldn’t be a true retro without some chrome detailing as well, the winged Fiat badge up front, door handle trim, license plate light garnish at the rear, and exhaust tip, all looking suitably throwback, although an original Cinquecento wouldn’t have had so large a tailpipe.

Tiny as it was, the first Cinquecento sold in big numbers, reaching 3,893,294 units during its 18-year tenure that ran from 1957 through ’75. The number sounds massive until realizing its Fiat 126 successor sold 4,673,655 units, but just the same I don’t think Fiat will be making a retrospective version of that one anytime soon. If you look at Canada’s numbers alone, you wouldn’t get a true perspective of how well the current 500 sells globally. Within three weeks of the 500’s European launch in 2007, the entire year’s production of 58,000 units had been sold out. We didn’t see the 500 along with the returning Fiat brand back on our shores until early 2011, my first tester being a 2012 model in Lounge trim, also in white although with fancy red and white leather upholstery. Needless to say I was impressed, our only complaint being rear seat headrests that protruded uncomfortably into the kids noggins. I’ve since tested a 2013 500C Abarth and 2014 500C Lounge (plus a larger 2014 500L), and I must admit that I’ve enjoyed every one of them.

Part of the love affair with the 500 is its interior, which is a mix of high-tech and yesteryear all rolled up into one. Fiat doesn’t waste money on soft-touch synthetic surfaces, the dash top harder yet still made from a nice looking textured matte finish plastic, as are the door uppers and pretty well everywhere else that’s not covered in fabulous looking body-coloured plastic surfacing. Only the armrests are appropriately cushy, although not as comforting as my tester’s optional sporty leather seats. This example received a stylish body-colour white, Rosso (red) and black interior motif that looked particularly festive and as period correct as one could hope for.

The switchgear is good for the class, while orange on black LCD displays fill the dual-pod centre stack. They’re not the big screens as found with some others, but that likely wouldn’t suit the 500’s style, and besides Fiat has bored a hole atop the dash for a custom-made smartphone holder that should be much more useful to most buyers than an expensive navigation-packed infotainment system upgrade. This said Fiat does offer a $495 optional TomTom navigation system that also fits into that slot. Additionally, Fiat fills the primary gauge package with an ultra-sharp seven-inch customizable digital display featuring a scrolling tachometer on the left, large fuel gauge on the right, and big speedo numerals at centre, all surrounded by various other readouts. It’s a wonderfully efficient setup that’s as modern as anything on the market, yet neatly fits within the 500’s classic oval shroud.

The silver-stitched leather-wrapped sport steering wheel is a lovely bit of kit too, as is the shifter knob with the same silver threading, while my tester’s red and black leather seats, complete with contrasting embroidered “500” badging on their upper portions, looked sensational and were amply comfortable with decent lateral and good fixed lumbar support plus a useful driver’s seat height adjuster, whereas the seats in the rear featured those same form over function headrests mentioned earlier.

Where the two front buckets offer plenty of room, the rear seating area is somewhat abbreviated, but smaller folks and kids won’t mind, and both front seats benefit from memory return so getting someone in and out of the back and then reseating yourself up front is an easy process. Those rear seats are split 50/50 and fold flat to make the rather compact 184-litre (6.5 cubic-foot) cargo compartment open up to a much more accommodating 496 litres (17.5 cubic feet), while a rear cargo shelf panel keeps personal gear away from prying eyes.

As far as features go, there’s no shortage. For just $18,895 plus $1,695 for freight and pre-delivery prep, the 500 Turbo includes all of the aforementioned items while standard access comes via remote keyless entry, the powered mirrors are heatable as well, the multifunction steering wheel offers tilt actuation, the power windows get one-touch down up front, the air conditioning is micron-filtered, and the six-speaker AM/FM/CD/MP3 audio system includes a media hub with a USB port and aux jack while the Blue&Me hands-free phone system includes Bluetooth streaming audio for more enjoyment on the road.

Options on my tester included the automatic I mentioned earlier at $1,495, as well as $675 for those Italian racing stripes, the red and black Katzkin leather upgrade for $1,050, and a $995 Beats Audio system that was superb. A $795 Comfort and Convenience package also made time spent with my tester much more enjoyable and a bit safer thanks to automatic climate control, heated front seats, satellite radio with a one-year subscription, and a security alarm, whereas the $1,200 powered glass sunroof visually opened up the already tall interior, and rear parking assist is never a bad idea and therefore well worth the $375 upgrade.

Additional items not included in the example I drove include a Black and Carbon version of my tester’s black and red leather upholstery for the same price, or alternatively regular leather in black or red for $850, plus a less expensive stereo upgrade by Alpine for $495, and all-weather floor mats at $195, while exterior upgrades include the same 16-inch alloys in Hyper Black for $300, a Canadian Maple Leaf stripe package for $235, and an Adventure package with a roof rack and trailer hitch for $650, while red exterior paint options include my tester’s White, along with Billet Silver, Granite Crystal (grey), Straight Black and Red, officially named Bianco, Billet Argento, Granito Lucente, Nero Puro, and Rosso; everything sounds so much better in Italian, doesn’t it?

It’s a safe bet that many Fiat buyers who might otherwise opt for an Abarth would choose the 500 Turbo if given the chance to spend time behind the wheel. It delivers on much of the Abarth’s styling and performance promise yet does the latter in a much more civilized way, with a quieter yet still exuberant exhaust note that won’t upset the neighbours at daybreak, plus it won’t buzzsaw incessantly through a sickly congested (or hung over) brain during the morning commute. At the same time the 500 Turbo offers a sportier experience than the already fun-loving regular 500, for a price that’s hard to beat. It plays the middle ground in a Fiat 500 world that doesn’t know how to be boring, making it one of my favourite small cars.
©(Copyright Canadian Auto Press)
Car Shopping Tools