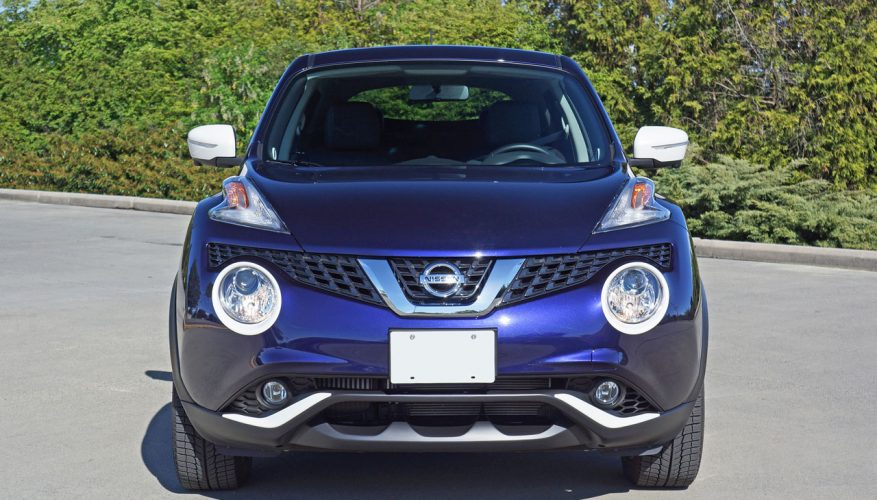 By: Trevor Hofmann
Cool, weird, wonderful, odd, bizarre, brilliant, fun, fugly… call the Juke whatever you want, but one thing’s for sure, it’s an innovator.

Five years ago when every other brand was focusing on the burgeoning compact crossover segment, Nissan was doubling its efforts with a subcompact crossover SUV, the success of which has since spurred on an entire class of economical CUVs. Now it’s jam-packed with competitors, four having only just arrived for a total of nine rivals strong.

That’s right. After the Juke, Mitsubishi came along with its comparatively conventional RVR, followed by the Chevrolet Trax (we won’t include its Buick Encore twin here as it sells into a pricier class) and then the Mini Cooper Countryman, while the newcomers include the Honda HR-V, Mazda CX-3, Jeep Renegade, and Fiat 500X. Despite all this new metal the Juke is holding its own, probably because nothing else is quite so extroverted. For 2015 it gets a very mild mid-cycle refresh that should help its many fans buy back into the perky soft-roader, something many will do despite the new challengers because few competitors deliver anywhere near its level of performance, especially when upgraded to AWD.

A total of 188 horsepower and 177 lb-ft of torque sent through a six-speed manual or performance-tuned CVT to torque-vectoring all-wheel drive is a lot of mechanical goodness in a sprite little CUV that weighs in at just 1,452 kilos (3,202 lbs) as tested. The 1.6-litre four gets direct injection, turbocharging, and variable valve timing to arrive at such lofty numbers, while my tester’s continuously variable transmission combined superb fuel economy rated at 8.8 L/100km in the city and on the 7.5 highway with pseudo shift increments and a manual mode that had me feeling like I was driving a regular torque-converted automatic.

The best part is how well it handles. Where all Jukes get an independent front strut suspension and stabilizer bars front and rear, AWD models swap out the base torsion beam rear setup for a sophisticated multi-link design that makes it wickedly fun when the road starts to wind. It’s one of few CUVs in its ultra-small class to provide such high-end and no-doubt costly underpinnings, most carrying cheaper twist beam designs right up into their topmost trims, so when a bump arrives mid-corner and the Juke AWD’s suspension doesn’t get unsettled and throw the standard 215/55R17 all-seasons off-line, you’ll appreciate that it was an investment well made.

The cost doesn’t translate all that much to its price, however. All of the mechanicals just mentioned start at $23,978, the price of a Juke SV AWD, which is $3,480 more than the base Juke SV FWD’s $20,495 window sticker. Along with AWD the upgrade also includes the aforementioned CVT, replacing the standard six-speed manual. My very well equipped Juke SL AWD is priced somewhat higher at $30,178, however, but it’s still a mid-grade Juke being that the Nismo line hovers above. The Nismo RS, incidentally, gives you all and more of the goodies just mentioned plus a specially tuned 215 horsepower engine with 210 lb-ft of torque (or a 211 horsepower version with 184 lb-ft of torque if opting for the CVT), but we’ll leave this little rascal for another review.

Along with the Juke’s unorthodox exterior styling comes an interior that makes almost as unique a statement, although zero soft touch surfaces are a sign of its time on the planet. This said nice woven cloth door panel inserts that mold into armrests are cushy and comfortable, while the floating hood above the motorcycle-style primary gauges and even more motorbike-like gas tank-style lower console design set the car apart, not just stylistically but artistically, from any challengers. As long as circles, ovoid shapes and other organic themes don’t throw you off, the rest of the Juke interior is fairly common. My SL upgrade meant that a powered sliding glass sunroof made the cabin feel more open, while the base model’s leather-wrapped steering wheel was joined by a leather-wrapped shift knob and leather upholstery with red stitching, the latter complemented with heatable front cushions, all combining for a bit of upscale decadence.

The gauges just mentioned are laid out in a simple two-dial design with bright red LCD temperature, fuel, odometer and shifter readouts in between, functional yet not as tricked out as some competitors’ full-colour TFT displays. Five years ago the Juke was far ahead when it came to its infotainment system too, but just like with the multi-information display ahead of the driver its newer rivals have more than caught up on their various centre stacks. Nevertheless my SL AWD tester replaced the base model’s 127-mm (5.0-inch) colour display radio system featuring NissanConnect with mobile apps, Bluetooth hands-free phone with text messaging, and rearview camera with a larger and more comprehensive 147-mm (5.8-inch) touchscreen with navigation, voice recognition, SiriusXM Traffic, and a premium-level Around View monitor with moving object detection, all fulfilling their duties as advertised, while the Rockford Fosgate ecoPUNCH audio upgrade with its eight-inch sub and amp delivered seriously rich bass tones and lots of bright, crisp high-end definition. It sounded best with my smartphone’s FLAC files streaming wirelessly via Bluetooth, but the SL also gets satellite radio while additionally grandfathering other features up from the base model such as AM/FM/CD/MP3/WMA capability, an aux jack and USB port, plus including features like RDS and speed-sensitive volume before making it all available with steering wheel controls.

At least as impressive, the SL’s graphically fun Integrated Control (I-CON) interface situated just below is a dual-function system that features two buttons for swapping between auto climate controls and drive functions, the former more form than mere function with the flashy excitement of a dance club light show just for changing the fan speed, but the latter allowing a pretty impressive amount of driver modulation, albeit done in a highly entertaining, graphically stimulating form-first way, part and parcel with the entire car.

Not to say the Juke is all form and no function. Its tall passenger compartment for five and utile cargo compartment, measuring 297 litres (10.5 cubic feet) behind the standard 60/40 split-folding rear seatbacks and 1,017 litres (35.9 cubic feet) when laid flat, makes it a good choice for those with outgoing lifestyles, while its raised ground clearance and AWD are ideal for all-season access to most anywhere, it’s just that form is its most noticeable attribute.

You might need to study old and new Jukes side by side to notice any differences with this update, but Nissan has incorporated an reworked grille filled with a larger more pronounced trademark chrome nosepiece, as well as reworked projector halogen headlamps, sportier rear bumper and valance designs, boomerang-style trim bits front and back, and a set of new high-intensity taillight innards with redesigned lenses that have long been influenced by the same aboriginal Aussie hunting weapon.

My particular example was made even more memorable thanks to purplish dark Cosmic Blue paint and unique Bright White highlights ringing the headlamps, slashed under my SL’s fog lights in said boomerang shape, coating the LED turn signal-infused mirror caps, stretching along the rocker panel moldings, spanning the width of the liftgate lip, and again garnishing the lower rear valance in the same boomerang shape that I’ve now mentioned ad nauseam, all part of the 2015 Juke’s new “Colour Studio” personalization program that offers 12 accessory trims in eight possible colour choices. It almost seems odd that Nissan didn’t finish this white accessories effect off with a set of white painted alloys instead of the more common looking and dare I say dated silver twinned five-spoke 17s, but that might have been too over-the-top even for a Juke. Then again, you can forgo white and choose bright orange accessories if over-the-top is your thing, wheels included.

Subtle makeover and all, the Juke’s highly unusual exterior design has held the test of time, an aberration to some yet as cute as a puppy to others. I fall into the latter camp, really liking its wonderfully nonconformist approach and all-out bravery, not only stylistically, but also in initiating the entire subcompact SUV segment. Sometimes radical endeavours don’t pay off so well, but the Juke is a true winner that can hold its quirky head high after five years of insolently flipping its digitus medius at the automotive establishment.