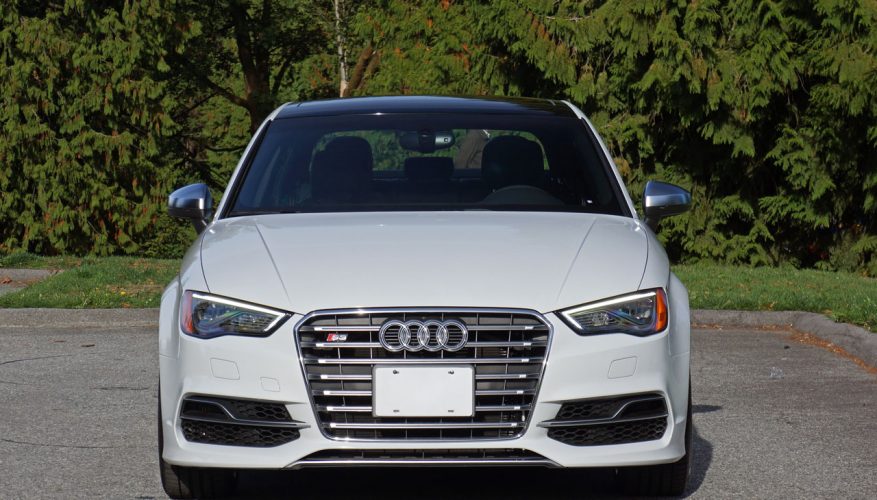 By: Trevor Hofmann
Every now and then an automaker creates a car that’s ideal for a given market, and sales success follows. Enter the new Audi A3 Sedan and its even more enticing S3 sibling.

Small, lightweight, superbly styled and filled with Audi’s usual high-quality finishings and ample allowance of features, the premium compact four-door suits Canadian tastes to a twin-scroll turbocharged T, and when kitted out with the extra power and handling prowess of the S variant it becomes the stuff of future legend.

I’m not going to go so far as to say the 2015 Audi S3 will someday be collectible, but there’s no doubt it will be highly sought after on the pre-owned market for decades to come as there are few compacts that deliver as much satisfaction behind the wheel, yet come in such a fully livable and accommodating package.

If you’re not yet familiar with the S3 Sedan or its A3 compatriot, think S4/A4, only smaller. Where the larger Audi models share Volkswagen group’s MLB platform architecture, along with the A5 and all of the quad-ringed brand’s bigger cars and crossovers, the S3 rides on the Volkswagen MQB platform that’s shared with the new TT, the multiple award-winning VW Golf Mk7 and the latest VW Tiguan, which is more advanced than Volkswagen’s A5 (PQ35) that currently underpins the VW Jetta, Beetle, Eos, and was previously the basis for the old Golf, A3 five-door and many other VW group products. Progress made is immediately noticeable in the latest A3/S3 Sedans, at least when behind the wheel and on the road.

From the design alone, the new A3 and S3 don’t appear all that different from any other Audi in the lineup. I’ve heard some complain that all Audis look alike, and from a distance I have to agree that it’s difficult to tell whether an A3, A4 or A6 is about to whiz past in the oncoming lane. I could understand why someone who just plunked down $60 large on an A6 might have issue with this, although it’s likely seen as a bonus for someone else who just stepped up to a $30k A3 from their Golf trade-in. Either way, Audi’s uniformly large singleframe grille and model-to-model similarity in headlight and front fascia styles show a continuity of design from the lowest ranks to the upper echelons of luxury culture, and the philosophy seems to be paying off.

Audi aficionados will think such talk is nonsense, that it’s obvious there’s a great deal of differentiation between the various models. Of course, being that yours truly and my photogenic sharpshooting partner capture them all via Sony NEX7 before I expound on their various design nuances ad nauseam, I can tell the difference, the S3 getting a unique aluminum-intensive grille, the lower slat of which bleeds off into a set of exclusive fog lamps, these sitting above an edgier lower valance incorporating an aluminum-look splitter, while redesigned headlamp lenses add glitter, the entire frontal design giving the little four-door more respect than most compacts can dare dream of.

The S3’s profile is upgraded with a stunning set of aluminum-look mirror housings, plus bulging side sill extensions and standard 18-inch alloys, although my tester wowed with a gorgeous set of machine-finish twinned five-spoke alloys with grey painted pockets on 235/35R19 Continental ContiSportContact performance rubber that wrapped around massive discs with optional red painted calipers imprinted with S3 emblems for added effect. The S3’s tail end gets the same beautifully shaped lighting elements as the A3, but the tiniest of rear spoilers lies across the base car’s artfully raised trunk lid, while a sportier rear diffuser gets aluminum-look trim plus four chromed tailpipes for an aggressive look and superb acoustical accompaniment at full throttle. No matter whether coming, going or standing still, the S3 looks sensational.

Inside it’s mostly A3 Sedan, which means that it offers a level of quality few rivals can compete with. Eye-catching S3-branded aluminum doorsill plates greet you upon opening the doors, followed by hard-to-miss aluminum pedals gleaming from below the instrument panel. As expected in the premium sector, the S3’s dash top, instrument panel, and door uppers to their halfway points are made from a high-quality soft-touch synthetic, while true to Audi’s much-lauded style and character there’s no shortage of nicely detailed aluminum trim. Over and above the exterior details and aluminum scuff plates just mentioned, the S3 sets itself apart from its less endowed brother with unique matte-brushed aluminum inlays, a fabulous flat-bottomed white-stitched leather-clad sport steering wheel with aluminum paddle shifters, the same white stitching adorning yet more attractive black leather sport seats with leg extenders, ditto for the shifter boot, while even the floor mats received the stylish white threading.

The driving position should be ideal for most body types, my medium-build five-foot-eight frame fitting snuggly between aggressively formed bolsters, perfectly shaped meaty steering wheel at hand, paddles easily within reach, grippy pedals placed for precise footwork, visibility superb no matter the outward angle, plus more than ample head, shoulder, hip and leg roominess for world rally emulators who like to position themselves close to the steering wheel with elbows out, or most anyone else.

Audi Drive Select gets a Dynamic sport mode that makes the most of every active function, intensifying the specially tuned turbocharged and direct-injected 2.0-litre four’s reactions, this engine making 72 horsepower and 22 lb-ft of torque more than the already enjoyable A3 2.0 TFSI Quattro, the S3’s final tally being 292 horsepower and 280 lb-ft of torque for a blast to 100km/h of just 4.9 seconds, a clean shave of 1.4 seconds off the top-tier A3’s sprint time. The S3 uses the same S Tronic dual-clutch automated gearbox as the A3, also fitted with six forward gears. Shifts are lightning quick and amply smooth unless pushing the envelope, at which point snappy, positive engagement lets you know a cog’s been swapped, if the rush of accompanying speed didn’t relate that fact already.

The S3’s sport suspension is especially satisfying. It’s a firmer more engaging bite into tarmac that borders on the surreal, although I’m fairly sure the upgraded 19s mentioned earlier had their effect on ultimate road holding, not to mention the unseen yet fully felt Audi Magnetic Ride upgrade. Mag ride makes day-to-day operation smoother and more comfortable while the car’s Dynamic mode leaves it just on the right side of rigid, remaining totally stable during acceleration, braking and cornering, and in my opinion well worth the reasonable $700 price of admission. The S3’s basic suspension geometry is comprised of MacPherson struts up front and four links at the rear, and so tuned it worked wonders on the circuitous roadways around my West Coast home. As did Quattro all-wheel drive, a truly legendary Audi attribute that makes the S3 an all-weather wunderkind of the highest order, and a car that I’d love to re-drive when our balmy weather goes into hibernation and winter’s whiteness arrives.

Audi adds all the expected electronic aids to these mechanical bits too, such as ABS-enhanced four-wheel discs along with electronic brake-force distribution and emergency brake assist, plus traction and stability control, pre-sense crash response and all the usual airbags, enough so to earn the A3/S3 the highest Top Safety Pick + rating from the US Insurance Institute for Highway Safety (IIHS), not to mention 5 Stars from the US National Highway Traffic Safety Administration (NHTSA).

I touched on the S3 interior’s style and build quality a moment ago, but didn’t expand on its key features. Rather than bore you with a list of obvious inclusions like auto on/off headlights, powered locks and windows (although it should be noted that all of Audi’s feature auto up/down), etcetera, I’ll mention some that stood out. Audi’s MMI infotainment system is a good place to start, its self-powered display rising from within the dash at ignition, the latter initiated by a console-mounted button that resides opposite from the audio system’s volume knob, both straddling the gear shift lever that sits ahead of a big rotating dial that controls said infotainment display. The standard AM/FM/CD audio system is plenty good, although a crystal clear Bang & Olufsen upgrade is available with top-line Technik trim that also gets proximity-sensing passive access, a full-colour multi-information system ahead of the driver, a backup camera, navigation, front and rear parking sonar, and Audi side assist, although my tester was done out in base Progressiv guise so none of these items were included, at least not standard.

For an S-branded Audi the S3 is a bargain, starting at $45,400 plus $2,095 for freight and pre-delivery prep, but my tester included a number of extras that pushed the price higher, such as a $1,950 Navigation package (that also includes MMI Touch), a $1,050 LED Lighting package (that includes adaptive cornering LED headlights and all-season lights), a $1,000 Convenience package (which includes proximity-sensing passive entry, front and rear parking sonar, and a rearview camera that really should be standard), $800 for the 19-inch wheel upgrade, $700 for aforementioned magnetic ride, $400 for those red brake calipers, and $800 for Glacier White Metallic paint, resulting in a final tally of $52,100 plus freight.