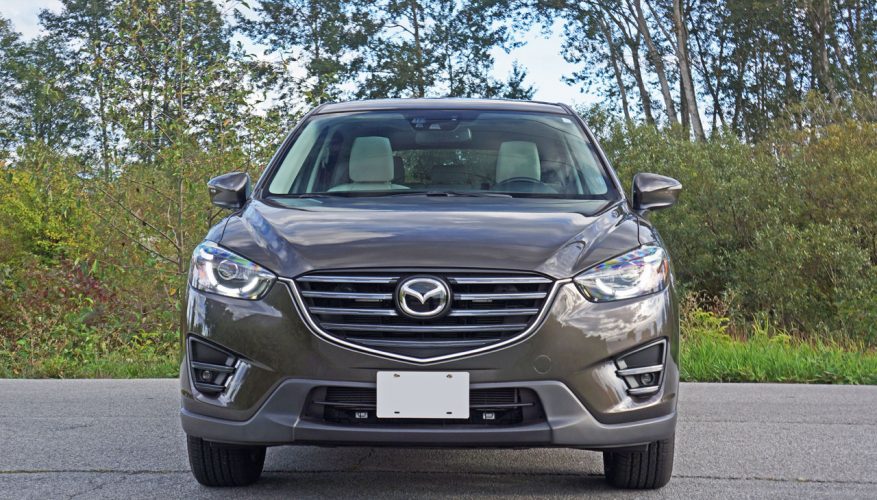 By: Trevor Hofmann
Mazda has updated its CX-5 compact crossover for 2016 and styling changes are subtle. Truly, most won’t even notice. The new grille gets five evenly spaced slats for a cleaner more uniform design than the outgoing model’s thick black slab up top and honeycomb mesh insert below, while GS and GT models get restyled fog lamp surrounds featuring two horizontal strakes. The mid-grade GS uses the same fogs as last year, while this top-tier GT gets a totally new set of tiny LEDs, not to mention new LED headlamps with signature detailing as well as stylish LED taillights. The GT’s standard wheels are impressive too, machine-finished 19-inch alloys with what look to be body-colour painted pockets on 235/55R19 Toyo A23 all-seasons. A nice set of twin exhaust pipes poke through the CX-5’s sculpted matte black body cladding that, just like last year’s model, continues to wrap right around the SUV’s lower extremities for a rugged yet sporty look.

My tester’s Titanium Flash Mica (metallic brown) paint is new too, and worked ideally with its gorgeous Pure White leather upholstery, another upgrade for 2016, albeit one that costs nothing over the GT’s standard black hides. Yes, it’s obvious that we parents (those who normally buy into the compact SUV segment) should know better than to get a family hauler with white leather seats, but sometimes we still want to play the role of urban sophisticate despite knowing full well that little Ethan and Emma will ravage the rear quarters with pizza sauce, gooey cheese and toppings, sub sandwich ingredients, juice box remnants, sticky dried ice cream and cone crumbles, soccer mud and the usual inexplicable kid grime (at least Mazda left the front seatbacks and carpets black). Then again I’m going to go out on the proverbial limb and guess that Mazda knows a thing or two about this model’s overall target demographic, this interior very likely aimed at younger childless urbanites as well as the burgeoning empty-nester market. Either way my partner and I love it.

The perforated creamy leather looks like a million, which when combined with the same slightly off-white for the GT’s padded leatherette door inserts, all the satin finished metal detailing throughout the cabin, soft-touch surfacing over the dash top and front door uppers, padded and stitched black leatherette around the infotainment display, the same upscale treatment beside the lower centre stack for protecting the driver’s and front passenger’s inside knees, plus overtop the armrests, not to mention around the impressive infotainment display filled with bright, clear and colourful high-resolution graphics leading to myriad functions, plus the metal-rimmed rotating dial controller for access, metal-trimmed HVAC interface, three-way heatable seats, high end Bose audio, dual USBs for multiple charging, and electronic emergency brake, it’s a premium compact CUV in search of a luxury badge.

But let’s celebrate that last point, because if it wore a fancy logo on its hood and backside it would sell for much more and be filled with fewer features, but as it is the CX-5 represents great value with a starting price of just $22,995 plus $1,895 for freight and pre-delivery prep, this top-line GT available from $34,895. As-tested Mazda asks $36,995, which while creeping up towards premium compact SUV pricing is equipped better than most German luxury utes upwards of $50k, this one featuring a $2,100 Technology package boasting auto high beam assist, adaptive cruise control, lane departure warning, forward obstruction warning, Smart City Brake Support and Smart Brake Support (new for 2016), the latter two using a near infra-red laser sensor to detect and react to a vehicle up to six metres ahead before applying the brakes automatically to avoid a potential accident. Equipped like this the new CX-5 achieved an IIHS Top Safety Pick + rating, the highest they give out.

It’s all premium level gear, the new electronic parking brake I just mentioned, which replaces the old handbrake, a significant sign that Mazda is embracing new refinements. I don’t have anything against handbrakes, actually favouring them in sports models, but this CX-5 is no MX-5 so there’s no need for a clunky throwback mechanical brake when lighter weight modern-tech ease of use is available, freeing up space on the lower console to boot. Hill hold assist makes up for any control issues, so there’s really nothing to miss.

The base GX model can be had with a Convenience package that includes the seven-inch touchscreen display I noted before, this system utilizing the user-friendly Mazda Connect infotainment system via HMI commander controller on the lower console instead of controls down each side of the dash-mounted interface as before, while it incorporates HD radio, Bluetooth with Audio Profile and SMS text messaging capability, all items pulled up to the GT.

The base CX-5 GX gets Mazda’s Skyactiv-g direct-injection 2.0-litre four-cylinder with 155 horsepower and 150 lb-ft of torque, but both GS and GT models get a standard upgrade to the Skyactiv-g direct-injection 2.5-litre four with 184 horsepower and 185 lb-ft of torque mated to a six-speed Skyactiv-Drive automatic with manual mode and Drive Selection plus standard AWD with the GT, which gives spirited acceleration that’s better by numbers than most of its key competitors, but by no means class-leading.

Drive Selection includes a Sport mode that improves response, though once again the CX-5 is more about sporty than all-out sport. Its more notable for being efficient, all the Skyactiv advancements focused on fuel economy and environmental gains without the pain of performance losses normally associated with doing the right thing. For instance, investment has been made to reduce the various Skyactiv engines’ internal friction, while incorporating dome-shaped pistons to raise compression, plus increasing low- and mid-range torque, while the standard Skyactiv-MT six-speed manual and aforementioned automatic also feature reductions in internal friction and other efficiency enhancements.

The result is a five-cycle EnerGuide fuel economy rating of 9.8 L/100km in the city and 7.9 on the highway for the GT, while the model’s most economical engine and drivetrain combination is good for a claimed 9.0 city and 6.8 highway, which makes it thriftier than most of the segment’s best sellers, but not all.

Most of the CX-5’s competitors benefit from fully independent double wishbone/multi-link rear suspensions, which is why I was a bit surprised to learn about this model’s rear torsion beam setup. Generally speaking there’s nothing at all wrong with a torsion beam suspension, with many sharp handling compacts utilizing it, but the general rule is that a more expensive multi-link system offers greater comfort while providing better accident avoidance and at-the-limit road holding, especially when encountering mid-corner bumps that can unsettle the rear end at high-speed and put it off-line. This said the CX-5 never had me feeling remotely out of control while its ride was thoroughly comfortable, so Mazda has obviously gone to great lengths to maximize performance while taking advantage of this type of suspension’s greatest asset, space utilization.

A twist beam suspension, as it’s otherwise called, can use shorter shock absorber towers positioned further to the outside of the vehicle, which can result in more cargo carrying capacity. To that end the CX-5 is quite good with 966 litres (34.1 cubic feet) of luggage space behind the rear seatbacks and a total of 1,835 litres (64.8 cu ft) when the base model’s 60/40 split rear seatbacks are laid flat. As mentioned, GS and GT models get an even more flexible 40/20/40 split second row, which also adds a tiny bit of volume to its load hauling total of 1,852 litres (65.4 cu ft). All said the CX-5 isn’t quite as commodious for cargo as the Ford Escape, Honda CR-V, Toyota RAV4 or some others, but it will be close enough for most families’ needs whereas its many other noted attributes certainly make it worthy of serious consideration.

High on this list of considerations are new unlimited-mileage basic and powertrain warranties, a big bonus to those who tend to max out their quota of kilometres before terms come to an end (normally 36,000 km in the first three years of comprehensive coverage and 100,000 km over five years of powertrain coverage), so you can now drive your CX-5 to the ends of the earth and back without worrying about running out of warranty (although if you plan to lease you may want to clarify any mileage limitations before scheduling a road trip to Yaviza, Panama).

I’m willing to bet that would be a highly enjoyable adventure at the wheel of a CX-5 GT, at least from a vehicular point of view. It’s a wonderfully comfortable CUV that’s filled with premium features, combines decent performance with good fuel economy, and its new styling updates add to its classy look inside and out.
©(Copyright Canadian Auto Press)
Car Shopping Tools