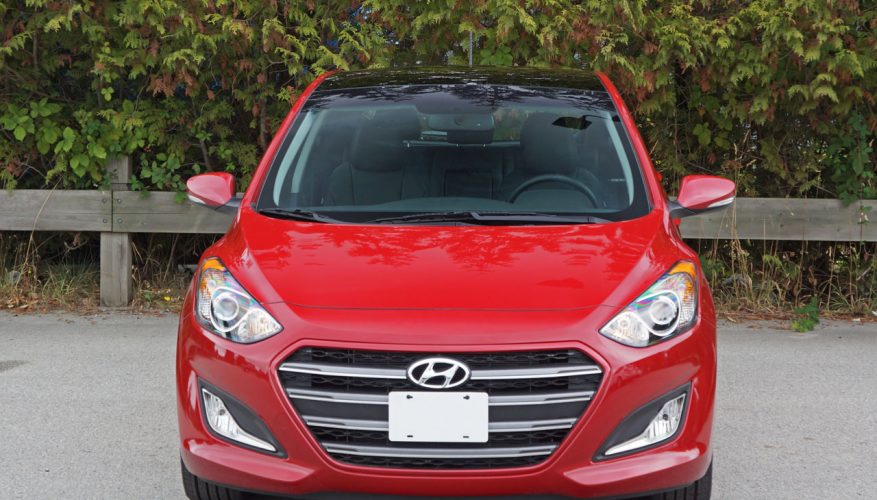 By: Trevor Hofmann
How do you like it? This is the refreshed 2016 Elantra GT, a car that’s only been with us for three years yet has found a passionate following. It arrived on the scene in 2012 as a 2013 model, replacing the more wagon-like Elantra Touring that had a good five-year run paving the way for this arguably more fashionable five-door. Where the Touring arrived on our shores with carryover styling from the European-designed i3 when our current four-door Elantra had already been available since 2011, this time around Hyundai has given its sportier model a mid-cycle update first.

The new grille design transforms the look of the GT, tying it more succinctly to the rest of the Hyundai lineup that now offers a similarly styled hexagonal grille. At first glance it looks like an all-new design with four evenly spaced horizontal slats replacing the outgoing model’s curved upper and lower ribs and bisecting bumper cap, but other than this not much has really changed. The bumper cap is still there, albeit now hidden by two of those horizontal slats, while the overall grille surround is identically shaped and sized with only the edging, previously black, now done out in body-colour. The standard projector headlamps, optional shark’s tooth fogs, and even the lower valance appear identical from last year to this year, and while the new grille insert looks different I’m undecided as to which looks better. I liked the old one a lot and I also like this one, and with change being needed I think they did a pretty good job maintaining a sporty character while infusing more current Hyundai DNA.

Top trims still feature turn signals integrated within their mirror housings, not to mention a gloss black rooftop that comes courtesy of a large panoramic sunroof, a bit more noticeable next to my tester’s Geranium Red painted panels than it would be with Coffee Bean brown or Space Black, while what initially appeared to be identical taillight lenses are now actually incorporating the curving lines of LED elements in the GT’s new top-line trim level.

Serious Hyundai fans will note this particular GT’s twinned five-spoke 17-inch alloys are new too, and while this is true they’re just part of a bigger trim level shakeup that sees some reshuffled, others eliminated and new ones created. These 17s along with the LED taillights come as part of the new Limited trim, last year’s top-line model dubbed SE Tech Auto. The SE designation is now gone, while L Manual, GL Manual and GL Auto continue to be the three least expensive entries, and a new GLS Manual joins last year’s GLS Auto for those who want more goodies along with a sportier driving experience. Just why new GLS Tech trim and this Limited model don’t come with a manual is anyone’s guess, but I’m sure Hyundai can support its decision with low projected sales numbers that don’t justify the expense of stocking them.

If I were in Hyundai’s leadership, mind you, I’d want to celebrate the overall goodness of the Elantra’s six-speed manual by giving it a more prominent role, the trickledown effect of which could elevate the entire lineup with a sportier halo. As it is the DIY gearbox is only available with the lesser of the GT’s trims, but the 16-valve, DOHC, 2.0-litre four-cylinder it’s mated to certainly moves the car along quickly with the optional six-speed automatic. Thanks to dual continuously variable valve timing and direct-injection the engine makes a strong 173 horsepower and 154 lb-ft of torque, while manual shift mode does a good job of maximizing engine performance and giving greater control to the driver. The manual’s unavailability in higher trims in mind, I was a bit surprised not to find paddle shifters attached to my Limited tester’s steering wheel spokes, a feature that would certainly motivate performance enthusiasts to spend more for this model or the GLS Tech, and it’s not as if Hyundai doesn’t have a set or two in its vast global parts bin that it could retrofit to the Elantra GT.

The automatic’s gearshift lever in the Limited is a nice bit of kit though, with a beautifully finished leather grip enhanced by aluminum-look trim and a glossy black cap, not to mention an upscale looking stitched leather skirt and a gloss black and brushed metallic surround, the entire design looking upscale while the shifter itself felt like a quality piece of equipment, nice to the touch and enjoyable to row through the cogs. It held its chosen gear through the corners unless the engine revs went too high, at which point it shifts automatically to avoid unnecessary abuse, giving a level of control that might not be as rewarding as a manual but is nevertheless a good compromise for those of us who need to commute in the real world, while the Elantra’s MacPherson strut front and torsion beam rear suspension performed quite well through the corners, an experience that was no doubt enhanced by those aforementioned 17-inch rims and more so the 215/45R17 all-season rubber wrapped around them, not to mention a 2,650-mm (104.3-inch) wheelbase that’s shorter than the sedan’s by 50 mm (2.0 inches). Despite the shorter wheelbase it feels just as solid and planted at highway speeds as the sedan, although I must admit the Elantra GT is most at home in the city where it provides great point and shoot performance along with excellent ride quality.

Enhancing the drive experience is the Elantra GT’s standard Driver Selectable Steering Mode (DSSM) with Comfort, Normal and Sport settings, which as the name suggests either makes steering feel and response less direct or more so, the former useful on the highway where less input is needed and the latter helping make it feel sportier through the corners. In reality I had absolutely no need for Comfort mode as my driving style leans to a more Teutonic setup most of the time (read: firmer), but the Sport setup helped give the GT a little more edge and that’s always appreciated in a sporty model.

As long as you’re not pushing it for all its worth the Elantra GT provides decent fuel economy at a claimed five-cycle EnerGuide rating of 9.8 L/100km city, 7.1 highway and 8.6 combined with the manual or 9.8, 7.2 and 8.6 with the automatic. You can probably use some hypermiling techniques like short shifting via the manual or the automatic’s manual mode to eke out even better results, but most people should be ok shifting the manual normally and leaving the automatic to its own devices while they’ll also appreciate the GT’s requirement for cheaper regular unleaded.

Let’s not forget that the Elantra sedan and this GT have remained a top-selling duo because they satisfy the needs of their extremely loyal fans by delivering the attractive styling noted earlier and strong performance just mentioned, roomy interiors, impressive menus of standard and optional features, a longer than average basic warranty, and overall good value.

The warranty is covered in a single sentence so I’ll get it out of the way now: five years or 100,000 kilometers of mostly bumper-to-bumper coverage; the “mostly” referring to items that receive their own separate warranties like batteries and tires. Speaking of the latter, the base Elantra GT L Manual gets a set of 205/55R16 all-seasons on steel wheels, this model a good choice for those who want to dress their car up with aftermarket rims, while the standard features list also includes projector headlamps, a rooftop spoiler, power locks and windows, powered heatable side mirrors, tilt and telescopic steering, premium cloth upholstery, driver’s seat height adjustment, air conditioning, a six-speaker 172-watt AM/FM/CD/MP3 audio system with aux, USB and iPod connectivity, a trip computer, four-wheel disc brakes with ABS, electronic brake-force distribution, and emergency brake assist, plus traction control, electronic stability control, vehicle stability management, active front headrests, front seatbelt pretensioners and all the usual airbags including a blocker for the driver’s knees.

All of these features are incorporated into an extremely welcoming cabin with a gorgeous stitched leatherette shroud shading the primary instruments, a premium-quality soft-touch synthetic dash top as well as the same pliable plastic used for the door uppers front and back, plus nice padded leatherette door inserts and armrests, while the leather covered seats get contrast stitching and perforated inserts for a sporty look, good breathability and excellent overall comfort. Attractive glossy black and brushed aluminum-like trim brighten an interior that’s already airy and spacious thanks to that panoramic sunroof I noted earlier and larger than the average compact’s dimensions, while some of this segment’s nicer looking primary gauges, that are also large and highly legible no matter the outside light due to good backlighting and effective shielding, are joined by a useful if not slightly remedial multifunction display.

The infotainment system is particularly good, however, with bright, clear graphics and rich colours, plus a depth of utile functionality from the aforementioned navigation system, which worked flawlessly, to getting the best sound out of the audio system, setting up your Bluetooth connected phone or modulating vehicle settings. The rearview camera provided superb rearward visibility too, with a nice large, clear picture that made backing much safer. It’s all controllable via two rows of buttons that run down the sides of the display as well as the touchscreen itself, while an interface just below services go-to audio controls as well as the auto HVAC system, complete with a large LCD display that gives a good readout of front driver and passenger temperatures, fan speed and the direction of ventilation. Two-way seat heater buttons are also included, and all of the switchgear on this panel as well as throughout the rest of the interior is very well made from high-quality plastics that fit together nicely with good damping.

I mentioned that the Elantra GT is larger inside than most competitors and that’s true up front, for rear seat passengers, and under the hatch where 651 litres (23.0 cubic feet) of cargo space resides behind the rear seats and up to 1,444 litres (51.0 cubic feet) is available when the standard 60/40 split-folding rear seatbacks are laid flat. As mentioned there’s an optional storage tray under the cargo floor and while useful for small valuables or tools, it’s a shallow compartment with very limited applications.

While my tester was fully equipped I need to make mention of the base Elantra GT’s asking price of only $18,449, which is exactly the same manufacturer suggested retail price as last year’s version despite the new styling. Even more interesting is that both of these window stickers are $600 more affordable than the 2013 Elantra GT, and that’s after factoring in a steady increase in freight and pre-delivery prep fees since the Elantra GT went on sale, which went up from the 2013 model’s $1,495 to $1,595 in 2014 and $1,695 this year.

It’s hard to complain when Hyundai keeps the price so low, especially while talking about a car that delivers on so many levels. On top of its great styling, strong performance and impressive features, last year’s very similar GT boasted an IIHS Best Pick award while the NHTSA gave this 2016 model a best possible 5-star safety rating. What’s more, J.D. Power and Associates has the Elantra tied for second with the Toyota Corolla in its latest 2015 Initial Quality Study (IQS), while the Hyundai brand ranked fourth best out of 33 total auto brands available in North America.

There was already a lot to like about the Elantra GT before its update, but now with a new grille design and some new and revised trim levels it’s even more appealing.
©(Copyright Canadian Auto Press)
Car Shopping Tools