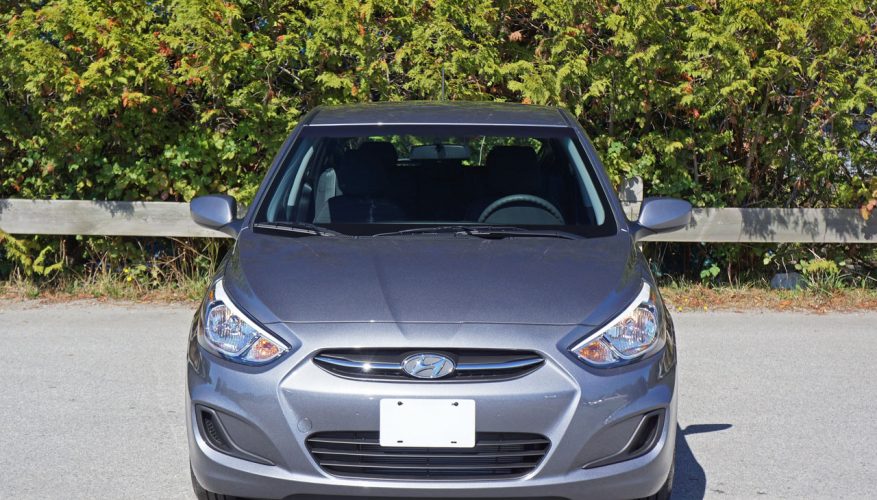 By: Trevor Hofmann
Now in the fifth model year of its fourth generation, the 2016 Accent is deep within its product cycle with Hyundai planning a replacement sometime during the next calendar year. That’s a good, healthy run for any car, yet sales of the subcompact model are hardly slowing.

Last year the Accent found 23,173 Canadian buyers for both its four-door sedan and hatchback body style, and despite its aging design 2014 was one of only six 12-month periods that saw the model spike over the 20k threshold since well before I first reviewed one in the fall of 2002. The Accent actually dates back to model year 1995, it being the replacement for the much-maligned Excel that was successor to the original Pony, the compact hatchback that started Hyundai off in our country back in 1984. That very year I was selling “competitive” Renault 5s and Alliances across the street from one of the first Hyundai stores to open in my area, and I quickly experienced my leads walk across the road and vanish, never to be seen or heard from again. What soon happened with respect to Renault’s North American history is well known, the brand disappearing from Canada and the US soon after I left them for better opportunities myself, while Hyundai’s popularity and credibility have grown to rival the biggest names in the global auto industry.

The Accent is an excellent example of doing things right, as even in this iteration’s waning years it remains highly competitive thanks to sportier than average styling (especially in hatchback form), an ultra-roomy interior (ditto re the hatch), loads of standard and optional features, superb performance, a much better than average warranty, and as always with Hyundai products, excellent value.

From a styling perspective there’s nothing that differentiates the base L model from the mid-grade GL Auto I’m reviewing, the pricier SE and GLS models getting fog lamps, 16-inch alloy wheels and a glass sunroof, while the GLS sports projection headlamps with LED accents and turn signals integrated into the mirror housings. Such upgrades aside, all Accent hatchbacks wear Hyundai’s older hexagonal grille, which is more of a creased six-sided outline with a narrow opening up top and larger engine vent below, bisected by a body-colour bumper cap in between, while my tester gets a set of faux brake ducts fitted to each corner where fog lamps otherwise go on the aforementioned higher trims, a creative addition that actually looks pretty sporty.

Even the base headlights that don’t get the upgrades I mentioned a moment ago are wonderfully detailed and only dwarfed in size by the car’s scythe-shaped vertical taillights, the latter finishing off an edgy rear end design that also gets a standard rooftop spoiler and rear fogs.

The overarching Accent Hatchback shape is much more interesting than most others in this segment, with a go-fast profile featuring a near vertical backside. The base 14-inch steel wheels and covers are shod with 175/70R14s, ideal for comfort while providing decent road-holding, although most Hyundai dealers have reams of rims to upgrade the look while still keeping you on budget.

My tester was done out in Triathlon Grey, which is a nice medium grey metallic that really works well with the design, and while a number of alternative shades and colours are available for more conservative buyers, such as Ironman Silver, Century White, Ultra Black, Coffee Bean (brown) and Pacific Blue, Hyundai offers up a couple of seriously flashy colours to make your Accent hatch stand out from the crowd, including Boston Red and Vitamin C (orange).

The interior is black no matter your exterior colour choice, and while this cabin has been around the block a few times along with the rest of the car it still looks plenty fresh. The dash and door uppers aren’t soft to the touch, of course, but the textured matte composite material Hyundai uses appears quite upscale and offers a nice higher quality feel than the same surfaces on most competitive subcompacts.

The fit and finish of all the switchgear is excellent too, from the standard AM/FM/CD/MP3 display audio system interface with aux, USB and iPod connectivity, plus the power lock switches and sliding sunvisors from the base L model, to the LE Auto’s upgraded air conditioning controls and this GL’s powered heatable side mirror controller, powered window toggles, and multifunction switchgear on the tilt and telescopic steering wheel that affects audio, cruise, voice activation and Bluetooth hands-free phone controls, it’s all a cut above. My tester’s fabric upholstery was great looking too, its bolsters in black and inserts enhanced with a stylish wavy blue thread pattern, while an overhead console with a sunglasses holder is always a bonus in my books and the covered vanity mirrors are critically important for my much better looking partner.

The GL, which starts at $16,449 plus $1,595 for freight and pre-delivery prep, just $2,650 more than the $13,799 base hatch, also gets keyless entry, heatable side mirrors, two-way heatable front seats, an additional set of tweeters for a total of six speakers plus satellite radio for the audio system, and 60/40 split-folding rear seatbacks to make the car’s seating/cargo configuration a lot more flexible.

As mentioned earlier you can spend more for more equipment, $17,699 precisely for the GL Auto I tested, $18,699 for the Sedan SE that adds the exterior lighting upgrades, alloys and sunroof I noted before, or $18,499 for the GLS Manual and $19,749 for the GLS Auto, both of which up the ante with more lighting improvements including automatic on/off headlamps, plus a leather-wrapped steering wheel and automatic climate control, an Accent at this level including a little bit of extra luxury in a segment that certainly can use more options.

In case you hadn’t noticed the “Auto” in the trim designation, Hyundai’s six-speed automatic isn’t the usual fuel-economy at all costs gearbox. Along with the extra forward cog that allows it to eke out more mileage from trips down the highway than some competitors that only offer four- and five-speed automatics, those who like to have a little extra fun will enjoy its gear lever actuated manual shift mode, letting you hold a given gear through corners and downshift for more control while setting up a turn or braking. The way I’m going on you might think I’m talking about a Genesis Coupe, and while the Accent doesn’t hold its line as tightly as Hyundai’s very talented two-door 2+2 it’s plenty fun to fling through curves or haul around an autocross course, the little tot boasting one of the most powerful engines in its segment, a 16-valve, DOHC 1.6-litre four-cylinder with direct-injection and dual continuously variable valve timing that’s capable of 138 horsepower and 123 lb-ft of torque, numbers that make most rivals appear like they’re only about fuel economy.

If the Accent didn’t match some of the stingiest fuel misers in the class those subcompact opponents might have a point for going cheap on power, but its 8.7 L/100km city, 6.3 highway and 7.6 combined five-cycle EnerGuide rating with the manual, or 8.9, 6.3 and 7.7 numbers with the as-tested automatic show that this sporty Korean isn’t all muscle and no brains. Incidentally, sequential manual mode is also good for saving fuel, letting you short shift to keep revs low, which might even help you get more out of a tank of fuel than its claimed rating.

As is usually the case in this small car segment the Accent rides on MacPherson struts up front and a torsion beam setup in back for a good compromise between a comfortable ride and decent handling, not to mention a lower load floor for better cargo room (I’ll get back to that in a moment), while power steering duties come from a motor driven rack and pinion design that responds well and feels pretty good for the class. While all this is par for the course, Hyundai is a leader when it comes to all-important braking.

If you were able to see behind those steel wheels and covers a very unusual set of rear disc brakes would peer through, most competitors only offering rear drums in this class while only some include rear rotors on top-line trims. The Accent’s standard four-wheel discs also feature ABS and electronic brake-force distribution, while the stock safety suite also includes traction control, electronic stability control and vehicle stability management, as well as active front headrests, front seatbelt pretensioners, and dual front, front side-thorax, and front/rear side-curtain airbags.

While all of these attributes are impressive, and reason enough for the Accent’s continued sales success, a key reason for the hatchback’s popularity is interior spaciousness. Few will find the front seating area too small, while those in the rear will appreciate better than average head, shoulder, hip and legroom, but the Accent hatch’s biggest selling point might be its cargo capacity, a full 600 litres (21.2 cubic feet) of gear hauling volume behind its rear seats and an impressive 1,345 litres (47.5 cubic feet) when they’re laid (mostly) flat, making it perfect for people that have a lot going on in their lives.

One very good thing about buying a car that’s been around for a while is a better chance for all the bugs to have been ironed out. Case in point, the Accent was the highest ranked small car in the latest 2015 J.D. Power and Associates Initial Quality Study (IQS), while the Hyundai brand ranked fourth best out of 33 total auto brands available in North America. If that’s not enough to placate any brand switching anxiety, Hyundai’s better than average five-year or 100,000 km basic and powertrain warranty should do the trick-price out the extra two years of basic coverage needed from an aftermarket warranty supplier if you go for most of the Accent’s competitors and you’ll see the value in this feature alone.

Yes, the Accent proves there are some very good benefits that come with aging, so whether you’re now entering adulthood and purchasing your first new car, hovering around 30-something with a new family and requirement for a little extra room from your ride, or doing your best to enjoy your retirement on a fixed income, Hyundai has a car that delivers good style, plenty of features, great performance, excellent fuel economy, superb reliability and an awesome warranty. Consider the Accent very seriously.
©(Copyright Canadian Auto Press)
Car Shopping Tools