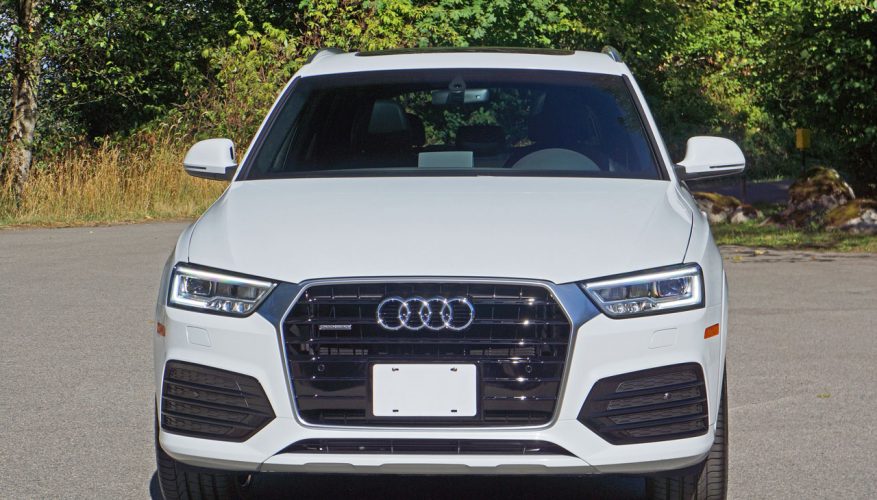 By: Trevor Hofmann
Europeans have been enjoying small luxury for decades, but the concept is relatively new for we North Americans. Our mindset has traditionally been “big is better,” and while this is still reality for the most part, Audi’s own full-size A8 luxury sedan still outclassing and certainly out-pricing the diminutive A3 four-door, there’s a shift to small occurring in the premium sector that’s likely here to stay.

The Q3 is a prime example. Prior to its arrival here last year, Audi’s only “compact” SUV model was the Q5. The larger crossover SUV was and still is classified as a compact as there’s no segment between compact and mid-size, the latter served by Audi’s seven-passenger Q7, but the Q3 more ideally falls into what we normally refer to the subcompact category along with the BMW X1, Buick Encore, Mercedes-Benz GLA, Mini Cooper Countryman and Range Rover Evoque (Mazda’s new CX-3 deserves to be considered in this premium segment too as it’s extremely good and packed with luxury), plus the upcoming Infiniti QX30, the long-expected Acura model based on the new Honda HR-V, and no doubt others following quickly.

The Q3 wasn’t first in this segment, but it helped pave the way. While only here for a year it’s been available in Europe and China since 2011 and has since enjoyed impressive global sales nearing half a million units. Knowing that a refreshed version was on the way for this 2016 model year it might have made sense for Audi’s North American operations to hold back on the old 2015 model’s debut, but now that the new one is here I understand why they pushed forward with their plans. First off they would have missed out on 1,566 Canadian and 3,654 American customers last year alone, many of which were new to the four-ringed brand and instead may have purchased from a competitor, while the Q3 sold an additional 1,948 and 7,413 Canadian and US units respectively during the first seven months of 2015. Secondly, while the new 2016 model’s front end looks entirely new the rest of the refreshed Q3 is mostly carryover and therefore easier and less costly for regulatory compliance.

The big change comes to the Q3’s big bold singleframe grille, the equiangular hexagonal shape appearing broader due to longer upper sides and shorter more vertical lower sides resulting in a wider lower section, plus last year’s simple chromed edging is now replaced with satin-silver trim that seems thinner on top and bottom yet much thicker where new extensions lead off from its four upper vertices to butt up against slightly revised headlamps. A new aluminum hood overtop plus reworked faux corner brake vents and a nominally modified lower valance combination below help to transform the Q3’s look, and I must admit that its front end appears completely new.

Despite Audi updating the side sills the Q3 is still more cute than sexy from profile, but at least it’s not pudgy like the VW Tiguan it shares underpinnings with. The rear D-pillar is too radically raked for that, and my tester’s fabulous five-spoke alloys could only be from Audi, although they’re so big and Pirelli P Zero 255/35R20s so meaty they make the brake rotors look a tad small. A vast array of alloys are available for the little ute, the base model getting twinned five-spoke 18s on 235/50R18 all-seasons, whereas my Technik S Line-trimmed version would’ve been kitted out with 10-spoke 19s if it weren’t for the upgraded 20s.

Likewise the new Q3’s reworked blade shaped taillights finish off its attractive rear quarters nicely, a subtle rooftop spoiler above, new aluminum liftgate in between and racy looking diffuser-style bumper below pulling things neatly together, while dual chrome tipped exhaust pipes appeared as if this little family hauler had something truly saucy hidden under the skin.

As it is the Q3 makes due with the same peppy and efficient direct-injected and turbocharged 2.0-litre TFSI four-cylinder as used by the aforementioned VeeDub, good for an identical 200 horsepower and 207 lb-ft of torque and ample for a vehicle that weighs 1,585 kilos (3,494 lbs) in its slightest front-drive form and 1,670 kg (3,682 lbs) when equipped with Quattro all-wheel drive. Its six-speed Tiptronic automatic might not be as mathematically advanced as the Evoque’s nine-speed autobox, the all-new X1’s eight-speed transmission, or the seven-speed dual-clutch unit in the GLA, and its nowhere near as fun as the Countryman’s six-speed manual, but there are paddle shifters at the steering wheel when the Sport package is added to topmost Technik trim and there’s something to be said for tried and tested technology (that poke meant for LR’s problematic nine-speed gearbox). The Q3 certainly gets up and goes well enough, my notes reading, “the engine really takes off” (I’m not at my most creative when scribbling afterthoughts), but in hindsight its 8.2- (FWD) and 8.6-second (AWD) sprints to 100km/h are no match for most rivals.

To make the most of any situation my Sport package equipped Q3 Technik came with a Drive Select button on its centre stack, which when pressed allowed selection of three modes that modulate throttle response, transmission response and shift points, plus steering feel, all displayed on the infotainment screen. Default is Auto, which worked ideally for everyday driving, whereas Dynamic (sport) mode really made a difference to overall feel and seat of the pants results when trying to maximize performance. Alternatively, Comfort does an excellent job of smoothing out untoward road surfaces, whether tackling wilderness trails or taking on the really rough stuff in town.

On that note the Q3’s ride is superb and its handling fabulous fun thanks to a MacPherson strut front suspension and four-link rear setup, while its speed-sensitive electromechanical power steering reacted to input quickly and gave reasonably good feedback along the way. Those aforementioned four-wheel discs might look smallish behind my tester’s larger than life rims but they scrubbed off speed easily enough and didn’t get all mushy after repeated stomps.

The Quattro upgrade certainly helps handling, especially in the wet, but if you’re not likely to push the performance envelope the Q3’s front-drive setup should be more than adequate and the car’s standard traction and stability control systems easily enough to manage most winter conditions. Along with these the brakes are equipped with ABS, electronic brake-force distribution and brake assist and standard tire pressure monitoring makes sure all the rubber meets the road when needed, while the usual assortment of airbags take care of emergencies.

So far I’ve spoken about changes made to the 2016 Q3’s exterior styling, but haven’t yet made mention of the interior. If you’re already familiar with the 2015 Q3 you’ll be hard pressed to notice any changes to the 2016’s cabin, with almost everything carrying over to this updated model. Then again, apply fingers to the four buttons surrounding the MMI infotainment system’s centre-mounted rotating dial and you’ll likely notice the new Alu-optic soft keys. The finely finished aluminum quartet feels extremely nice to the touch and works as advertised, a nice improvement to an ideal interface for inputting commands to the freestanding tablet-style base 6.5-inch display atop the dash.

Last but not least, Audi has added a new cargo cover to the luggage compartment, the latter of which is sizable at 473 litres (16.7 cubic feet) with its 60/40 split-folding rear seatbacks upright or 1,365 litres (48.2 cubic feet) when they’re folded forward. A standard pass-through allows you to take longer items like skis along for the ride when the two outboard seats are in use, making the Q3 especially versatile.

Back to that final 2016 upgrade, I’ll leave it up to you to decide if its new soft retractable cover is better than the outgoing model’s carpeted hard shelf-style cover, the new one more convenient for quickly loading taller items or covering smaller stuff up in a snap, plus easier to hide out of the way in front of rear seats when removed, while the older one was ultra-rugged and capable of holding a load atop all on its own, but I’m sure Audi wouldn’t change something like a tonneau for the sake of change. Either way the Q3’s cargo compartment is one of the best finished in its class, a nice treat in a small SUV segment that sometimes forgets it’s supposed to be pampering its premium crowd from front to back.

Pampering is right, with a full soft synthetic dash-top that continues halfway down the upper instrument panel, albeit the lower portion of the IP is surfaced in a hard and somewhat hollow matte plastic that at least looks good. The door panels are made from premium pliable surfaces from top to bottom, however, unusual for the class yet welcome just the same, while padded leatherette inserts sit atop padded rubberized armrests. The entire lower console is hard plastic, other than the same aluminum surfacing used for the dash and door inlays, par for the course in this small SUV segment, although the Q3’s switchgear fits together more tightly and is better damped than the majority of its competitors and even some higher priced Audis, but alas the buttons feel unsuitably hollow when compared to others in the segment and the HVAC dials might fit together perfectly but they’re once again not made from the priciest of plastics.

As mentioned my tester came in $40,700 Technik trim and therefore included everything I’ve already mentioned as standard, excepting the navigation upgrade that was thankfully added on. Other Technik upgrades include LED headlights, dynamic taillight indicators, S Line styling upgrades, S Line doorsills, power-foldable side mirrors, a backup camera (this should really be standard like it is in the US), an upgraded 14-speaker Bose audio system that sounded brilliant, and the Audi side assist warning system. Incidentally, Quattro all-wheel drive adds $2,500 to all trim levels.

As noted earlier my test model included the $1,850 Sport package too, which along with the wheel and tire upgrades included a flat-bottomed sport steering wheel with paddle shifters, brushed aluminum inlays, sport seats, and a black headliner. I’m kind of glad Audi didn’t tack on the $500 Black Optics package as I love the stock aluminum-look grille surround, window trim and roof rails, although to be fair I haven’t seen the “upgraded” high-gloss black grille surround, window trim and roof rails in the flesh and therefore will leave final judgment until later.

Speaking of judgments, the US Insurance Institute for Highway Safety (IIHS) has already awarded this latest Q3 a Top Safety Pick, receiving the highest possible “Good” rating for each test. See what I mean? You don’t have to go large to get good.

That’s the premise of the new Q3. While not measuring up to the Q5 and Q7 in size it comes close to measuring up in quality and feature sets while delivering more cutting-edge design (for the time being) and decimating both in fuel economy (if not performance). Either way the Q3 is a fun loving little luxury ute that’s priced to sell well. Expect to see a lot more on the road once word gets out.
©(Copyright Canadian Auto Press)
Car Shopping Tools