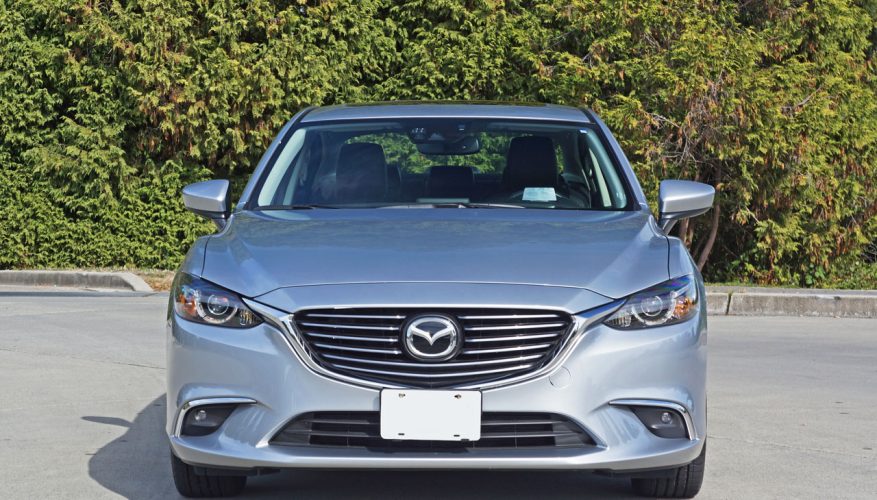 By: Trevor Hofmann
You could be forgiven for not noticing that the 2016 Mazda6 has been given a mid-cycle refresh, as updates to its exterior styling are quite subtle. In my opinion this is a good thing, however, as it’s already a fabulous looking mid-size sedan and any radical changes for the sake of change might have undermined the original design.

As it is, Mazda has only modified its grille slightly by replacing the thicker topmost horizontal rung with two thinner slats, resulting in six uniform ribs from top to bottom. These are chromed on as-tested top-line GT trim, while all models get a thicker version of Mazda’s trademark bright metal grille surround wrapping around its lower half before becoming even more pronounced as it blends into the newly redesigned headlamps, these incorporating full LED illumination in GT trim. Last but hardly least, GT models get stylish chromed eyelids overtop the fog lamps, which are upgraded to LEDs with the GT. While all of this is good, if you only caught a glimpse of its side profile or rear quarters while it drove past there’d be no clues as to its model year, or the dramatic changes made inside.

If you’ve ever slid behind the wheel of a modern-day Mazda6 you’ll be wowed by the 2016 model’s revisions. The first thing that catches the eye is the freestanding seven-inch tablet-style infotainment display perched atop the dash, which eliminates the previous system’s fully embedded layout. I like the look as it modernizes the interior, and while new to the 6 this system has already proven its worth in other Mazda models, as has the large metal-ringed rotating HMI Controller dial, the assortment of go-to buttons around its perimeter and the separate volume control knob, all situated within easy reach on the lower console. The new display makes it easier to view without taking eyes from the road, while its graphic interface is attractive and ultra-simple to operate. It gets very effective voice-activated navigation in GT trim, a feature pulled up from the GS model’s Luxury package, plus a reverse camera with guidelines adopted from the stock GS. The dual-zone automatic climate control system is grandfathered up from GS trim too, but the big news here is a completely redesigned HVAC interface that looks fabulous and works effectively.

If you noticed this without first seeing the gorgeous swath of stitched and padded leatherette crossing the instrument panel, I’d be concerned, as it’s a classy bit of luxury kit that goes even further to set the top-tier 6 apart from competitors in the class. The premium treatment finishes off the edges of the lower centre stack and lower console too, my tester’s done out in chocolate brown for added richness, while the door inserts and armrests get the same brown padded leatherette treatment.

Situated right in front of the driver’s sightlines is a head-up display unit that powers up out of the dash at startup, an item that will be familiar to Mazda3 GT and new CX-3 GT owners. As with these other models it can only be had in top-tier GT trim, and is really handy for speed limit reminders and other critical warnings, but I found it especially helpful when trying to find my way via the aforementioned navigation system, as the instructions along with large directional arrows were able to guide me along without causing the need to glance over to the infotainment screen.

Below the head-up display is a primary gauge package that appears identical to the outgoing model’s, which was entirely fine by me as its large backlit dials and effective shroud made for easy reading no matter the exterior lighting conditions. The steering wheel was more or less the same too, except for some metallic appliques, although to be clear the only other carryover instrument panel surfaces were the sliver of dash top just under the windshield, plus the lower dash and glove box lid ahead of the front passenger. As expected in this class the majority of that redesigned dash top as well as the carryover door uppers are made from a high quality synthetic that’s soft to the touch, the 6’s overall refinement good for its mainstream mid-size category and coming very close to some E-segment sedans in the premium class.

I couldn’t help but notice that the new Mazda6 was also quieter around town and on the highway, a feeling that turned to fact when research confirmed Mazda had reduced NVH levels by 25 percent at freeway speeds. As has long been the case, the big sedan is extremely comfortable in all situations, while handling is better than average in this class. Of course my GT tester’s 19-inch rims on 225/45R19 all-season rubber didn’t hurt matters, these replacing the standard 17-inch alloys on 225/55s, the larger wheels making the most of the 6’s fully independent MacPherson strut front and multi-link rear suspensions with stabilizer bars at both ends, while the speed-sensitive rack-and-pinion steering giving good feedback while plenty easy to use at low speeds.

If the 6 has a weakness it’s performance, its Skyactiv-branded DOHC, 16-valve, direct-injected 2.5-litre four-cylinder biased more towards fuel economy than all-out acceleration. The engine makes 184 horsepower and 185 lb-ft of torque, ample for everyday use and fully capable of getting you up to highway speeds and beyond in adequate fashion, but it’s not going to win any stoplight wars and certainly doesn’t do much to promote Mazda’s enviable go-fast image. The availability of a six-speed manual gearbox across its three trim levels is admirable, however, even the top-line GT sporting the DIY transmission, while its optional six-speed automatic features no-cost paddle-shifters and a drive selection switch boasting Sport mode for GS and GT models, the latter a $1,300 option with base GX trim.

Trims in mind, the entry-level GX, which starts at $24,695 plus $1,695 for freight and pre-delivery prep, gets some impressive standard features, rear outboard seat heaters being top of the list being that they’ve never been offered on a base mid-size model before. The aforementioned infotainment system is standard too, although while pre-wired for navigation its Mazda Connect functions are limited. Other impressive standard items include an electronic parking brake, new this year, plus pushbutton start, power windows with one-touch up/down all-round, six-speaker AM/FM/CD/MP3 audio with HD Radio, Bluetooth hands-free with Audio Profile, automatic volume control, two USB ports, an aux jack, a tilt and telescopic multifunction steering wheel, heatable front seats, height adjustment for the passenger’s seat, automatic on/off headlights, rain-sensing wipers, air conditioning, cruise control, handy sunglasses storage overhead, a decent sized 419-litre (14.8 cubic-foot) trunk that can be made larger via 60/40 split-folding rear seatbacks with trunk-mounted release levers, turn signals integrated into body-colour mirror housings, LED taillights, and much more.

As much as I appreciate a simple black perforated leather interior I would’ve loved to have tried out the Mazda6 with its new Pure White hides that I tested in a loaded 2016 CX-5 recently, these available with the GS Luxury package that also adds an eight-way powered driver’s seat with power lumbar support, navigation, and a moonroof. These were all standard with my $32,895 GT, which along with the revised front bumper garnish and grille (the latter of which comes complete with signature illumination), LED headlights with signature lighting, adaptive cornering capability and automatic leveling, plus LED fog lights and active head-up display I commented on earlier, features LED interior lighting, auto-dimming rearview and side mirrors, a universal remote, driver’s seat memory, six-way power for the passenger seat with powered height adjustment, plus a superb sounding 11-speaker Bose audio system boasting Centerpoint surround-sound and AudioPilot noise compensation.

So equipped the six-speed automatic gains a significant advantage over the non-i-ELOOP setup with a claimed 8.5 L/100km in the city and 5.9 on the highway compared to 8.8 city and 6.1 highway. The six-speed manual trades fuel-efficiency for fun with a five-cycle EnerGuide rating of 9.4 city and 6.4 highway. This said, all Mazda6 fuel economy ratings are excellent, a good reward for any performance penalties.

After a week behind the wheel I must admit to being mostly on side with Mazda’s new efficiency first philosophy, at least when it comes to this big four-door sedan. While there are times I miss the old Ford-sourced 272 horsepower 3.7-litre V6 with its tire spinning 269 lb-ft of torque, I have to transport my mind back to the days when fuel prices were well below a buck a litre in order to get a clearer picture of what that powertrain might be like to live with today. The current truth is that I also appreciate paying less for fuel, and in today’s market I know I’m not alone, let alone am I the only one concerned about the effects of my tailpipe emissions, which are much lower thanks to Mazda’s Skyactiv technologies.

Mazda is on the right track with its flagship 6. Along with its efficiency advancements, its styling is class leading while completely original, its new interior wonderfully modernized while one of the most refined in its segment, and its handling and braking dynamics amongst the most sporting, while the model’s modest sales make it a lot more exclusive than other mid-sizers. In my opinion the much-improved 2016 Mazda6 remains a clear winner and worthy of serious consideration.
©(Copyright Canadian Auto Press)
Car Shopping Tools