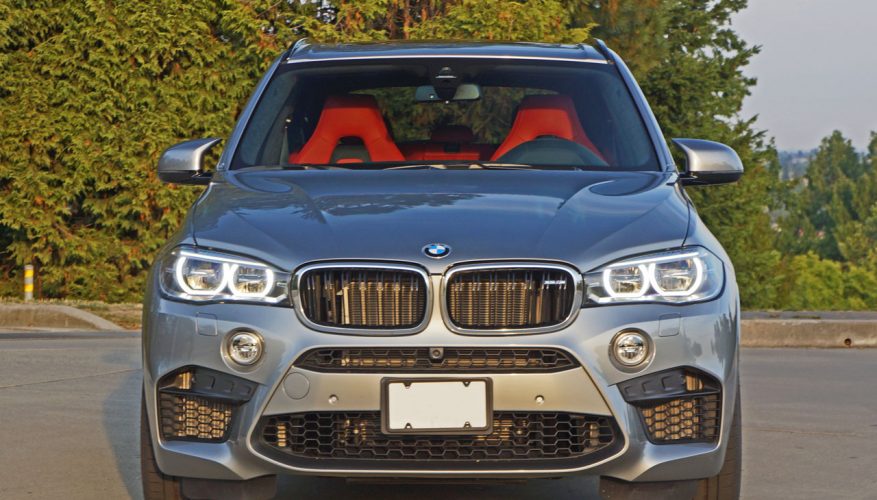 By: Trevor Hofmann
I certainly didn’t expect this. I became a diehard M fan at first sight of the original M1 in my dad’s Popular Mechanics magazine, which was long before my first stint at the wheel of a ’94 Euro-spec E36 M3, followed up by a drive in a second-gen ’95 M5 and many more recent M experiences since, but there’s no way you could’ve told me a month ago that my new favourite M-badged BMW would be an SUV.

It’s a clear sign that I’m aging and prioritizing what matters most under the luxury and refinement categories rather than all-out performance, but while this X5 M is endowed with what is by far the most enticing BMW interior I’ve experienced yet, let alone one of the best quality and most stylish SUV cabins ever created, the X5 M is also a mighty skilled performer when called to task. It looks pretty damn good too.

Inside it’s “a wow factor times ten!” or so said my notes, whatever that’s supposed to mean. I was taken aback, as I’m sure you would be at first sight of my dazzling Donington Grey Metallic painted tester with its even more amazing Mugello Red full Merino leather interior, a $4,500 option albeit money well spent, its gorgeous Trace Aluminum textured inlays and piano black lacquered wood trimmed detailing only heightening the brilliance of this design. I’m guessing black, light grey, beige or camel brown leather would look nice, but it took the red and black stitched leather instrument panel, the black leather dash top highlighted with red contrast stitching, the same red and black leather effect on the sides of the centre stack and lower console, yet more on the door panels, and those fabulous M Multifunction seats to sear my retinas ahead of spewing nonsensical verbiage. Simply gorgeous!

These came as part of the $7,500 Premium package, again money well spent for the office chairs alone, but you also get ventilated cushions up front, manual side sunshades in the rear, a suede-like black alcantara roofliner over all, satellite radio, a surround view monitor replacing the standard rearview camera, lane departure and collision warning, active blind spot detection, speed limit info and active seatbelt protection.

And then there’s the quality. The X5 already starts with the best fit, finish and materials quality in the segment. Nobody does buttons, knobs and dials better than BMW, with all of the switchgear made from the highest quality composites with exact fit and just the right amount of damping. Its graphic interfaces are brilliant too. The X5’s infotainment display is permanently fixed to the dash top in an ideal position for viewing while keeping eyes on the road, while the primary instruments are more purposefully simple, with the brand’s four dial setup laid out in classic efficiency, a small but useful high-resolution multifunction display squeezed between the two main gauges. HVAC and audio controls are laid out intuitively as well, as is the iDrive controller and associated buttons on the lower console, the former now featuring a matte-black top surface that acts as a touchpad for finger-gesture inputs.

A row of three drive mode buttons sit to the left of the shifter, the first for the engine, second for the suspension and third for steering, allowing Efficient, Sport and Sport + settings for the first, plus Comfort, Sport and Sport + modes for the latter two. As you can imagine I played around with the variety on offer and was always able to find the ideal combination to match road conditions and my mood, although with 575 horsepower and 553 lb-ft of torque on immediate call from the X5 M’s 4.4-litre direct-injected twin-turbo V8, paddle-shifters for the eight-speed Sport automatic transmission at my fingertips and the knowledge of a dynamic adaptive suspension connected to the aforementioned 21-inch rims and rubber, not to mention ventilated M brakes at all four corners and a menacing growl from ahead of the firewall joined by an even more threatening exhaust note, that mood was almost always thinking dark Mephistophelean thoughts.

Yes, an X5 xDrive35d might be the better choice for hanging onto my license, but as it was the X5 M had hold of my power for cognitive reasoning, its outrageously quick 4.2-second sprint to 100km/h and the neurotransmitters released playing mind games with my right foot, the inexplicably exacting shifts from the eight-speed autobox, ridiculously deft handling underfoot and stupefying braking power leaving my head swirling and mouth emptied of words, incomprehensible babble (yes, the usual drivel, I know) blurting out in spurts and fits between a psychotic chuckling that had my partner more than concerned. I never saw its 250 km/h (155 mph) terminal velocity, nor did I even attempt it, but I have no doubt it could attain it and likely cruise up their all day if limits allowed, but no such opportunities exist anywhere near where I live, even on the one, single abbreviated racetrack.

Of course, most don’t buy high-powered machinery like the X5 M to actually utilize their performance capability daily, or much at all. Like the supercars that fill Vancouver’s Robson Street on a given Saturday or those running up to Whistler for the weekend, they’re owners are content to drive something beautiful that can overpower the majority of surrounding cars while enjoying the exclusivity of a vehicle few others can even hope to afford.

On that note the X5 M is very well priced considering its beauty, capability and rarity at $105,900 plus $2,095 for freight and pre-delivery prep. Of course there are the options already mentioned, plus other items like $4,500 for the Bang & Olufsen audio upgrade, $1,950 for a rear entertainment system with individual screens set into the front seatbacks, $2,500 for Night Vision with pedestrian protection, $600 for convenience telephony, $450 for automated parking, $395 for a ski/snowboard bag, plus more, and whether dressed up to the nines or bone stock it’s as capable of cruising around town, loping along the highway or any other kind of legal activity as it is otherworldly in its ability to defy natural laws.

It’s as practical as most X5s as well, with accommodating seating for five occupants (there’s no third-row option), a total of 1,014 litres (35.8 cubic feet) of stowage space behind the second-row and up to 2,172 litres (76.7 cubic feet) when the convenient 40/20/40 split seatbacks are folded flat, plus a large storage compartment under the load floor. Even its five-cycle EnerGuide fuel economy rating isn’t too bad at 14.6 L/100km combined.