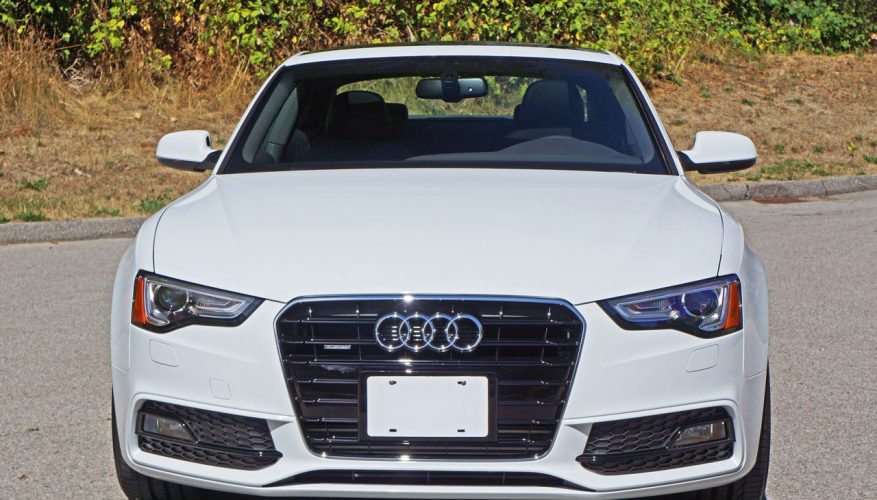 By: Trevor Hofmann
Let’s face it. Some cars are simply better than others. Take Audi’s A5. From styling to engineering it was a winner from day one, and nearly nine years later it’s still a beautiful luxury coupe that sells more than five times better than it did when new.

Crazy, huh? After only 35 units left Audi Canada showrooms in 2007, the A5’s first full year of sales only resulted in 400 deliveries across the country. I don’t know why 2008 was such a dud. Maybe it was an allocation issue or possibly it took a bit of time to get sales traction, but I’d find that latter hard to believe. Just look at it. I could call Audi’s PR department to find out the “real” reason and while I’m sure I’d get an answer, I’d likely end up being fed some slick marketing spin, yet that would hardly matter anyway. The hard numbers show that sales picked up quickly, 2009 ending in 1,520 A5s out Audi Canada’s collective dealership door, 2010 resulting in 2,309 deliveries, 2013 being the first full year after its gloriously edgy facelift and a significant 2,351 sales making it the A5’s best year to date, and even on its way out to the proverbial pasture the 2014 calendar year totaled an impressive 2,165 units. The 2015 model year is the A5’s last ahead of it going into hibernation and it’s still selling strong with 1,195 down the road during the first eight months of this year, although I’m sure sales would be higher if more were available, local dealers in my area having no trouble selling the stock they have.

It’s no wonder. After all these years it still looks gorgeous, the A5 even more appealing in my tester’s sportier S Line trim than in its already stylish stock duds. The grille isn’t quite as chiseled as the new 2016 A6, that model having more recently been refreshed, but the A5’s aforementioned mid-cycle update still makes it look forward thinking and the glossy black grille insert of my Progressiv trimmed test car was especially stylish, while cutting-edge LED-infused headlamps hover above a razor thin lower valance that appears anything but dated, my tester’s S Line Sport package upgrades further enhancing the look with stunning twinned seven-spoke 19-inch alloy rims on 255/35R19 Pirelli P Zero performance rubber framing massive rotors on simple silver-painted calipers, and black exhaust pipes poking out the back end. The A5’s rear design is an exercise in styling restraint, its elegantly understated taillights only marred by parent company Volkswagen using near identical lenses for its entry-level Jetta. Still, the entire car is an ideal example of how good design can last nearly a decade.

Inside, a full soft synthetic dash top wraps over the instrument panel ahead of the front passenger and down each side of the centre stack, although hard matte plastic surfacing next to the primary instruments, plus the same hard plastic used for the glove box lid and lower instrument panel mars the beautiful design with less than ideal execution. Soft-touch door panels from top to bottom raise the A5’s game, however, with nicely padded door inserts and comfortable rubberized armrests, not to mention rich felt lining for the top portion of each door pocket and a nicely textured lower portion.

In typical Audi fashion, plenty of brushed aluminum trim can be found on those doors as well as elsewhere around the cabin, while glossy piano black lacquered trim surrounded the primary gauge package, surfaced the centre stack and brightened the MMI infotainment controller panel on the lower console. The pièce de résistance was a gorgeous three-spoke flat-bottomed sport steering wheel with aluminum-look paddles and dimpled leather for the handgrips, the same as used for the shifter grip.

That steering wheel, those paddles, the piano black interior trim and brushed aluminum comes as part of the previously noted S Line Sport package, the $1,700 upgrade including the items already mentioned as well as stainless steel pedals, aggressively bolstered and incredibly comfortable sport seats with powered actuation including both driver and front passenger lumbar adjustment, a black headliner that extends down each roof pillar, and a sport suspension.

As you might expect from a specially tuned sport coupe shod with 19-inch P Zeros the A5 S Line manages corners with a level of athleticism worthy of its go-fast styling, its ability to unshakably hold its line while being aggressively pitched from side to side impressive, its overall balance wonderfully neutral with only a slight tendency to understeer at the limit. That’s the best response for most drivers. While dragging a car’s tail around a corner sideways amid drifts of smoking glory looks great when spectating from a distance, it’s not what the majority of weekday workers cum weekend warriors want to experience when pushing the envelope in their pricey super coupe. A tiny bit of oversteer might feel exciting once in a while, but to most it will feel like you’ve lost control after which, if you haven’t been trained how to respond and then do so with lightning quick reflexes, you can end up spinning right around and possibly hitting something or someone in the process. On the contrary you’ll find it difficult to lose control of the A5’s rear end, its standard Quattro all-wheel drive simultaneously pulling the front end back into check with any additional wheel slippage kept in check via electronic stability and traction control systems.

On this note the A5’s drivetrain won’t likely get you in too much trouble too quickly anyway, the direct-injected and turbocharged 2.0-litre four-cylinder’s 220 horsepower and 258 lb-ft of torque fully capable of attracting the attention of your local constabulary, the A5’s 6.5- or 6.3-second (six-speed manual or eight-speed auto) sprint to 100km/h grin-inducing enough for most and its 209 km/h (130 mph) top speed well beyond most impoundment regulations, but I didn’t find myself dipping deeply into the throttle or flicking the paddles for the sake of hearing the exhaust note as often with the A5 as I did with the 333 horsepower S5. Lord knows I’d lose my license if I had a 450 horsepower RS5 to drive on a daily basis.

The A5 is the responsible sport coupe owner’s ride, and to that end it delivers a comfortable, compliant ride, easy maneuverability around town, wonderful cruising capability on the highway and, as mentioned, plenty of go-fast goodness when the road starts to wind. That it’s capable of such excellent fuel economy when driven moderately is just another bonus which sets this sport coupe apart from most rivals, its five-cycle EnerGuide rating just 10.6 L/100km in the city, 7.3 on the highway and 9.1 combined with its six-speed manual or 11.0 city, 7.8 highway and 9.6 combined with the as-tested eight-speed Tiptronic automatic.

Now that I’m talking about practical issues, front seat roominess is extremely good and, while not needed for my five-foot-eight frame, the leg extensions on the front cushions would no doubt be a positive for taller folks. Notable, I also had no problem in the back seats with ample room for my knees if someone similarly sized was occupying the driver’s position, but anyone taller would likely find their head butting up against the roof. This is par for the course in the sport coupe segment, Audi making a number of perfectly suitable four-door sedans and a bevy of crossover SUVs for such uses.

The A5’s 345-litre (12.2 cubic-foot) trunk is good for more than just the morning commute and weekend getaways, however, its capacity only a fraction less generous than the A4’s boot and therefore able to swallow up boxes full of on sale groceries plus the end result of an afternoon’s mall shopping frenzy, not to mention impromptu garage sale purchases. It’s good for sports equipment too, with 60/40 split-folding rear seatbacks that allow seating for four with all the ski gear aboard.

Lastly, Technik trim, which starts at $51,600, incorporates most Progressiv features plus adaptive cornering headlights, a Bang & Olufsen audio upgrade, a rearview camera, a universal garage door opener and Audi Side Assist to warn of adjacent traffic.

The automatic transmission will cost you $1,600 extra, while a long list of packages and standalone options can easily push your A5 into the mid-$60k range, which is still very reasonable for such a stylish and capable premium coupe.

If you’re lucky enough to get one of the last remaining A5 Coupes available, you’ll be buying into an immediate classic that will continue to look contemporary for years to come and who knows, may be collectible one day. Beautiful cars often are. No doubt the second-generation A5 will be sinfully attractive, but Audi will have put in long hours to create anything as breathtakingly beautiful as this current model, and there’s no way of knowing if the forthcoming two-door manages to be anywhere near as alluring after almost nine years of production.

The A5 is one of those rare designs that overcame the test of time.
©(Copyright Canadian Auto Press)
Car Shopping Tools