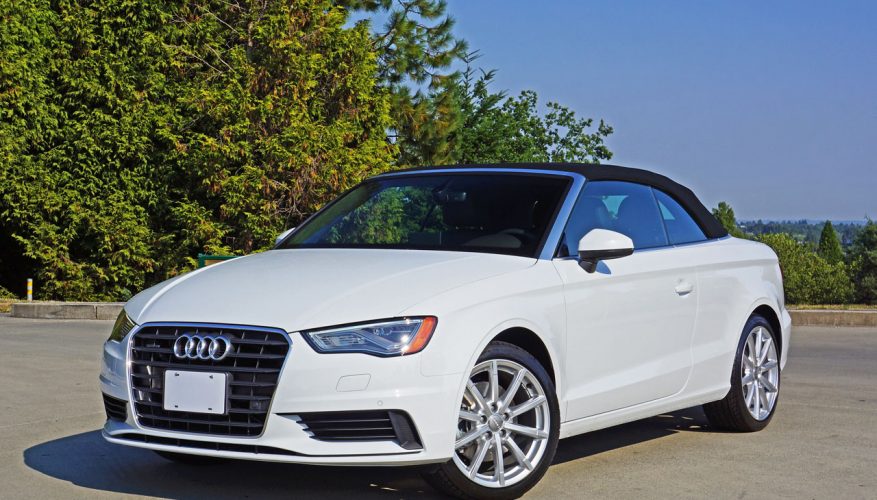 By: Trevor Hofmann
Audi hasn’t had a sedan-based convertible in its lineup since the advent of the A5 Cabriolet in 2009, at least not in name, so the A3 marks a return to a formula that won a lot of fans over to the four-ringed brand during the A4 Cabriolet years.

The A3 Cabriolet is significantly smaller than any A4 Cab, a car that was already shorter than the A5, so it literally opens Audi up to a new market segment not available to the Ingolstadt brand prior to the new model’s introduction last year. Previously, these buyers looked to BMW’s old 1 Series Cabriolet or Volkswagen’s Eos and others in the mainstream volume sector, but ask any in this latter crowd if they’d rather drive an Audi for the same price and you’ll get a vigorous nod.

The A3 Cabriolet can actually be had for a bit less than the current Eos, at $42,600 compared to $42,990, but to be fair VW’s four-seat convertible gets a retractable hardtop and is only available in one fully-featured Wolfsburg edition for 2015, plus the compact Volkswagen drop-top will be axed at the end of this year or when the last few trickle off dealer lots, whichever comes first. Your guess is as good as mine, but the A3 Cabriolet may have had something to do with the Eos’ fate. As riveting as the news of this VW’s demise is you’ll probably be more interested in knowing that the A3 Cab is priced $2,210 lower than its main rival, the BMW 228i xDrive Cabriolet.

For this reason and many more the fresh new A3 Cabriolet shows no sign of lagging sales, the drop-top joining Audi’s completely reimagined A3 Sedan as well as a sporty S3 variant of the latter, altogether accounting for 2,452 Audi Canada sales last year and 2,719 units already down the road during the first eight months of 2015. That’s a big jump compared to the best year of A3 Sportback sales, which peaked at 1,531 units in 2006 and came pretty close to matching that number in 2013 with 1,409 deliveries. A renewed version of that hatchback model is already on sale in other markets while the latter in five-door front-drive TDI trim is now available here, but that’s a practical family hauling story for another time, as the A3 Cabriolet is only practical when compared to other compact convertibles.

On that note the rear seats are actually usable by small to mid-size adults and relatively comfortable, while the trunk isn’t bad either at 286 litres (10.1 cubic feet) with the top down or a considerably more generous 348 litres (12.3 cubic feet) with the top up and divider out of the way, which incidentally makes it a bit bigger in both configurations than that 2 Series convertible just mentioned. What’s more, my tester included optional 50/50 split-folding rear seatbacks for added cargo/passenger versatility, a step up from the base A3 Cab’s single-folding rear seatback and also better than all 2 Series drop-tops on offer, which eliminate both rear passengers from the equation when folding their one-piece seatback down. Additionally, a handy lever on each side of the A3 Cab’s cargo wall makes dropping those split seatbacks conveniently easy.

That A3 Cabriolet’s electrohydraulic fabric top comes down or goes up quickly and easily too, the task taking a mere 18 seconds. That’s quick enough to deploy while waiting at a stoplight, but not to worry if the light goes green as it will continue opening or closing at speeds up to 50 km/h until finished. The car delivers coupe-like quietness when upright too, much thanks to multi-layer roof construction that includes a full layer of sound insulation. And while we’re on the subject of soft sound absorbent roofs, the A3 is protected during rollover collisions via a reinforced windshield frame and active roll bar-like plates positioned behind the rear seats that instantly spring into place when a rollover is detected.

For something so utile it certainly looks good. The sporty yet elegant design is especially impressive given the car’s short, wide stature, Audi’s bold singleframe grille, attractive LED-infused combination headlamps and razor sharp-edged lower fascia making almost as big a visual statement on this compact as with the brand’s larger cars, while its gorgeous aluminum-finished A-pillars are right out of the A5 Cabriolet playbook. The A3 drop-top’s profile looks more A4 Cab than A5, however, this due to a more upright stance, straight beltline, shoulder line and base line elements, plus a deeply sculpted bone line that rises gradually from front to rear yet is still devoid of the larger convertible’s sexy curves. Still, a fully integrated deck lid spoiler adds a tasteful hint of the performance to come, whereas the lower extremities of its rear end design are finished with a matte black diffuser-style valance featuring chromed pipes at each corner for dramatic effect, while its sharpened blade-shaped taillights are to die for.

The wheels on this mid-grade Progressiv model are a stylish set of 10-spoke 18-inch alloys on 225/40R18 Continental ProContact all-seasons, replacing standard 17s, and despite these not being the most tenacious shoes in the A3 Cab’s closet they gripped tarmac well enough for all but the most extreme aggressiveness. Then again, even when I pushed the little convertible too hard through a particularly serpentine set of S curves it took to each corner effortlessly without a single chirp of complaint from the rubber below, while the body always felt taut and rigid with the top up or down. The A3 Cabriolet is thoroughly enjoyable on the highway too, where it settles into the role of quiet, comfortable traveling companion perfectly. Around town it was as easy to pilot through busy thoroughfares as any Audi I’ve experience before, while the same front strut and multi-link rear suspension that’s so capable when mixing it up in the twisties showed comfortable compliance over rough pavement.

No matter where you’re driving the A3 Cab’s acceleration off the line is strong with speed really picking up as the revs rise, Audi’s direct-injection and turbocharged 2.0 TFSI ideal for overcoming the A3 Cab’s 1,625-kilo (3,582-lb) mass. A total of 258 lb-ft of torque allows good initial jump with full twist available from just 1,600 rpm, whereas standard four-wheel Quattro traction makes sure all the power gets to the ground no matter the condition of road underneath, while the 2.0-litre mill’s 220 horsepower keeps adrenaline on tap for a spirited sprint from standstill to 100km/h of only 6.3 seconds before attaining a claimed 209 km/h (130 mph) terminal velocity. Even when flicking its lightning quick shifting paddle-shift actuated six-speed S tronic dual-clutch automated transmission to its final gear ratio I never saw the trees blur past at such speeds (and would never admit to it if I had), but I experienced the quick rush of speed up to more conservative limits and while not quite as zippy as the aforementioned Bavarian it’s still amply enjoyable.

Then again the A3 Cabriolet delivers slightly better fuel economy than the base Bimmer convertible at 10.1 L/100km in the city, 7.5 on the highway and 8.9 combined, thanks in part to a sophisticated idle start/stop system and other eco-goodies, but where the car truly shines is in its combination of performance and comfort, the seats wonderfully cradling due to standard 12-way adjustability including four-way lumbar modulation. They’re leather covered and three-way heatable too, whereas the thick, meaty multifunction steering wheel also gets the leather treatment as does the gearshift knob and skirt.

You can upgrade the Komfort trimmed A3 Cab with a $900 Styling package that adds xenon plus HID headlights with automatic leveling and LED taillights, whereas a $1,000 Premium package adds rear parking sensors and proximity-sensing keyless access to the standard pushbutton ignition system. Additionally, Audi’s music interface can be had for $350, a set of 18-inch rims for $800, plus the choice of three no-cost solid paint finishes and seven $800 metallic hues, as well as brown leather and a brown roof at no charge, depending on the exterior colour chosen.

Top-line Technik trim includes standard proximity sensing keyless access, a backup camera, navigation, an upgraded Bang & Olufsen audio system, a full-colour multi-information system ahead of the driver, Audi side assist that warns of approaching traffic on both sides of the vehicle, plus front and rear parking sonar, while no-cost 3D-look inlays can be added too, as can the aforementioned 19-inch wheels, S Line Sport package and LED Lighting package. Unique to Technik trim is the availability of a $1,400 Technology package that adds adaptive cruise control with stop and go capability, active lane assist, and a more advanced pre-sensing crash system. With the Technology package selected, active lane assist is also available.

Much of this impressive equipment comes in a cabin featuring a full soft touch dash top that wraps all the way down the instrument panel, albeit not so far to include the lower dash in front of the driver and glove box ahead of the front passenger. The door uppers and rear window sills are soft touch too, but most of the door panels are made from a durable harder plastic, as is the entire centre console, all of which seems to be par for the course in this class.

My tester’s aluminum trim was beautifully done, especially the thicker band that ran right across the dash and around the cockpit, while the vent bezels included stylish aluminum grips for a cool look and greater usefulness. Additional aluminum trim surrounded the shifter and MMI controller, while the latter includes a thinner, wider dial that’s an improvement in design, feel and functionality over its predecessor, its matte-black top actually a touchpad for finger-gesture inputs. It connects through to a high-resolution infotainment screen that powers up out of the dash upon startup, and for those who’d rather have it hidden away, can be powered down while driving by pushing a button on the centre stack. Likewise the dual-zone auto HVAC interface is a real thing of beauty, while graphically stimulating and ultra-easy to use. Last but hardly least, the A3 boasts some of the best switchgear in the Audi lineup, with tight fitting, nicely damped buttons and knobs made from better than average materials, plus a row of toggles across the centre stack that feel as if they’re constructed from solid composite.

There’s a lot to love about the new A3 Cabriolet. From its sharp styling to its even sharper response on the road, it’s an energetic little drop-top that simultaneously delivers a high level of refinement and plenty of practicality for the class. Don’t let this one pass you by.
©(Copyright Canadian Auto Press)
Car Shopping Tools