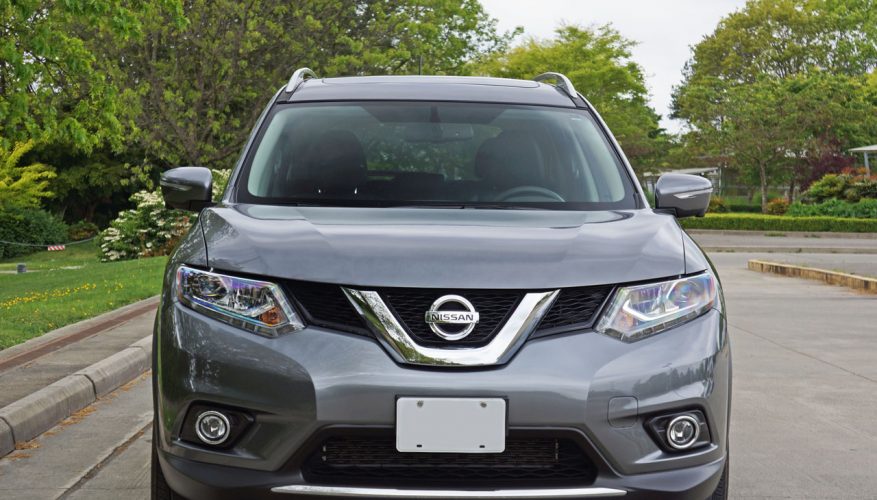 By: Trevor Hofmann
In case you hadn’t noticed, Nissan’s got its mojo back. One look at the sexy new Maxima or ultra-hot Murano and you’ll understand just what I’m talking about, the brand’s recently redesigned flagship duo delivering shockingly bold style, beautifully creative interiors, impressive driving dynamics and seriously aggressive pricing with resultant sales that are way up over last year, but if you want to look at the model that’s most responsible for Nissan becoming Canada’s fastest growing brand, look no further than the Rogue.

The compact crossover SUV has always been a strong seller for Japan’s second largest automaker, but the growth experienced since this second-generation model launched across Canada in November of 2013 has been phenomenal. Its comparatively timid looking predecessor, which never seemed capable of living up to the model’s studly albeit ill-conceived name (which actually refers to a dishonest or unprincipled man, a scoundrel, villain, miscreant, reprobate, rascal, good-for-nothing, ne’er-do-well, wretch, rat, dog, louse, crook or cad, or otherwise an animal with savage or destructive tendencies-clearly a what were they thinking moment), repeatedly sold in the 13,000 to 14,000 range since its first full year of availability in 2008, whereas calendar year 2014, the first full year of the latest Rogue, saw sales rise to 28,827 units, a tally that already seems to be on the rise with the first seven months of 2015 adding up to 20,564 sales, these numbers making it the best-selling model within the entire Nissan Canada lineup. Impressive yes, but that’s not the most interesting part of this story. If Rogue manages to continue its upward surge it will bypass last year’s second-best selling Honda CR-V for the first time ever, its current 2015 YTD tally outpacing the popular rival by 1,644 units.

Changes that are helping the new Rogue become more popular include the option of third-row seating for up to seven occupants, the introduction of Pure Drive efficiency and emissions reducing technologies, electric power-assisted steering, additional standard upgrades like Active Trace Control, Active Engine Braking and Active Ride Control, and of course its handsome gen-two styling.

I subtitled last year’s Rogue review, “The ugly duckling transforms into a swan,” and while this might have been harsh judgment of the first generation Rogue it was no secret that I had been openly critical of its limp-wristed non-roguish character before. The new model has obviously been spending mornings at the gym as newfound guns are visually evident and therefore it’s firmed up its grip and forever left its cold sweaty palms in the wake of slippery new bodywork. If there were a way of measuring sales success via specific attributes I’d be willing to bet styling is 99.9-percent responsible for the new model’s winning ways, but I’d be remiss in not covering its other qualities so here goes with the other 0.1-percent.

Seriously though, if the Rogue didn’t deliver what it needed to fully compete as a compact crossover SUV it would never have even averaged 10,000 units as the X-Trail in the mid-aughts, but that model was very good at the tasks required, as were/are the previous and current generations that came after, both still dubbed X-Trail in other markets. This said I’m willing to bet there are some first-gen X-Trail owners still lamenting the loss of the IP-mounted cupholders that either heated or cooled your beverage via dash ventilation… I know I still am, but I digress. The current Rogue fits the compact CUV bill to an X and a T, with a fully accommodating and comfortable interior, a compliant ride and amply good performance, plus impressive fuel economy.

Despite the Rogue’s styling and interior finishings it doesn’t duke it out in the premium sector so fuel efficiency is still a critical component to attracting buyers, and like I just inferred this Nissan doesn’t disappoint with a five-cycle EnerGuide rating of 7.2 L/100km in the city and 9.2 on the highway in base S and mid-grade SV front-wheel drive trim or 7.4 city and 9.5 highway in as-tested SL AWD guise.

That AWD system is smartly dubbed Intuitive All-Wheel Drive as it reportedly understands when you’re merely cruising along or aggressively taking it through the corners, plus whether or not it’s on- or off-road before automatically reacting as required. While we saw almost zero snow on the West Coast this year I experienced the system’s capability over slippery winter roads and snow covered ski resort parking lots in last year’s tester and was duly impressed, and would expect it to be similarly up to task on gravel or any other type of loose surface.

No matter the trim or choice of front- or all-wheel drive, the Rogue’s drivetrain is comprised of a DOHC 2.5-litre four-cylinder engine with continuously variable valve timing on the intake and exhaust valves that’s capable of producing 170 horsepower and 175 lb-ft of torque, mated to an Xtronic continuously variable transmission with Sport and Eco modes. Hill start assist is standard whereas hill decent control comes with the AWD system, while a fully independent suspension with struts up front, a multi-link setup in the rear and stabilizer bars at both ends delivers that compliant ride I mentioned earlier, aided, incidentally, by Active Ride Control, a technology that automatically applies the brakes and adjusts engine torque after going over a bump to effectively smooth out rougher patches of pavement. The Rogue’s handling is more than adequately responsive for the class too, its standard Active Trace Control automatically engaging the stability control system to improve cornering feel by automatically adding brake pressure when required, and engine performance is good enough to get you in trouble with the law if you’re not careful.

I think it’s fair to say the Rogue is more about comfort than speed, but it’s also evident, at least by sales, that the vast majority of buyers in the compact CUV segment aren’t looking to light up the tires at every stoplight or pull excessive Gs while bending the ute around fast-paced cloverleaf highway onramps (these types of shamelessly teenage shenanigans are best left to, ahem, professional automotive journalists), so while some of my colleagues complain that there’s not enough power under the Rogue’s hood or the CVT feels a bit listless compared to double-clutch automated manual gearboxes, I respond that it’s the smoothest transmission type in its class and makes wonderfully efficient use of the power available.

Like comfort and fuel economy, safety isn’t a particularly sexy topic either, but once again it matters a great deal to buyers in the family hauling class and therefore you’ll be pleased to know the Rogue serves up standard four-wheel discs with ABS, electronic brake-force distribution, emergency brake assist and active engine braking, the latter a technology that forces the CVT to use negative engine torque to help slow everything down smoothly with reduced brake pedal effort. Of course all of the usual passive safety equipment is standard too, with tire pressure monitoring joining a full assortment of airbags, while the top-line SL AWD can be optioned to include premium-level LED headlights, Blind Spot Warning, Lane Departure Warning, Forward Collision Warning and Moving Object Detection.

I’ll go on record claiming you won’t be thinking about safety gear after you climb inside the Rogue’s cabin, at least if it’s optioned out in SL AWD trim. The seats are covered in leather while the dash top and front door uppers are finished in luxurious soft-touch synthetics, the model’s harder plastics of the non-gloss matte persuasion and therefore appearing more upscale while delivering the ruggedness needed for family use. Nice touches like piano black lacquered surfaces surround the centre stack and lower console-mounted gearshift lever plus even more enticing carbon fibre-like inlays add some flash to the dash and door panels, the entire interior punching way above its price class.

That price range starts at $24,448 plus $1,760 for freight and dealer prep for the base S model, whereas an SV will set you back $28,348 and SL AWD a total of $35,048, but that’s before adding on my tester’s aptly named Premium package that includes a larger seven-inch touchscreen infotainment display with navigation and Nissan’s impressive Around View backup monitor (that replaces the standard RearView monitor), plus an impressive sounding nine-speaker Bose audio system and a handy powered liftgate, all for $3,000.

The nice big panoramic glass sunroof overhead is standard kit with the SL AWD, grandfathered up from SV trim, as are audio, cruise, phone and multi-information display switchgear on the spokes of the exclusive leather-wrapped steering wheel that forms a circular frame for the sporty styled two-dial primary gauge cluster, a tachometer to the left and speedometer on the right, centered by the aforementioned full-colour multi-information display, while a helpful grouping of buttons on the lower left of the dash allows selection of the optional powered liftgate (which includes a button for turning off the powered hatch – very smart), hill decent control, all-wheel drive lock, a somewhat poorly located Sport mode button, and a switch to turn off the stability control system.

On the opposite side of the steering wheel a start-stop button comes as part of the Rogue SL’s standard proximity-sensing Smart Key system (also pulled up from SV trim) that also lets you in the car without prerequisite key searching. Additional items that get added from SV trim include auto on/off halogen headlights, fog lamps, a six-way powered driver’s seat with power-adjustable lumbar support, fast-reacting Quick Comfort heatable front seats, and a retractable cargo cover.

I thought it was odd that Nissan Canada didn’t equip this year’s tester with a third row of seats being that last year’s SL AWD didn’t include the option either, so I have nothing to report on in this regard, other than to say you’ll need to go down market to SV trim in order to add more passengers. Of course, the Rogue comes by its new third row via increased length, wheelbase and height, while the rear doors now open wider for improved ingress and egress whether that third row is installed or not.

I found the rear seats extremely accommodating with plenty of head, leg, shoulder and hip room, while this five-passenger example came equipped with a wonderfully versatile rear seat setup that not only included a fold-down centre armrest filled with dual cupholders, but that armrest opened up a centre pass-through to allow longer items to rest in the middle while rear occupants enjoyed the outboard seats, ideal for a skiing family.

Nissan provides up to 1,112 litres (39.3 cubic feet) of gear-toting space behind the second-row seats, while a handy split movable/removable carpeted load floor suitably named Divide-N-Hide Cargo System makes the luggage area much more useful thanks to a variable-level shelving system overtop a deep well of storage compartments. Lay these at their lowest position and flip down each side of the 60/40-split second row and 1,982 litres (70 cubic feet) of building material capable capacity makes itself available, plus the Rogue’s EZ Flex front passenger seat can be folded flat for extra-long items that are impossible to fit inside less accommodating competitors. See what I mean about character traits that go above and beyond styling? The seven passenger Rogue allows 266 litres (9.4 cubic feet) of stowage when all seats are employed, by the way, par for the course when three rows get stuffed inside a compact CUV.

The sum of all Rogue parts is far from par for the course, however, but rather make it a clear leader in the ever more competitive compact crossover class, and as I’ve repeated, its heightened sales volume confirm its many improvements. If you’ve never given Nissan’s small SUV entry much thought before, and you can hardly be blamed for not noticing the old model’s bland styling, don’t let this new one pass by without giving it a thorough rundown as it easily deserves your attention.
©(Copyright Canadian Auto Press)
Car Shopping Tools