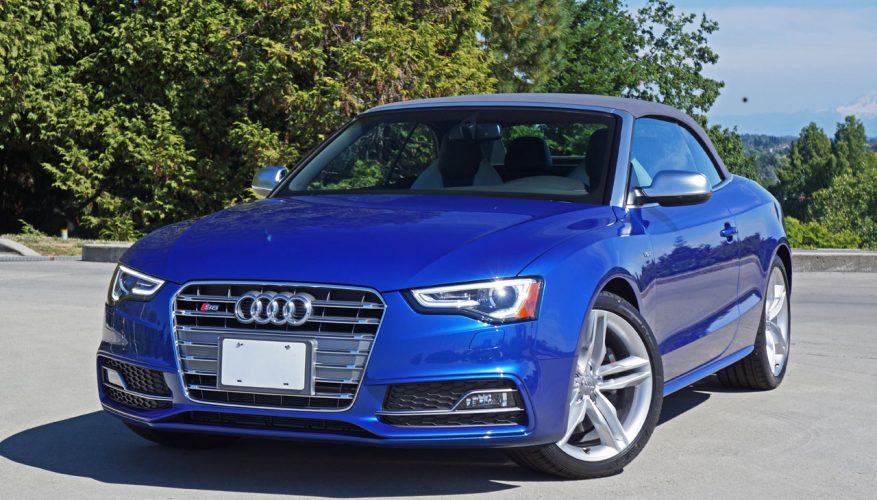 By: Trevor Hofmann
Frankly, I wasn’t expecting to be impressed by the S5 Cabriolet I recently drove. Oh, don’t get me wrong. I laid the accolades on pretty thick after a weeklong stint behind the wheel of a 2010 model that was done out in the same gorgeous hue of Sepang Blue Pearl paint, but that was five years ago and all we’ve seen since is a mild, albeit arguably effective mid-cycle makeover for the 2013 model year. Under the skin, ladies and gentlemen, the S5, like the A5 it’s based on, is an eight-year-old design, the automotive equivalent of an octogenarian in people years. I hate to admit it, but I love it when I’m proven wrong.

Despite how many S5 Cabriolets have passed by Vancouver’s jaded car enthusiast crowd over the past octennial, the car still turns heads as quickly as it ever did, no matter where you’re driving. People stop in their tracks and stare. Truly, I never experienced anywhere near this much attention at the wheel of a brand new Rolls-Royce Ghost Series II done out in a near identical electrifying azure colour. The large imposing chiseled singleframe grille (I’m talking Audi now), shapely LED-enhanced headlamps, sharp detailing on the lower fascia, stunning satin aluminum surface treatment covering the A-pillars, mirror caps, rear roof surround, and lower bumper garnish, plus the simple yet undeniably elegant LED taillights are all so upscale. A quick sideways glance at its rear end passing by could make you think you’ve seen a Bentley (sorry Rolls), albeit a smaller, sportier Bentley than the ultra-luxury British brand actually builds. And why not, the grey diffuser infused rear bumper with quad pipes poking through certainly gives onlookers the impression of ultimate class mixed with superlative performance.

Fortunately it delivers. OK, maybe not to Rolls or Bentley levels, or even Audi’s own RS5 Cab for that matter, but the 333 horsepower 3.0-litre V6 under the S5’s long, lean hood is certainly capable of an invigorating sprint from standstill accompanied by an almost diesel-like muted growl as revs rise, not to mention a menacing wastegate-like bark every time the seven-speed S tronic dual-clutch transmission shifted gears; although not a mere mortal diesel, but rather a Le Mans-winning Audi TDI.

I was trackside at the finish line, camera in hand in 2006 when Audi Sport Team Joest took first and second place at the 24 Heures du Mans in its then new R10 TDI, the first of three consecutive wins for that diesel-powered LMP1 sports car, and I can remember the awesome whoosh of near silent power as those two whisked around Porsche Corner at five in the morning earlier in the race, my enviable vantage point giving witness to a racing spectacle that would never be the same thanks to this innovative German brand. How I would’ve loved to hear Audi Sport North America’s R15 TDI do it again in 2010, Team Joest’s R18 TDI repeat the performance in 2011, and the even more hushed reticence of the R18 e-tron quattro continue the four-ringed brand’s Le Mans dominance from 2012 through 2015. In case you haven’t figured it out yet, Audi is a very unique automaker that does a lot more than build beautiful road cars, but I digress.

The 3.0 TFSI behind the S5 Cabriolet’s handsome grille might have some TDI DNA built in, but it’s no diesel. Certainly TDI technology has proven itself on the track and therefore would likely suffice under the S5’s hood if sufficiently tweaked, at least if fuel-efficient high-speed endurance was what such a buyer were looking for, but Audi is smart enough to realize you’d rather have high horsepower for seat of the pants acceleration, whether taking off from zero or passing a highway truck on a curving two-laner, and that kind of performance is best experienced via a gasoline-powered engine. The diesel tech comes by way of direct injection, hardly exclusive to Audi these days but nevertheless important to the TFSI’s go-power and efficiency, while superchargers have a long history of making diesels and gasoline-powered engines more engaging at high speed.

Along with the 333 horsepower that gives the S5 Cab its passing power, the sleek drop-top gets 325 lb-ft of torque for a spirited sprint to 100km/h of just 5.1 seconds, which for reasons unknown is rated 0.2 seconds quicker than the car I drove in 2010. That latter car featured the identical supercharged six and seven-speed S tronic that Audi uses today, having just replaced the 354 horsepower 4.2-litre V8 and six-speed manual or auto combination utilized up until then. The more efficient duo allowed the S5 to achieve better fuel economy numbers, which have now been five-cycle EnerGuide adjusted to 11.4 L/100km city, 13.3 highway and 9.1 combined, while helping Audi meet ever more stringent governmental regulations, and therefore the horsepower haircut was made more palatable, but DIY fans had to say goodbye to the six-speed manual in the process, something that was much more difficult for many to give up. And don’t think that moving up to the 450 horsepower RS5 will magically bring that manual shifter back. While that model enjoys the benefits of a much-improved 4.2-litre V8, the old cog mixer is long gone.

I, for one, don’t miss it. Call me a turncoat, one of the paddle-shift converted, or before you judge me too harshly, simply call me the uninitiated; I don’t miss it because I never experienced it. I was editor to four S5 reviews before I personally got my hands on the flat-bottomed wheel of that 2010, and you can’t miss what you’ve never had. You can conjecture as to what it might have been like, but we’ve all seen enough courtroom drama to know how such folly turns out. Truth is, Audi left the technology in the dust in the S5 for the same reason it no longer offers it in the TT, there simply aren’t enough takers because the S tronic delivers superior performance as well as urban ease of use.

The S tronic suits the S5 Cab better anyway. Try to imagine manually swapping gears in a Bentley GTC? You’d feel like a prole. Yes, I’m aware that I’ve availed that Crewe comparison already, but until you’ve actually touched the proximity sensitive door handle to gain access to an S5, stepped over its model-branded red and silver aluminum doorsills and slid your backside into the meticulously crafted body-hugging two-tone Nappa leather-clad and contrast stitched sport driver’s seat, let your eyes soak up all the fabulously detailed aluminum trim and carbon-fibre inlays, pressed the ignition button on the lower console and felt the restrained TFSI spark to life, adjusted the powered seat for the best possible fit via metal trimmed switchgear and then powered the adjustable lumbar for maximum lower back support, adjusted the perfect rake and distance for the three-spoke flat-bottomed multifunction contrast-stitched leather-clad steering wheel, set the memory function for the convenience of your next trip, modulated its tri-zone automatic climate control to your optimal temperature, allowed Bluetooth hands-free to automatically connect your smartphone, or plugged in that phone or any other device to access favourite tunes from your personal playlist via the superb 10-speaker AM/FM/CD Concert audio system or alternatively selected something from its standard satellite radio, completely ignored the auto-dimming rearview mirror, bi-Xenon HID headlights and rain-sensing wipers as they went about their business automatically when required, chosen the appropriate Audi drive select mode from its Auto, Comfort and Dynamic menu via the ultra-user-friendly MMI infotainment interface so as to complement your mood, popped the shift lever to the right for Sport mode if Dynamic was your previous selection, and then set off to fully enjoy yourself while bringing a moment of happiness to the lives of others as they reactively smiled and sent thumbs up your way while passing by, then you just can’t imagine how far the S5 punches above its price class.

Certainly $70,700 is hardly chump change, even without factoring in the S5 Cab’s $2,095 freight and pre-delivery prep fee and the $890 needed for my tester’s sensational blue paint, while this particular example also added another $1,000 for the navigation package which included voice activation and HD radio as well, but considering the number of eyeballs the S5 Cab pulls while cruising through town and how wonderful it is to do so, plus how smooth yet solid it is on the highway and better yet, how brilliantly it locks to its lane through an undulating serpentine stretch of two-lane tarmac, its meaty 255/35ZR19 Dunlop SP Sport Maxx GT performance rubber on gorgeous 19-inch five parallel-spoke alloys biting into pavement all the more readily thanks to its standard S sport suspension, the supercharged V6 blatting out a raucous snarl with every paddle actuated shift, its soul satisfying acceleration pinning you further into the enveloping driver’s seat, its extended bolsters securing your lateral movement so immovably that you’re always perfectly bolted into position to make the most of each and every fleck of feedback fed through the suspension and electrically-powered precisely reactive steering wheel; yes, $70k-plus feels pretty inexpensive right about now.

Alternatively you can move up from Progressiv to Technik trim for $3,950 over base and get the navigation package standard, along with what I’m guessing is a very good Bang & Olufsen audio system, plus a rearview camera, front and rear parking sonar, adaptive headlights with cornering capability, Audi side assist lane change warning system, plus more, or opt for a number of additional worthwhile extras.

The S5 Cab would still be fabulous if it wasn’t also so practical, but the back seats actually fit medium-build adults, and the way the rear passenger compartment is all suited up with the same beautifully detailed soft-touch synthetics, leathers, carbon-fibre and metals makes it as pleasurable an experience as rear-seat 2+2 convertible riding gets.

Likewise the trunk is beautifully finished with top-grade carpets and rich chrome tie-down hooks, while sturdily made levers let you drop the 50/50-split rear seatbacks flat without having to push them down from the inside. To maximize the 289-litre (10.2-cubic feet) trunk’s spaciousness when the top is upright you need to push a separator upwards, an easy process that grows max volume to a level that’s obviously larger yet frustratingly unknown because Audi’s never given us a clue, and while such dividers aren’t unusual in the segment the way the S5’s works is, because when lowering the top from the driver’s seat the separator automatically drops downward if nothing’s in its way. I can’t count the number of times I’ve felt like a dweeb while jumping out of the driver’s seat and running around to the trunk in order to do something I should’ve remembered before climbing in, a process that’s both stupid and illegal if stopped at a red light and therefore requires the additional need to pull over somewhere to execute, but Audi makes such annoyances distant memories of the past. How I love good design.

While experiencing this for the first time was a particularly wonderful moment I won’t soon forget it would simply be wrong to end the review of such a spectacular car on a practical note, but isn’t it perfect that something so idyllically easy on the eyes, blissfully freeing on the road, and hedonistically sumptuous in creature comforts is also so downright useful? Thought you might agree. There are certainly faster more intensely dynamic performance cars for similar money, and yes some of the interior plastics are a bit suspect, but I can’t think of any four-seat convertible capable of delivering such a well-balanced combination of style, comfort and class that’s so rewarding to drive and utterly easy to live with. Truly, you owe it to yourself to own a car this good.
©(Copyright Canadian Auto Press)
Car Shopping Tools