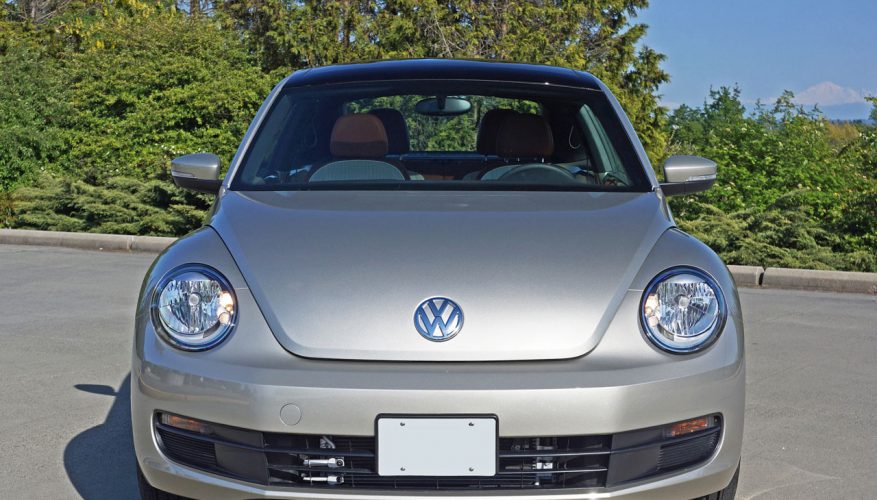 By: Trevor Hofmann
How do you feel when catching sight of the new VW Beetle Classic? If you’re getting up in years it’s quite possible you had one of the original air-cooled rear-engine Bugs in the family fleet when you were a kid, and therefore this wonderfully retro version of an already retrospective design just might just dig up some old memories as it stirs the inner emotions. It certainly does that for me.

I went just about everywhere riding in the little storage compartment behind the rear seats of my dad’s ’66 Beetle. That was the late ’60s and early ’70s, before safety regulations took most of the fun out of driving and being driven. While I loved lying back there and staring upwards as the trees and houses blurred past the raked rear window, I didn’t get that “seat” because I enjoyed special privilege over my brother and sister. Rather, I was the youngest and therefore able to climb up and over the rear seatbacks and then actually fit inside the 10-cubic-foot compartment, a necessity because there were only two spots available in the back seat. It was dad in the driver’s seat, mom next to him as the front passenger, my middle-child brother behind my dad and my sis, the oldest, behind my mom. The predetermined seating arrangement was purely practical; mine just happened to be the coolest vantage point.

If it existed back then I would’ve been in the lap of luxury in the current Beetle Classic’s 436-litre (15.4 cubic-foot) cargo area. No doubt my dad, bro and I would’ve folded those 50/50-split seatbacks flat to expose 846 litres (29.9 cubic feet) of maximum volume and then slept back there while camping, but as it was the old VeeDub’s front trunk didn’t make for very good lodgings, so we carried along a few fully-extendable chaise lounge chairs and a tarp for rainy nights.

Yes, the new Beetle Classic sure conjures up good memories. How I wish I could’ve shared it with my late dad during the beautiful spring week I enjoyed it earlier this year, as it would’ve brought a smile to his face too. Its Moonrock Silver Metallic was even relatively close to the beige colour of my dad’s Beetle, although it only got the metallic treatment after he personally repainted it (complete with a number of stylish drips) a ghastly bronze-gold colour that he later regretted. Comparatively my Beetle Classic’s paintwork was perfection, while its 17-inch Heritage alloy wheels with black-painted inner “spokes”, chromed rims and chrome hubcaps are lighter and more rigid than the old steel wheels of yore, but they don’t look all that different from what we had on our ’66. They came riding on 215/55R17 all-seasons, a lot larger and stickier than the hard-riding bias-ply rubber (that were more often than not retreads) we were happy to suffer through.

The contrast-stitched checkered beige and brown two-tone cloth and leatherette upholstery in the new car is much nicer than the black patterned vinyl in our old Bug too, as is everything else inside. As you might imagine, VW does the dash, door uppers and rear quarter windowsills in body-colour plastic, while stylish brown armrests add some splash to the otherwise black lower door panels and rear passenger walls. A brown leatherette centre armrest finishes off the look nicely, while cool brown stitching adds visual effect to the leather-wrapped steering wheel, shifter boot and handbrake lever. Chrome rings surround the primary instrument dials and additional satin-silver metallic detailing enhances the cabin yet further. As far as dramatic styling on a budget goes, the VW Beetle Classic takes the cake.

At only $21,990 plus $1,600 in freight and pre-delivery prep fees, the Beetle Classic is budget oriented for sure, the only factory options available being my tester’s $1,400 six-speed automatic gearbox with Tiptronic manual shift capability and Sport mode, which replaced the standard five-speed manual transmission, plus the powered tilt and slide panoramic sunroof overhead, also priced at $1,400.

Unlike dad’s ’66, which to its credit was a pretty impressive off-roader, the new 2015 Beetle is a serious on-pavement handler with a responsive hydraulic power-assisted rack and pinion steering system that delivers decent levels of feedback, and a fully independent suspension with MacPherson struts up front and a four-link setup with coil springs and telescopic shock absorbers in the rear, both ends benefiting further from stabilizer bars. The aforementioned four-wheel disc brakes provide strong stopping power too, while repeated application during aggressive driving results in less fade than most rivals.

You need good brakes and a capable suspension to manage everything the little 1.8-litre four puts down to the front wheels. The direct-injected and turbocharged mill churns out 170 horsepower and 184 lb-ft of torque for spirited acceleration, which as mentioned was complemented by VW’s quick-shifting six-speed automatic, while the Beetle’s five-cycle EnerGuide fuel economy rating of 9.9 L/100km city and 7.2 highway with the manual or 9.6 and 7.2 with the automatic makes it quite light on the wallet considering the powertrain’s performance, as long as you go equally light with the right foot. That its torque arrives early in the rev range at just 1,500 rpm makes for easy and relaxed takeoff without much input, thus reducing consumption, the familiar percolating air-cooled flat-four sound the engine makes during the process just icing on the cake for original Beetle fans.

The Beetle’s tall design allows for plenty of front row headroom, while leg, shoulder and hip room won’t be an issue for most body types either. The rear seats are roomier than you might expect too, my five-foot-eight medium build enjoying approximately two inches left above the head and the same ahead of my knees. As mentioned there’s no tiny storage compartment behind the rear seats, but of course I couldn’t climb up there let alone fit inside anymore anyway.

We didn’t have a lot of luxuries when I was growing up, and couldn’t have even imagined the long list of features that comes standard in this new Beetle Classic, let alone some of the fancier luxury models within Volkswagen’s lineup, but we were happy for the most part, and I was made a lot happier thanks to my dad’s ’66 Bug. That’s the car we went to all the Herbie, The Love Bug movies in (all except for Lindsay Lohan and Michael Keaton’s 2005 Herbie: Fully Loaded that is), the same car that took us on errands during the week and away (sometimes for hundreds of miles at a time) on weekends. We all loved it, and despite its humble economy car status, were proud of it.

I must admit that I felt good behind the wheel of the Beetle Classic too; all the thumbs up from passersby certainly didn’t hurt. Thanks Volkswagen, for all the great memories. The new Beetle Classic brought them all back in an instant.
©(Copyright Canadian Auto Press)
Car Shopping Tools