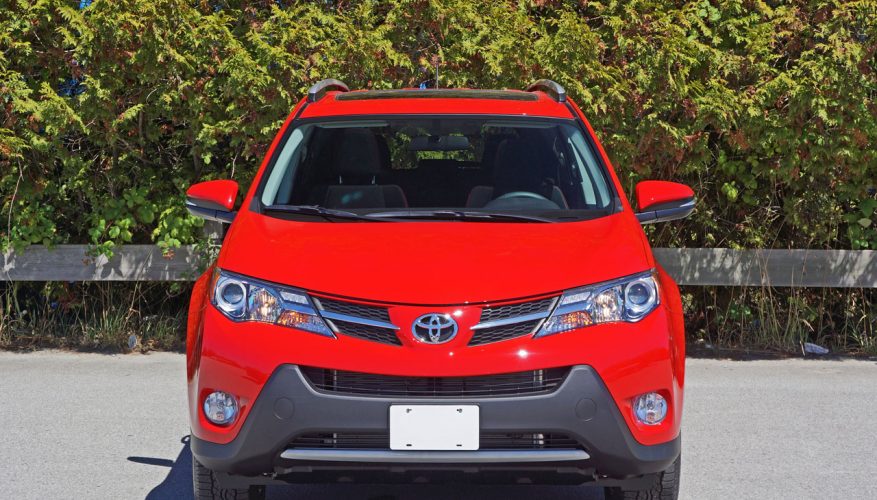 By: Trevor Hofmann
I was only two years old when Toyota launched its first car in Canada, and while 50 years sounds like a long time it certainly goes by quickly. That car wasn’t a RAV4, the popular crossover SUV having only come to market 21 years ago in 1994, but rather a number of JDM cars including the Corona, Crown, 700 UP10 (Publica) and the now legendary Land Cruiser, some of which didn’t necessarily fit our market-the Corolla, created for other markets in 1966, didn’t show up here until 1969.

The challenges Toyota and its fledgling dealers faced in 1965 were immense (my best friend’s dad bought a yellow Corona Mark II with gold vinyl seats in the late ’60s and we thought this was very unusual), but the rest, as the saying goes, is history. Now, with sales of Toyota branded vehicles at 179,324 units in Canada last year, a number that signifies steady growth towards its pre-market crash highs of 209,157 deliveries in 2008, not to mention an all-time high of 17,565 Lexus vehicles in 2014 and ever-ebbing Scion sales of 3,962 units (which will hopefully turn around with the new compact iM five-door coming soon), Toyota Canada’s overall success is worthy of considerable celebration. Hence the introduction of two very special models: the 2015 Toyota Corolla 50th Anniversary Special Edition and this 2015 RAV4 50th Anniversary Special Edition.

I’m not usually a big fan of red paint on SUVs, but the sleek lines of the RAV4 seem to accept the racy colour much better than most rivals, especially when the wheel cutouts are filled with such nice, large 18-inch machine finished alloys with sporty black painted pockets on meaty 235/55/R18 Bridgestone Dueler H/T 687 tires. The appropriately named “Absolutely Red” hue helps the CUV’s chrome embellishments and rugged matte black body cladding visually pop, this model even including silver roof rails that tie in nicely with a thin strip of chrome on the bottom edge of the greenhouse, and those aforementioned wheels. LED turn signals on the nicely styled side mirror housings further accentuate the XLE AWD model’s upscale mission, while the rear of the CUV makes due with a clear CHIMSL hidden under the rooftop spoiler plus clear backup lenses in taillights, the red portions almost invisible next to the red paintwork.

Along with the standard Absolutely Red paint (other colours are available just in case you don’t want to go too far with your patriotism) and 18-inch alloys it’s important to note that all RAV4 50th Anniversary Special Edition models are finished in well equipped XLE AWD trim, while some unique details include a leather-wrapped steering wheel with red stitching and a leather and metallic shift knob, plus a unique black interior with yet more red stitching across the leather-like padded dash bolster, around the cloth upholstered seats and down each side of the centre armrest. Even the primary gauge cluster gets the red treatment around it’s outer rim, and embroidered RAV4 emblems on the floor mats are done out in red, making this family hauler seem more like a sporty Scion FR-S inside than anything so domestic.

Domestic is a good word for the RAV4, but not merely because it makes such a good family vehicle. Toyota’s compact CUV has been produced in Woodstock, Ontario since 2008, making it more domestic than the Toluca, Mexico-built Dodge Journey, Louisville, Kentucky-produced Ford Escape, and Toledo, Ohio-made Jeep Cherokee, the RAV4 plant employing more than 8,000 Canadians. I literally drove over the site in a third-generation 2006 RAV4 as part of the light-duty 4×4 portion of that model’s official Canadian launch program, and while that model was a significant step up in size and civility over the previous version, this fourth-generation RAV4 is a decidedly different kind of crossover SUV.

Other than styling, which became sportier and less truck-like, the most obvious change was the elimination of its powerful V6 and removal of its side-swinging rear door, which never opened up on the proper side for curbside access in North American markets anyway. Instead, the spare tire was repositioned under the cargo floor and the rear door morphed into a liftgate, becoming much more user-friendly in the process.

While the more aerodynamic exterior certainly appealed to a new breed of crossover enthusiast, the RAV4’s interior moved up a solid notch in design and materials quality. A soft-touch synthetic dash pad was added to the left of the driver and ahead of the front passenger, covered in stitched leatherette in XLE and Limited trims, while high-quality woven fabric was added to the one-piece door panel insert/armrests and cool carbon-like patterned surfacing dressed up the surrounding window switch surfacing and lower console. Thanks to a creatively drawn metallic finished door pull, each door panel was transformed into a particularly impressive piece of modern art, whereas the rest of the interior became something a compact CUV driver could be truly proud of.

My tester’s red-stitched black cloth seats follow this newfound Toyota design trend, their inserts nicely detailed in a subtly stylish black striping, and fortunately they don’t deviate one iota from the longstanding Toyota tradition of comfort and support, all the better to enjoy the RAV4 on the road.

Unlike its predecessor the RAV4 is less about blistering straight-line performance and more about balancing acceleration with fuel economy. This said the powerful V6 offered in the old model was optional, with the majority of RAV4 buyers opting for the standard inline-four, so therefore most fourth-generation RAV4 buyers are enjoying a better performing and much more efficient upgraded four-cylinder. That 16-valve, DOHC 2.5-litre four-cylinder, complete with dual variable valve timing with intelligence (VVT-i), makes 176 horsepower and 172 lb-ft of torque, which, thanks in part to a manual-mode infused six-speed automatic transmission that delivers quick, smooth shifts, results in more than adequate performance off the line as well as generous passing power on the highway.

At higher speeds on loose road surfaces like gravel or slippery stretches of pavement the RAV’s AWD system employs an electronically controlled coupling mounted ahead of the rear differential that apportions torque rearward when the coupling in back starts to slip, and while this is similar to how the old RAV4 sent torque back and forth between its axles, the new AWD system’s transfer-rate is much faster and also takes into account additional information sent by the engine, transaxle, and electronic power steering system, making it more intelligent overall. Additionally, the AWD system’s standard Sport mode, activated via a button on the centre stack, presets the Dynamic Torque Control parameters for quicker response and yet better handling by transferring 10-percent of available torque to the rear as the CUV turns into a corner, and furthermore sends up to 50-percent of available twist to the back axle to help rotate the RAV through the corner while mitigating understeer (when the front end tries to break traction and push outward). Sport mode also reduces steering assist, sharpens throttle response, and makes the stability control system slightly less intrusive. The end result is an AWD compact CUV that handles better than the already agile front-drive version, not to mention many of its competitors, while adding a new level of confidence to its owner. All of this is augmented by standard traction control and vehicle stability control, as well as ABS-enhanced four-wheel disc brakes with electronic brake-force distribution (EBD) and emergency brake assist (BA).

Even without AWD the latest RAV4 is a better handler, whether sneaking it into a tight parking spot, stealthily negotiating congested city traffic, traveling at high speeds on the freeway or slotting it into fast-paced twisting turns on a curving back road it’s by far more capable, and the 18s on my tester only improved its overall athleticism. Then again, while I have yet to take it off-road I’m willing to guess it won’t quite be up to the level of soft-road activity the old RAV was capable of due to a 31-mm (1.2-inch) reduction in ground clearance from 190 mm (7.5 inches) to 159 mm (6.2 inches).

Its mostly larger dimensions make for a roomier interior, both in the passenger compartment that’s amply accommodating for five adults, and in cargo space that’s now good for 1,090 litres (38.5 cubic feet) behind its 60/40-split rear seatbacks and 2,080 litres (73.4 cubic feet) when dropped flat into the floor. This last number might only result in a mere 6.0 litres (0.2 cubic feet) of added maximum cargo volume over the old RAV4, but more importantly the new model is 75 litres (2.6 cubic feet) more useful when the rear seats are in use.

The rear seats are easy to lower too, first requiring the headrests to be flipped downward, and then the simple process of tugging on a seat-side lever to lay them flat. Toyota provides a couple of carpeted floor extensions to cover the gap that would otherwise be left for small items to fall into, but the way they were engineered causes another problem. The back half of these rigid extensions is connected to a small carpeted lid that covers a shallow, narrow storage bin under the cargo floor, and the latter wouldn’t lay flat no matter how many times I tried, an issue that would likely iron out over time.

One thing Toyota doesn’t need to change with the RAV4 is its generous helping of standard and optional features. As mentioned, my tester was suited up in XLE AWD trim, which means that it included most of the features offered in the $24,365 base LE model such as tilt and telescopic steering, air conditioning, steering wheel controls for Bluetooth hands-free phone connectivity, cruise control, a trip computer, and redundant control of the AM/FM/CD/MP3/WMA audio system with auxiliary and USB inputs, plus dual power-adjustable and heated side mirrors with integrated turn signals, powered windows, power door locks with keyless entry, a handy assortment of secondary instruments such as an eco drive monitor and an exterior temperature gauge, as well as map and cargo lamps and a fold-down centre armrest with storage for the rear seat.

Additionally the XLE gets everything from the LE’s $1,700 Upgrade package including a six-speaker enhanced audio system featuring a 6.1-inch full-colour touchscreen infotainment interface, plus voice recognition and an integrated backup camera, as well as heated front seats, a tonneau cover, rear privacy glass and silver-coloured roof rails.

Standard RAV4 safety features not already mentioned include Smart Stop Technology (SST), which cuts power to the engine during panic braking, and a class-leading assortment of standard airbags including one for the driver’s knees.

At least as important to the RAV4’s target demographic is an excellent five-cycle EnerGuide fuel economy rating of 8.7 L/100km city, 6.4 highway and 7.7 combined in FWD guise or 9.1, 6.8 and 8.1 with as-tested AWD. As good as these numbers are Toyota will introduce a RAV4 Hybrid for 2016 that’s sure to make the compact SUV even more appealing to those looking to pocket more pump savings while reducing their carbon footprint.

Back to 2015, the RAV4 50th Anniversary Special Edition is a very nicely packaged version of what has become one of Canada’s most popular compact crossover SUVs, and certainly a worthy partner to the best-selling Corolla for celebrating Toyota’s momentous 50-year milestone.