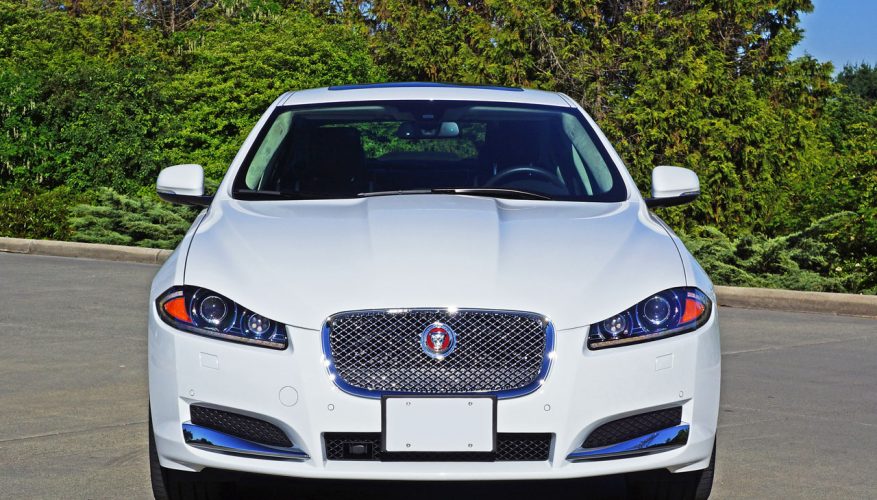 By: Trevor Hofmann
Think XJ, only smaller. This is the basic theme most premium manufacturers use when building more affordable mid-sized models, and it almost always works. With the XF, the results are near breathtaking.

Few cars deliver wow factor like the XF. In order to pull eyeballs the stylish feline incorporates a smaller version of the XJ’s rectangular chromed grille with growling cat at centre, a nearly identical set of organically shaped headlights permeated with LEDs, an attractive lower valance boasting a large rectangular vent at centre and more curvaceous chrome adorned openings for feeding the brakes at each corner, while around the side a gorgeous set of 19-inch 10-spoke alloys on 245/4519 ContiProContacts immediately steal the limelight, followed up by a large protruding vertical engine vent just aft of the front wheel cutouts, complete with a chromed Jaguar finisher up top, while the XF’s rear styling might be its best vantage point thanks to a positively gorgeous set of clear and red lensed tail lamps that curve completely around the rear quarters before melding into a thick strip of metal brightwork that spans the trunk lid. A large iconic leaper leaps above, bold Jaguar lettering in between, plus the model designation to the left with the engine size to the right, all above a matte black diffuser-style rear bumper cap housing twin chromed tailpipes at each corner. I don’t know about you, but nothing’s as classy as a Jaguar, at least within it’s reasonably priced mid-size segment.

No wonder the XF sells so well compared to many of its forgotten middle-child competitors. Of course Mercedes’ E-Class, BMW’s 5 Series, Audi’s A6 leave it far behind on the Canadian sales charts, as do the new mid-sized Cadillac CTS and electrically-powered Tesla Model S, but the XF powers right past all of the Japanese entries including the Lexus GS, Acura RLX and Infiniti Q70, while Lincoln’s poor selling MKS and Volvo’s downright dismal S80 sales are a bit too large and too geriatric to fully qualify. Sorry, I only bring up those last two as a half-hearted attempt to pay respects to the dying and the dead, but the tarted up Taurus hardly deserves to be on this list when compared to any of the Germans, Japanese or other domestics. Hell, even the Hyundai Genesis is a more worthy contender, a car that does significantly more volume than Audi’s A6, incidentally, and would therefore qualify in third place on this list if the Korean brand’s nameplate had enough sex appeal, but I digress.

Sex appeal oozes from each mesh-covered vent and every thinly spaced gap of the XF’s sinfully graceful body, and that’s even before sliding inside. To do so you’ll first need to press one of four proximity-sensing door handle-mounted black rubber buttons, the only un-sexy features on the car as they look like they’re pulled from a Kia rather than anything in the premium segment, although the last Optima I tested had chrome detailing on the door handles and buttons that looked much better than these. Fortunately the XF’s work effectively and the end result is oh-so worth it.

Once inside, the XF is the epitome of upper crust decadence thanks to impressive details like its leather-wrapped and white contrast stitched door uppers and dash top, a Meridian surround sound centre speaker protruding out from the middle of the latter. Soft and supple suede-like cloth roof pillars push upward into the same suede cloth roofliner, not to mention suede covered visors, completing a plush experience that none of its rivals even come close to let alone match. Likewise, the instrument panel’s front surfacing is done out in beautiful “knurled” aluminum that wraps halfway around the door panels, while an elegant strip of satin rosewood follows just underneath, visually lining up with a thicker slab of the same hardwood on each door panel, which butts up against a black leather grab handle and armrest. More hardwood and aluminum covers the centre stack and lower console surfaces, while all of the switchgear is nicely finished, some surrounded in chrome with others detailed in satin aluminum. The buttons themselves are rubberized for a high quality feel and useful grip, plus most are tight fitting and well damped, accepting three on the lower console, specifically the ones for stability control off, the checkered flag Sport mode, and the ASL button which were all quite wiggly, but nothing worse than in an Audi A6.

Most of the wood feels real, which is a good thing because it is, although the wood atop the lower console, particularly covering the ashtray and cupholder bins didn’t feel very high in quality because the lids it gets fused to is made from a cheap hollow feeling plastic. This is unbecoming of Jaguar. Much more fitting is the soft release felt-lined glove box that’s covered with a padded leather-like material, in sharp contrast to the aforementioned Audi A6 that gets a cheap hard plastic glove box lid. This same soft-touch synthetic is used to cover the lower portion of the dash, lower door panels and lower console side panels. It’s a very nice treatment, and as noted is much better than some others in the class.

When you get inside no vents are immediately visible, but upon ignition four rectangular covers rotate upwards to expose the vents beneath, an unnecessary yet elegant display of opulence that really gives the car a sense of occasion. If this doesn’t impress I’m sure the rotating JaguarDrive gear selector dial rising up out of the lower console will. This is the most efficient gear selector type on the market and being that Jaguar has added standard paddles to the steering column, plus a very engaging Sport mode, you likely won’t miss shifting an old-style lever with your right hand.

With hands on the steering wheel and fingers at each paddle you’ll no doubt notice that Jaguar forgoes the full TFT instrumentation setup used in the XJ, instead using traditional analog dials. The left gauge is for the speedometer and right for a tachometer, the two centered by a sizable LCD display showing gear selection, exterior temperature, a digitized version of an analog clock, trip and overall mileage odometers, and a fuel gauge. Additional information can be selected via steering wheel controls.

The infotainment screen on the centre stack is somewhat small and the resolution not as clear as some in this class, but everything you need is packed within if not in as user-friendly an arrangement as some others, or particularly quick response to touchscreen selection. The aforementioned Meridian surround sound system is beyond excellent, however, with 17 speakers and 825 watts to its credit, and I appreciated having a real CD player for those occasions when I wanted to enjoy my music collection with the best possible sound (something MP3s can’t do). Yes one day when I have an SD card larger than a hundred and twenty eight gigs in my smartphone I’ll replace all my MP3s with FLAC files, but until then I’ll rely on CDs for better in-car audio.

This particular XF 3.0 AWD model didn’t have all the features I experienced in my recent XJ loaner or other vehicles tested within the midsize premium class, such as ventilated seats, heatable rear seats, a panoramic sunroof, and the list goes on, but as mentioned it took care of luxury accoutrements very well nonetheless, with a sporty side that really stood out. For instance, the supple Warm Charcoal coloured leather seats incorporated ivory leather striping that reminded me of some fashionable leather bomber jackets in the same colour scheme – I really like the look.

As the name implies a 3.0-litre V6 is under hood, although there’s no SC badging indicating the supercharger that gives this engine its superb performance. With 340 horsepower and 332 lb-ft of torque that’s made even more responsive due to an eight-speed Quickshift automatic transmission with paddle-shift actuated manual mode and all-wheel drive featuring active power-transfer technology and a rear-wheel bias in dry conditions, acceleration off the line is strong and highway passing power excellent, not to mention it’s all accompanied by a nice growl when pushed hard. It really loves to stretch its legs, fitting for a brand named after one of the most agile creatures on earth. Rotate the gear selector all the way to the rightmost S position for sport mode, press the checkered flag on the lower console to engage the adaptive suspension’s most aggressive setting, and get ready to rumba. Yep, this cat can dance. I wish I had a copy of Scatman Crothers’ Ev’rybody wants to be a cat on my Note 4 as it would’ve been ideal background music to enjoy while the XF was cutting the rug, but as it was I listened to Ima Robot’s Greenback Boogie while paying high-speed homage to this new-age Aristocat, a perfectly fitting veneration to the one-percent’s tastefully suited excess.

Yet despite its style, resplendent luxury and go-fast goodness the XF isn’t a one-percent car at all, but rather a very affordable mid-size model that barely breaks a middle-income earner’s bankroll at $53,500, plus up to $2,470 in freight and pre-delivery prep fees. That would be the 240 horsepower 2.0-litre turbocharged model, whereas this supercharged 3.0 AWD starts at $61,500, about where the pricier Germans begin. With the 340 horsepower V6, acceleration leaps from a modest 7.9-second standstill to 100km/h sprint to a more Jaguar-like 6.4, while features get stacked on commensurately.

My tester included one upgrade, the $2,500 Convenience Pack that adds proximity-sensing keyless access, auto-dimming side mirrors, automatic high beam assist, a powered rear sunshade and blind spot monitoring, all of which made for a very nicely outfitted luxury ride, but the extremely high $2,300 cost of adding what is otherwise very common adaptive cruise control and complete lack of additional electronic driving aids, not to mention the less than ideal digital display systems, shows the current XF’s age. The good news is a new 2016 XF hits the road soon, and likely will remedy such problems.

Also on the positive, Jaguar included a very up-to-date automatic idle stop/start system with my tester to help save on fuel, the result being a five-cycle EnerGuide rating of 13.1 L/100km in the city, 7.7 in the city and 11.2 combined, not bad for such a powerful, well equipped and hefty 1,880-kilo (4,145-lb) mid-size luxury car.

If fuel economy is the least of your mobility issues and all-out performance more important, I recommend moving up to the $88,500 XFR or $104,500 XFR-S models that cram 470 or 510 horsepower supercharged V8s into the XF’s engine bay for seriously silly levels of get up and go. I’ve tested the former and can attest to its overall performance prowess and have witnessed the latter approaching quickly from behind before blurring past in its exclusive Ultra-Blue paint scheme and can only imagine how brilliant it is to pilot.

Of course, being more practical I can also recommend the 3.0 AWD I tested, as it balances performance and resplendent luxury with a more accessible price point, while looking mighty fine doing so. In fact, put it beside most mid-size premium competitors and it’ll leave them looking downright dowdy in comparison, the Jaguar eliciting stares when passing by and generous compliments when sitting still. I hope you can handle all the attention.
©(Copyright Canadian Auto Press)
Car Shopping Tools