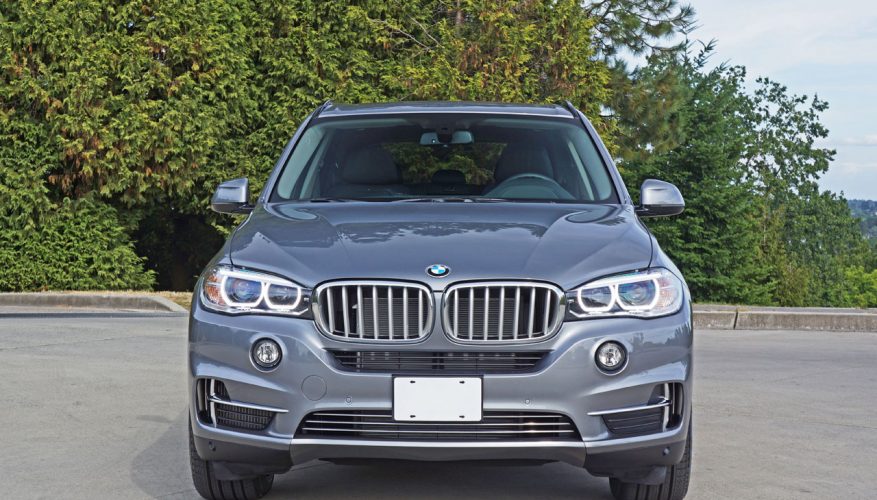 By: Trevor Hofmann
The X5 hasn’t changed since I reviewed it last year, which is a very good thing as far as I’m concerned. Its completely reworked frontal design with its beefier twin kidney grille, larger more unique 3 Series-inspired headlamp clusters and cleaner, uncluttered lower valance still looks fresh and particularly attractive, while its athletic profile appears longer and leaner thanks to matte black rocker cladding with unique body-colour inserts that visually thins out the design from front to back. Beautiful multi-spoke 19-inch alloys shod in Pirelli Scorpion rubber were fitted to my tester, only upstaged by large functional engine vents just behind the front wheel cutouts. A tastefully applied rooftop spoiler leads into stylish rear quarters highlighted by a classic set of LED-enhanced L-shaped taillights hovering above a nicely sculpted two-tone body-colour and black bumper cap bisected by a thin strip of chrome brightwork and rectangular chrome exhaust tips. I loved the X5 last year when the new design debuted and my feelings haven’t faded. It’s a great looking premium CUV that’s arguably most attractive in its segment.

If sharp styling was all BMW had to offer mid-size crossover SUV buyers they may still have a top-seller on their hands, but its success has at least as much to do with its many other attributes. Nicer interior detailing than most rivals, for one. You’ve heard me talk about soft-touch synthetics a lot, and I keep bringing up this issue because it’s one quality that separates the lower class volume automakers from real premium players like this X5, but I must admit that many of today’s mainstream mass marketers are doing a better job of delivering upscale pliable plastics than the premium brands. Not so with BMW, however, its interiors most impressive throughout the majority of segments. As you likely already know, the X5 is BMW’s flagship crossover SUV, so it makes sense that the powers that be in München haven’t held back when it comes to quality. Soft-touch plastics are almost everywhere that isn’t already covered with gorgeous woods, genuine metals and leather, except the very lowest portions of the instrument panel, below the knees. The hardwood and brushed metal trim I just mentioned graces the instrument panel, lower console and doors, the latter benefiting from nicely padded and stitched leather insert trim. Likewise for all three front armrests and those in the rear.

As you might expect in a luxury brand with a performance pedigree the X5’s steering wheel is an impressive piece of equipment, with beautifully finished leather and a shapely design that’s been optimized for 9 and 3 o’clock hand positioning, while the switchgear on its spokes is as good as this class gets. Ditto for the buttons, knobs and switches throughout the rest of the cabin, which are made from higher quality plastics and metal than its competition (read not hollow and cheap feeling), nicely weighted, tightly fit together with minimal spacing, and almost zero side-to-side wiggle.

The pièce de résistance is BMW’s trademark digitally infused aluminum shift lever, while the rotating iDrive controller placed right beside isn’t too shabby either, the high-resolution full-colour graphics of the infotainment system it connects through to being pure eye-candy. Really, look high, low and even under lids, almost every control or surface inside the BMW X5 will impress, with the only suspect bit of workmanship being the sliding roll-top cover that hides the twin cupholders and ashtray ahead of the shifter, the plastic used a bit less upscale than everything else in the cabin. And yes, call me picky if you like, but when an automaker builds an interior this good it forces a critic like me to dig a little deeper to find fault.

I can’t criticize the seats, however, as they don’t come much better than those in the first row of the X5, their level of comfort superb and overall support appreciated when hurling this SUV through the corners. Yes, in case you’re still under the impression that sport utilities don’t handle curves as well as sport sedans, let me bring you up to speed. The X5 changed such rules when it was introduced 16 years ago in 1999, and each successive upgrade has endowed it with even better road-holding, the latest 2015 X5 xDrive50i tested here every bit as competent when pushed hard as most competitors’ sport-luxury sedans. Put it up against a similarly optioned 5 Series and the lower and lighter four-door will edge out the X5, mind you, but the comparison isn’t fair being that the 5 is considerably more athletic than the majority of its rivals. All in all, most X5 owners won’t be able to utilize all of its ability through the corners no matter how hard they push, and if they get in over their head and feel like they’re about to lose control, all they need to do is keep steering in the direction they want to go and the X5 will pull them through more often than not. It’s that good.

Of course, it’s easier to get in over your head if you’ve got ridiculous amounts of power, and the xDrive50i’s 4.4-litre V8 is a great deal more capable than the xDrive35i that I drove last year. I’m going to guess BMW sells a lot more six-cylinder X5s than V8s, as the 300 horsepower 35i offers plenty of get up and go with the ability to sprint to 100km/h in a mere 6.6 seconds, not to mention deliver better fuel economy. The 50i’s performance is breathtaking, however, its twin-turbocharged eight pushing out 445 horsepower and 479 lb-ft of torque for a 5.3-second sprint to 100km/h, a full 1.3 seconds quicker to 100km/h than the 35i, making the hefty ute feel lighter and more athletic in comparison, not to mention a great deal more enthusiastic than most challengers. You pay at the pump, as I mentioned a moment ago, but this won’t likely be an issue with those stepping up to the more powerful engine, such having already chosen performance over the lively yet more frugal 35i, or for that matter the fuel-sipping clean diesel-powered xDrive35d.

For comparisons sake the revised five-cycle EnerGuide numbers read 11.1 L/100km combined city/highway for the xDrive35i, 13.8 for the for the as-tested xDrive50i, and 8.7 for the xDrive35d. Yes, the difference between the gasoline powered X5s is nominal, the more powerful V8 able to maintain a more relaxed low-rev state to keep the 2,336-kilo (5,150-lb) CUV abreast with surrounding traffic compared to the higher revving six, although both vehicles’ state of the art eight-speed automatic is able to shift often enough to keep the engine at its optimal rpm to either minimize fuel usage or maximize performance, while the new X5 is lighter than its predecessor thanks to more aluminum, high-strength steels and other lightweight yet strong materials, so it makes better use of the power it has.

This ability to minimize fuel usage or maximize performance is really what separates the X5 and all new BMWs from the majority of competitors, a bit of a Jekyll and Hyde personality in each and every model the manufacturer builds. When the driver selectable settings are set to Eco Pro mode the 50i simply saunters its way down the road with a sort of nonchalant indifference, its engine shutting off at stoplights and automatically restarting when ready to resume, regenerative brakes silently going about their business replenishing the electrical system as if it was a hybrid, and other EfficientDynamics technologies adding to the SUV’s evergreening character, but switch that console-mounted toggle to Sport mode and it takes on the role of fire-breathing Drogon, albeit a great deal more controllable than the largest of Daenerys Targaryen’s fearsome threesome. The sound of exhaust is soul stirring, and that’s only at idle. Press the throttle deep into the floorboard and it responds with an even more satisfying roar immediately followed by neck-snapping acceleration, the eight-speed rapidly firing through its gears as no end to its forward momentum appears immanent, or at least no road anywhere near where I tested it was long enough to find out. Flick the steering wheel to change lanes and you’re there without a moment’s hesitation, while fast-paced S curves are child’s play for this Bavarian-born, American-made high-speed cruiser.

Truly, the way the X5 drives makes it hard to believe this is BMW’s answer to family duty, but it serves practical purposes as adeptly as it proves racetrack ready, hauling five comfortably in as-tested trim or seven if optioned out with a third row. But make sure you want the extra row before you purchase because the five-seater comes with a massive well of hidden stowage under the cargo floor, particularly good for hiding valuables away from the smash and grab crooks that proliferate most large cities. Either way you’ll find plenty of luggage space behind its ultimately convenient 40/20/40 split-folding second row, while unorthodox yet ultimately utile clamshell-style cargo bay access features a small pickup truck style tailgate that drops down to form a loading shelf just like station wagons of yore, plus a more conventional upper liftgate. It’s an ideal combination.

As you may have guessed the X5 doesn’t come cheaply in any of its trims, the xDrive35i starting at $65,500 plus $2,095 for freight and pre-delivery prep, the xDrive35d hitting the road at $67,000, and the xDrive50i I tested starting at $77,700, but I must stress you get what you pay for. First off you’re paying for the inherent goodness of its design, from styling to interior quality and road manners, while the X5 is hardly short on standard features either. A short list for the 50i includes automatic on/off HID headlamps with signature LED Corona rings and adaptive cornering capability, automated self-closing doors, an auto-dimming rearview mirror, heatable powered front seats with driver’s side memory, leather upholstery, dual-zone automatic climate control, a high-resolution full-colour multifunction display, iDrive infotainment with a rearview camera, navigation and BMW telematics, front and rear parking sonar, a panoramic sunroof, a powered liftgate, and much more.

Alpine White is the only non-metallic shade or colour, although BMW doesn’t charge a nickel to upgrade to any of its nine metallic hues, or for that matter swap between 19-inch wheels, my tester’s part of Luxury Line trim, a no-cost option that also adds more exterior chrome and glossy black roof rails. Moving up to either of two 20-inch rims will add an extra $1,200 to the bill, one of which is a stylish set of high-gloss black alloys. BMW also gives you the choice of five no-cost optional leather interior schemes, three different types of beautifully finished hardwood or aluminum trim, and five package options.

My tester included the $4,500 Premium package that features proximity-sensing Comfort access to go along with its standard pushbutton ignition, a head-up display system, a Surround View monitor, four-zone automatic climate control, front Comfort seats with powered lumbar support, a sensational sounding Harmon/Kardon surround audio system upgrade with satellite radio, heatable rear outboard seats, and manual rear window sunshades, while you also have the option of spending $4,900 more for a 16-speaker, 1,200-watt Bang & Olufsen audio system that’s out of this world. Additionally, you can add a number of useful electronic driving aids for $1,500, LED headlights with auto high beam and LED fog lamps for $2,500, the aforementioned third row of seats for $2,100, and the list goes on.

Of course BMW would be happy if you optioned out your X5 with these features and more, but even my comparatively prudently upgraded xDrive50i was resplendent to say the least, delivering a level of luxury, build quality and performance its competitors don’t fully live up to. If it were my money on the line it would be an X5 in the driveway, but don’t only take my word for it, experience one for yourself. I’m quite certain it will fulfill expectations and then some.
©(Copyright Canadian Auto Press)
Car Shopping Tools