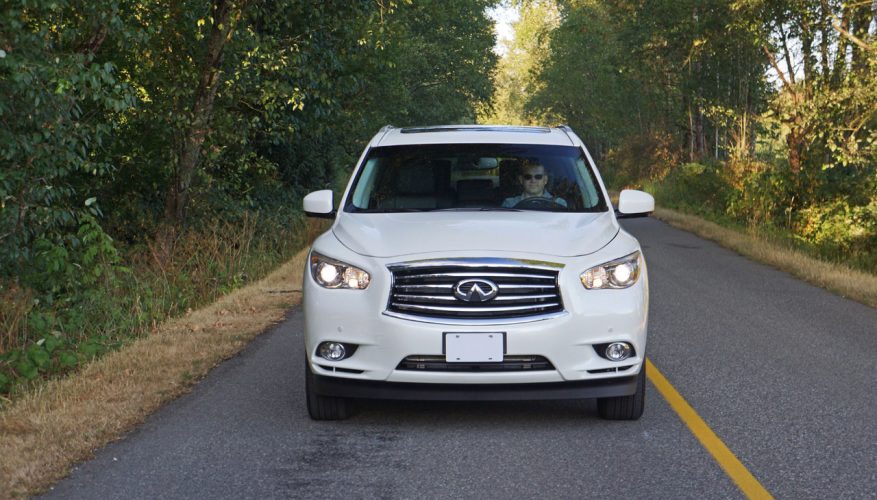 By: Trevor Hofmann
The QX60 hasn’t changed one iota since it’s JX35 inception three years ago, other than the badges, which means it continues forward as a very good looking large crossover SUV.

The model was one of the first to adopt Infiniti’s more curvaceous and distinctive new trademark grille design that looks just as good fronting SUVs as it does sport sedans, on this model flanked by reptilian eye-like headlamp clusters that seem like they’re staring you down even from the side view. No matter the trim level a nicely detailed lower fascia incorporates circular fog lamps with chrome bezels that imitate the 18-inch painted silver 10-spoke alloy wheels shod with 235/65R18 Michelin Latitude all-seasons at each corner. Thick chrome protective mouldings stretch down each side while chrome frames the side windows too, the rear quarter windows’ shapely squiggle adding to the stylish CUV’s overall elegance. Narrow wraparound taillights are near mirror images of the headlamps up front, giving the SUV a wide appearance when viewed from the rear. A rooftop spoiler adds some sporty flair and chrome garnish on the tailgate ups the elegance quotient. No matter the angle the QX60 is a great looking crossover SUV. Small wonder it sells so well.

Of course there’s a lot more to its sales success than just styling. The QX60 also represents superb value. Consider for a moment that a number of compact CUVs from the mainstream volume-branded sector cross the $40k threshold when loaded with features, whereas the sky’s the limit for most premium-branded compact models. Move up to the mid-size luxury class and prices start in the low $50s to mid-$60s and then soar ever higher as features are added on. Even Buick’s Enclave, which is nowhere near as premium in quality as the QX60 due to lower end plastics, hollow feeling fake wood trim, and a noticeable lack of standard and optional features will set you back more than $48k before freight and fees, whereas the premium-badged Infiniti QX60 starts at only $43,400 plus $1,995 for freight and pre-delivery prep. My tester came with Infiniti’s Intelligent AWD, which added $2,500 to the bottom line for a staring price of $45,000, which is still much more agreeable than average for this class, and even in this most basic form it’s hardly a starkly equipped family hauler.

Family in mind it boasts seven standard seats, unlike many in this class that only offer five to start with and some that still can’t be upgraded to seven. Infiniti improves on its seating flexibility further by including a second-row seat design that not only gets totally out of the way when third row passengers are on their way rearward, but does so even when a front-facing child safety seat is locked into its second-row position, without child of course. No other vehicle in the class offers this level of convenience, but rather all first require the child seat’s removal before letting passengers into the rearmost seats. And those seats are pretty comfortable as far as third rows go, with reasonable room for average sized adults and plenty of space for kids.

The usual premium touches can be found throughout the QX60’s cabin, such as fabric wrapped pillars that are also padded, soft-touch synthetic surfaces across the leading edge of the dash top, down the instrument panel facing and glove box door, across the top edges of the lower console, and of course along each door upper, while hard plastics can be found closer to the windshield on the upper dash, below the instrument panel where the knees reside, on the lower door panels, around the doorsills and lower B- and C-pillars. Most of this is par for the course in the luxury segment, with some brands including pliable surfacing in areas the Infiniti doesn’t, and vice versa. Along with these refinements the QX60 also includes beautifully layered high-gloss lacquered Kasane Washi trim or equally gorgeous optional maple, plus lovely metal accents and standard leather upholstery, while all of the switchgear is not only very well made with excellent quality materials, almost zero side-to-side wiggle and proper damping for a high-end feel, but it’s a far cry better than Audi’s Q7 or Porsche’s latest Cayenne, let alone that Buick Enclave spoken of a moment ago.

To get an idea of the QX60’s value proposition you’ll need to compare it with premium mid-size CUVs from other makers that don’t dress their base models up with anywhere near the same level of features while also charging the much higher prices mentioned earlier. Of course all this would be moot fodder if Infiniti didn’t back up the QX60 with a drivetrain and suspension system capable of measuring up with the Schmidts and Joneses, not to mention the Johanssons (Volvo is on the way back from near extinction with a new XC90) and Japanese-brand competitive Satos and Takahashis. Therefore Nissan/Infiniti’s award winning 24-valve, DOHC VQ series V6 is under hood, measuring 3.5 litres in displacement, featuring microfinished camshafts, continuously variable valve timing and tuned to make 265 horsepower and 248 lb-ft of torque, not the highest output offered in its segment but more than ample for its family-oriented purpose.

Family yes, but the QX60 is an Infiniti and the brand does have a sportier than average image to uphold, therefore this model gets a driver selectable Sport mode that remaps the continuously variable transmission to provide behaviour that mimics a conventional automatic, boasting defined shift increments than can be manually actuated via the shift lever for a wholly more engaging experience. When dialed to the selector’s rightmost position the QX60 responds wonderfully by revving the engine higher than it would otherwise do if left to its own devices in Normal or Eco modes, this process emitting a pronounced rasp from the V6 that, let’s remember, is basically a slightly smaller and detuned version of the Q50 and Q60 sport models’ 3.7-litre VQ engine. It holds its given “gear” through corners too, adept handling something else the QX60 does very well for a large seven-passenger CUV.

It doesn’t manage curves as sport sedan-like as experienced with the brand’s smaller QX50 and fabulous five-seat QX70, but it’s plenty capable when thrown into a sharp turn, if not flickably fun, although my tester didn’t include active trace control that improves cornering ability by applying brake pressure to a given wheel in order to bring the chosen direction in-line with the vehicle’s actual trajectory, or for that matter optional 20-inch wheels and tires. With or without these upgrades the QX60’s ride, whether Sport mode is turned on or not, is excellent and composure on the highway confidence inspiring to say the least, while it can compete with the industry’s best for cabin quietness and a feeling of overall refinement. The seats of my tester were wonderfully comfortable and supportive enough for the vehicle’s mission, but during the hot summer weather we experienced while testing I certainly would have enjoyed stepping up to a higher equipment level to access ventilated front seats.

Add the $3,500 Technology package and all three previous packages will be included, although the $2,500 price of the Driver’s Assistance package is absorbed and therefore all items only push the price up by $14,000 to a fully loaded total of $59,900. Again, this top-tier model’s maximum MSRP doesn’t even come near a fully loaded yet less equipped Buick Enclave, let alone most of its premium peers that don’t even start at such a reasonable price, while upping the content list to include Blind Spot Intervention (BSI), Lane Departure Warning (LDW), Lane Departure Prevention (LDP), and front seat pre-crash seatbelts.

It’s certainly not hard to appreciate why the QX60 is Infiniti’s second-bestselling model, behind the Q50 sport-luxury sedan. Infiniti doesn’t even charge you for metallic paint, an additional $900 with some German brands. All things considering it should be the bestselling premium mid-size crossover period, but Infiniti still struggles to get noticed on peoples’ consumer radar and therefore, while it handily beats the Audi Q7, Lincoln MKT, Mercedes-Benz GL and Volvo XC90 on the sales charts (and will likely outsell Land Rover’s new Discovery Sport that went on sale in May, too), it isn’t quite as popular as Acura’s MDX or BMW’s X5. Of note, the Q7, X5 and new Discovery Sport offer five-occupant base versions, whereas Cadillac, Lexus and Porsche don’t even offer seven-passenger CUVs.

Along with the QX60’s excellent initial value are low running costs. Of course its well-rated four-year or 80,000 km comprehensive warranty and five-year or 100,000 km powertrain warranty helps in this regard, although it may not be needed very often as Infiniti ranked highest amongst its premium competitors in the latest JD Power and Associates Initial Quality Study, only upstaged by Porsche that doesn’t directly compete as mentioned, and Jaguar that doesn’t build an SUV at all (yet). To achieve this ranking it beat BMW, Lincoln, Lexus and Mercedes-Benz, not to mention Audi, Volvo, Cadillac, Acura, and Land Rover, the latter grouping all ranking below average. Infiniti is also rated above average in JD Powers’ Vehicle Dependability Study, which ranks vehicles after three years of ownership.

More immediately your wallet should appreciate the QX60’s five-cycle EnerGuide fuel economy rating of 10.9 L/100km city, 7.6 highway and 10.5 combined. Alternatively to the conventionally powered QX60 you can opt for the QX60 Hybrid, a good choice if rack up a lot of miles in urban settings as its 7.8 L/100km city rating makes it the stingiest city slicker in the seven-passenger class, whereas its 6.9 highway and 7.6 combined ratings aren’t too shabby either.

As you should now be able to appreciate, there’s a lot to like about the 2015 Infiniti QX60. From styling, performance, build quality and features to functionality, fuel economy, reliability and safety, it’s a mid-size seven-passenger class winner that deserves your attention.
©(Copyright Canadian Auto Press)
Car Shopping Tools