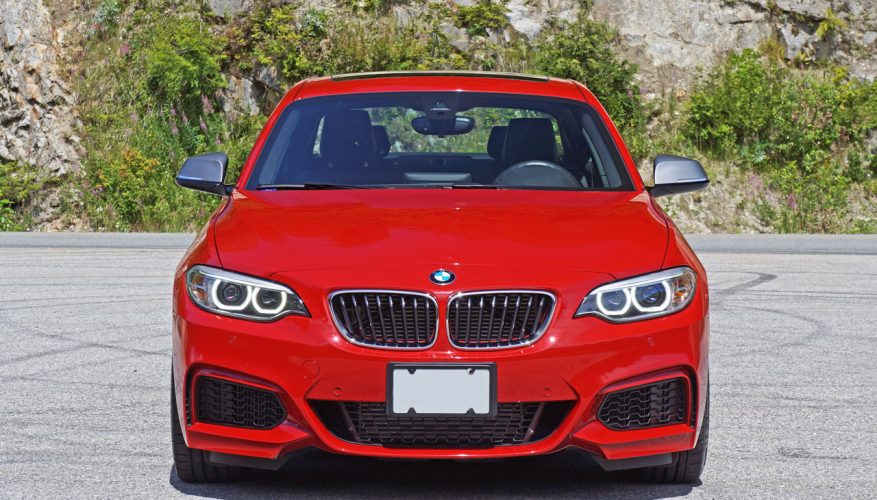 By: Trevor Hofmann
I could never forget the first M3 I drove. No, not the original E30 M3 that I’ve unfortunately never set foot in, but rather one of the 45 numbered Euro-spec E36 M3 coupes BMW Canada imported for the 1994 model year, two years before the dumbed-down North American-spec 1997 E36 M3 arrived. The former had a high-revving 282 horsepower 3.0-litre inline-six connecting through to a five-speed manual transmission that was a dream to shift. The engine wailed like the proverbial banshee and the entire car felt so incredibly connected to the road, the controls so amazingly telepathic in their feedback that I immediately became an M3 devotee and would have been an owner if finances allowed.

Since then I’ve driven every updated generation of M3 created and enjoyed them all, each one becoming more powerful, commensurately faster and along with the 3 Series they were based on, quite a bit larger, and therefore while overall cornering capability continued to increase, the new iterations didn’t feel quite as flickable through the curves as the older ones, especially that aforementioned European specification E36 M3, which made me especially curious when first hearing about the smallish M235i.

xDrive, ladies and gentlemen, the tenacity of four-wheel grip, combined with the ultra quick-shifting expertise of a BMW optimized eight-speed ZF automatic transmission with paddle shifters. The manually shifted rear-drive model I drove last year, that’s still available for 2015, can sprint to 100km/h in 4.8 seconds, not too shabby, but BMW’s all-wheel drive system with standard automatic gearbox shaves another 0.2 seconds off the car’s zero to 100km/h time despite its substantially heavier 1,676-kilo (3,695-lb) curb weight.

In case you’re wondering, the 2 Series Coupe starts out as a very agreeable $36,000. That 228i Coupe boasts a 241 horsepower turbocharged four with 258 lb-ft of torque, the same engine found in everything from the 328i Sedan, GT and Touring, 428i Coupe, Cabriolet and Gran Coupe, to the mid-size 528i Sedan, not to mention X1, X3 and X4 xDrive28i models. All of these BMWs also get an optional 3.0-litre turbocharged six too, most often producing 300 horsepower and 300 lb-ft of torque, but for the 2 Series BMW throws out protocol and jumps straight to its M variant, the only way to get a six-cylinder being the $45,000 M235i. You won’t here any complaints from this M fan. Don’t get me wrong, as I loved the old E82 135i Coupe that came before. Just the same, the 1 Series M Coupe (or 1M Coupe) was the version of that fun loving two-door we all wanted, and therefore skipping past the soup and salad and right into the meat makes a lot of sense.

If you haven’t got the gist of my embarrassingly long introduction yet, the M235i deserves its M moniker, and not just because of how it looks. Certainly all the M badges and sporty styling upgrades help, the two-door model’s overall profile ideal for a little M massaging. The first of such enhancements comes from a redesigned front fascia incorporating larger deeper air intakes on the lower portion, but oddly, like its larger M family members, no fog lamps. Unlike its supercar siblings the M235i doesn’t incorporate any front fender-mounted engine vents or garnishes, therefore not interrupting the 2 Series’ sleek bodywork. And while some M cars have large spoilers on their backsides, the M235i incorporates the tiniest of deck lid spoilers for a tasteful, mature appearance, while its rear end styling also features a dark grey gloss diffuser-style bumper cap with dual chromed M branded exhaust pipes poking through. The entire package is rounded out with a simple yet sporty set of twinned five-spoke alloy rims on 225/40R18 front and 245/35R18 rear performance tires. Visible through the spokes are large rotors clamped down on by glossy blue M emblazoned sport brakes. The M235i certainly looks the part of an M car.

As you might expect the interior is very nicely finished too, and much more luxurious than either the old 1 Series or that M3 from the past. It comes with a soft-touch dash top that extends down each side of the centre stack to the lower console, across the door uppers and the rear window sills, with nice padded, stitched leather in the door inserts and firmer stitched leather for the armrests. Of course, you know you’re not in an M4 or even a 428i when you tap hard and hollow plastic under the audio interface, on glove box lid and lower door panels. That said BMW adds a nice soft leather kneepad for the driver, whereas the hard plastic on the lower console is just like that in the 4 Series. Some of the detailing in this M235i is superb, however, especially the patterned and slightly textured aluminum trim across the dash, down the console and overtop the door pulls. It’s also appreciated that all of the 2 Series switchgear is every bit as good as that in the 4 and 6.

All this is mostly very good, but I’m guessing its overall refinement isn’t the crux of what you came here to read about. How all of its 322 horsepower and 332 lb-ft of torque feel off the line is likely of more interest, not to mention my seat of the pants experience through the corners. Before I even left BMW’s parking lot it was obvious this little dynamo was different, the raspy sound of its exhaust note getting my adrenaline going as soon as I pressed the start button. The twin pipes resonate with a percolating gurgle that’s downright intoxicating, a sound that was only improved after heading out on the road, hitting the throttle and letting the engine rev. It winds out to a glorious 7,000 rpm, and believe me, few performance cars this side of a Ferrari, Lamborghini or the previous-gen M3 sound so good. What about the new M4? Well that depends on what type of auditory experience you like. The M235i is a lot more classically BMW, whereas the new M4 sounds like a pack of thundering V8s rounding Las Vegas Motor Speedway (I’ve been there and it’s awesomely deafening, but it’s hardly classic BMW). In other words, the M235i’s mill is probably the best sounding direct-injection inline-six the company has produced yet.

No matter where I was, impatiently cruising through town or joyfully opening it up on the freeway, power was ever ready and plentiful. I got (almost) all of my ya ya’s out on a local mountainside road that’s used to such foot stompin’ mechanical dancing, and with little traffic and brilliant stretches of tight fast-paced S-curves, even tighter hairpins, long kinked straits and plenty of vertical, the M235i delivered smile a second super coupe performance. On the way up it was all about the engine and on the way down all about the M sport brakes, the former more than capable of pushing head and torso rearwards into the driver’s seat backrest while right foot pressed against accelerative forces to get the most out of the go pedal, while the binding power of the latter was awesomely unfading, literally. No matter the force used against the brake pedal, the result was immediately responsive deceleration.

Where the M235i xDrive differed from the rear-drive version I tested last year was a totally unshakable rear end. I did my best to throw the little red devil off line with no effect, but its rear rubber kept rooted to pavement with such unwavering conviction that even with Sport+ mode turned on and therefore traction and stability control turned off I could barely get a squeak out of its Michelin Pilot super sports. It is possible to shake its back half loose, but such requires aggressive behaviour that goes far beyond the way most folks drive, a chore even for serious drifters, which means that those of us who simply want to go quicker with less noise and burnt rubber, enjoying every subtle response of the variable sport steering and all of the control offered by its adaptive M suspension will do well at the wheel of the M235i xDrive.

Incidentally, a very useful addition is BMW ConnectedDrive for only $500, which includes Advanced Real Time Traffic Information (ARTTI) with up-to-the-minute traffic info; Internet access via iDrive with a complimentary one-year subscription; BMW Online & BMW Apps for access to weather, news and other info, plus integration of popular smartphone apps via iDrive; Remote Services for connecting your smartphone to your car; Concierge Services that provide a personal assistant via BMW’s Response Centre to help find POIs; and the BMW ConnectedDrive Services Package.

The result is fuel economy that’s a lot friendlier than expected in such a performance-oriented sports coupe, its rear-drive variant good for a claimed 10.4 L/100km combined city/highway with the manual and 10.2 with the automatic, or the xDrive automatic model that I tested estimated to attain 10.0 flat.

It’s a practical little coupe too, with enough room in back for two adults in a pinch, although it’s better suited to smaller folks or kids, plus it has a decently sized 391-litre (13.8 cubic-foot) trunk. The rear seats can be laid flat in the usual 60/40 configuration, but a standard pass-through allows stowage of longer items while the outboard seats are in use.

In the end it’s the M235i’s fabulous performance and affordable starting price that wins it buyers, the xDrive option improving its stability in all types of weather. While I’d still love to get my hands on a ’94 M3, the M235i is much easier to find and no doubt a more livable alternative.
©(Copyright Canadian Auto Press)
Car Shopping Tools