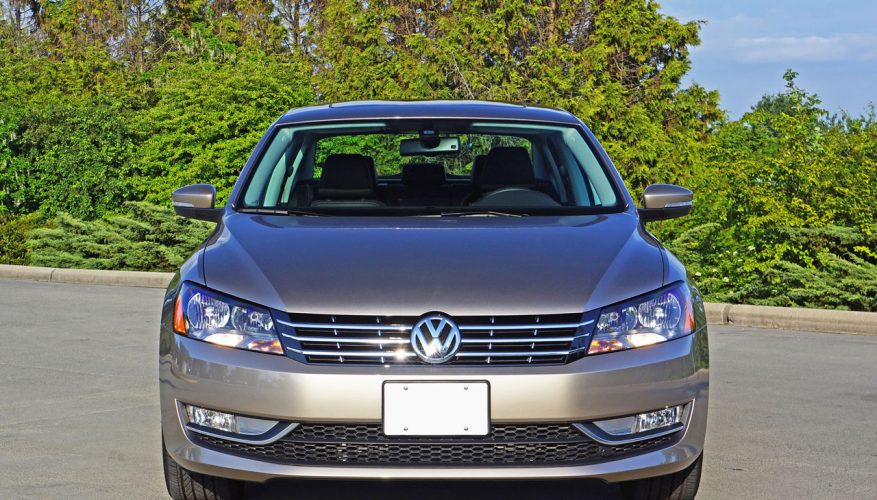 By: Trevor Hofmann
It’s amazing how times change and our perception about what’s acceptable changes with it. This is true for politics, social issues and even religion, plus of course the products we buy.

On that last point I first covered the Volkswagen Passat in June of 2002, and the 1.8-litre turbocharged four-cylinder engine in my test car made 170 horsepower, up 20 horsepower from the year before and therefore well deserving of an emphatic exclamation mark! Likely such excitable punctuation had more to do with my youthful exuberance and inexperience as an auto scribe as it did this model’s performance, but just the same that was a lot of power for a base mid-size car back in those days, whereas its upgraded 190 horsepower 2.8-litre V6 delivered considerable performance for the era.

Something we’ll likely never see again is an eight-cylinder mid-sizer from a mainstream volume brand, but a week spent with the fabulous Passat W8 in the summer of ’03 was enjoyable to say the least, yet still this 4.0-litre monster’s 270 horsepower and 273 lb-ft of torque doesn’t measure up to the 3.6-litre V6 in today’s top-line Passat. OK, the old W8’s torque was 15 lb-ft fatter, but the new engine’s 280 horsepower makes sure that few of its peers will be able to keep up when allowed to run free, whereas the new base 1.8-litre turbocharged four’s 200 horsepower and 207 lb-ft of torque makes the base engine from years gone by seem downright doddering.

I reviewed the 2015 Passat 2.0 TSI only a few months ago, and late last year a 2014 Passat TDI, not to mention five Passats in various states of tune during the near decade in between (not including the Passat CC that would eventually give up the first half of its name) and was editor for even more Passats that our publication reviewed via various writers, and while much has changed from generation to generation no one can question the progress VW has made under the hood.

An important part of the Passat’s ongoing success is its just mentioned turbo-diesel power, and as expected the TDI has become more powerful over the years too, while delivering better fuel economy and lower emissions. Today’s Passat TDI receives a 2.0-litre common rail turbo-diesel capable of 150 horsepower and 236 lb-ft of torque, which is actually 10 horsepower more capable than the car I tested last year. This translates into strong immediate acceleration off the line, after which its performance is slightly more relaxed. It’s more smooth and progressive than quick feeling, which is ideal for errand running around town and absolutely wonderful on the highway where the Passat is at its best.

It’s a fairly large mid-size car boasting a well-sorted fully independent suspension with struts up front, a four-link setup in the rear and stabilizer bars at both ends. While German in design it’s tuned to modern-day North American tastes, so therefore comfortable fast-paced cruising is its forte. The current design, which was created for North American consumption and gets built in Chattanooga, Tennessee, offers a more comfort-oriented setup than its smaller predecessor, which, much like the model that continues in Europe and most other markets, was more of a sport sedan. Still, while front and especially rear seating is more than generous this larger Passat also provides better handling than the majority of its competitors, something I appreciated throughout my weeklong test. Braking is also strong thanks to four-wheel discs with ABS, electronic brake-force distribution, emergency brake assist and engine brake assist, and while these features are nothing unusual in this class the Passat’s positive brake feel and impressive lack of fade when pushed hard is.

Reading over a review of a then-new 2006 model I had the pleasure of driving in Boston during the North American press launch, I was impressed by the interior, stating that its dash, console and door plastics were “all made of extremely high-grade materials that would appeal to Audi owners, not only looking good but also nice to the touch.” The same is true of today’s Passat, at least with respect to the dash top plus front and rear door uppers. The Passat hasn’t been quite the same premium experience since the 2012 redesign, with lots of hard plastic on the lower dash and door panels, except for the armrests, and not a lot of detailing on these. It’s a minimalist design for sure. There’s nice wood trim on the dash, lower console and door trim, and cloth wrapped front pillars, which is much nicer the most mid-size challengers, although that older model wrapped all the pillars in cloth.

Still, VW relaxing its tactile quality hardly seems to be an issue with anyone but me, as the brand only sold 3,716 Passats in Canada during the entire 2006 year, while things got worse in 2007 with only 3,092 deliveries and 2008 was almost a write-off with just 2,589 Passat sales. The car bounced around the low to mid $3k range for the next three years until 2012 when the new model debuted and sales not only passed the 6,000-unit barrier for the first time, but more impressively managed to find 8,019 new buyers overall. Since then it came close to hitting the same mark in 2013 and managed a respectable 7,520 units last year, so buyers are obviously a lot more interested in the new car’s larger size and arguably more appealing styling, plus of course its more agreeable pricing.

While I’d love to get my hands on an absolute base Trendline 2.0 TSI six-speed manual just to see what its like to drive this $23,975 sedan (plus about $1,600 for freight and pre-delivery prep), yes the price has gone down even further since the model debuted in 2012, once again Volkswagen supplied me with a top-tier Highline trimmed TDI, which on the positive meant that I was able to enjoy all the comfort this model can provide with the best highway fuel economy in the segment. That would be a five-cycle EnerGuide claimed rating of 5.4 L/100km with the six-speed manual or 5.6 with the Tiptronic-equipped six-speed auto when out on the open road, while city mileage isn’t too bad either at 7.9 L/100km no matter which transmission you choose. Competitive mid-size hybrid four-doors will beat the in-town figure, but none can touch the Passat TDI’s efficiency or range on the highway.

As far as features go, the $33,895 Highline TDI is quite luxurious with Vienna leather and suede-like Dinamica-trimmed upholstery over upgraded sport seats that are heatable and eight-way power-adjustable up front, including powered lumbar support plus three-position memory for the driver. Other luxury items (not necessarily exclusive to Highline trim) include a tilt and telescopic leather-wrapped three-spoke multifunction steering wheel, a leather-wrapped shift knob and handbrake lever, an analog clock in the centre dash position, Autumn Nut Burl trim, aluminum doorsill scuff plates featuring the “Passat” logo, ambient lighting, a powered glass sunroof, dual-zone automatic climate control, and a folding armrest with cupholders in back plus rear reading lights.

The top-line Passat also gets dressed up with daytime running lights, fog lamps, turn signals integrated within the side mirror caps, and 18-inch alloys on 235/45R18 all-seasons. Lastly, all Passats include traction and stability control, an electronic differential lock, tire pressure monitoring, Intelligent Crash Response System (ICRS), the usual assortment of airbags, and a four-year or 80,000 km comprehensive warranty that’s a year longer than most rivals.

While I’m rattling off all of these features it brings to mind that the Passat comes up a bit short on a number of items that many of it’s rivals offer in their highest trim levels, such as a powered steering column, adaptive cruise control, auto high beam assist, ventilated front seats, heated rear seats, and a panoramic sunroof, not to mention the majority of top-tier active safety features such as blind spot warning/lane departure warning, lane keeping assist, rear cross traffic alert, moving object detection, predictive forward collision warning, forward emergency braking, and the list goes on. Of course all of these upgrades would push the Passat’s price higher, but as noted many competitors offer these features and more in their top trims, so VW may want to do likewise in order to keep up with the mid-size pack.

In the end, a few missing premium-like features aside, the current Passat does most everything mid-size sedan buyers would normally ask of their cars, and then when it comes to handling and fuel economy, more than most competitors. Its Audi-esque styling should continue to make it a more popular choice than it ever was before and overall functionality keep owners satisfied well after the infatuation of their initial purchase fades. Yes, I must admit that if I were buying a mid-size four-door the Passat TDI would be very high on my shortlist. I can’t help but recommend it.
©(Copyright Canadian Auto Press)
Car Shopping Tools