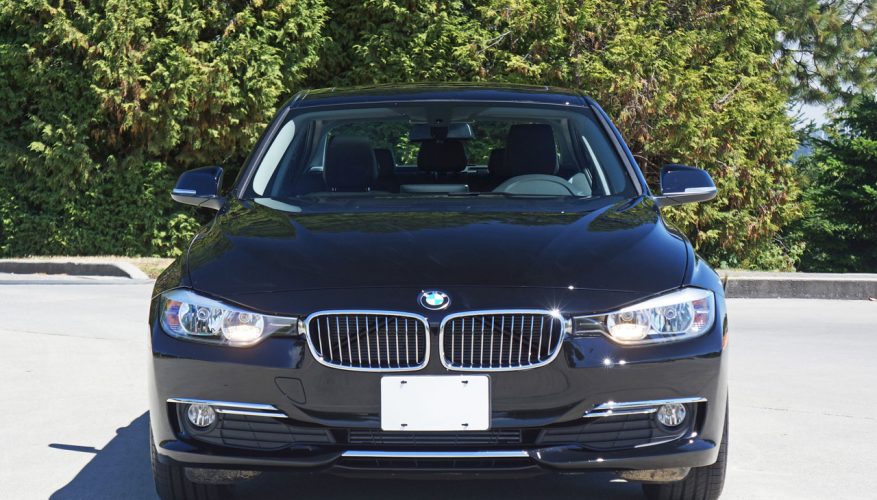 By: Trevor Hofmann
I love the look of the new 3. The elongated twin kidney grille, the way the curvaceous headlamp clusters bleed into that grille, the long, thin engine and brake cooling vent under the bumper finished off with two narrow strips of chrome garnish overtop neat circular fog lights. The car’s profile looks sleek for a relatively upright four-door, the greenhouse finished in bright metal to highlight its classic Hofmeister-kinked rear quarter windows, and finally the rear end design capped off with two of the most attractive trademark L-shaped BMW taillights to come along in decades, a couple of unimposing reflectors on the rear bumper just below and a thin strip of chrome embellishment that visually ties in with the chrome exhaust tip at bottom. An elegant set of optional multi-spoke alloys on 225/45R18 Pirelli Centuratos ideally rounds out this particular model’s look. Altogether it’s BMW minimalism at its finest, and reason enough for this car to rank much higher on the sales charts than its rivals.

Of course there are many more reasons to like the BMW 3 Series than styling. Before I delve into these I need to clarify that three body styles fall into the current 2015 model year 3 Series camp, including this four-door sedan, the long running Touring sport wagon and the particularly practical five-door GT newcomer. The sportiest five-door model to be based on the 3’s platform architecture is actually the 4 Series Gran Coupe, while as you likely now realize the old 3 Series Coupe and Cabriolet models now reside under the 4 Series moniker. Changing the name was a smart idea that should have been implemented years ago, but it’s here today much to my liking and the unfortunate chagrin of purists.

Yes, BMW isn’t merely a transportation company. Rather, they sell drivable dreams to lifetime enthusiasts. Some of these know their Bimmers better than the folks at Petuelring 124, 80809 München. I once met a zealous follower at a car gathering that knew each and every BMW exterior paint finish by name and colour code from memory (or so he claimed). I mentioned a couple of old E36 favourites, Sienna Red (which is actually a burnt orange) and Madeira black (a deep purple) and he rattled off “362” and “302” without breaking a sweat. A great mind wasted? Possibly. Either way, BMW has a knack of endearing its diehard fans, and cars like this current 3 Series are reasons enough.

My 3 Series tester was the least powerful in the car’s multiple engine lineup, a 320i with optional xDrive all-wheel drive. This 320i nameplate has seen various engine designs over the years, starting with a 2.0-litre four-cylinder in the original 1975–1982 E21 3 Series (a particularly pretty model that is credited with the first use of the aforementioned Hofmeister kink), an engine that made just 110 horsepower when the car debuted in North America (which was considered quite sporty at the time, especially after the 100-horsepower 1.8-litre version followed it in 1980 – it was still dubbed 320i). The E30 320i was never sold in North America, but the ultra-smooth 148-horsepower straight-six 1993–1995 320i we enjoyed here in the Canadian-spec E36 actually never made it stateside (one of my auto scribe colleagues drives one of these with over 240,000 clicks on the odometer). The E46 320i wasn’t sold south of the border either, and oddly uses a 2.2-litre inline-six that was good for 168 horsepower despite keeping its 20 suffix, while the 2.5-litre in the E90 323i was actually a 174-hp 2.5-litre engine (there was no 320i offered with the E90), which brings us to the current F30 320i tested recently.

The 3 Series’ sixth-generation, internally coded F30, was introduced around the world in 2012, and with it the first use of a four-cylinder gasoline engine to North American markets since the 318i of the late ’90s. The 2.0-litre (1,997 cc) N20 turbocharged and direct-injected inline-four comes in various guises, including this 320i’s 181 horsepower version with 200 lb-ft of torque, the latter available from only 1,350 rpm, and the 328i’s 241 horsepower iteration with 258 lb-ft of twist from an even deeper 1,250 rpm. Both engines rev out to 7,000 rpm and make nice noises doing so, while the big reason for BMW to move back to a four-cylinder design shows up in the two models’ five-cycle EnerGuide fuel economy ratings.

The 320i sedan is good for 8.4 L/100km combined city and highway in rear-drive guise or 8.7 with its as-tested xDrive all-wheel drivetrain. Despite the added power, the rear-drive 328i maintains identical efficiency numbers at 8.4 L/100km combined whereas it achieves a claimed 9.1 with xDrive. As an aside, the 3 Series economy star is the turbo-diesel engine found under the 328d xDrive’s hood, a car that manages to eke out 6.7 L/100km combined, although the ActiveHybrid 3’s 8.7 combined rating is worthy of mention too, considering that model’s impressive acceleration. Performance in mind there are also 335i and M3 variations on the 3 Series theme, but we’ll leave these for other reviews, as the majority of 320i buyers aren’t likely considering BMW’s higher priced models.

Yes, the 320i is not only BMW Canada’s least expensive 3, but also its entry-level four-door. It starts at just $35,990 in regular rear-wheel drive or $39,990 with xDrive (plus $2,095 for freight and pre-delivery prep), the former making it $2,500 more affordable than the entry Audi A4 and a shocking $7,000 less expensive than the cheapest Mercedes-Benz C-Class. What about the Americans and Japanese? The 320i is also $2,000 less expensive than the Cadillac ATS, $1,900 more affordable than a Lexus IS and $1,500 cheaper than an Infiniti Q50, Acura’s new TLX the only car in the class to undercut it, and then only by $1,000. This said is this entry-level front-wheel drive TLX really a competitor? This is an argument best left for another time. A number of the other segment rivals are priced higher because their respective brands offer smaller four-door models that sell for less, but put any of these less expensive compacts beside a 320i and see if its interior measures up to the quality BMW offers.

Metal accents, wood trim and various small panels aside, the only 320i surfaces that aren’t soft to the touch are the sides of the centre console and the insides of the door pockets, the rest of the cabin beautifully finished in the highest quality pliable synthetics. Even the door panels are soft right to their lowest extremities, as is the glove box lid, two areas that aren’t always detailed out as nicely with competitors. Attractively grained glossy wood graced the instrument panel and lower console of my tester, while nice brushed aluminum trim added some wow factor to the rest of the cabin. It’s all tastefully done in BMW’s traditionally discrete style, with quality amongst the best in the 3’s large compact luxury D-segment, not just the more compact C-segment below. Even the carpets are a cut above, plush and tightly woven yet softer than the turf-like rugs used by some other manufacturers. Likewise, the woven roofliner is made from top-tier material that also wraps down each roof pillar, as is the norm in the premium class. All of the switchgear is near perfectly spaced with imperceptible side-to-side wiggle, nicely damped and produced from high-quality (read not hollow feeling) plastics. And yes, even this base $36k 320i delivers the same level of quality as the $50k-plus 335i.

Also standard is a menu of state-of-the-art efficiency technology starting with BMW’s Driving Experience with Eco Pro, a driver selectable system that tones down throttle response, air conditioning performance, and more to save on fuel, plus automatic start/stop that shuts the engine off when it would otherwise be idling. The 320i also comes standard with a wonderful six-speed manual transmission, although my xDrive tester made BMW’s phenomenal eight-speed Steptronic automatic standard, a $1,600 option with the base 320i. This gearbox includes the usual manual mode via the shift lever, plus adaptive transmission control for when you’d rather have the gearbox think on your behalf. It adapts to your driving style as well as road and weather conditions to deliver the best possible performance, whether to improve go-power or save on fuel. It’s an extremely responsive transmission that delivers quicker shifts than you could possible attain via the six-speed manual, and better yet can be upgraded with steering wheel paddles and a hotter Sport+ mode for a mere $200 on the rear-drive 320i or via the $1,500 Performance Package in xDrive guise.

My tester didn’t include the upgrade, but that didn’t stop BMW from improving on the base car. A $3,200 Luxury Line package added gorgeous 18-inch multi-spoke alloys to the outside and rich black Dakota leather upholstery with contrast stitching inside (Saddle Brown, Veneto Beige and Oyster grey colour schemes are also available at no extra cost), plus Burl Walnut accents (Fineline Anthracite, Fineline Pure Wood or Brushed Aluminum trims are also available for no additional cost), extra chrome trim highlights (or high-gloss black), a powered glass sunroof, a pass-through loading system behind the rear centre armrest, a heatable sport steering wheel, and extremely comfortable and supportive sport seats. Incidentally, an identically priced Sport Line package offers the same features with a sportier twist. On top of all this my tester came with BMW’s $2,000 Navigation package featuring on-board navigation with a 20-gig hard drive plus an extended primary instrument cluster, while the final addition was a $450 rear parking sonar system, always appreciated when trying to fit into tight “small car” parking spaces. This tallied up to $45,640 less freight, fees and taxes, although your local BMW dealer wouldn’t mind if you wanted more.

An inexpensive but useful addition is BMW ConnectedDrive for $500, which includes Advanced Real Time Traffic Information (ARTTI) with up-to-the-minute traffic information; Internet access via iDrive with a complimentary one-year subscription; BMW Online & BMW Apps for access to weather, news and other info, plus integration of popular smartphone apps via iDrive; Remote Services for connecting your smartphone to your car; Concierge Services that provide a personal assistant via BMW’s Response Centre to help find POIs; and the BMW ConnectedDrive Services Package.

Want more? A favourite BMW design element is its signature corona ring headlamp upgrade that comes as part of the $1,200 Lighting package. Along with the bi-Xenon HID headlights with LED corona rings it features the Lights Package featuring door exit lamps and handle-area illumination, plus an auto-dimming rearview mirror and auto-dimming side mirrors. A $1,200 Premium Sound package is also available, adding a powerful Harmon/Kardon stereo including satellite radio with a one-year subscription, whereas that paddle-shifter and Sport+ mode infused $1,500 Performance package I spoke of earlier also comes with variable sport steering and an adaptive M suspension.

I touched on the front sport seats, but didn’t mention how comfortable they are in the lower back area, an important issue with those of us getting on in years. The 320i’s rear bench seat is plenty agreeable too, with good lumbar support in its two outboard positions, while the rear seating area is roomy for the class. Ditto for the trunk that measures a massive 480 litres (16.9 cubic feet), while featuring standard 60/40-split expandability via the rear seatbacks when the optional 40/20/40 configuration isn’t chosen.

In the end, the 320i isn’t the quickest sedan in the 3 family at 7.5 and 7.6 seconds to 100km/h for rear-drive and xDrive versions respectively, but it felt spirited off the line and easily capable of putting slower traffic in the rearview mirror on the highway. More importantly the driving position is perfect and overall ergonomics ideal, steering wheel brilliant, and auto gearbox one of the most advanced of its kind on the market, all combining to make the most of its superbly sorted chassis dynamics. The 3 Series, whether in base 320i form or any of its pricier alternatives, remains the D-segment luxury sport sedan to beat when it comes to all-round performance, yet its interior is also better than most rivals and the 320i’s value proposition is extremely advantageous.
©(Copyright Canadian Auto Press)
Car Shopping Tools