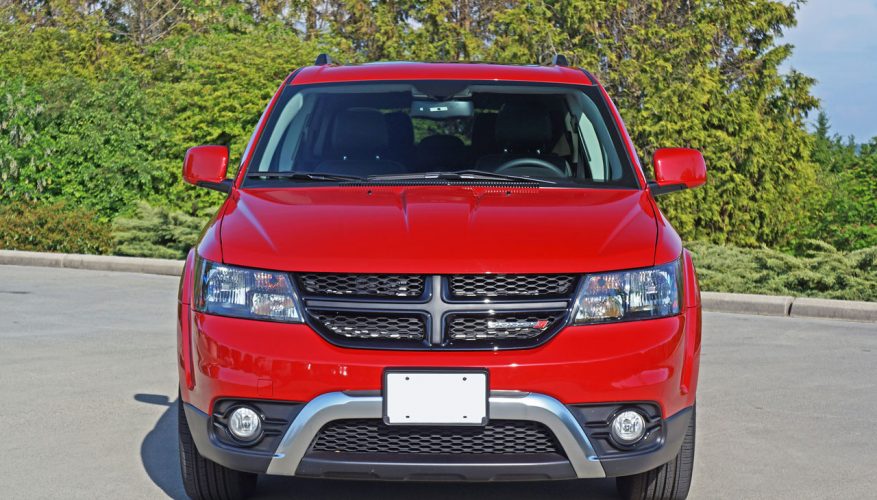 By: Trevor Hofmann
When Dodge introduced the Journey in 2008, expectations were that it would soon replace the Grand Caravan minivan. After all, the GC’s sales were down significantly, about half of what they were four years prior in the US and some 15,000 units lower in Canada, and minivans overall were a dying breed, with Ford having axed its Freestar a year prior, GM having already announced that its Chevrolet Uplander and Pontiac Montana vans would shortly follow the same fate (they did in 2009), everyone expecting Hyundai’s slow-selling Entourage to die an untimely death (it did so in 2010), and somehow through all this minivan carnage the ill-conceived Grand Caravan-based Volkswagen Routan came and went without many even taking notice. All along the Dodge Grand Caravan continued to enjoy overwhelming sales leadership in the minivan sector, while the Journey held its own in the mid-size CUV segment.

That Journey, which has been a top-seller in the mid-size crossover SUV segment since it arrived, was expected to take over from the Caravan at some point, but even after Dodge’s minivan was given its official cancellation notice (this is its final year) the GC not only remains the best-selling model in FCA Canada’s Dodge lineup, but responsible for more than half of the brand’s total sales. Last year the domestic brand sold 51,759 Grand Caravans in Canada and just 92,996 Dodge branded vehicles, and this wasn’t even the model’s best year. In comparison just 24,715 Journeys found homes north of the 49th during the same period, which made it one of the mid-size segment’s best sellers yet nowhere near the Grand Caravan replacement Dodge had hoped for. Exactly how this minivan/crossover story turns out is anyone’s guess. Chrysler will take over full minivan duties next year, but despite its Town and Country enjoying its best year in the last decade at 8,944 units, it’s a relative rarity as far as minivans go. Chryco dealers no doubt have their fingers crossed that their Grand Caravan customers simply migrate across the showroom floor to the ritzier Town and Country instead of looking to the imports, while they’re probably also hoping for a larger Journey redesign to arrive on scene soon.

While a larger Journey might help the model take over from the Grand Caravan and an updated second-generation is necessary after seven years on the road with only minor changes, the Ryan Nagode designed model has nevertheless stood the test of time well, while still proving extremely popular as noted. After abandoning its minivan Ford’s seven-passenger crossover success has been abysmal at best, with the 2009 Taurus X (the renamed Freestyle) only finding 870 Canadian buyers and the boldly styled Flex that took its place only managing a scant 2,365 Canadian sales last year. Fortunately for Ford they have the reincarnated Explorer SUV that sold 12,677 units here last year, but even both of its mid-size seven-seaters combined don’t measure up to the Journey’s annual success. Likewise for GM, which only managed 3,886 Chevrolet Traverse, 5,973 GMC Acadia and 3,528 Buick Enclave sales in Canada last year (even in their final and worst year the Uplander sold 10,433 and Montana managed 9,687 Canadian unit sales), and Hyundai eked out 4,894 deliveries of its seven-passenger Santa Fe XL, while second-best selling seven-passenger Kia Sorento did well with 13,982 sales, and fourth-best selling Toyota Highlander (or third-best if you count the Explorer as an SUV instead of a crossover) was only able to find 9,749 new buyers last year, the Nissan Pathfinder following closely with 9,688. Honda’s Pilot and Mazda’s CX-9? Only 6,113 and 1,543 units sold in 2014 respectively. How should Dodge feel about Journey sales? Even last year’s rather slow sales were far better than any of its direct seven-passenger competitors.

Its success comes down to some obvious factors. First off it looks pretty good even after all these years, as noted above, while it’s also filled with thoughtful standard and optional features, but neither of these two or any of its other attributes contribute to its overall success as much as pricing. You can buy a 2015 Dodge Journey for as little as $19,495 plus $1,695 in freight and pre-delivery prep fees, while there might even be a thin margin built in for an additional discount or trade-in allowance if you ask nicely. That’s equivalent to the price of a reasonably well-equipped subcompact hatchback or a meagerly suited up compact car, not a mid-size SUV capable of five (not seven at this price) occupants and loads of gear. If you’ve been considering driving for Uber on the side, this could be your ideal ride. Even (almost) fully loaded like my Crossroad AWD test vehicle the asking price is only $34,415, just a little higher than where some of its seven-passenger competitors start and still more affordable than most fully equipped compact crossovers. Yes, the Journey is a great deal.

On top of all this my tester included the $825 Navigation and Sound Group that added an ultra user-friendly Garmin navigation system and a ParkView back-up camera to the infotainment system; the $1,200 Rear Seat Video Group with a nine-inch overhead monitor, remote control and two wireless headphones; a $1,295 powered sunroof and $200 child booster seats integrated into the second row. Its sharp looking Redline Pearl paint was a no-charge option.

If the Navigation and Sound Group wasn’t chosen this Journey could have come with a $325 Driver Convenience Group featuring the ParkView back-up camera, Park-Sense rear park assist system, and a universal garage door opener, while available either way is a $395 Mopar All-Weather Group with a front air deflector, splash guards, doorsill guards, and slush mats.

If it weren’t a very good CUV already then all of these features and even its superb pricing wouldn’t have kept the Journey selling so well throughout its lengthy tenure. Just the same you might be surprised at just how nicely finished its interior is consider its low price, with soft-touch surfacing across its dash top, instrument panel facing and even down to the lower portions of the dash panel, albeit not the glove box lid or sides of the centre console. No worries, as a number of premium-branded crossovers don’t include soft synthetics on these surfaces either, or for that matter some of the areas the Journey covers. Additionally the popular Dodge gets soft surfacing on the door uppers that extends halfway down each door, at which point it butts up against a nice leather-like door insert with contrast stitching. The same treatment is used to cover the armrest, while attractive satin grey/silver metallic gets used for the door handles and surrounding trim, as well as the steering wheel spokes and dash accents. The majority of controls are above average in quality too, while overall ergonomics are excellent. Needless to say you’ll be impressed with the Journey Crossroad AWD.

The 3.6-litre V6 I mentioned earlier is a wonderfully smooth engine that’s every bit as good as anything from Europe or Asia. It’s a three-time winner of Ward’s coveted “10 Best Engines” after all, something most rivals can’t claim, while its six-speed automatic transmission is well-proven and plenty refined, complete with manual shift mode for those moments when you’re feeling racy, or on a more practical note are maximizing the all-wheel drive system’s capability in the snow or dropping down a gear while towing something heavy.

It’s capable of a 1,134-kilo (2,500-lb) towing capacity and 699-kg (1,541-lb) payload compared to the four-cylinder front-wheel drive model’s 454-kg (1,000-lb) towing and 455-kg (1,003-lb) payload numbers, although I can’t speak to how it feels when loaded with trailer in back as I’ve never had the privilege. No doubt its long wheelbase helps it track well while in tow, and aforementioned trailer sway control helps keep loads under control. I can attest to its capability when loaded up with furniture, however, something I tested first hand while transporting some older pieces back to the family storage locker for safe keeping. I wasn’t too worried about doing so because this particular vehicle was well used, with plenty of scratches and dings from front to back. Some vehicles get treated nicer than others, but others appear to be used as the family haulers that they are, and in the case of the Journey it was well experienced for something so new. Even loaded right up to its rafters (and believe me you can fit a lot more in the Journey than most rivals) it remained fully connected with the road, while its compliant ride didn’t allow the furniture in back to be shaken up too much over a few rougher portions of pavement. Unladen the Journey handles very well in true crossover SUV fashion, its standard front strut and rear multi-link suspension setup especially nicely sorted with my tester’s Touring suspension upgrade, while braking performance was more than adequate throughout my weeklong test.

As mentioned you can get the Crossroad in front-wheel drive, four-cylinder guise, the engine a 2.4-litre unit making 173 horsepower and 166 lb-ft of torque while a rather rudimentary four-speed automatic takes care of shifting duties, its starting price a mere $27,795 and fuel economy rated at 12.7 L/100km in the city and 9.1 on the highway, but while it looks very similar its feature set is nowhere near as complete. The 3.6 AWD Journey achieves a five-cycle EnerGuide rating of 14.2 city and 9.4 highway, which compares very well to other V6-powered, all-wheel driven crossovers in the mid-size segment.

I mentioned load capability a moment ago and would be remiss if I didn’t expand on the subject by giving you a few numbers for comparison purposes. Behind its 50/50-split third row is a fairly small cargo compartment that Dodge doesn’t even quantify, but fold those seatbacks into the floor and luggage space opens up to a sizable 1,121 litres, while folding its 60/40-split second-row seatbacks down results in maximum cargo capacity of 1,914 litres. It comes by its space in length rather than width or height, allowing a 202 cm (79.5 inch) Ikea Billy bookcase to fit in with the tailgate closed, something most others in the class can’t achieve. In this respect the Journey is as close to a minivan in functionality as crossover SUVs get, with a handy storage bin under the front passenger seat that also folds flat for really long cargo, twin lidded storage bins under the floor ahead of the middle seats, another big bin below the rearmost section of the cargo floor, and as mentioned two optional integrated child booster seats at each outboard second-row position. Those middle seats move forward and out of the way for third-row access in one simple, easy movement, with the third row large enough for smaller adults or reasonably sized teens.

The Journey’s long, low and lean design gives it inherently sportier styling than some of its shorter and taller competitors, while the detailing of this Crossroad AWD model borders on custom tuner, especially the blacked out elements and satin aluminum-finish front bumper section, a theme that continues down the rockers and ends in the diffuser-style rear valance.

After spending a week in the latest 2015 Dodge Journey it’s easy to understand why it sells so well. It’s a CUV that I could recommend to anyone, whether they’re on a budget or not, as it delivers more practicality than most rivals, an impressive standard and optional feature set and unparalleled value from base to full load. You should consider it seriously.
©(Copyright Canadian Auto Press)
Car Shopping Tools