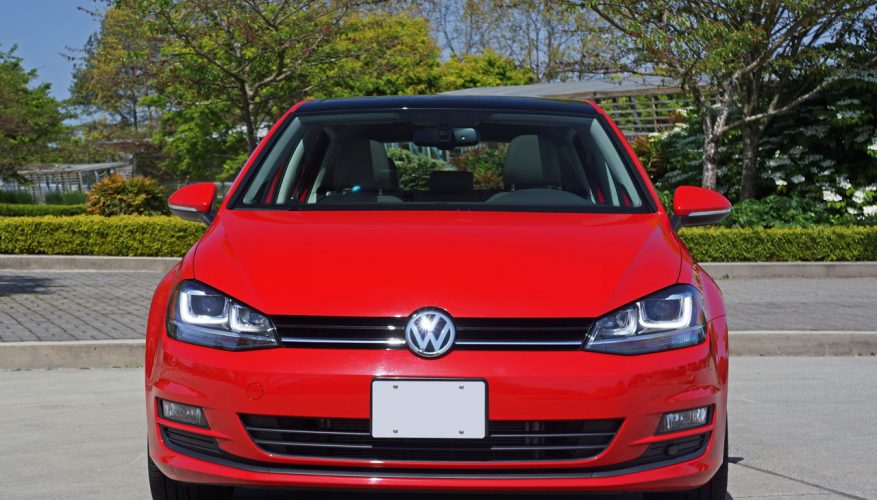 By: Trevor Hofmann
When it comes to the Golf, Volkswagen doesn’t make brash moves. Its development is purely evolutionary, evidenced in the all-new 2015 Golf, which is one of the safest redesigns in recent memory and therefore looks very similar to the outgoing 2014 Golf. Fans of the car, and there are many (that border on zealots no less), will say the new model is dramatically different than the old one due to its chiseled new LED infused headlamps, more sharply angled LED taillights and so on, but to most consumers who only pay attention to the auto market when it comes time to purchase a new car, this Golf looks much the same as the old Golf.

Of course, this is intentional. You don’t build a nameplate as successful as Golf by uprooting its diehard followers with every redesign. The changes need to come slowly, at least visually, as the powers that be certainly wouldn’t want to go too radical with a car that is now as iconic as the original Beetle. Still, despite this completely new Golf appearing more like a refresh than an all-new model, the car’s sales are on track to almost double during this calendar year. This is significant because it took more than 10 years to almost double from 2004’s 6,875 sales to last year’s 12,184, and with only six months into 2015 the new model’s sales were 10,416 units, and that’s not including the 1,490 GTIs scooped up by an even more amourous fan base.

Then again, TDI fans are an ardent lot too. And why shouldn’t they be? Their love affair with diesel gets them pump pricing that’s normally quite a bit cheaper than gasoline, plus about 30 percent better range than petrol powered counterparts, and fuel economy that’s miles more advantageous, especially on the highway. Take a 2015 Golf 5-Door 1.8-litre turbo four and compare it to this 2015 Golf 5-Door 2.0 TDI and you’ll see a clearer picture. The 1.8 is good for a claimed 6.4 L/100km in the city and 9.3 on the highway with its five-speed manual or 9.3 city and 6.5 highway with its optional six-speed Tiptronic automatic, whereas the TDI gets an estimated 7.7 L/100km city and 5.2 highway with its six-speed manual or 7.5 and 5.5 with the six-speed DSG dual-clutch automated gearbox. You don’t need to be a math honours student to figure out that cheaper fuel and much better efficiency results in savings in your pocket, at least over the long haul.

Yes, the 2.0 TDI is a pricier alternative than the 1.8, and for more reasons that fuel economy. A quick glance at the specs might immediately underwhelm with the TDI losing 20 horsepower over the smaller displacement 1.8 at only 150 horsepower, but look a bit lower down the technical data sheet and you’ll see that torque is up by a front tire screeching 51 lb-ft, the bar being raised from 185 to 236 lb-ft and resultant straight-line performance much more than just noticeable, at least immediately off the line. As speed ramps up the higher revving more powerful 1.8 will zip past the thriftier TDI, but for day-to-day driving, especially with the automatic, I prefer the whack in the back takeoff and steady, less peaky performance provided by the more linear diesel.

There are other differences that must be considered when opting for the TDI as well, such as initial pricing. You can get it with all three Golf trims including base Trendline, mid-grade Comfortline and top-tier Highline, but in similar fashion to how hybrid producers, VW included, absorb some of the pricier drivetrain’s costs by adding more standard features, the base TDI is filled with more features than the base 1.8. For starters, the Trendline TDI gets four doors instead of two, or in VW-speak, 3 doors instead of 5 (they include the hatchback as a door), plus standard fog lamps, heatable windshield wipers, heatable front seats that also include powered recline as part of their eight-way adjustment (adjustable lumbar support comes standard across the line, a nice bonus), front storage located in the centre console, an illuminated glove box, four tie-down hooks in the cargo area, and other small upgrades, plus of course the more advanced six-speed manual transmission I mentioned earlier, although on the negative the TDI gets a torsion beam rear axle instead of the base car’s much more handling friendly independent four-link suspension and Cross Differential System (XDS), a front differential lock that improves road-holding and traction. And you thought the move up to the TDI was all roses.

That’s a lot of kit for a base car, especially considering its strong performance. Just the same, Trendline options include cruise control, a leather-wrapped multifunction version of the aforementioned three-spoke steering wheel, and the six-speed automatic DSG with Tiptronic and Sport mode I also noted before.

Volkswagen was kind enough to give me a fully loaded Highline tester, incidentally priced at $30,995 before options, which included most everything from the optioned out Trendline as well as the majority of the $25,395 Comfortline upgrades, such as a chrome enhanced grille, 16-inch Toronto alloys on 205/55R16 all-seasons, leatherette Comfort seats, a leather-wrapped shift knob and handbrake grip, plus a rearview camera. The Highline also comes with some of the Comfortline’s options including rain-sensing wipers, dual-zone automatic climate control, an auto-dimming rearview mirror, and a powered tilt and slide “Panorama” sunroof (it’s not a full panoramic roof, but it’s a very large regular one), whereas both Comfortline and Highline trim can also be had with optional automatic HID headlights with signature LED daytime running lights and a coming and leaving home function, automatic high beams and adaptive cornering control, upgraded infotainment with navigation, and a 400-watt eight-speaker Fender audio system.

These last two items did a lot to improve the Golf TDI’s performance. While not as quick to 100km/h as the base car, the TDI will nevertheless move down the road at a brisk pace given enough time, which means that the Highline’s larger rims and meatier rubber keep its less controllable rear axle more in check when pushed through the corners. So equipped, most won’t even know that the TDI’s suspension isn’t fully independent, its ability to manage bumpy road surfaces amid fast-paced curves even better than some competitors that boast multilink rear suspension setups. Fast highway cruising is an effortless process too, as is zipping in and out of heavy traffic around town where its seemingly bottomless torque comes in very handy.

The DSG gearbox makes lickety-split shifts that are still smooth and uneventful, unless you’re full on power where each engaged gear can be positively felt. You can do it yourself via Tiptronic or leave it to its own devices, while Sport mode lets the engine revs rise a little higher before releasing the gear, helpful when coursing through a set of serpentine switchbacks. It’s at such moments when the Golf’s brakes are appreciated, their binding power relentless and resistance to fade surprising for the compact class. Then again I really shouldn’t be surprised with high levels of performance from a Volkswagen.

Same for the Golf Highline’s interior. As I’m sure you noticed I went over the features of this model at length, but simply naming off everything that comes standard and optional with the 2015 Golf doesn’t take into consideration the way it’s all put together, materials used and overall visual and tactile result. For instance, most compact competitors will either cover the dash top or door uppers in a nice soft-touch synthetic, but Volkswagen goes a step further by giving both surfaces the premium-level treatment. To be clear, the rear door uppers are no longer pliable like those up front, something that was lost in the 2015 upgrade, but the harder plastic used is nicely grained and matte finished to look like the upscale stuff, just like plastics found elsewhere in the cabin. Another premium treat is VW’s use of cloth wrapped A-pillars, while a stitched leatherette covers the armrests and a unique soft-touch surfacing gets used for the door inserts.

If you’ve been in Golf Highline interiors before you’ll immediately notice that this new one is flashier with more piano black lacquered trim than ever before. In this sense the Golf is a bit late to the party, as the trend finally appears to be waning due to its long tenure as well as problems with durability, the material highly prone to scratching and a terrible dust magnet. The carbon-look trim across the dash and door panels was nice, however, and looks like it will wear well, while the leather seating surfacing was up to VW’s usual high standards.

A big deal this year is the large, full-colour, high-resolution infotainment display and it surely doesn’t disappoint. It’s a pleasure to use with intuitive controls and myriad functions, while the navigation system worked well during my limited use. Likewise for the Highline’s set it and forget it auto HVAC system, allowing just the right temperature for me and my partner’s polar tastes.

On an equally practical note, I really like the way the bins in the doors are carpeted on one side to reduce the noise my go-everywhere plastic water bottle often makes in others, while they’re also large enough to fit the massive thing into, not always the case.

Likewise the Golf’s interior is roomy for four and capable of five, the centermost rear position a bit tighter than those to each side as is normally the case for compact models. I found all seating positions accommodating though, with plenty of head, leg, shoulder and hip room for my medium-build five-foot-eight body, while the rear seatback’s flexibility for passengers and their cargo is a real bonus. The spec sheet says 60/40, but the big pass-through makes it closer to 40/20/40. Skiers will like how all their boards can go down the middle while rear passengers can enjoy the greater comfort of the two window seats. As far as actual loading space goes, VW claims 493 litres (17.4 cubic feet) with the handy parcel shelf in place, 671 litres (23.7 cubic feet) when it’s removed, and 1,521 liters (53.7 cubic feet) of cargo capacity with both rear seatbacks folded flat. That’s a lot of gear-hauling space.

As for safety, I rattled off a host of standard kit a few minutes ago, all of which joins the Golf’s ultra-strong body structure for Top Safety Pick recognition from the IIHS. NHTSA crash tests are forthcoming.

In the end, the TDI isn’t the quickest Golf or the best handling, but it offers a nice balance of both while delivering the best fuel economy by far. When suited up in Highline duds it also provides one of the most impressive interiors in the mainstream compact class, bordering on premium. I highly recommend it.
©(Copyright Canadian Auto Press)
Car Shopping Tools