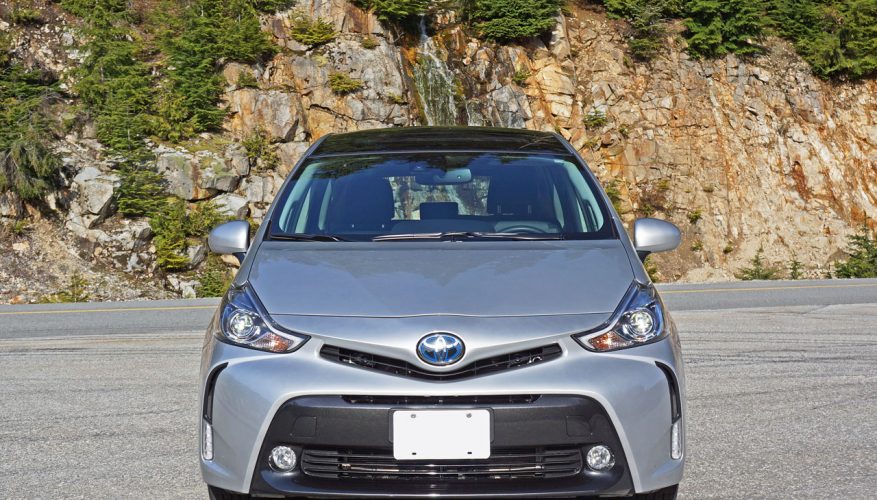 By: Trevor Hofmann
When Toyota brought the larger Prius V to market in late 2011 I took part in the launch program and was duly impressed. The car made sense then and still does today, especially here in Canada where the larger Prius V has outsold the regular model by a wide margin every year since introduction.

For 2015 Toyota has given the Prius V a fresh new face. It’s totally different from its predecessor that looked a lot like its smaller sibling, and early sales numbers affirm that fans of the big hybrid like what they see. Year to date deliveries are on track to once again hit last year’s total of 2,292 units, whereas the regular Prius is trending towards its 2014 total of 1,819 units.

I won’t have to go out too far on the proverbial limb to guess that many of these sales are to fleet buyers, particularly taxi companies and independent owner operators that previously bought the regular Prius in hoards and have now switched over to the more accommodating Prius V for obvious reasons. Just the same I see a lot of young families riding around the city in their own Prius Vs for all of the same reasons the car works so well for the cabbies.

The Prius V is all about size, efficiency, environmental stewardship and value. The third attribute is likely more of an issue with retail buyers than it is with taxi operators, but its ability to satisfy multiple requirements while appealing to both consumer and commercial buyers is exactly why the Prius V and all Prius models are so successful. While owners can enjoy the many feel-good benefits of doing the right thing for mother earth, living with a Prius is still a smart financial decision if you put a lot of low-speed urban miles on your car.

While the price of oil has gone up to about $60 USD per barrel since the beginning of the year when it plunged down to $50 USD on two separate occasions, it’s still much below last year’s highs of $100 USD plus. When our economy was first taking a beating from depressed oil prices we could at least smile over much lower pump prices that dipped under $1 per litre for the first time in years, but now regular unleaded is priced higher in my area than it was before crude took its deep dive downward, making the Prius as important for meeting tight family budgets as it ever was. Good timing for the redesigned Prius V.

Where the old Prius V was understated in an almost docile way, the new 2015 model is unabashedly proud. A protruding nose hovering over a thin slit of an upper grille which might otherwise look overbearing on any other design seems right at home above the Prius V’s massive lower grille opening that juts out in aggressive dominance, this portion of the front fascia done out in gloss black with optional circular fogs at each corner for a sportier look than the previous V, while its outer edges incorporate vertical front brake ducts with integrated LED driving lights that pay respect to the previous model while following the same raked lines as those on the new Camry. The complex multi-angle headlamp clusters just above look fittingly high-tech and include LEDs as tested, but this is very much at odds with the body-colour mirror caps fixed to the car’s shoulder line just behind that are devoid of integrated turn signals.

My tester wore a gorgeous set of 17-inch 10-spoke alloys wrapped in 215/50R17 Toyo Proxes A20 M+S winters, not the best for cornering unless road surfaces are drenched, muddy or snowy, while the only change to the V’s rear design is a set of revised tail lamp lenses with more red mixed in with clear and LEDs hidden behind, plus a sportier looking diffuser-style lower bumper cap finishing things off. All things said, those who previously purchased a Prius V for its accommodating interior, fabulous fuel economy and ability to blend into a crowd will have to forgo the latter if they plan to upgrade to a 2015, as this car is a submissive sheep no longer.

Of course, an industry forerunner like the Prius V can hardly be referred to as a sheep, even if its previous iteration looked somewhat on the obsequious side. Where the regular Prius initiated and then popularized the modern-day hybrid market, the Prius V took the concept to new proportions, literally, and the smallest Prius C, which is now the most popular Prius model in Canada, is also the most affordable hybrid available at $21,055. Sheep activity? Hardly. On the subject of value, the ability to buy an HEV as accommodating as the Prius V for as little as $28,090 plus $1,730 for freight and pre-delivery prep, just $1,785 more than the regular Prius, is an impressive accomplishment by Toyota and a bonus to active families who want to save on fuel while taking a stand for the environment, not to mention all those taxi companies that collectively buy them up by the thousands.

During a recent trip to the airport this became evident, the Prius V taxi that picked us up stowing a large SUV’s worth of luggage in back without breaking a sweat. The V can actually facilitate 359 litres (12.6 cubic feet) of additional cargo behind the rear seat than a regular Prius, the difference almost a Corolla’s trunk worth of space. Specifically it can accommodate up to 971 litres (34.3 cubic feet) of gear in back, while folding the 60/40-split rear seatbacks down results in a cavernous 1,906 litres (67.3 cubic feet) of luggage space. Additionally, there are two large bins under the cargo floor for hiding valuables or tools, winter chains, etcetera.

From a rear passenger perspective, the V provides a taller theatre-style seating position for better visibility, not to mention more leg and headroom than the regular Prius, my notes calling it limousine-like, even with more legroom than you’ll find in the majority of SUVs. Those rear seats slide fore and aft plus recline too, adding to the chauffeured experience, and while this might not benefit you directly, a sleeping brood in the back might make your next road trip a bit more peaceful.

More soft-touch surfaces inside result in a quieter cabin, not to mention a more luxurious one. Toyota wraps the A-pillars in fabric, while nice padded leatherette covers the dash trim in front of the driver and front passenger, overtop the upper glove box lid (there are two), plus the front door uppers, door insert panels that meld into the armrests, and of course the centre armrest that doubles as a lid to a fairly large centre console bin. Additionally, attractive satin silver details with chrome highlighting can be found throughout the cabin, plus glossy piano black plastic infotainment and HVAC interface panels, whereas my favorite Prius detail, the electric blue shift knob with its cool circuit board patterned background, mimics the blue emblem backgrounds on the exterior. Some other thoughtful details include a cupholder on the passenger side of the dash that conveniently pops out when required, helpful because there’s only one cupholder in the centre console.

Also standard is Toyota’s well proven Hybrid Synergy Drive gasoline-electric powertrain, the V’s electro-mechanical setup identical to the regular Prius liftback. What that means in numbers is 98-horsepower from the 1.8-litre Atkinson-cycle internal combustion engine (ICE) combined with an electric traction motor and 1.3 kW/h nickel-metal hydride motive battery for a total net horsepower count of 134. Torque is undefined, but during the aforementioned launch program the Toyota staff on hand approximated it at 142 lb-ft, although more importantly is the immediacy in which it arrives. While the V is only capable of a 12-second lope to 100 km/h, it feels much quicker off the line, its continuously variable transmission (CVT) maximizing the HEV’s output at all times.

What matters more to Prius V fans is fuel economy, this model achieving the best fuel economy of any “crossover” vehicle offered in Canada at 5.4 L/100km city, 5.8 highway and 5.6 combined, and those are the more realistic five-cycle EnerGuide ratings that all manufacturers must adhere to for 2015 and beyond. For comparison purposes only, the 2014 Prius V, which had the identical powertrain, was rated at 4.3 L/100km city, 4.8 highway and 4.6 combined. For the record, we averaged 5.9 L/100km with this 2015 model by using the car’s EV and ECO modes as much as possible and minimizing the temptation to press the PWR button next to these other than for testing purposes, and while this number is a tad higher than the official rating’s combined figure it’s still superb as far as CUVs go. Like all Prius models before, the V utilizes an automatic idle-stop system and regenerative braking to help it achieve such excellent efficiency.

The Prius V’s long wheelbase makes it especially nice on the highway, where it tracks effortlessly and can cruise all day comfortably. Amid tight fast-paced corners it’s not quite as agile as the regular Prius or the much smaller C, but it holds its own, maintaining its lane well unless pushed too hard. Once again I don’t think too many V owners made the choice to purchase the car for its driving dynamics alone, so its competent handling should be more than adequate even when in a hurry to get where you’re going.

For the way most of us drive these days, which more often than not is at a slow inner-city crawl, a hybrid is an excellent solution for minimizing fuel costs while lowering our individual carbon footprint, and the Prius V is one of the most family-friendly ways to do both while providing excellent long-range comfort when needed for road trips. It’s a low-cost, efficient, practical, do-all conveyance that truly needs to be tested out thoroughly to be appreciated. I recommend you do just that.
©(Copyright Canadian Auto Press)
Car Shopping Tools