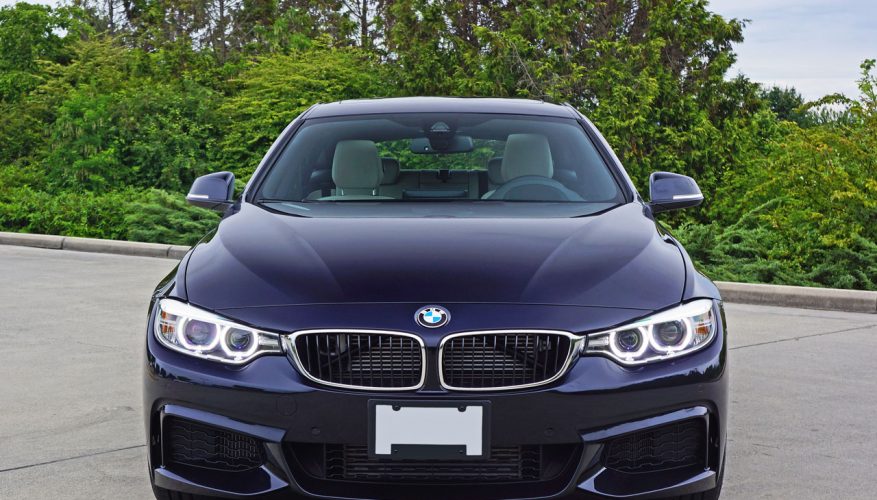 By: Trevor Hofmann
In an effort to seemingly fill every premium automotive niche imaginable, BMW brings us yet another take on personal performance for the 2015 model year. Expanding on its four-door Gran Coupe lineup, the larger 6 Series Gran Coupe arriving on the scene two years before, we recently took to the streets in a top-line 435i xDrive Gran Coupe, having tested the near entry-level 428i xDrive version late last year.

As fate would dictate, this more powerful version was finished in the same Carbon Black metallic paint as the last one despite numerous shades and colours available, while my tester also wore a set of 18-inch rims instead of the standard 19s due to winter Pirelli Sottozero 225/45R18 M+S rubber being fitted. Yes, an odd inclusion being that we never even caught a sniff of winter here on the west coast this year and are currently in the middle of a long dry spell that has our water reserves in question, but while not quite as visually impacting as the big 19s these 18s delivered superior ride comfort, not to mention the comforting knowledge of boy scout preparation just in case a flash mid-June snow storm occurred.

Wheels aside, the 435i Gran Coupe, which starts at $54,900 with rear-drive and $55,600 with xDrive all-wheel drive, plus $2,095 for freight and pre-delivery prep, $10,000 and $6,600 more than the lesser 428i and 428i xDrive models respectively, has some particularly nice detailing normally exclusive to M4 and M3 badged BMWs due to the M Sport package being standard, particularly the lower front fascia with its more aggressive brake venting and lower air dam. The upgraded M Sport brakes with M logos on blue painted calipers, those strangely missing M Sport 19s I mentioned earlier (although the 18s included M badges), and a sport suspension are part of the $1,900 M Performance Package also added to my tester.

Interestingly, there are no fog lamps in the upgraded 435i Gran Coupe, standard with the 428i Gran Coupe I tested before and normally something that differentiates lower trims from the higher end. I’m not complaining because I almost never use fog lamps, and besides the corona rimmed LED headlamps on this particular model are bright enough that any additional frontal light is just overkill, but it’s just something we’re used to seeing in this upper class.

The Gran Coupe’s profile arcs elegantly rearward, lower and more dramatically swept back than the more upright 3 Series sedan, while a similar set of narrow, elongated tail lamps to the 4 Series Coupe grace an extremely handsome rear end. A grey gloss panel caps off the lower rear fascia, interrupted by big chrome tailpipes at each corner.

As if I hadn’t already been won over by the Gran Coupe’s outward styling, opening the driver’s door resulted in a palpitating heart, or at least that’s how white leather affects me. The exact name of this optional interior motif is Oyster Dakota leather and fortunately it only covered the seats and door panels, the rest of the interior suitably finished in easy to clean black. Gorgeous hexagon aluminum trim across the instrument panel, along the lower console and down each inner door pull joined high-gloss black accents in other key areas, for an interior that was sporty in an ultimately classy way. The thick rimmed leather-wrapped three-spoke multifunction steering wheel included the colourful M badge at its lowest central point, a reminder of performance upgrades that would come alive at the first turn.

Both 4 Series Gran Coupe trims are replete with high-end soft synthetic surfaces just about everywhere, even the door panels getting the soft-touch treatment right down to their lowest extremities, the only obvious omission being each side of the lower console that BMW continues to cover in a rather flimsy feeling hard and hollow plastic, a shame considering how impressively the rest of the cabin is finished. I can look over this minor fault, mind you, as few cars in the compact C-segment deliver its level of luxury in such a dynamic package.

Ahead of the steering wheel is a set of leather and aluminum finished paddles that make the most of the ZF-sourced, BMW-tuned eight-speed automatic transmission. This gearbox is fast becoming legend for delivering shifts that are almost as quick as dual-clutch automated manuals, albeit much smoother during daily operation. BMW claims only 300 horsepower and 300 lb-ft of torque from its 3.0-litre turbocharged and direct-injected inline-six, but most experienced with the brand attest such numbers are understated at best, and the six pot mill makes quite a bit more. It certainly feels like it, the pull through the gears almost relentless at it reaches 100 km/h in a mere 5 seconds flat, 0.2 seconds quicker than the rear-drive version thanks to extra grip from the front tires. No doubt inclement weather of any sort would widen the off-the-line difference, but my reason for all-wheel drive has little to do with beating a would-be stoplight aggressor from a standing start.

More importantly to me is the ability to head up to the slopes mid-winter without the requirement to chain up, park warden sentries sometimes turning non-chained vehicles around unless equipped with four-wheel traction. To that end the Gran Coupe’s particularly useful liftback design can accommodate up to 480 litres (16.9 cubic feet) of gear behind the ultimately configurable 40/20/40 split-folding rear seatbacks, an undisclosed amount of cargo capacity when one or two of its three seatbacks are folded flat, the centre of which allows skis down the middle and two comfortable passengers at each side warming up with the outboard positioned three-way rear seat heaters, or 1,300 litres (45.9 cubic feet) of luggage space if they’re all laid flat. That might not be as much as the larger 3 Series Gran Turismo, but I like the styling and smaller, sportier size of the 4 Series Gran Coupe a lot more.

All BMWs fitted with the inline six sound just as sweet at full throttle, the sound emanating from ahead of the firewall and out the back of the aforementioned twin pipes particularly lovely in the 435i GC. With each flick of the right paddle and corresponding change in gears the exhaust lets off a little blat of exuberance and speed increases commensurately, the stock model capable of a 210 km/h terminal velocity, which is more than enough to get you into serious trouble with the law, so ample for me.

If you like more stimulation in your life you can opt for the aforementioned M Performance package that also includes high-speed maximum performance rubber along with those 19-inch M wheels for a maximum of 240 km/h, the M Sport brakes needed to slow everything down quickly and variable sport steering connecting through to an adaptive M suspension to keep everything locked to the road when pushing hard. During a particularly spirited portion of my test I noted these binders experienced almost imperceptible fade after repeated hard application, nothing new for a top-tier BMW yet welcome just the same. Likewise, turn-in was wonderfully crisp while the GC’s overall road manners lived up to BMW’s usual ideal reputation despite less traction from the smaller diameter winter rubber.

Those who still want more go-fast goodness can upgrade to the $2,500 M Performance Package II that adds an M Performance Exhaust system and the M Power Kit upping engine output by 35 horsepower and 32 lb-ft of torque, again conservative estimates compared to some competitors that have been known to exaggerate their claimed engine output.

While my 435i Gran Coupe did not include this last performance upgrade, it was equipped with some wonderfully welcome options such as a superb surround-sound Harman/Kardon audio system that came as part of the $4,900 Premium Package which also adds satellite radio, navigation (BMW’s infotainment graphics being some of the best in the business), convenient proximity-sensing Comfort Access, much appreciated auto-dimming side mirrors, a very clear rearview camera with numerous helpful guidelines, front and rear park distance control, adaptive headlamps, powered lumbar support, an alarm system, and a universal remote.

I have zero complaints with this car, as it met all of my personal performance criteria and everything needed from the perspective of practicality, while hitting all the right emotive buttons with respect to styling and interior finishings. Sure it would be nice if the rear windows rolled down a bit further instead of leaving five or so inches exposed, but this is a small price to pay for the Gran Coupe’s gorgeous lines and besides, you’d never find me back there for any longer than needed to test the rear seats out anyway. For me, the 4 GC is a much prettier 3 Series GT liftback combined with a much more livable 4 Series Coupe. Here’s hoping the 4 Series Gran Coupe lives a long and prosperous life.
©(Copyright Canadian Auto Press)
Car Shopping Tools