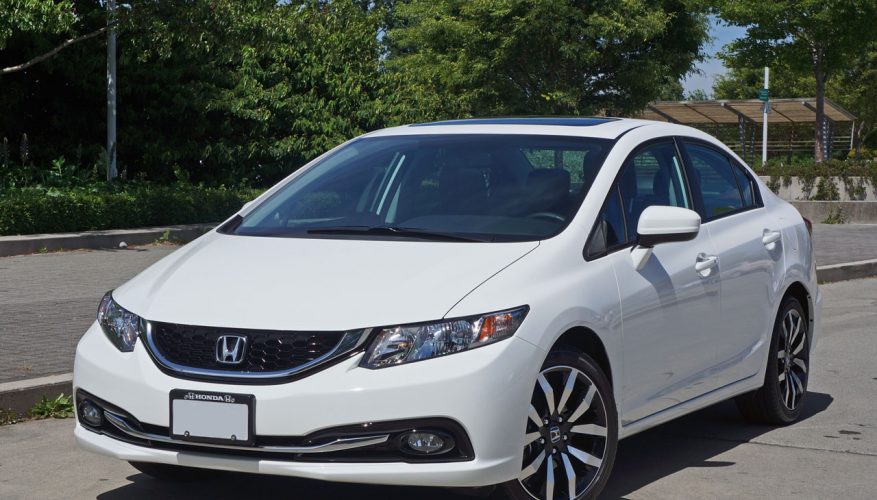 By: Trevor Hofmann
Look out onto any street in any city the world over and you’ll likely see a Honda Civic. Here in Canada, where the compact model achieved best-selling car status last year with 66,057 examples down the road despite sales that were significantly lower than 2008 when it found 72,463 buyers, you’ll see multiples at any given moment. Ditto in the US where Honda came close to selling 326,000 Civics in 2014.

To be clear, Civic sales statistics include the rakish two-door Coupe that I tested earlier this year and this handsome four-door I spent a week with recently, both surprisingly similar in feel and features respective of trim, if not exterior styling. It’s certainly easy enough to see that they’re from the same family, but since its early refresh for the 2013 model year Honda has gone with a downright stately chrome-adorned look for the Civic Sedan, whereas it has totally muscled up the latest Coupe.

Yes, the Civic Sedan is one classy looking little ride, especially in as-tested Touring trim. The latter incorporates an attractive chrome-rimmed black mesh grille above a narrow lower grille slot filled with a chrome strip that mimics the upper grille’s look as it reaches outward toward a sweet looking set of oval fog lamps, while in back fabulous jeweled taillights are visually connected by a thick strip of chrome running the lip of the trunk, the front and rear designs coming neatly together within an overarching shape that’s long been aerodynamically sleek. My Touring model’s 17-inch alloy wheels look sharp with their machine-finished spokes and outer rims plus glossy black painted pockets, but unlike others in the upper echelons of the compact class this top-line Civic is oddly missing LED driving lights and turn signals integrated into the mirror housings.

Honda never was a company that followed fads, but then again while these two features help make an entry-level car appear like something from the premium class they also enhance safety, making your car and turning intentions more clearly visible to other drivers. And safety isn’t something Honda takes lightly, this Touring model kitted out with one of my favourite safety features yet, Honda’s exclusive LaneWatch blind spot display that also comes standard in EX and Si trims. LaneWatch displays passenger-side rearward real-time video on the infotainment screen when the right turn signal is clicked into position, completely eliminating the car’s blind spot to make lane changing a lot safer.

Of course the Civic gets all of the usual standard safety equipment most others in this class offer, such as ABS-enhanced brakes with electronic brake-force distribution and emergency brake assist, traction and stability control, hill start assist, and a full load of airbags, while EX models and above feature the HondaLink Assist automatic emergency response system as well. It’s nice to know you’re well protected, Honda having long been a safety leader with one of the first advanced protective passenger cell systems offered, now dubbed Advanced Compatibility Engineering (ACE) II body structure. The result is Top Safety Pick status from the US Insurance Institute of Highway Safety (IIHS) and the highest rating of 5 Stars from the US National Highway Traffic Safety Administration (NHTSA). Stiff and strong yet lightweight construction that’s designed to absorb just the right amount of impact to protect driver and passengers during a crash is especially comforting when considering how easy it is to go quickly in the Civic.

That’s another longstanding Civic trait, performance. Of course this Touring model isn’t as thrilling to pilot as the superb Si, one of my favourite cars to drive period, but it’s nevertheless plenty enjoyable, balancing an agile chassis and plenty of power with impressive comfort levels, quiet operation and a very smooth ride. The Civic’s suspension is fully independent with struts up front and a multi-link setup in back plus stabilizer bars at both ends, its motion-adaptive electric power-assisted rack-and-pinion steering delivering better than average feel along with nice reactive turn-in. Braking is strong too, especially in EX models and above that receive standard rear discs, my tester fairing surprisingly well after repeated stomps during a high-speed run down a steep mountainside grade.

While capable through curves and confidence inspiring at high-speed on the highway, the Civic is effortless to drive around town. Its optional continuously variable transmission is ultimately smooth and makes the most of the 16-valve, SOHC, 1.8-litre, i-VTEC enhanced four-cylinder’s 143 horsepower and 129 lb-ft of torque, not the most powerful engine in its class but legendary for reliability (Honda occupies second spot amongst mainstream volume brands in the 2015 JD Power and Associates Vehicle Dependability Study and is better than average in the 2015 Initial Quality Study) and, with standard Eco mode engaged and attentive to the Eco Assist system, extremely efficient with a five-cycle EnerGuide fuel economy rating of 7.9 L/100km in the city, 6.1 on the highway and 7.1 combined. While the CVT is standard in Touring trim, Honda offers the Civic Sedan with a five-speed manual in all trims below, which improves performance yet doesn’t do quite as well at the pump with an 8.6 city, 6.6 highway and 7.7 combined rating.

No matter the trim, the Civic offers up a very impressive interior, but when you order it in Touring guise it comes pretty close to premium quality. A nicely padded soft-touch insert ahead of the front passenger looks and feels upscale, while Honda uses the same material for the front door uppers, a nice complement to the stitched leather seat upholstery. It’s a luxurious compact sedan, but Honda has made sure this top line Civic doesn’t compete directly with the premium-branded Acura ILX that shares its underpinnings. For instance, the Civic Touring is devoid of fabric-wrapped roof pillars, while there’s no powered passenger seat, driver side memory, heatable rear seats, ventilated front seats, not to mention a whole lot of other features that you’ll find in the premium set (and a few direct competitors within the mainstream compact class), and its leather upholstery isn’t quite as supple and soft as the ILX’ hides. It does have automatic climate control with air-filtration mind you, but not dual-zone, while the front seat heaters are only two-way adjustable. Proximity sensing entry and pushbutton start are important for this class and thankfully included, the red start/stop button an especially nice touch, and an HDMI slot joins the usual USB plug for wiring up your peripherals to the impressive entertainment system.

You’ll be impressed with the infotainment system’s touchscreen display, as the colours are bright and resolution clear and crisp while all the graphics are modern and attractive. The Touring, which starts at $25,550 plus $1,495 in freight and pre-delivery prep charges, includes navigation and an excellent multi-angle back-up camera with dynamic guidelines, as well as the blind spot lane change camera I mentioned earlier. Many features from lower trims get grandfathered up to the Touring model too, such as the $15,750 base DX model’s folding powered side mirrors, halogen headlamps with auto-off, tilt and telescopic steering, powered windows, AM/FM/CD/MP3 audio system with auxiliary input, and multi-functional centre console storage, while $18,550 LX trim adds body-coloured door handles, body-coloured heated side mirrors with an expanded view driver’s mirror, illuminated steering wheel-mounted audio controls, HandsFreeLink Bluetooth phone connectivity with streaming audio, text message functionality, a TFT multi-information display, heatable front seats, and an exterior temperature indicator.

EX trim that sits just below the Touring model and starts at just $20,950 plus freight, adds many of the items already mentioned including proximity access and pushbutton start, the high-definition display audio system with rearview camera, plus the USB and HDMI connectors, while additional features pulled up from the EX model include body-coloured mirror pedestals, auto-on/off headlamps, speed-sensing variable intermittent wipers, a leather-wrapped steering wheel, two tweeters for the audio system, Siri Eyes Free compatibility, and a powered moonroof. Touring trim items not already covered include an extremely comfortable eight-way powered driver’s seat and satellite radio.

Those comfortable front seats are bolted into a commodious forward compartment, the Civic ergonomically ideal for most body types. Rear seat roominess is about average for the class, but the comfort level of each outboard position is uncommonly good with ample lumbar support, rare for any class. A nice flip-down armrest with two cupholders adds yet more comfort and convenience when three’s a crowd, and the seatback is split 60/40 allowing room for four plus everyone’s skis, poles, boots, gloves, toques, parkas, extra long underwear, après skiwear, and more through the large pass-through and within the 353-litre (12.4 cubic-foot) trunk.