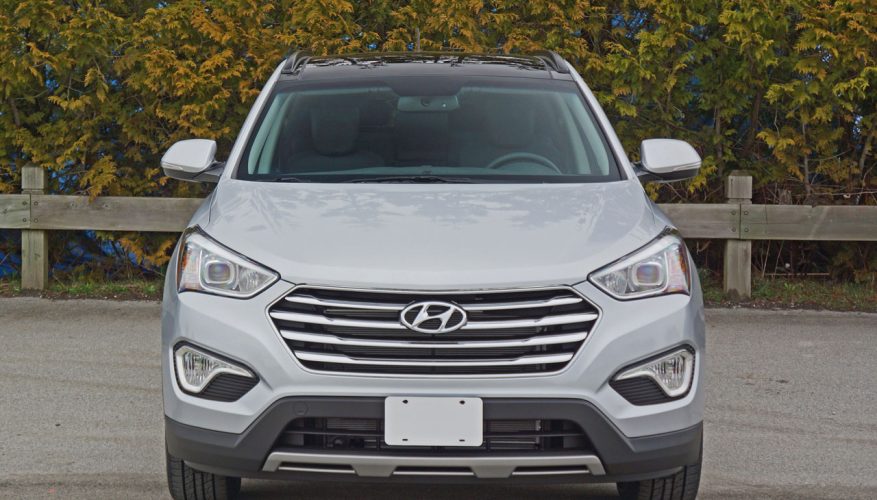 By: Trevor Hofmann
Hyundai certainly does things differently than most auto manufacturers in some key segments, especially when it comes to crossover SUVs. The Tucson is a true compact, yet the regular five-passenger Santa Fe Sport is slightly shorter than most mid-size models and even some compacts, albeit wider than all compact models in the mainstream CUV sector. Being different than the status quo doesn’t always work to an automaker’s advantage, but Hyundai has nevertheless found a nice niche that has its Santa Fe achieving impressive sales numbers.

In 2014 the five-passenger model found 27,580 Canadian buyers, whereas the larger seven-occupant Santa Fe XL added another 4,894 owners to Hyundai’s SUV camp for a total of 32,474 down the road. Along with the little Tucson’s 11,856 sales, Hyundai’s CUV tally came to 44,330 units last year. In comparison, Chevrolet sold 21,298 Equinox compacts and a mere 3,886 seven-passenger Traverse models for a total of 25,184 during the same period, whereas General Motors’ GMC brand found 11,524 buyers for the Terrain compact and 5,973 for the Acadia; the pricier seven-seat Buick Enclave selling to just 3,528 customers. That’s five models within three GM brands just to barely inch sales past Hyundai’s two (plus one) model crossover lineup, the Korean automaker outselling Chevy and GMC’s combined crossovers by a couple of thousand, and that’s not even including its Kia subsidiary that accounted for 20-plus-thousand units in 2014. I could go on and on listing sales numbers from Dodge, Ford, Honda, Kia, Mazda, Nissan, and Toyota, but the story is always the same. The five-passenger Santa Fe outsells Ford’s comparable Edge and the seven-passenger Santa Fe XL obliterates the Flex. Ditto for Dodge’s Journey, Honda’s Pilot, Kia’s Sorento, Mazda’s CX-9, Nissan’s Pathfinder, and Toyota’s Highlander, the one-two Santa Fe punch being a powerful combination that obviously works well for a lot of Canadians.

Of course success doesn’t happen by chance. Anytime a particular model experiences strong sales it’s usually due to a number of key elements done right. One look at the Santa Fe is all it takes to know its exterior design works, the bold chromed truck-like grille, the sophisticated headlamp design, elegant chrome detailing around the uniquely shaped fog lamps, not to mention surrounding the windows, door handles and rear garnish. In the case of the seven-passenger XL, it’s not only longer than the five-passenger Sport, but it’s shaped differently from the rear with a totally unique rear quarter window, a more upright roofline, a revised liftgate with completely redesigned taillights wrapping around each corner, plus a reworked bumper underneath. Seen from their hind ends they’re two distinctively individual crossover SUVs, whereas from the front it’s much easier to tell that these two are fraternal twins.

Likewise, inside they’re mostly identical from the second row forward, which for the most part is a very good thing. I say “for the most part” because it’s a truly impressive family hauler other than the infotainment interface found in lower- and mid-range trims, which when compared to more recently updated competitors is lacking in size, colour and resolution quality, not to mention features. You’ll need to buck up for Limited trim to get larger, high-resolution, full-colour display audio, that model receiving an eight-inch touchscreen also incorporating navigation and a back-up camera, whereas the Santa Fe XL Luxury trimmed model I tested, the Premium trim just below, and the base model simply named FWD all come with a throwback 4.3-inch touchscreen display, also integrating a back-up camera, but due to its size not that easy to distinguish details when reversing.

This will be a moot issue for many, as the smaller display audio system will be more than functional enough for the majority of late 30- to 40-somethings buying into this seven-passenger class of SUV. This demographic includes big time tech shoppers equipped with the latest large screen smartphones, and therefore navigation is hardly needed when Apple or Google maps are just a touch away. On this note I hope that Hyundai (and the other automakers that don’t already allow navigation and additional phone apps to be displayed on their infotainment screens) takes this into consideration when upgrading their infotainment hardware, because most of us would rather use the smartphone app we’ve already paid for within our vehicle’s larger display via Bluetooth streaming than be forced to spend more on unnecessary integrated GPS, but I digress.

Infotainment aside, the Santa Fe XL Luxury model I tested was as nice as volume sector crossover SUVs come. Truly, climb up into its luxurious interior and you’ll be able to see and feel for yourself. Hyundai not only covers the dash-top with a rich soft-touch synthetic, something some premium competitors don’t even do, which is nice to the touch and sound absorbent, but wraps that premium material down the face of instrument panel too, while both front and rear door uppers get the pampered treatment to make sure windowsill resting elbows are protected. The door inserts are soft and padded too, with a leather-like material that’s only upstaged by the beautifully detailed contrast-stitched and satin silver metallic-trimmed leatherette armrests. Silver trim highlights the dash and other key surfaces as well, while the faux gloss woodgrain trim that runs across the instrument panel looks like the real deal.

The new items listed increase the Luxury model’s price from $39,899 last year to $40,499 this year, plus $1,795 for freight and pre-delivery prep, but $600 seems a small price to pay for these convenience and safety upgrades. At the time of writing (yes, literally during the multi-hour process of writing this review) the price of 2015 models went down on Hyundai Canada’s retail website, so you can now purchase the same model for $39,749, less another no-haggle discount of $1,422 for a revised price of $38,327. The value keeps piling on.

Moving the smart key system down one trim level means that top-line Limited pricing only increased by $300 due to the new active safety gear, which up until a few hours ago was set to $43,599 plus freight, but is now just $43,099 less a $1,536 no-haggle discount, resulting in only $41,563. Limited trim includes all of the Luxury model’s features except for those improved, such as the eight-inch touchscreen infotainment system with navigation I spoke of before. That bigger interface makes for a nicer audio display, all the better to enjoy the upgraded 10-speaker Infinity sound system with its 12-channel external amplifier, while the driver will appreciate a crystal clear Supervision primary gauge cluster infused with a 4.2-inch TFT LCD multi-information display set between the tach and speedo, plus ventilated front seats, attractive brushed metal door scuff plates, auto-leveling HID headlights, LED taillights, and 19-inch alloys on 235/55R19 tires.

If seven’s a crowd and six seats would serve you better, a mere $200 will decrease seating capacity and increase second-row comfort with two captain’s chairs replacing the stock bench, this feature available for both Luxury and Limited trims, whereas the latter can also be had with gorgeous Saddle Leather upholstery, also priced at only $200.

Along with all this premium-level goodness is a very accommodating and comfortable interior as long as you’re seated in the first two rows, being that par for the course in this class the third row is best left for smaller adults or kids. Passenger and cargo flexibility is better than many in this class, however, thanks to a 40/20/40 split second row that really helps optimize space. The third row splits in the usual 50/50 configuration allowing the 383-litre (13.5 cubic-foot) cargo hold behind to expand up to 1,159 litres (40.9 cubic feet), whereas a total of 2,265 litres (80.0 cubic feet) of what-have-you can be stowed when both rear rows are laid flat. There’s also 51 litres (1.8 cubic feet) of hidden storage below the cargo floor, handy for keeping valuables from prying eyes.

The larger XL comes standard with Hyundai’s 3.3-litre V6, but with this in mind I could certainly see some families wanting the gutsy 2.0-litre turbo offered in the Santa Fe Sport despite the larger SUV’s added weight. The compact direct-injected four-cylinder makes a heady 265 horsepower and 269 lb-ft of torque, which is actually more total output than offered by some of the competitive seven-passenger utes I commented on earlier let alone more twist than the XL’s V6, while fuel economy would likely be better, but no doubt Hyundai knows more about its customer base than I do and therefore the six-pot mill is the only engine on offer, its 290 horsepower and 252 lb-ft of torque amply suited to the many jobs at hand.

A manual-mode capable six-speed automatic driving all four wheels is also standard, not to mention Hyundai’s Active Eco system that when activated allows for a five-cycle EnerGuide fuel economy rating of 13.0 L/100km in the city, 9.7 on the highway and 11.5 combined, which is very good for the seven-passenger class.

All of this V6 power results in a crossover that pulls strongly from standstill and performs highway passing maneuvers effortlessly, while the six-speed auto is as wonderfully smooth as the big ute’s comfortable ride. Granted the XL isn’t as sporty as the smaller Santa Fe Sport, although it handled better than I expected, tracking well and turning in quite crisply. Still, I can’t see most buyers in the seven-passenger crowd driving it like I tested it. They’re more likely to use it as it was designed, for daily errands, weekend sports and family activities, or towing the boat to the local ramp and camp trailer to Jellystone on summer vacation. For these latter activities keep in mind the Santa Fe XL is rated at 2,268 kilos (5,000 lbs) when equipped with trailering brakes, which should be more than ample for most active families’ needs.

In fact, the entire Santa Fe XL fully lives up to that last “more than ample” attribute. It’s an impressive vehicle all-round, delivering good performance, loads of space, an upscale interior with plenty of features for the dollars asked, and on that last note a great base price starting at just $29,999 before applying the no-haggle discount of $1,089, resulting in a new low of $28,910. That base price will go up for 2016, but only to $30,449 which is actually lower than this year’s previous starting price of $31,299, while there doesn’t seem to be any changes to next year’s model, so enjoy the discounts on a 2015 or find exactly the features you want on an already discounted 2016. Either way you’ll end up a winner because the Santa Fe XL is a superb crossover SUV that deserves its strong sales success.
©(Copyright Canadian Auto Press)
Car Shopping Tools