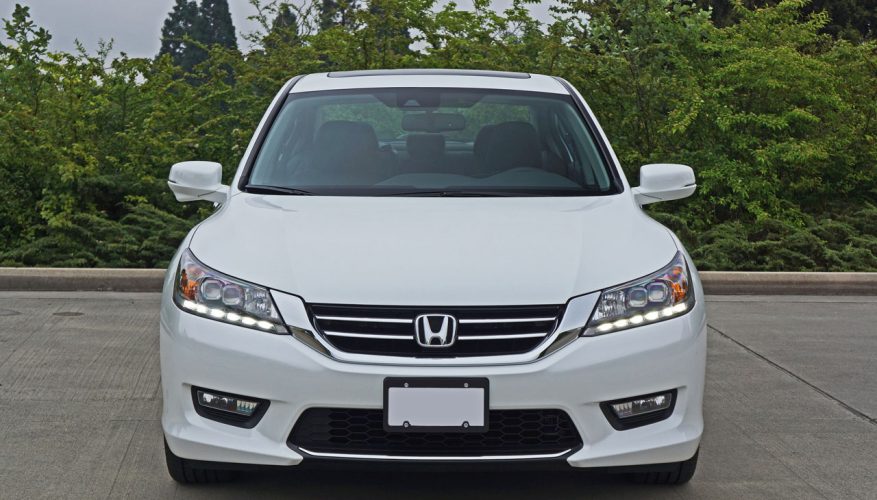 By: Trevor Hofmann
Every time I get behind the wheel of a Honda Accord I’m immediately reminded of just how good it is, not to mention how far the auto industry has come in the last decade. I’ve long appreciated the Accord for its excellent driving dynamics, understated good looks and accommodating, feature-filled, high-quality cabin, but with each new generation this class leader gets better and better, this latest iteration coming as close to a premium-level four-door sedan as anything in its class.

While I’m tempted to begin this review by detailing all the soft-touch synthetics surfacing the interior or the impressive dual-screen infotainment system, not to mention the comfortable leather-clad and contrast-stitched seats, it was the fabulous sounding snarl escaping the engine bay that made me question my surroundings. Such a sultry sound emanating from the depths of a common family sedan is unusual to say the least, and my Touring V6 trimmed tester was certainly no sport model. Luxe as it was, at full throttle the 3.5-litre beast lurking behind this Accord’s chrome-clad grille was more exotic NSX than prosaic four-door, Honda letting it’s racing roots take hold, even in the rank and file Accord.

In Canada, mind you, the Accord isn’t exactly a prole. Rather, our working class is more likely to buy into the compact Civic, and do so in hoards. The larger four-door sedan sells at a much lower rate with only 16,962 units delivered in 2014, which makes for almost 50,000 fewer Accords driving away from Canadian dealerships last year than Civics. In the US, where mid-size sales have been slipping, it’s still a completely different story. The Accord outsold the Civic by a whopping 62,393 units, the mid-size model garnering 388,374 sales and the smaller one only 325,981. Yet still, the take-rate is much more even. Alas, what lower fuel prices and more expendable income can allow.

Rather than begrudge our American friends for their seemingly more fiscally advantageous lifestyle (at least temporarily, ahead of that USD$18 trillion national debt catching up to them), we can be grateful for their collective purchasing power making a car like the current Accord possible. Without their close to fanatical mid-size sedan following paving the way we Canadians wouldn’t have opportunity to gravitate upwards from our Civics into what is a comparatively rarified near-luxury sedan segment filled with some impressive iron that really should be honoured instead of made the brunt of misguided jokes as the class often is. In this crowded segment there’s but one sales leader, and last year it wasn’t the Camry that took top honours, as was by far and away the case south of the 49th, but rather this very Accord, by a significant 933 units I might add. We obviously like our four-door sedans sportier.

Along with the soul-stirring sounds emanating from engine compartment and exhaust pipes, the optional six pulls the Accord forward with the same go-fast attitude, its 278 horsepower and 252 lb-ft of torque delivering spirited performance while torque steer isn’t an issue at all. With a focus on efficiency, the 24-valve, SOHC, i-VTEC-enhanced engine deactivates a bank of cylinders when going light on the throttle via Honda’s Variable Cylinder Management system, a process that, together with its standard ECON mode button engaged, helps the car achieve a commendable 11.0 L/100km city, 6.8 highway and 9.1 combined five-cycle EnerGuide fuel economy rating using cheaper regular fuel, and that’s without the use of the base engine’s optional continuously variable transmission, but a more positive feeling conventional six-speed automatic transmission with Grade Logic Control.

The autobox runs through gears quietly and quickly when its shift lever is pulled all the way back to S mode, and while a hands-on mode would be welcome, this gearbox does a pretty good job of holding a selected gear during assertive driving. Those wanting to control their own destiny by flicking the shift lever to change gears or, better yet, tug on steering wheel paddles will ironically be forced to downgrade to the base engine and CVT, the top-line gearbox integrating the intelligent Sport mode just mentioned, that’ll do quick shifting on your behalf but won’t allow such DIY behaviour.

I spoke of excellent driving dynamics at the beginning of this review and the latest 2015 model is no exception to this longstanding Accord attribute, the car’s independent front strut and multi-link rear suspension with stabilizer bars at both ends, not to mention a strut tower brace under the hood, resulting in agility through the corners that’s noticeably more athletic than the class leaders its up against, yet an ease of operation through town that makes it one of the easiest cars to drive available. Its electric power-assisted rack-and-pinion steering is nothing new in design, but its setup feels more responsive to turn-in, no doubt partly due to my Touring trimmed tester’s 235/45R18 all-seasons on beautifully finished blade silver diamond machined face alloys. Behind those rims a stock set of power-assisted ventilated front discs and solid rear rotors took care of braking with good effect, aided by four-wheel ABS, electronic brake-force distribution and emergency brake assist, standard across the Accord line. Also standard, tire pressure monitoring made sure the ideal contact patch maintained optimal handling and braking conditions, while Vehicle Stability Assist with traction control kept control on slippery road surfaces. Hill start assist is also standard, while the Accord comes fitted with all the expected airbags too. Additionally, EX-L models and above feature Lane Departure Warning and Forward Collision Warning, the systems working faultlessly during my weeklong test.

Exclusive to Touring trim, which will set you back $35,630 plus $1,695 in freight and pre-delivery prep charges, my loaner also included LED daytime running lights and sweet looking ultra-bright projector-beam LED headlights, plus satellite-linked navigation with 3D map display, bilingual voice recognition, FM Traffic, 16-gigs of hard disk audio storage, and a HomeLink universal garage door opener. Along with these features, the Touring V6 acquires a long list of features that are grandfathered up from lower trims, a favourite being Honda’s exclusive LaneWatch system that upon deploying the left turn signal displays a rearward view of your blind spot on the infotainment screen via a camera located under the passenger-side mirror. The infotainment system is eight inches in diameter, full-colour and high-resolution, controllable via a rotating dial within easy reach of the driver and front passenger, and filled with additional features such as HondaLink phone connectivity with email and text message functionality, plus a great sounding 360-watt AM/FM/CD/MP3/WMA/satellite audio system with seven speakers including two tweeters and a subwoofer plus auxiliary and USB jacks, all accessible via steering wheel controls.

The steering wheel is leather-wrapped with a tilt and telescopic column, the extremely comfortable eight- and four-way powered driver and front passenger seats plus the roomy rear seat upholstered in perforated leather, the driver getting memory settings while all four outboard positions receive heatable cushions, plus a rear centre armrest with integrated cupholders can be found in back, as well as rear heater ducts and rear ventilation for true comfort all-round.

Back up front, a powered glass sunroof is controllable via an overhead console that also houses an auto-dimming rearview mirror just ahead and a handy sunglasses holder right behind, the aforementioned garage door opener in between with reading lamps at each side, while the driver also benefits from body-coloured heated power-adjustable side mirrors integrating turn signals and an expanded-view driver’s mirror, plus a multi-angle rearview camera, proximity-sensing access with pushbutton ignition, powered windows, dual-zone automatic climate control with air-filtration, auto-on/off headlights, one-touch turn signals, speed-sensing variable intermittent wipers, active noise cancellation, active sound control, fog lights, LED taillights, a chrome grille, chrome door handles, a dual exhaust system with chrome finishers, and just above these a large 439-litre trunk made yet more accommodating via a fold-down rear seatback.

This is where I get to complain, as the Accord’s competitors offer split rear seatbacks so you can still bring along one or even two rear passengers while carrying longer items, such as skis. The Honda mid-sizer’s single seatback opening isn’t all that large either, all resulting in a low passenger/cargo flexibility score.

Of course no car is perfect, and if it weren’t for this oversight I’d be left with nothing to gripe about at all, instead going on at length about the Accord Touring V6’s attractive silver satin, glossy black lacquer and matte wood accents tastefully applied throughout the cabin, high-quality switchgear, and so on, which would be a lot more boring for you to listen to than this car ever is to drive. I can’t help but laugh when people casually shrug off the entire mid-size sedan lot as practical family haulers or mere comfortable commuters. Truly, they’re doing themselves a disservice, because the Accord is a superb driver’s car too, while it’s downright luxurious in the higher trims. If you already drive an Accord, be proud. It’s a great car. If you don’t, consider it seriously.