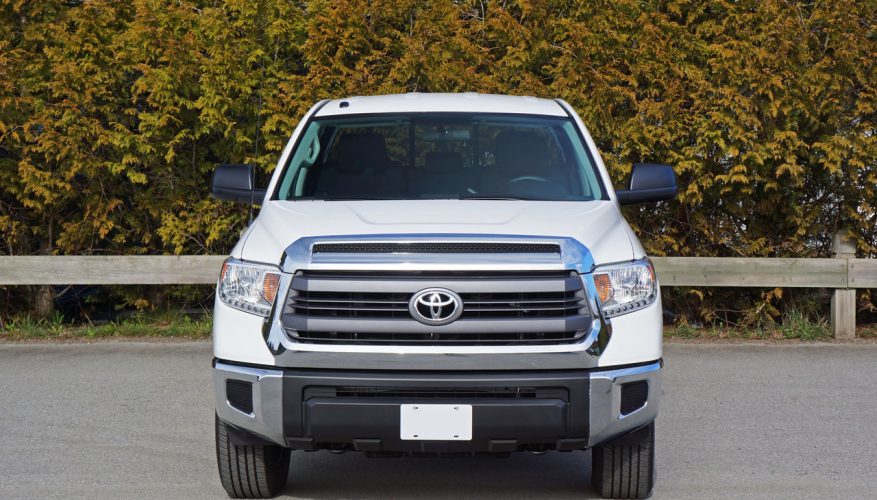 By: Trevor Hofmann
Just try to find a bolder, badder looking pickup truck. The Tundra’s got more big rig presence than the Ram, at least since Toyota refreshed its second-generation design last year. Its grille is now larger than ever, pushing out so far to each side that its large LED infused headlight clusters seem somewhat small in comparison, while it butts right up against the rugged looking chrome-capped bumper just below and wraps all the way over the edge of the raised hood above, while tougher looking front and rear fenders meld into a revised rear end design featuring new taillights bookending a reworked tailgate with an integrated spoiler. A thorough update, only the cab’s body panels remained the same, and there’s absolutely nothing subtle about it, important if the Tundra wants to attract more buyers away from the Big 3 while maintaining its sizable lead over its lone Japanese competitor.

In the “light” truck segment, which this half-ton model falls into, towing and hauling capabilities are critical, not just because they result in a more functional truck that can take on any job you throw at it, but also for bragging rights. Street cred matters as much on the job site as it does in the campsite, and Toyota made a lot of waves when it ran a series of impressive TV ad stunts, one dubbed "SEE-SAW" in which the truck with a trailer in tow ran up a steep ramp that seesawed at its axis causing an identically steep downward grade, the driver hitting the brakes near the end to show just how quickly the 10,000-lb GVWR twosome could be stopped, an impressive sight; another called "Killer Heat" showed the Tundra towing a heavy load up a spiraling ramp of flames in scorching 257.1 temperatures only made worse by the Mojave Dessert’s already overwhelming sun overhead; and probably the most notable was the "Let’s Go Places" ad in which the Tundra actually took part in the much publicized overnight haul of the 150-ton decommissioned Endeavor space shuttle through the streets of Los Angeles in October of 2012. There have been others, and each has shown just how capable and downright tough the Tundra is, just in case that Freightliner sized grille didn’t already have you at hello.

On the negative, climbing into the Tundra’s box is no easy feat if you’re getting up in years or just simply not as agile as a teenager. The only step I could easily reach is at the centre position of the rear bumper, which hardly helps if the tailgate is down. Toyota should think about adding corner steps to the rear bumper like some of its competitors, or something similar to the optional pullout step hidden within the F-150’s tailgate. Offering pop-out side steps for accessing loads from the side would be helpful too. The Tundra does include a nice soft-lowering tailgate, however, a more refined process than those that still let their tailgates slam down with a loud thump.

The top Tundra capacities mentioned a moment ago are for the Regular Cab 4×2 model, incidentally, a truck that’s mostly purchased by fleet managers for work purposes. The Tundra comes in three body styles, the third being the largest CrewMax version with four regular-length doors, the Double Cab getting a second set of abbreviated back doors, although they’re not the inconvenient rear-hinged types that make it difficult to get passengers in and out of in tight parking spots. Toyota neatly integrates a set of vertically aligned body-colour door handles into the rearmost edge of each door, which appeared almost invisible on the Alpine White Tundra I was driving, probably due to its matte black front door handles sticking out like sore thumbs. This is par for the course in this more basic class of pickup truck, and as you’ll soon find out, better than rivals within the same price range.

The Double Cab model can be had with 4×2 or 4×4 drivelines, mine featuring the latter, while its exterior was dressed up with a chromed grille surround instead of the base black, plus chromed front and rear bumper end caps, rear privacy glass with a manual sliding rear window, and SR5 badging, while remote keyless entry gets you inside where footwell lighting lets you know you’ve got wall to wall carpeting instead of rubber floors, plus carpeted floor mats, chrome vent trim, powered windows, cruise control, a seven-inch display audio system, variable intermittent wipers, illuminated vanity mirrors, and a rear bench with underseat storage. It’s a nicely packaged truck for $37,750 plus $1,730 for freight and pre-delivery prep, the Tundra’s current value proposition another one of the reasons its sales have picked up recently.

Price out a Chevrolet Silverado with similar features and you’ll quickly pass by the $40k threshold ($37,445 plus freight only buys you a Double Cab 4×4 in WT (Work Truck) trim with rubber floors and V6 power); the GMC Silverado Double Cab 4×4 starts at $38,095 and isn’t as well equipped as our Tundra. You’ll need to go with a similarly basic XL model if you want the Ford F-150 to come anywhere near this Tundra’s price, or if you equip it similarly in XLT SuperCab 4×4 V8 trim it’ll set you back $39,799 plus freight. The Ram 1500 is the only truck that’s competitive, albeit its V8-powered Quad Cab 4×4 SLT model is still pricier at $37,790 plus freight. If we dig deep and go feature for feature there will be some pros and cons to each of the trucks on offer, but just scratching the surfaces shows that the domestics don’t include limited slip rear differentials at these prices whereas the Tundra does, and some of their interiors are not as nicely laid out in this lower end range.

A look around the Tundra SR5 shows off a truck that’s nowhere near as base looking as its price suggests, with attractive chrome and satin silver detailing brightening up the steering wheel spokes, instrument panel and door trim, not to mention a splash of black lacquer plastic around the infotainment interface. The primary gauges are great looking and easily legible no matter the outside light, plus feature a high-resolution 3.5-inch TFT multi-information display at centre for accessing distance to empty, elapsed time since start, average speed, settings, average fuel economy, current fuel economy and more, all controllable via a “DISP” button on the right lower steering wheel spoke, with more detailed analysis capable from the handy multi-directional toggle switch on the left spoke. Just below that is a button for audio mode whereas a volume toggle rests on the lower spoke further down, while a voice activation button along with a switch for answering or hanging up your Bluetooth connected phone is on the right side.

Now that we’re talking tech, the display audio system mentioned earlier features an integrated backup camera system as well, which proved wonderfully helpful when reversing into a tight parking spot, while a well laid out HVAC interface incorporates three very large rotating knobs that are ideal for using with winter gloves. Just to the left is a large rotating knob with a premium-like rubber grip for selecting 2H (two-wheel drive high), 4H or 4L for tackling the truly rough stuff.

As those familiar with Toyota can easily imagine, any Tundra with four-wheel drive can easily scale a rocky embankment, trudge through knee-high mud or snow, wade through the same depth of water, or overcome any number of other obstacles that might cross its path while off-pavement. Toyota’s 4×4 expertise is legendary, with the Tundra backed up by decades of FJ Cruisers, 4Runners, Sequoias and of course Land Cruisers on our shores, not to mention the class-leading compact/mid-size Tacoma, as well as Hilux, Fortuner, Prado and other Toyota pickups and SUVs sold around the globe, there’s no more experienced 4×4 builder than the Aichi, Japan-based automaker.

My time with this particular Tundra was spent on the road, however, where it performed as flawlessly as every other Tundra I’ve had the pleasure of driving or riding aboard. Toyota balances comfort and performance well, both benefiting from a double-wishbone front suspension setup with coil springs, gas shocks and a stabilizer bar, plus heavy-duty multi-leaf springs with bias-mounted gas shocks in the rear. Handling is excellent for the class, while standard traction and stability control make sure both ends stay in check when the road gets slippery.

If you want even better handling on pavement or off the beaten track Toyota will be only too happy to suit up your Tundra with a TRD Offroad Package that gives you enhanced damping via Bilstein shocks, plus more.

The stock braking system should be all that’s needed to haul the Tundra from highway speeds to standstill in short order, even when its carrying a heavy payload or towing its maximum trailering weight, due to big 13.9-inch ventilated rotors and four-piston calipers up front and nearly as large 13.6-inch ventilated discs in the rear. Of course they’re ABS-enhanced with electronic brake-force distribution and emergency brake assist, while the Tundra also gets eight standard airbags including two inflatable blockers for the driver and front passenger’s knees.

That 4.6-litre engine I mentioned before makes a sizable 310 horsepower and 327 lb-ft of torque, due in part to Dual Variable Valve Timing with Intelligence (VVT-i) while its response off the line benefits from Electronic Throttle Control with Intelligence (ETCS-i). It’s mated up to a smooth-shifting six-speed automatic transmission. The 4.6 gives ample torque at takeoff and more than enough passing power, the 5.7 only required if you’re pulling extremely heavy loads.

This particular Double Cab SR5 model is a six-passenger vehicle, making it ideal for family or work duty, although when only two occupy the front bench its middle section folds down exposing a large centre console that houses two big cupholders and some small compartments that are really handy. Drinks in mind, a set of flip-down cupholders are fitted to the backside of the front console for rear passengers, but these are hard to reach. When no rear passengers are aboard you can flip the lower cushion of the split rear bench upward for added cargo room, my tester kitted out with an optional storage box.

If want that rear underseat storage system standard and also prefer front bucket seats with a console-mounted shifter and front centre console box in between, along with a few more luxuries like an eight-way powered driver’s seat with powered lumbar support, four-way adjustable front passenger’s seat, and telescopic steering to go along with the as-tested tilting column, plus more style via fog lamps and 18-inch alloy wheels, not to mention some extra convenience from a bed rail system and four tie-down cleats, you’ll need to opt for the SR5 Plus package that inches the Tundra Double Cab’s price closer to the $40k mark at $39,690. Of course you can go higher with the addition of the TRD Offroad package I mentioned earlier, the more powerful 5.7-litre V8, a larger CrewMax cab, or Limited and Platinum trims. Variety is the spice of life, so if your budget allows you can opt out a Tundra almost any way you like.

There’s little to dislike about the new 2015 Toyota Tundra, this Double Cab 4.6-litre 4×4 SR5 model perfectly suited to work or play while priced much more competitively than its equivalent peers. That it just happens to look a lot tougher than its competitors doesn’t hurt matters either.
©(Copyright Canadian Auto Press)
Car Shopping Tools