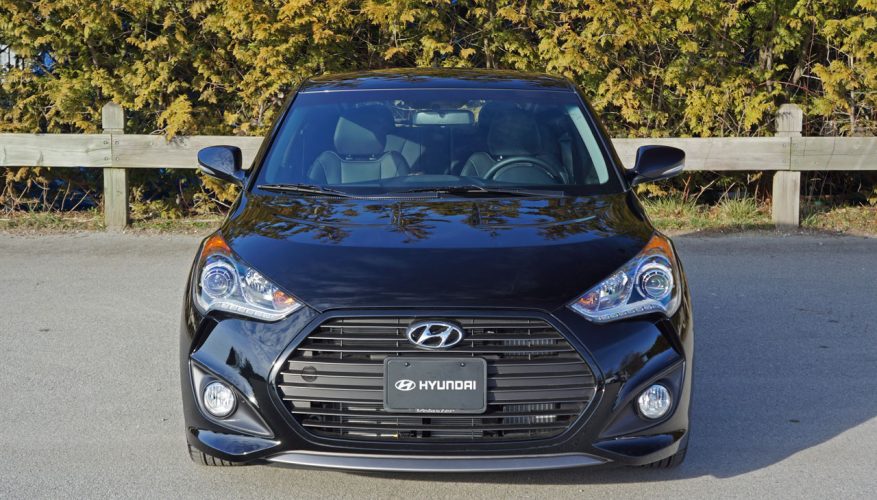 By: Trevor Hofmann
We’ve all got to celebrate brave designs in the auto industry, and Hyundai has had a number of them over the years. Some haven’t exactly caught on with the masses while others have been mega hits, the Veloster straddling that line with fairly strong sales success for its compact coupe segment along with an ardent following of zealous believers.

It’s easy to see why some feel so passionate about it. It has the looks as well as something most sport coupes don’t have, practicality. With a grille that could make an Audi feel inadequate, especially in my tester’s top-line Turbo trim, beautifully detailed complex headlamps featuring cool integrated LED daytime running lights, an upright roofline that still looks rakish thanks to skillful rear styling incorporating a glass rooftop and tiny rear window only bisected by a high-mounted rear spoiler, taillights positioned high up on its rear haunches and one of the largest diffuser-style rear bumper caps offered anywhere, it’s a small car with big attitude. Sizable 18-inch five-spoke alloys flashing satin silver rims with chrome infused inserts that look like five-sided sunmudo throwing stars round out the Veloster Turbo package, a promise of good times to be had.

Gaze upon it from the driver’s side and the Veloster looks like a slightly irregular two-door coupe, but walk around to the passenger’s side and it’s an entirely different kind of animal, Hyundai having fused a rear door into the design for unique four-door coupe styling and much better access to the rear. It’s a real front-hinged door as well, not the usual pickup truck-type rear-hinged suicide door that requires the front door to be opened before rear passengers can climb inside or out. Just tug the door handle cleverly hidden in the rear portion of the window frame and voila, a reasonably roomy rear seat awaits.

That’s the practicality I was inferring to earlier. It’s plenty accommodating up front, not unusual for the sport coupe class, but space in the rear for real adults is a rarity that makes the Veloster a true four-person three-door, or four-door if you count the rear hatch. It opens nice and wide, again revealing more cargo space than you’ll likely expect from a compact coupe at 440 litres (15.5 cubic feet) behind the 60/40-split rear seatbacks and 982 litres (34.7 cubic feet) when both are lowered. Weekend getaways? No problem. There’s room aplenty even if three’s a crowd and skiing is in the cards.

Hitting the slopes would’ve been ideal, but alas very little snow during the majority of last season relegated such prospects somewhat into the future, but there are other ways to slalom as the Veloster Turbo quickly made clear. Those meaty 18s I mentioned earlier are just part of the go-fast package, as are the 215/40R18s they’re wrapped in, although the top-line model’s sport-tuned MacPherson strut front and torsion beam rear suspensions featuring 24 and 23 millimeter stabilizer bars at respective ends are identical to the base car. That’s not necessarily a bad thing as that entry-level Veloster handles curves with deft precision, and Hyundai beefs up the front brakes with 300-mm rotors from the base car’s 280 diameter, important for managing its 98-kilo (216-lb) increased mass, not to mention the extra speed capable from its much more powerful engine.

Behind its larger more aerated grille is a turbocharged version of the base car’s fabulous 1.6-litre direct-injected, 16-valve, DOHC four-cylinder with dual continuously variable valve timing, horsepower increasing by 63 ponies from 138 to 201, while torque not only gets a much needed 72 lb-ft raise from 123 to 195, but it comes on sooner in the rev range, from as low as 1,750 rpm compared to 4,850. If you mate the Veloster Turbo up with its optional paddle-shift actuated six-speed automatic, which was the case with my tester, the horsepower and torque spread is even wider at 69 and 75 respectively, which means that this more city-friendly version is plenty of fun when pushed to its limits.

That’s something the Veloster Turbo does very well. Press right foot to the floor and the audible machinations from behind the firewall, menacing metallic sound from the twin rear pipes, and inertia-adding rearward weight as body gets pressed into the VT’s well-bolstered sport bucket driver’s seat will wake you from day-to-day doldrums in an instant, full power arriving immediately with speed ramping up at a surprisingly quick scenery blurring rate. It’ll eat up a serpentine stretch of roadway as if it’s straight as an arrow, aided by its standard electronic limited slip differential, while those larger front rotors I just mentioned help bring all the fun to a quick halt even after repeated stomps, the VT a confidence inspiring sport coupe despite its diminutive size. Its increased frontal ventilation adds a tad to wind resistance, the sportier of the two Velosters achieving a 33 Cd instead of 32 for the base car, which certainly doesn’t impinge on interior wind noise, but likely adds to highway fuel consumption.

Compared to the base model’s 9.0 L/100km city, 6.7 highway and 8.0 combined five-cycle EnerGuide rating with the manual or 8.6, 6.6 and 7.7 results with its slightly slicker dual-clutch automated gearbox, the Turbo’s numbers equal 9.7 city, 7.0 highway and 8.5 combined with its six-speed manual or 9.9, 7.6 and 8.8 with its so-equipped torque-converted automatic, the thirstiest of its four drivetrains yet still very economical considering the performance at hand.

I’ve already mentioned how accommodating the interior is for four adults, but you’ve really got to take a ride inside to experience how far Hyundai has gone to keep owner and occupants satisfied in every other respect. Most surfaces not covered in gunmetal grey metallic, metal brightwork or piano black lacquer are done out in harder plastic, although it’s matte finished and really nicely textured. The dash top, for instance, gets a cool diamond pattern that also stretches right across the door uppers front and back, while just below, leather-like padded door inserts match the padded and stitched armrests for a comfortable and classy touch. The door pulls offer an extremely unorthodox yet very attractive design that looks fully dressed in their metallic surfacing that’s duplicated on the centre stack and unique support bolsters, brilliantly fitted with padded leatherette knee protectors.

Part of the appeal is the way each Veloster Turbo is outfitted. No upgrades are available other than the automatic transmission and availability of matte paint, which Hyundai interestingly separates out into a separate model appropriately given the Matte Paint suffix. After taking in the aforementioned styling upgrades, which other than the changes to grille and automatic LED-enhanced projector headlamps include a revised front fascia with twin circular fog lamps at each lower corner that match a set of red circular fogs surrounded by unique black bezels at the opposite end of the car, plus an exclusive body kit all-round, mirror-mounted turn signal indicators, a body-colour rear spoiler, two circular chromed tailpipes at the rear centre position instead of the twin rectangular ones used on the base car, and LED taillights, the Veloster Turbo also gets standard proximity-sensing access with pushbutton ignition, a tilt and telescopic heatable leather-wrapped multifunction steering wheel, a leather-wrapped shift knob, heatable and power-adjustable side mirrors, powered windows, heatable cloth sport seats with leatherette bolsters and six-way adjustability with powered lumbar support for the driver, leatherette armrests, alloy foot pedals, a seven-inch full-colour high-resolution touchscreen infotainment display with navigation, a rearview camera, Bluetooth hands-free, and an AM/FM/CD/MP3/satellite Dimension audio system with aux, iPod and USB inputs plus RCA jacks as well as eight speakers, a subwoofer and an external amp which delivers excellent sound quality with deep resonant bass tones that should appeal to buyers in the Veloster’s target market. A handy household-style 115-volt power outlet is also standard and useful for plugging in your peripherals. As good as the infotainment system is, and the car’s many other attributes, for some the highlight will be the standard panoramic sunroof overhead, a bonus day or night as it makes the car feel open and airy all the time, while others will appreciate the rear parking assist, necessary in a car that’s not quite as easy to see out the rear of as it is through the roof above.

Surprisingly the HVAC system is not automatic, but it certainly is functional with a big rotating centre dial allowing for a vertically laid out interface that matches the engine ignition button just below. Around the dial are multiple buttons that provide necessary functionality, everything set up in a nice tight package. Large buttons at each side control the two-way heatable seats, the highest position heating up fairly well. The Veloster Turbo’s best interior assets might just be the fabulously supportive front seats noted a moment ago, much thanks to excellent side bolstering. They hug butt and backside through fast-paced tight turns, keeping driver and front passenger securely in place, while their perforated inserts assure breathability even in hot summer weather. Their two-tone leather design is serious eye candy, uncommon in this class.

Of course all of these features are important for buyers in the performance coupe class, but its full suite of safety equipment allows for confidence when pushing the envelope, the list including standard ABS-enhanced four-wheel discs with electronic brake-force distribution and emergency brake assist, vehicle stability management, electronic stability control and traction control, plus the usual six airbags.

It’s difficult to knock a car as stylistically brave as the Veloster, and this top-line Turbo model takes the design up another notch while delivering strong performance and an impressive menu of standard kit for real value at only $26,399 plus $1,695 for shipping and pre-delivery preparation. At the time of writing Hyundai was showing a further $930 no-haggle discount on their website, making the VT even more approachable. The six-speed auto will only increase the price by $1,300, while matte grey paint with its special black and blue interior will add $1,000 to the bottom line, the no-haggle discount increasing to $1,006 when fully equipped. A total of six regular gloss colours are also available including the Ultra Black coating my test car, the others being Century White, Light Grey Pearl, Boston Red, Pacific Blue and Vitamin C orange, the metallics and pearl finishes at no extra charge.

That’s the kind of value we expect from Hyundai, and as anyone who has spent time with one of the Korean automaker’s latest products will attest, they’re not only selling on price anymore. The value proposition also includes leading edge style, above par performance, excellent fuel-efficiency, state-of-the-art engineering, the latest infotainment technology, impressive refinement, a high level of practicality and good reliability to make sure the love affair continues long after the proverbial honeymoon is over. That the Veloster remains a fabulous design which still looks totally fresh and exciting after four years of production is reason enough for its relatively strong continued sales – it outsells the Scion tC and FR-S combined, not to mention the Mini Cooper, the VW Beetle and others.