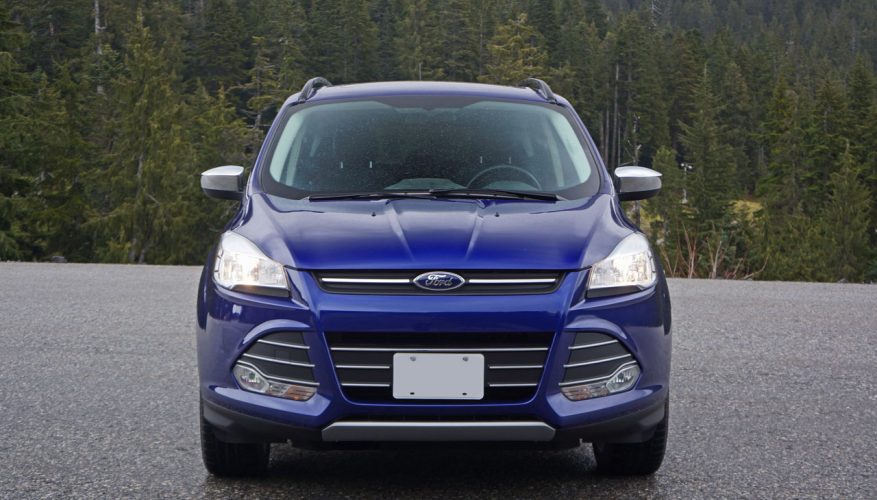 By: Trevor Hofmann
Ford enjoyed its best year of Escape sales ever in 2014, with 306,212 sold in the US and 52,198 finding new homes here in Canada. While the US total looks more impressive, Ford of Canada’s accomplishment was a much more significant feat. First off, on a per capita basis the Canadian consumer take-rate should be closer to 30,000 units, not 50,000-plus being that Canada has roughly 10 percent the population of the US. Even more impressive, the Escape ranks second in popularity south of the 49th, handily beaten by the Honda CR-V’s 335,019 sales last year, but a shocking 14,514 more Canadian compact crossover buyers chose the Escape over the CR-V in 2014. The gap widens further when comparing Toyota’s RAV4 or Nissan’s Rogue, the two next most popular compact CUVs available.

Also notable is just how much the Escape has grown in popularity over the last decade, its 2004 numbers just 183,430 in the US and 20,360 in Canada. A similar trend can be seen with its rivals, albeit lacking the same degree of sharpness in their growth curves, but just the same the entire compact SUV segment seems to be bursting at the seems.

Now in its third generation after replacing the more traditional SUV-like second iteration in 2012 as a 2013 model, the Escape no longer shares underpinnings with Mazda models, but rather was the brainchild of Ford’s European operations. Dubbed Kuga overseas, it is based on the brand’s Global C platform that’s also the basis for the current Focus, second-generation C-Max, and latest Transit Connect, not to mention the all-new Lincoln MKC.

There are a lot of reasons for the Escape’s sustained popularity. It’s roomy for the compact class, with ample space for five occupants as well as cargo capacity that leaves many of its competitors behind at 971 litres (34.3 cubic feet) behind the split-folding second row seatbacks and 1,920 litres (67.8 cubic feet) when those seats are folded flat.

Ford also spices up the Escape’s appeal by following a pattern used for its most popular F-150 pickup truck, variety. For starters there are three very fuel-efficient four-cylinder engine choices, two of which offer state of the art direct injection and turbocharging. The base transmission is a six-speed automatic with SelectShift manual mode, while both front- and all-wheel drive variants allow price and traction advantages. Pricing in mind, the least expensive S model starts at only $23,799 plus $1,690 for freight and pre-delivery prep, while the top-line Titanium trimmed version is comparable to many premium offerings despite its reasonable $32,299 price point.

While my SE tester is a mid-grade model, Ford gives it some nice premium touches. For instance, the upper grille has a chrome slat spanning its width while the lower grille and side vents feature three optional chrome slats apiece, the ones at each corner integrating standard clear fog lamp/turn signal clusters instead of simple orange blinkers on the base model. A nice aluminum-look centre panel finishes off the SE’s bottom section, similar to the aluminum-look diffuser panel on the back bumper, while attractively detailed headlamps, the same as offered on the base model, add to the upscale look. Additional high-end treatments include chromed engine vents on the front fenders, standard across the range, plus chrome beltline moldings across the window sills and dual chromed exhaust tips that are specific to the SE, all of the brightwork looking especially nice against the Deep Impact Blue metallic paint chosen for this example, but my particular loaner was kitted out with an SE Chrome Package responsible for the three chromed lower grille slats just mentioned, as well as chrome covering the otherwise body-colour door handles, mirror “skull caps” and liftgate applique, while the otherwise black roof rack side rails were also finished in the bright metal look. The exterior upgrades were rounded out by gorgeous 19-inch chromed wheels that replaced the SE’s usual 17-inch Sparkle Silver painted alloys, while the SE’s cloth seats were upgraded to fabulous looking partial leather sport buckets, not bad for only $1,350 overtop the SE 1.6 Ecoboost 4WD model’s base price of $28,499.

Additionally, more soft-touch synthetics than any competitor gives the Escape a premium-like ambience. The pliable surfacing covers most of the dash top and much of the instrument panel facing, right down to knee level on the left side, whereas the front doors get large soft upper sills as well as nicely padded inserts that form into comfortable armrests. Subtle use of chrome and satin silver trim spiffs up the cabin, while my tester’s digital displays were up to Ford’s usual high standards.

Ahead of the driver, nice bright primary dials are filled with white backlit numerals on black faces, while brilliant blue needles add a little fashion to their function. In between, a crystal clear full colour multi-information display provides digital speed readouts, distance to fill up, trip info, instant and average fuel economy, plus more, while the infotainment touchscreen on the centre stack packs in even more functionality, with phone, navigation, entertainment and climate controls set up in Ford’s intuitive quadrant layout. The audio system is excellent, incidentally, with nice bright highs and really deep bass tones, plus all the adjustability most could ever want for. Just below, the easy to operate dual zone automatic climate control added to the overall comfort of this model, only upstaged by five-way seat heaters that were downright therapeutic at their highest setting.

Front seat comfort is very good, with ample adjustability for the driver and plenty of hip, shoulder and headroom. Likewise, rear seat spaciousness is good even when the front seat is pushed to its rearmost position. I’m five-foot-eight, the size of a medium sized teenager, and there were a few inches in front of the knees and plenty of space above my head while I had more than enough room from my hips and shoulders to the door. Additionally, a comfortable armrest with twin cupholders pulls down between the two outboard seats if the centre position isn’t in use.

Ford hasn’t missed a beat when it comes to driving dynamics either. The Escape SE feels right at home on the road, whether darting in and out of heavy traffic, leisurely cruising the freeway or managing a set of twisting turns on the way up the ski hill, which is exactly where we took it for its photo shoot. No snow in sight, a slight sprinkle of rain allowed some sampling of its 4WD system when powering out of doglegged hairpins, something the 1.6-litre Ecoboost is especially capable of. The engine makes 173 horsepower on regular fuel or 178 when using pricy premium (I recommend the former as paying a 10-percent surcharge for a mere five horsepower advantage is hardly worth it), plus 184 lb-ft of torque from only 2,500 rpm, while the six-speed automatic shifts quickly and smoothly whether by its own devices where it upshifts quicker to reduce fuel consumption or via a handy thumb toggle on the shift lever to extract more performance and have a little more fun. You’ll need to pull back on the shift lever to select Sport mode first, and then each thumb-actuated shift snaps off with split second immediacy, really helpful when throwing the little ute through curves. This specially shod Escape really showed off its athleticism on my mountain drive by sticking to its lane even when pushed hard. The ride was excellent too.

There’s really nothing the Escape doesn’t do well, which gets me back to what was covered in the beginning of this review, how amazingly popular it is. Success doesn’t happen by accident, and the Escape is a compact CUV that’s worthy of every single one of last year’s 52,198 sales.
©(Copyright Canadian Auto Press)
Car Shopping Tools