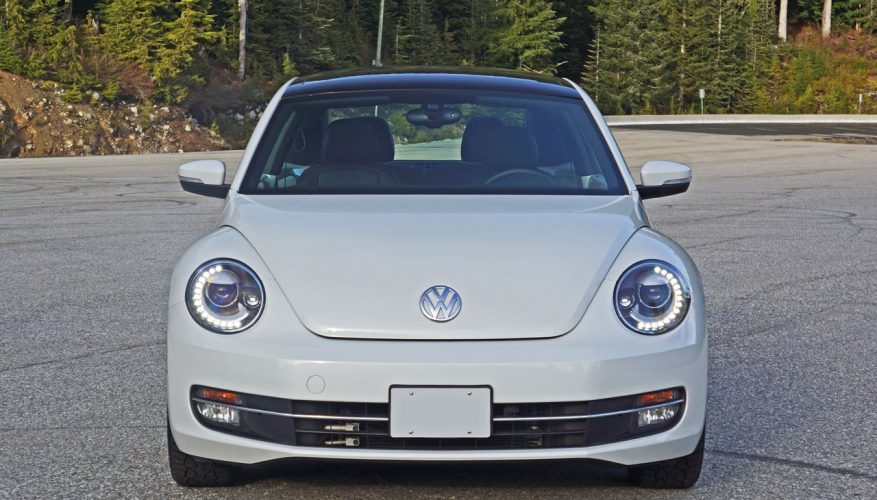 By: Trevor Hofmann
The iconic VW Beetle has long been a good car in search of a great engine, and with the advent of the impressive new 1.8 TSI its time has arrived.

Volkswagen has been stuffing its new direct injection, turbocharged 1.8-litre four-cylinder into every small car it sells, and the result has been strong performance combined with very competitive fuel economy. The Beetle 1.8 TSI puts out a formidable 170 horsepower and 184 lb-ft of torque while fully capable of achieving a five-cycle EnerGuide rating of 9.9 L/100km in the city and 7.2 on the highway when fitted to the car’s standard five-speed manual gearbox, or an even better 9.6 city and 7.2 highway rating when upgraded to the six-speed automatic.

Unlike the Jetta that still gets the old 2.0-litre mill in lower rung trims, the 1.8 TSI comes standard in the Beetle, and unlike the Jetta the Beetle’s base price is commensurately higher at $19,990 plus $1,395 for freight and pre-delivery prep. Just the same that’s quite reasonable for a sports coupe, and believe me when I tell you the latest Beetle certainly qualifies for sports coupe status. Peak torque arrives as low as 1,500 rpm and ebbs off after 4,750 rpm, so acceleration is strong no matter where you’re at in the engine’s rev range. I also love that at lower revs the new direct injection powerplant gives off a familiar percolating sound that’s remotely like air-cooled flat-four Beetles of the past.

While the sound certainly pulls memories of happier, simpler times of the past, even the early ’70s Super Beetle only produced 48 or 60 horsepower, depending on how it was being measured, and its handling was nowhere near as capable as today’s car. The new Beetle doesn’t feel quite as rock solid amid corners as the aforementioned Jetta or for that matter the brilliant little Golf, possibly because it’s so tall, but compared to most cars it gets measured up against it still manages curves with the level of nimble athleticism expected of a VW. I’m guessing the car’s standard all-season tires would help improve traction if they had been included, but instead my Comfortline tester’s upgraded split five-spoke 17-inch alloys were shod in a set of General Ultimax Arctic winters measuring 215/55R17. It’s good that VW erred on safety’s side, because most years we endure at least some snowy conditions on the West Coast, although this time around there wasn’t much snow to be found anywhere near Vancouver, the slight white dusting atop the local ski resort where we were shooting the Beetle only teasing skiing fans like myself.

It made a nice backdrop for viewing the latest Beetle. The car’s overall styling is carryover for 2015, although there’s nothing at all wrong with that. Today’s more masculine Beetle replaced the so-called New Beetle in 2011 as a 2012 model, and it’s been steadily refined since then. The 2015 model gets LED driving lights ringing the complex headlamps in Comfortline trim, a nice chrome strip across the wide horizontal grille, fashionably functional LED turn signals integrated within the mirror housings on all models, chrome-trimmed body moldings on the lower portion of the rockers that remind me of the original car’s running boards, sharp looking LED-infused taillights, and a sporty diffuser-style rear bumper cap that allows an exit for the twin chrome-tipped exhaust pipes. It’s a good-looking compact.

VW continues its retrospective theme to the interior where my Comfortline model replaced the stock black dash and door uppers with a painted body-colour finish that wraps right around to the ends of the rear quarter windows. It’s a rare occasion when I’m not complaining about the use of harder plastics for these surfaces, but this retro upgrade made me all smiles. On that note there aren’t many soft-touch surfaces in the Beetle’s cabin, other than the nicely padded armrests, leather-wrapped steering wheel, shift knob and brake lever, plus of course the impressively finished leather upholstery.

Leather is optional, by the way, something last year’s Comfortline package didn’t offer. There’s no Beetle Highline for 2015, so Volkswagen makes a $1,990 Appearance Package available for the $23,990 Comfortline that adds Vienna leather in Titan Black or Nutria Beige, plus wonderfully comfortable and supportive front sport seats, dual-zone automatic climate control, automatic HID headlamps with those LED DRLs I mentioned a moment ago, and LED rear license plate illumination. Additionally a $1,570 Technology Package added navigation, a great sounding 400-watt Fender audio system with eight speakers and a sub, plus blind spot detection. These two packages get added onto a Comfortline model that already features an impressive assortment of features, those not already mentioned include rain-sensing wipers, heatable windshield washer nozzles, cruise control, a powered tilt and slide glass panoramic sunroof with sunshade, and halogen fog lights.

I should probably give you a shortlist of features that get grandfathered up from the base Beetle Trendline too, including remote access via VW’s cool flip key, aluminum doorsill plates, powered windows with auto up/down all-round, power-adjustable and heatable exterior mirrors with those integrated turn signals I mentioned before, a tilt and telescopic three-spoke flat-bottom multifunctional steering wheel, Bluetooth hands-free with voice activation, cruise control, an eight-speaker AM/FM/CD/MP3 audio system with aux input, as well as competitive assortment of safety features such as four-wheel disc brakes with ABS, electronic brake-force distribution, hydraulic brake assistant, and engine braking assist, plus anti-slip regulation traction control, electronic stability control, electronic differential lock, hill hold assist, Intelligent Crash Response System (ICRS), and much more, not to mention every Volkswagen gets a premium-level four-year or 80,000 km comprehensive warranty and five-year or 100,000 km powertrain warranty.

The Beetle’s tall body allows for a lot of front row headroom, while shoulder, hip and legroom shouldn’t be a problem either. The rear seats are also roomier than I expected, with about two inches left over above my five-foot-eight frame and the same amount in front of my knees. Cargo carrying capacity is large and accommodating for the sport coupe class, with 50/50 split-folding rear seatbacks that fold down to expand the already large 436-litre (15.4 cubic-foot) trunk to 846 litres (29.9 cubic feet) of maximum volume.

That last point is important, as most of the Beetle’s sport coupe competitors offer very little luggage space and cram rear passengers into seats that seem more like afterthoughts than part of the original design. These of course offer more rakish lines than the fun-loving VeeDub, but the Beetle has enjoyed its decades of popularity specifically due to its ideal mix of performance and practicality, and of course our love affair with its retro styling.

I’d be amiss if I didn’t mention two additional Beetle models, especially being that the GSR was discontinued for 2015. While the addition of the standard 1.8-litre TSI engine transforms the little Bug into a modern-day Super Beetle, consider for a moment that there’s still a quicker 210 horsepower Sportline variant with a six-speed manual or six-speed DSG automated gearbox available, whereas the ultra-thrifty turbo-diesel TDI version won’t only give you great fuel economy, but it sounds even more like a traditional air-cooled Beetle than the 1.8 TSI.

However you outfit it, the 2015 VW Beetle delivers a lot of style and performance for a very affordable price.
©(Copyright Canadian Auto Press)
Car Shopping Tools