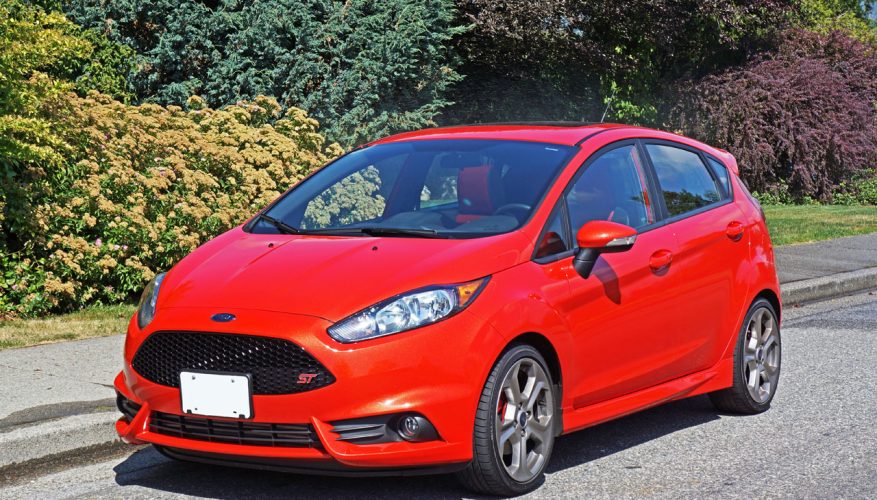 By: Trevor Hofmann
If you’ve got a craving for thrilling performance in a relatively inexpensive subcompact hatchback package you don’t have too many cars to choose from. There’s the quintessential Mini Cooper S and even more entertaining JCW version, now available in unorthodox five-door trim, the even more radical Fiat 500 Abarth that’ll quickly snarl and blat its way into any performance enthusiast’s heart, and the absolutely amazing Ford Fiesta ST, a car that demonstrates just how capable the blue oval gang can be when producing performance cars.

Just one look lets you know this isn’t just any run of the mill Fiesta. The base car’s lofty Aston Martin lookalike grille gets tossed aside for a more original opening featuring a sportier gloss black mesh insert, racy red ST badging, and a deep F1 wing-inspired air dam incorporating circular fog lamps at each corner, the look a great deal more enticing than the base car’s exoticar wannabe appearance. Don’t get me wrong, we all found humour in old Volkswagen Beetles donning Rolls-Royce frontal hardware and the odd Lada sporting twin kidneys ahead of its slab-sided bodywork, but those of us who appreciate Ford for the storied brand it is would rather see its cars display grille designs that are unique to the marque, rather than the ovoid Jaguar-influenced designs of Taurus and Contour models past, obvious Land Rover overtones in Dearborn’s SUV lineup, and imitation Newport Pagnell heritage smeared across the faces of common economy cars, but I digress. The ST wears its better looking, more uniquely penned front fascia proudly, a look that I hope will trickle down throughout the entire Fiesta line, while bold side skirts, a massive rooftop spoiler that’s better described as an aerofoil wing, and an aggressive rear diffuser with black mesh insert spans the lower rear valance. It’s an intimidating looking machine for something so small.

The Fiesta ST gives Ford’s performance car fans another good reason to be proud of their brand, others being the fabulous Focus ST, much loved Mustang and supercar-trouncing Shelby variant, not to mention the upcoming GT, a true supercar. I think it’s safe to say we’d all love some seat time in that latter $400k-plus GT40-inspired track star, or for that matter even a $60k Shelby Mustang, and while these two satisfy the need to constantly sew the seeds of brand awareness while further strengthening the pride of loyal Ford fans, the two hatchbacks bring very real performance into the realm of commoner status, not to mention real-world practicality.

It’s a conventional hatchback first and foremost, capable of swallowing up loads of cargo when the 60/40 split rear seatbacks are lowered and delivering true comfort in four of its five positions, even for taller folk, but that’s not the real reason for paying $9,600 over the base $15,349 Fiesta S model. Along with the styling enhancements, the $24,949 Fiesta ST gets transformed into a performance beast, its direct injected and turbocharged 1.6-litre twin-independent variable-cam timing infused Ecoboost four-cylinder pumped up to produce a soul stirring 197 horsepower and 202 lb-ft of tire spinning torque. That’s jaw-dropping power for a 1,244-kilo (2,742-lb) subcompact, let alone one that’s capable of 8.9 L/100km in the city, 6.8 on the highway and 8.0 combined, the result being downright silly point and shoot acceleration along with lock ’em up and throw away the key highway passing power. A slick six-speed manual is the only transmission, a fact that will immediately weed out poseurs in order to the keep the car in the hands of those who are at the very least willing to learn to drive stick. If you don’t already know, take my word, you’ll want to grab courage by the scruff of the neck and figure it out, because you’re missing out on one of the most intoxicating cars on the street.

The short-throw six-speed shifts effortlessly and clutch take-up is near perfect, causing a shifting for the sake of shifting phenomenon that few cars encourage. Or maybe it’s the sound of the raucous little four ahead of the firewall or burbling exhaust popping and crackling from behind that had me mixing the centre lever so much? I can’t say for certain. All I know is that all other cares immediately left my cerebral cortex, the immediacy of the moment taking control of every thought process resulting in a blissful state of being. Transcendental? Possibly.

The ST’s electric power-assisted steering is extremely direct, the ride ultra firm to the point that each and every pavement irregularity transfers through its MacPherson strut front and twist beam rear suspension. Cornering capability is sharp no matter if tackling downtown traffic or bending it through a set of S curves, whereas the upgraded four-wheel disc brakes with high-performance pads bite down into tarmac with surprising strength. I’ve got an inkling the ST would be a smart choice for amateur rally racing too. It’s not as if the blue oval brand isn’t familiar with off-roading, its Cosworth-powered WRC cars of yore reminiscent of this hot hatch, the ST infused with Ford’s impressive AdvanceTrac Electronic Stability Control and Torque Vectoring Control (TVC) systems for maintaining grip no matter the road conditions.

The 205/40R17 Bridgestone Potenzas at each corner aren’t massive, but then again they’re large for such a small car. My tester’s Rado Grey painted Y-shaped five-spokes look good, and big aforementioned discs nicely complemented by sporty red calipers. My tester was sprayed in a matching coat of Race Red, although the Tuxedo Black painted ST I tested last year looked more menacing and a few other colours might do a better job of highlighting its blacked out bits and uniquely shaped lamps front and rear, Oxford White and Green Envy immediately coming to mind. I’d like to see it in Performance Blue too, not to mention Molten Orange. The orange and green hues add $550 to the bottom line whereas regular metallics increase the ST’s price by $200, either upgrade a small price to pay for the looks garnered.

The only options are the Rado Grey paint on the same set of 17-inch alloys, a $500 charge, a pair of “Over The Top” racing stripes for $495, a $475 ST Protection Package that adds all-weather floor mats, a cargo area protector and a car cover, a $115 Cargo Management Package featuring a cargo net and soft foldable cargo organizer, a $1,200 powered moonroof, and lastly an $800 Sync navigation system.

You don’t need navigation to appreciate the standard MyFord Touch infotainment display, mind you. I love the way it intuitively separates functions into quadrants, while it’s filled with almost every type of functionality. Then again, in a car like the ST it would be great to be able to time laps, measure G ratings, etcetera, features other performance cars offer, but many of these aren’t as refined inside. ST could just as easily stand for soft-touch, its dash top a nice pliable synthetic that is rare in the subcompact class, while the door uppers and most other surfaces are covered in a high-quality harder plastic. Access comes via proximity-sensing remote followed up by a pushbutton ignition system, just another feature that’s unusually welcome in this small car segment.

Unusually welcome sums up the Fiesta ST. It’s a surprising yet wonderful addition to a subcompact segment that is otherwise almost completely devoid of excitement, excepting the two super subs mentioned earlier. The Fiesta ST sets itself apart with a near surreal level of performance that truly must be experienced to be appreciated, and that it can be had for under $25k is true power to the people.
©(Copyright Canadian Auto Press)
Car Shopping Tools