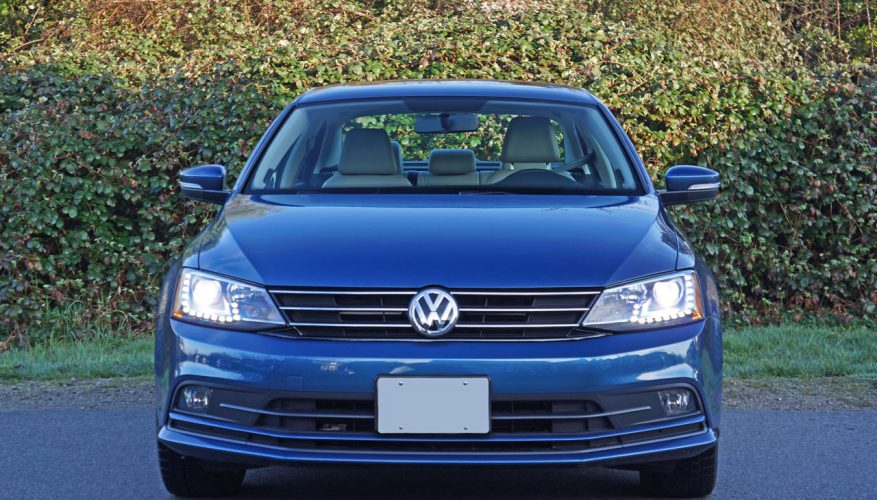 By: Trevor Hofmann
Volkswagen didn’t need to do much with this year’s mid-cycle update to make the Jetta any better looking; some tweaks to the front fascia, updated taillights, and reworked interior trim with new standard infotainment being all that was required. After all, why dramatically change a good thing? Its many fans have spoken with their wallets and the vehicle’s strong sales show that they like the styling direction VW is on.

Last year’s 31,042 Canadian sales made it the best year ever for the long-running compact model, with deliveries coming very close to doubling over the last 10 years. By all indications the trend is rising, so it could very well be another banner year for Jetta.

I certainly understand what all the fuss is about. Its 2015 Jetta Trendline starting price is only $14,990 plus $1,395 for freight and pre-delivery prep, and while it comes with the weakest engine in the compact class at just 115 horsepower and 125 lb-ft of torque, VW doesn’t charge any extra for metallic paint (yes, Volkswagen is still a German company), its base interior is pretty nice, suspension is fully independent with a multi-link setup in the rear, and braking system includes ABS-enhanced discs all-round with the added advantage of standard electronic brake-force distribution, hydraulic brake assistant, and engine braking assist, plus the usual count of six standard airbags is joined by yet more active safety features such as electronic stability control, anti-slip regulation traction control, an electronic differential lock, and Intelligent Crash Response System (ICRS). It all contributes to a car that delivers excellent handling in all weather conditions, if not particularly stellar acceleration. What’s more, moving up from the five-speed manual to VW’s excellent six-speed automatic only costs $1,400, making the entry-level Jetta a serious bargain when compared to domestic North American, Japanese and Korean competitors.

It’s hardly barebones either. Bluetooth hands-free with voice activation is now standard, as are powered windows with one-touch auto up/down all-round, central power locking, cloth upholstery, a three-spoke tilt and telescopic multifunction steering wheel with cruise and audio controls, and even a rearview camera integrated into the four-speaker touchscreen display audio system that includes an aux input, satellite radio, and throwback six-disc CD changer. The standard list goes on with dual vanity mirrors, a handy sunglasses holder, an immobilizer theft-deterrent system, and daytime running lights, plus VW won’t charge you extra to make the most of the Jetta’s extremely large 440-litre (15.5 cubic-foot) trunk, as 60/40 split-folding rear seatbacks are now standard fare and my tester even included an additional centre pass-through for loading long items like skis down the middle while both rear outboard seats are in use. Last but hardly least is a premium-level warranty spanning four years or 80,000 kilometres instead of the usual three/36,000, with the normal five years or 100,000 km covering the powertrain.

As good as it is you won’t see too many base Trendline models on VW dealer lots, being that most Jetta buyers want the remote access, air conditioning, Media Device Interface with iPod and upgradable USB connectivity, and heatable front seats that come as part of the $2,700 Trendline + upgrade, not to mention body-colour mirror caps so they don’t look like budget conscious cheapskates. Those mirror caps look especially dressed up thanks to integrated LED turn signals, while they also get remote powered adjustability and heatable functionality, whereas heatable washer nozzles will be appreciated in colder climes and the Trendline + interior features nicer checkered chrome trim. Additionally, when Trendline + buyers upgrade to the aforementioned six-speed automatic they also get VW’s famed Tiptronic manual mode, making the driving experience much more enjoyable.

Speaking of having more fun behind the wheel, another step up the Jetta ladder will get you into the new for 2015 Trendline + 1.8 TSI, which while adding sportier black to the wider looking restyled grille instead of the standard chrome (yes, the new grille is one of the changes for 2015, along with a very classy redesigned bumper and lower fascia), also includes an adjustable front armrest with storage, illumination to the vanity mirrors, and replaces the standard hydraulic power-assisted rack and pinion steering with a more efficient electromechanical speed-sensitive power steering setup, plus the pièce de résistance, VW’s fabulous new direct injected and turbocharged 1.8-litre four-cylinder engine upgrade.

Such was the basis of my Jetta 1.8 TSI SE Highline tester, Highline being the trim positioned two levels above the comparatively proletariat Trendline + featuring the same powertrain, but with performance that’s spot on. The Highline bypasses the Comfortline trim level although it still includes many of its upgrades including chromed exterior window trim, a leather-wrapped steering wheel rim, shift knob and handbrake lever, chrome tipped window switches, dual-zone electronic climate control, an additional two speakers for the audio system, front reading lights, a powered tilt and slide moonroof with sunshade, and an eight-way front passenger seat with manual lumbar support and lockable head restraint, while the top-line model adds a six-way powered front driver’s seat, leather upholstery, Iridium brushed metallic interior trim (like), new glossy piano black lacquered surfacing on the centre stack and surrounding the shift lever (don’t like – too hard to keep clean, it scratches easily and it’s late to the oh so trendy party), chrome rings around the primary gauges, a multifunction display between the tachometer and speedometer, proximity-sensing keyless access with pushbutton ignition, a remote garage door opener, ambient interior lighting, a cooling glove box, fog lights, 17-inch alloys wrapped in 225/45 R17 all-season tires, and new for 2015, blind spot detection with rear cross traffic alert plus forward collision warning. That’s a lot of kit for an accommodating compact that only costs $25,990 or $27,390 with the autobox, the latter being how VW equipped my tester.

As mentioned it’s an impressive transmission, not the latest, greatest eight- or nine-speed gearbox, but six forward gears is still something to talk about in the compact class, as is its so-equipped Tiptronic manual shift-mode. Don’t go hunting for paddle shifters until you’re willing to step up to the top-line Jetta GLI, but pushing and tugging the shift lever provides a more engaging driving experience.

All said the enjoyment factor has more to do with the aforementioned optional engine, the wonderful little four-cylinder putting 170 horsepower and 184 lb-ft of torque down to the front wheels for lickety-split acceleration and highway passing performance galore. The Jetta tracks beautifully on the open road too, and when that straight line starts to wind its German heritage shines through with deft handling and confidence inspiring stability. Likewise, braking power is superb for the class, the Jetta responding well to repeated application even while I pushed hard down a favourite mountainside road, a process that immediately weeds its competitors from the go-fast mix. Yes, the Jetta remains the serious driver’s car amongst low priced compacts.

As sporty as it feels the Jetta delivers a nice comfortable ride whether cruising the highway or zipping in and out of inner city traffic. That’s where you can really appreciate its interior. It’s a mix of high-end detailing and lower end finishings, the dash top a single piece of premium-like soft-touch synthetic that wraps write down the sides of the centre stack where it meets up with harder textured plastic for the lower console that encompasses the starter button, shifter, handbrake lever and centre storage bin/armrest, the latter three components leather-wrapped and nicely stitched for a high-end look and feel. The lower dash and glove box lid is made from the harder stuff too, whereas the door uppers and lowers are paneled with a single piece of hard plastic that doesn’t look all that rich due to a glimmering sheen in sunlight, while the semi-pliable door insert adds a slightly more respectable albeit rubbery surfacing, and padded leatherette armrests are downright comfortable.

My tester’s flat-bottomed steering wheel is a rare thing of beauty, especially its superbly crafted leather-wrapped and stitched rim, beautifully thin spokes integrating high-quality switchgear, plus nice aluminum and black glossy detailing. Continuing in the realm of higher end premium finishings, the Jetta’s front roof pillars are wrapped in the same nicely woven material as the headliner, while the supple leather covering each seat provides a truly upscale look and feel. They’re comfortable too, with decent lateral support and very good lumbar support, while the Jetta’s overall roominess front and back is one of the car’s selling points.

Adding to the premium experience is a no-cost optional cream-coloured Ceramique interior motif, an elegant match to my tester’s Silk Blue metallic paint. Surfaces that would otherwise be trimmed out in Titan Black, such as the lower dash and glove box lid, door panel inserts, roofliner, pillars, and seat upholstery get the milky vanilla soy treatment.

My loaner was also upgraded with a $2,495 Technology package that added navigation and a 30-gig hard drive to the infotainment system, an eight-speaker Fender audio upgrade that’s especially good for those who prefer deeper bass tones thanks to a booming subwoofer, and wonderfully bright adaptive HID headlamps with cool looking J-shaped signature LED DLRs.

Another key Jetta selling point is its fuel economy, my automatic tester slightly better than the five-speed manual’s 9.3 L/100km city, 6.3 highway and 8.0 combined five-cycle EnerGuide rating, with a claimed 9.3, 6.3 and 7.9. Considering this engine’s performance advantage, its fuel-efficiency improvement over the base 2.0-litre four is impressive, likely aided by new optional active grille shutters that improve aerodynamics. The base model achieves a claimed 9.5 city, 6.9 highway and 8.4 combined with the manual and 10.4, 7.0 and 8.9 in automatic guise, while those who spend a lot of time behind the wheel will want to seriously consider the optional 2.0-litre turbo-diesel TDI model due to its fabulous 7.7 city, 5.2 highway and 6.5 combined rating when outfitted with its standard six-speed manual or 7.5, 5.3 and 6.5 rating with the automatic. Diesel is currently quite a bit cheaper to purchase than regular unleaded, at least where I reside, although neither gasoline powered Jetta forces you to upgrade to pricy premium.

From overall efficiency to driving dynamics, styling enhancements to new standard and available features, the attractively priced 2015 Jetta gives its ardent followers even more reasons to stay loyal while offering an impressive alternative to those who’ve become bored with some of the compact segment’s bigger sellers. It’s a competitive class for sure, but Volkswagen brought the right stuff to this latest Jetta upgrade.